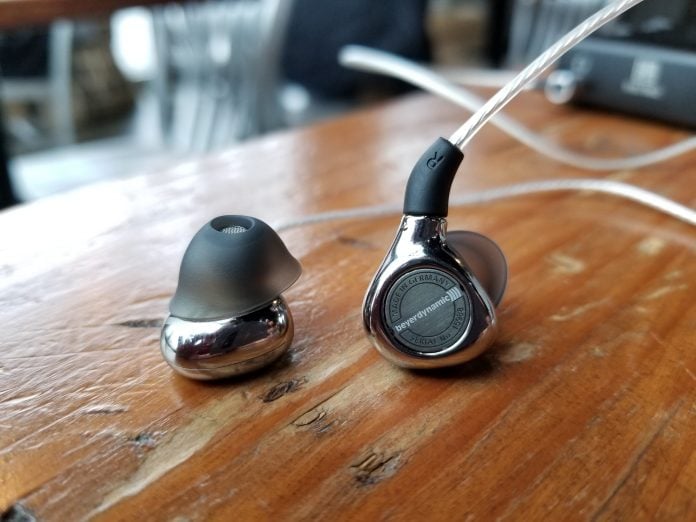 Chances are that if you’ve done some headphone research, you’ve heard of Beyerdynamic. The long-standing German audio manufacturer isn’t necessarily mainstream but well recognized in the audiophile community, with numerous classics to its name. The company’s latest on-goings in the pursuit of perfected audio is its home-brewed Tesla driver. It debuted in the Tesla T1 over-ear flagship and proved to be a force to be reckoned with. Hence, Beyerdynamic wasn’t going to stop there.

The motto for the Xelento are “An audible piece of jewelry”, and rightly so.

Finding that it was lacking in an in-ear flagship, the company went to work. But to have an earphone with performance that could stand up with its larger brethren, it had to have as capable as technology. Yes, Beyerdynamic made the excellent decision to attempt to miniaturize its prized Tesla driver, and it succeeded – meet the Xelento Remote. 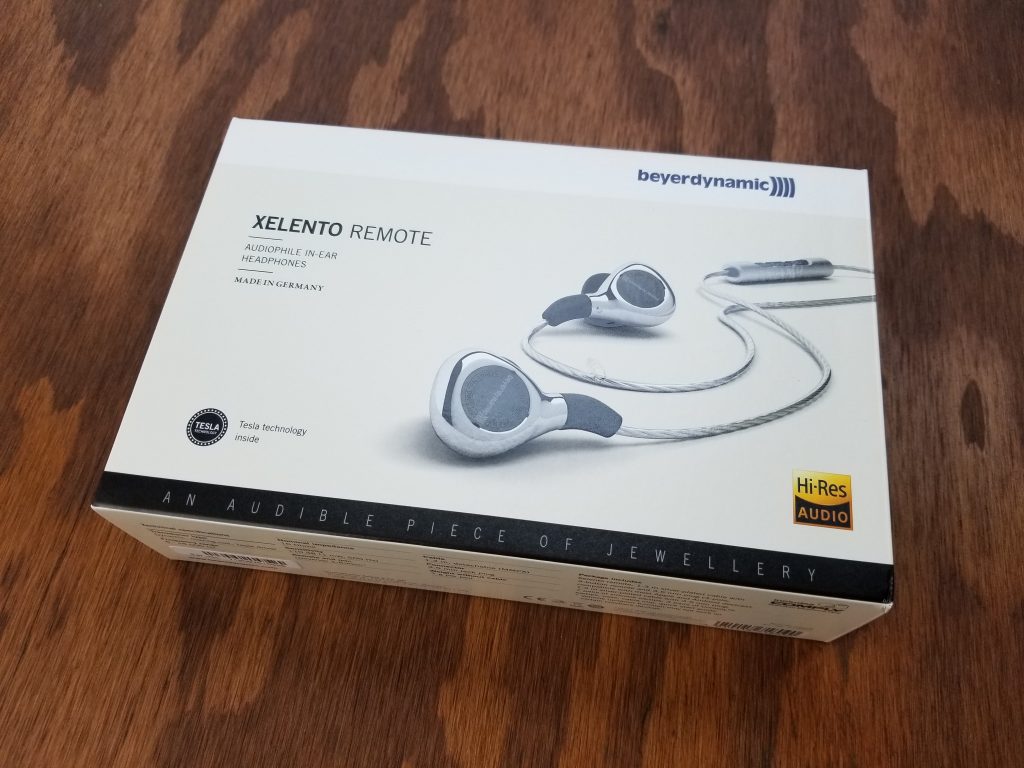 Generally, Beyerdynamic headphones have a distinct aesthetic but aren’t really flashy or exotic in design. The company lets the material, construction, and attention to detail do the talking, rather than something that will turn heads. Interestingly enough, the Xelento push on that philosophy, as the earpieces are enveloped in a shiny facade.

The motto for the Xelento are “An audible piece of jewelry”, and rightly so. The metallic sheen matches that of polished silver jewelry. Many times with these expensive earphones, buyers don’t really get their money’s worth in design, so we welcome Beyerdynamic’s slick presentation in that respect.

But it won’t be everyone’s style. Still, we’d argue it shouldn’t detract. The brushed metal cap on the outward surface of the earpieces provides a substantial contrast (which is also largely what you see when the earpieces are in your ears) and the cue needed to depict a “Beyerdynamic” headphone. 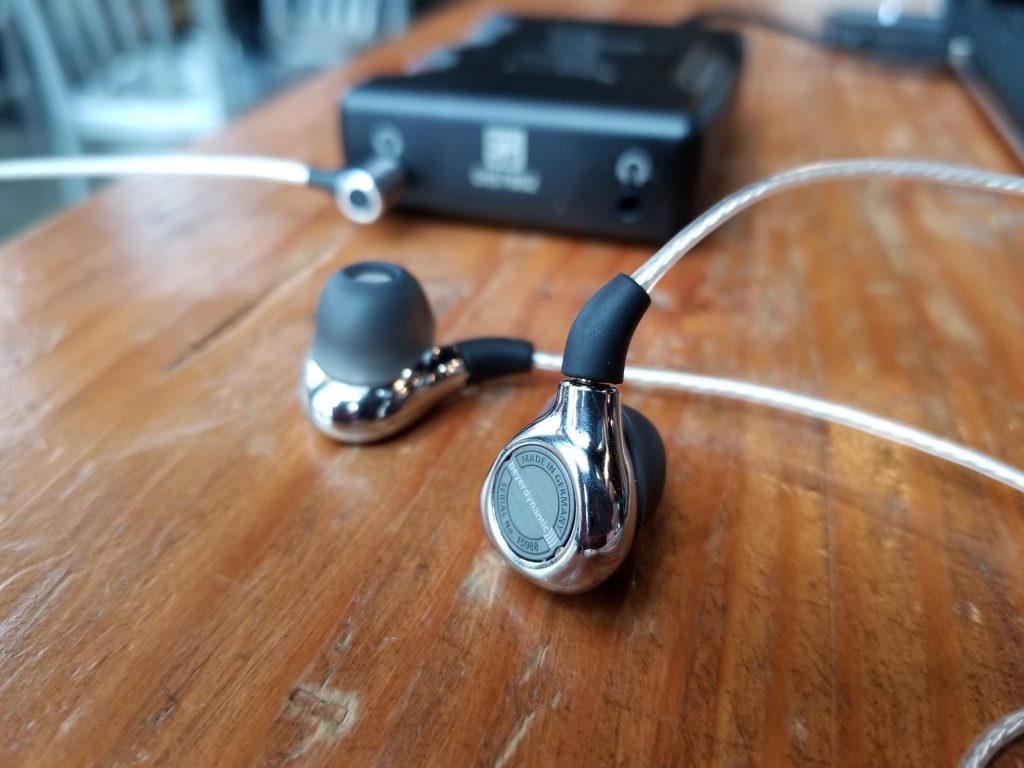 However, you get a different story in-hand. The silver chassis feels more like plastic than metal. But not low quality by any means. It may be a point of contention when you’re investing close to $1K on audiophile-class earphones, but bear in mind that the driver shell does affect audio output, and Beyerdynamic may have strategically chosen this material because it’s better for the ultimate result.

Some high-end headphones sometimes put everything into the audio development and earpieces, but not enough focus on the cable. This isn’t the case here. The Xelento have the best cable we’ve used in any earphone. It’s robust, thin, and as pretty as the earpieces themselves. The translucent shrinkwrap shows silver twisted wires, and the Y-splitter, chin slider, and 3.5mm jack are all brushed metal (real) bits.

The “Remote” in the Xelento’s name implies that it’s smartphone-friendly, unlike many of its class. In the stock cable, you’ll get a three-button control unit with microphone for quick functions on the connected device. There are volume up and volume down, and the middle button primarily pauses/plays but can also move forward and back in tracks.

Weirdly, while double pressing moves to the next track, you hold down the button to move back (at least, on my Android phone). And I don’t see a way to toggle Google Assistant. Typically, holding down the middle button would toggle the virtual assistant and three presses would go to the previous track. If you don’t care about the remote, Beyerdynamic generously includes an extra cable in the box that excludes it. 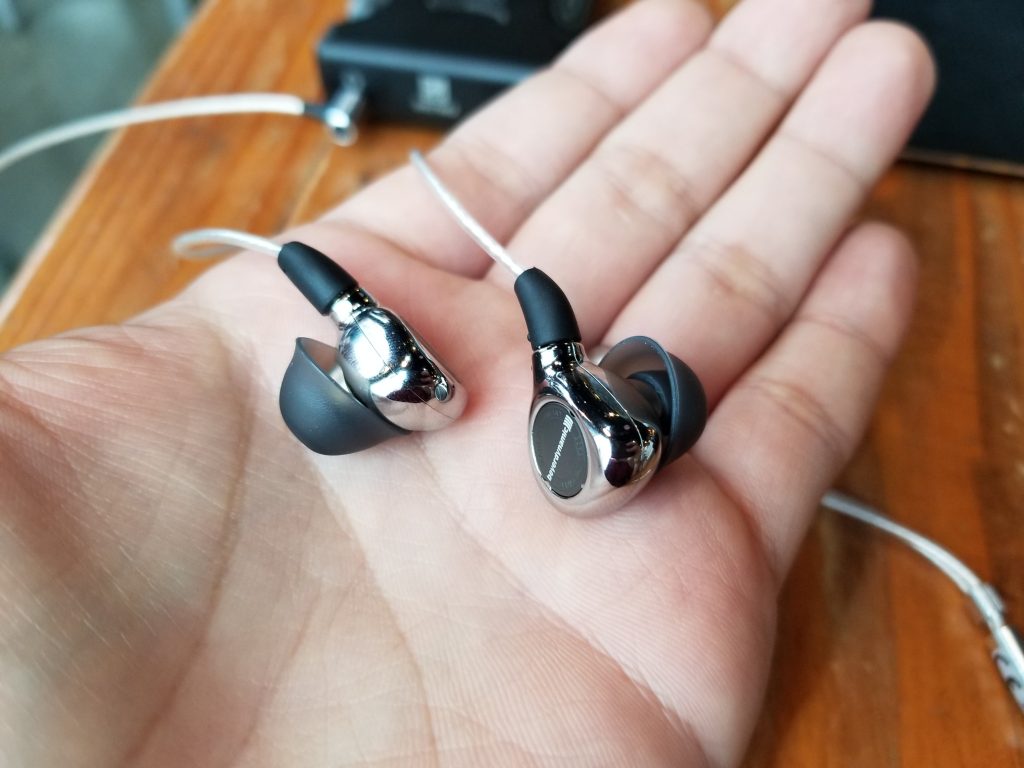 The wear of the Xelento follows the around-the-ear convention like many of its class. Donning isn’t as convenient as just simply sticking the thing in your ear (rather, you have to orient the earpiece, stick it in, and adjust the cable up and around your ear), but the benefit becomes clear after some use. It’s a much more secure fit and eliminates microphonics noise.

The Xelento’s silicone tips are rather unique. They’re shallow and have this bell shape to them. It makes sense with respect to the design. The shallow nozzles don’t go deep in the ear canals, so widening the eartips helps make sure that you get an appropriate seal. 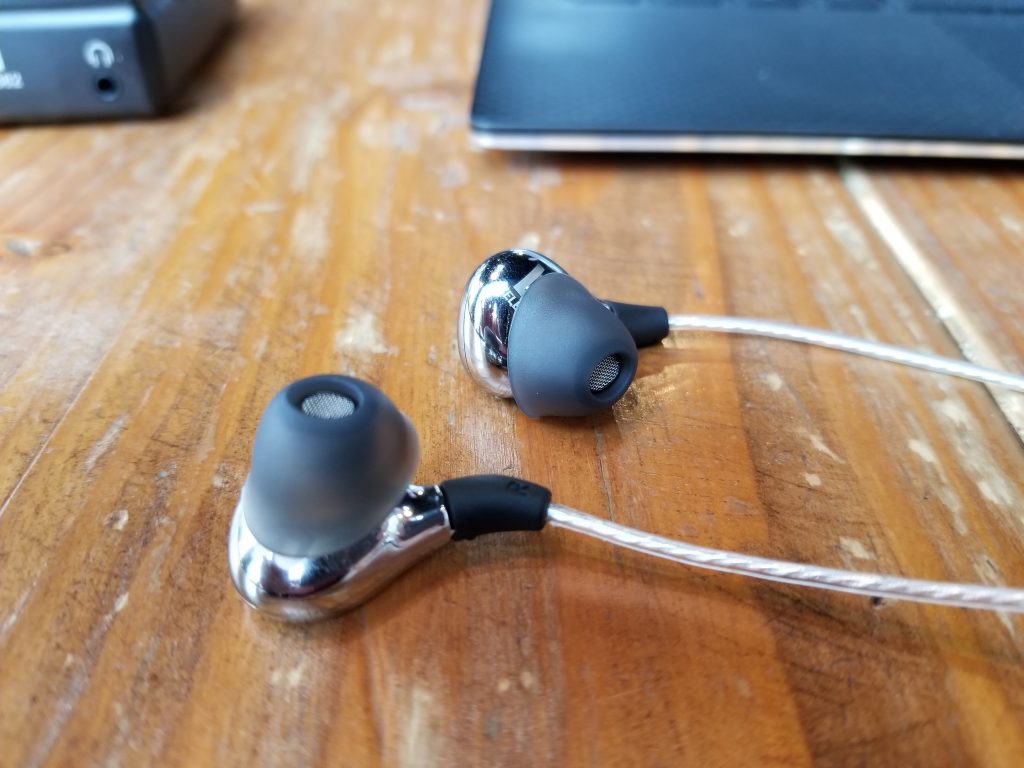 Unfortunately, this isn’t the best approach with regard to isolation (which benefits from going in as deep as possible). The Xelento’s sound isolation isn’t bad, per-se, but it’s average-ish. Thankfully, Beyerdynamic includes foam tips in the box for those times you’d struggle with noise.

Despite being thin, the rubbery makeup of the cable notably resists tangles. We can see that Beyerdynamic didn’t overlook any details. The only drawback (but minor) is that the rubbery material has a springy nature. So depending on your posture, the cable may not want to fit perfectly around your ear. The chin slider is there to assist in keeping things tightly in place, but even still, the cable will have some movement when you turn your head (but shouldn’t pop out off your ear). 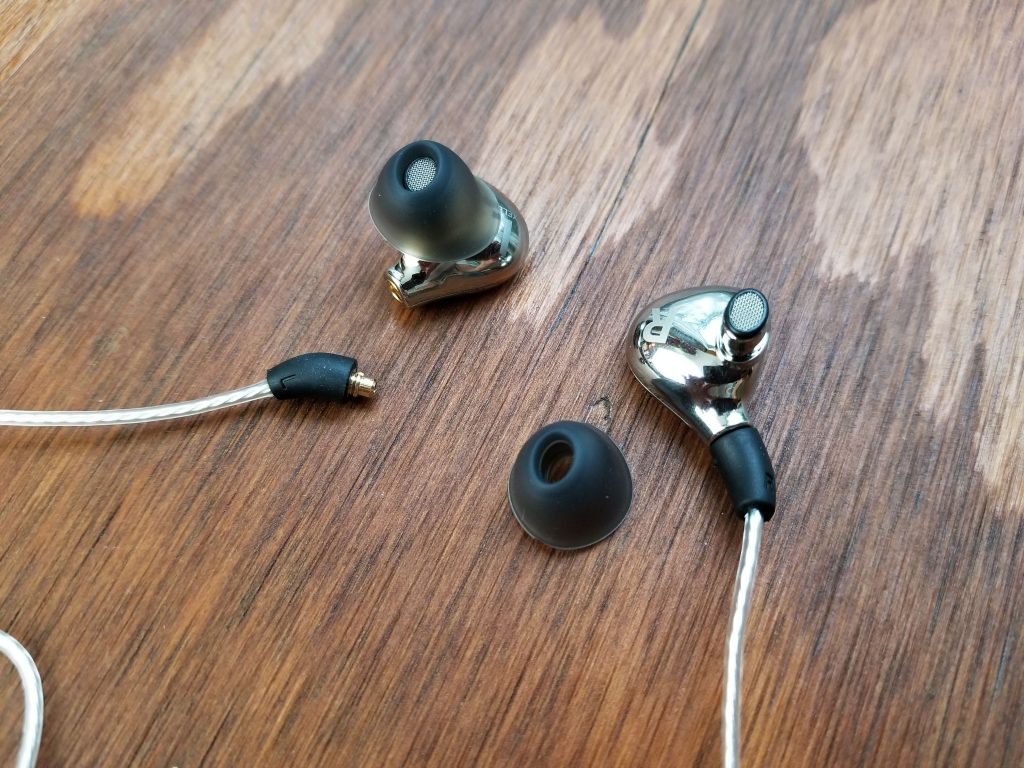 Like many earphones of this class, Beyerdynamic also made the Xelento detachable from the cable (using the common MMCX connector standard). This is always appreciable, especially under the consideration of protecting your investment. Cables can fail, and replacing the cable is much better than having to buy the whole thing again. You also get the freedom to switch to a third-party cable if desired, like if you wanted the capability for Balanced output.

Beyerdynamic’s attention to detail also included the packaging. We liked how the unboxing presentation first started with a simple showcase of the most important part of your purchase – the earpieces. Then digging in shows a barrage of eartips and other high-quality accessories.

I dived into the sound review of the Xelento having little idea of what to expect. I haven’t gotten a chance to hear Beyerdynamic’s preceding Tesla T1 headphones for reference, but have briefly auditioned the company’s initial attempt at this earphone, the T8iE, which was a collaborative effort with Astell & Kern. I loved the airy, energetic, and full-bodied sound of that earphone. I have also heard a couple of other well-received in-ears at this price range.

Technically being a variant of the Astell & Kern partnership, and boasting the same Tesla driver technology, it’s natural that I can hear some of the same qualities in the Xelento. But I think it’s for the better that Beyerdynamic has full reigns of the tuning with the Xelento. The T8iE leaned on a warm sound signature (accentuating the bass response) where the Xelento is noticeably more balanced. Well, balanced except for the heightened sub-bass.

The sub-bass is no doubt the signature element of the Xelento, and the first thing you’ll most likely appreciate. Now, I’m not talking about some bloated, head-shaking bass tuned to satisfy bassheads. It is weighty and hits hard, but as much as it is impactful it is controlled and superiorly defined. When the low-end bass parts of a track hit, I’m sure not just audiophiles will be able to really appreciate how much body is there. It demands your attention, making it easily to recognize the magnitude of depth and dimensionality it’s able to convey. Not exaggerating; it’s that good.

This kind of implies that Beyerdynamic didn’t aim to make the Xelento exactly a “reference” earphone, but we feels it lands a fantastic balance between energy and accuracy. Everything above the sub-bass range sounds mostly on the same level, with mild waviness. At first, we felt like the mid-bass range was a bit light, and while it is compared to a midrange-forward earphone like the Shure SE846, we wouldn’t really deem the Xelento a V-shaped signature. We think it’s a perception issue. The mid-bass doesn’t have quite the vigor that the sub-bass has, and since they’re back-to-back, the pair can come off as mildly disjointed. But in actuality, the mid-bass has just as good definition and an authoritative presence. We’d suggest Beyerdynamic to smooth out the transition next time.

We hear a little more strength (mildly) as we move to the mid-range. Unlike the Sennheiser IE 800 (a direct German-made single dynamic driver competitor), the mids don’t dip and lose impact. In fact, we really appreciated how airy and spacious vocals sound. This is another area where the Xelento punch above their in-ear weight, as it’s where you really appreciate the dimensional dynamics of the different sounds.

Separation and clarity are certainly where they should be at, at this price-point. Same goes for soundstage, which isn’t super wide but a decently spacious oval shape around the head. The treble follows a similar quality and presence of the mids. It’s extension (that high frequency sparkle) is noteworthy, but it’s not a peaky or fatiguing reproduction. The treble is smooth nature to it, in which it trades a little listenability for that sharp clarity you’d find in few earphones, like the Sennheiser IE 800. Overall, the Xelento make it easy to analyze and appreciate the details you may have been missing in your favorite music. 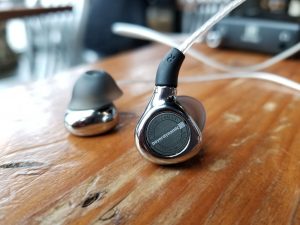 It’s a critical decision when you’re spending this much on a pair of headphones. There are actually more in-ears at this price-point than you’d think, and plenty that well surpass it. But we’d say that you’re at a good place with Xelento in the grand scheme of things. Every aspect of it is solid, from the unique, eye-pleasing design and spot-on construction to the comprehensively proficient acoustics. The Xelento is more evidence that Beyerdynamic’s Tesla driver is a pivotal achievement.