Over the past couple of years, we’ve all spent a lot more time at home due to the pandemic. During that time, I rediscovered my childhood hobby of building Lego sets to help pass the hours, and turns out, it’s a great stress reliever as well.

While Lego offers a large variety of sets already for children and AFOL (Adult Fans of Lego) already, I soon began to branch out looking for models that combined my other interests with my newfound hobby.

Enter Bricker Builds, a company that designs and sells instructions for building life-sized Lego sculptures based on popular movies and video games. The first time I saw one of their designs, I immediately fell in love and knew I had to build it.

After browsing the Bricker Builds site, I soon found several more models I loved and knew I’d be saving up to buy in the future.

Full disclosure, even though I have previously purchased from Bricker Builds, the model below was provided by the company for a fair and unbiased review.

The Bricker Builds website offers a variety of Lego sculptures based on some of the most popular movies and video games around, all designed by master Lego builders. The selection includes characters such as Darth Vader, Master Chief, Boba Fett, Spider-Man, and more. There is even a collection of iconic weapons, including Thor’s hammer Mjolnir, Captain America’s Shield, and a Hero’s Sword inspired by Link’s Master Sword from Zelda.

Once you’ve chosen the set you want to buy, Bricker Builds provides you with two options for purchasing. The first, conveniently bundles the instructions and all the Lego bricks you’ll need to complete the build. While the second option, includes the instructions and a parts list, which comes in an XML file ready to plug into Brick Link for purchasing new or used Lego pieces for the sculpture. Bricker Builds even made a tutorial video to make acquiring the bricks yourself as easy as possible.

As you might have guessed, the bundle is often the most expensive option. This Spider-Man No Way Home Bust will set you back $650 for the instructions plus bricks, but it’s also the easiest most trouble-free way to get everything all at once. Choosing the instructions and parts list option is much cheaper at only $45 for this build, however, then you’ll have to buy the bricks separately. 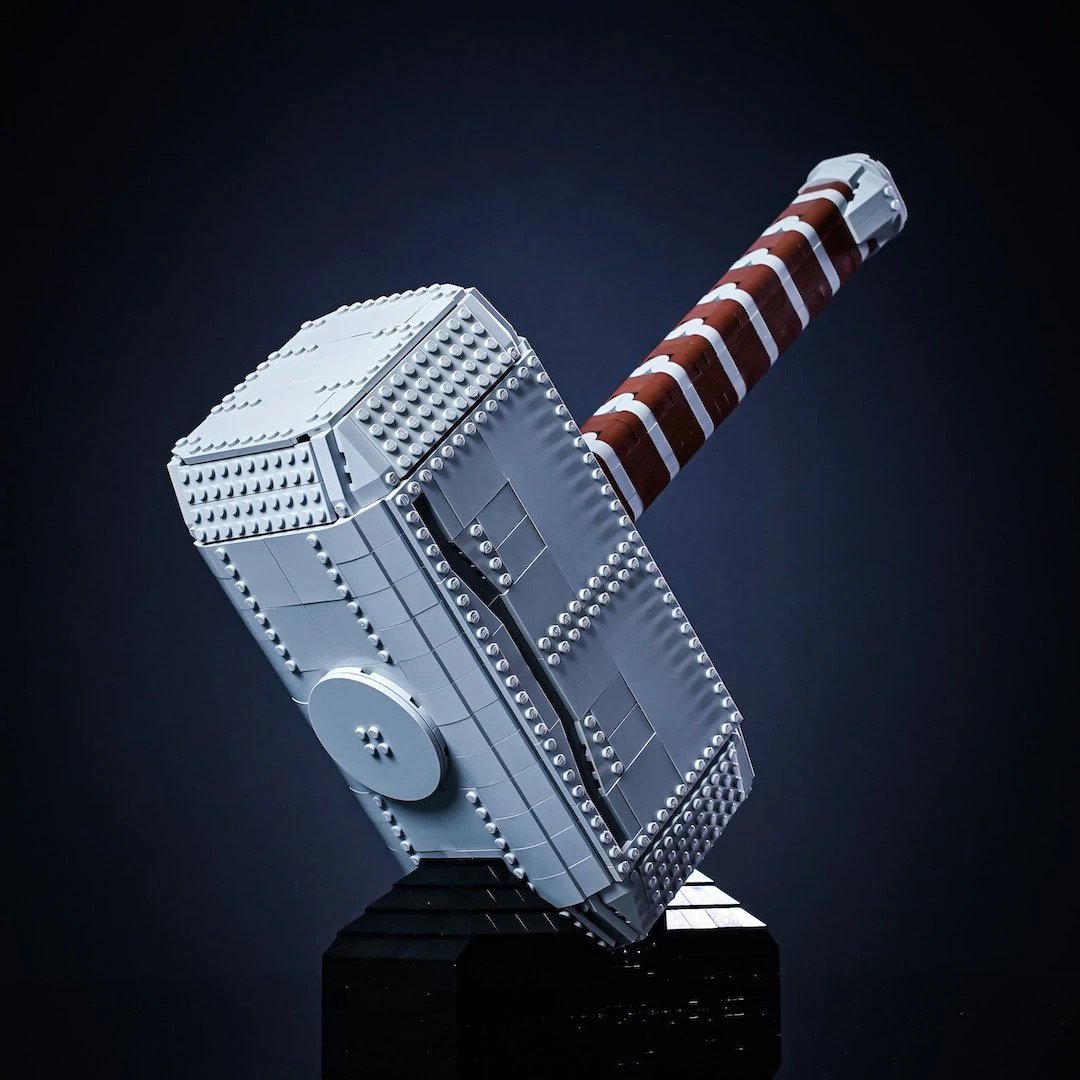 When trying to decide, Bricker Builds is willing to assist by providing a parts list allowing you to compare prices to see if it’s worth sourcing the parts yourself. All you have to do is email the fantastic support team and request it.

If you’re finding the price to be a little hard to swallow, then you might be happy to know that you can split the total into multiple interest-free installments, with payments due every two weeks.

After you’ve placed an order, Bricker Builds sends out an email confirming everything and with links to download the PDF instructions and parts list for your model. All that’s left to do, is wait for your box of genuine Lego bricks to arrive, or to start pricing out and purchasing the bricks on your own.

What comes in the box? 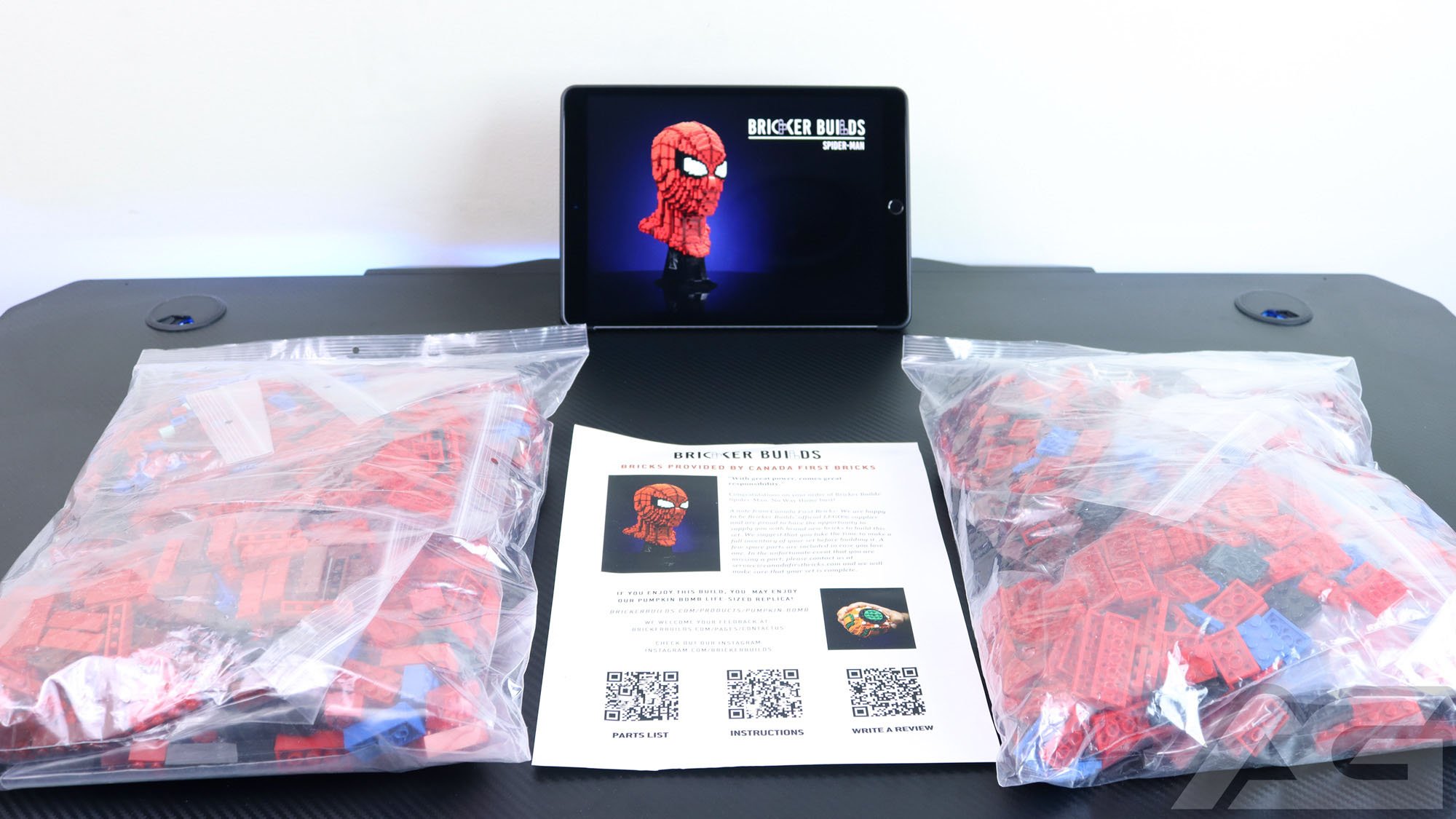 With the Spider-Man No Way Home set, the box came packed with a printout with QR codes to download instructions and the parts list, as well as 2 large re-sealable zipper bags stuffed with several other smaller zipper bags containing the Lego pieces.

At first, I thought this was similar to how Lego sets come with numbered bags for each set, however, I soon learned that was not the case. This dawned on me after emptying out bag 1 of 2 and realizing I couldn’t find the pieces I needed after only getting a couple of steps into the build.

Instead of numbering the bags in order of each step like Lego sets do, Bricker Builds sends pieces sorted in bags by shape or type. This took a little time to adjust to, but once I did, I was flying through the build with no problems.

No matter what option you purchase, the instructions you receive will come in PDF format. As someone who has built sets using both paper and PDF instructions, I much prefer using the PDF version. Zooming into the page on a tablet or computer is far more practical than shoving your face into an instruction book. Plus, you save a tree in the process. 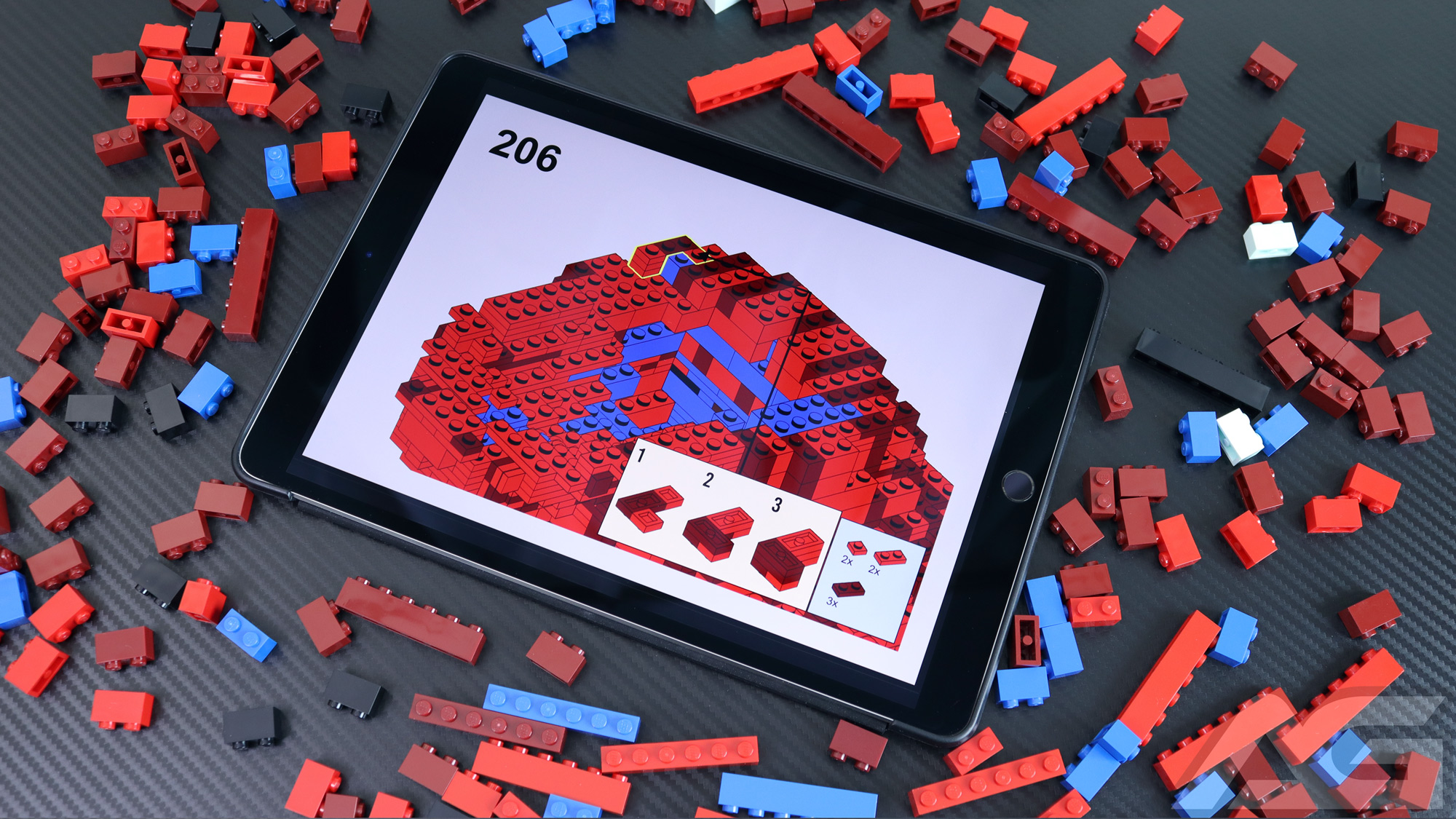 Now for the part you’ve been waiting for, how difficult is building such an impressive-looking Lego sculpture? At first, building the Spider-Man No Way Home Life-Sized Bust can seem a little daunting. It is comprised of 3,000 bricks after all—and when completed—stands nearly 17-inches tall, 8.5-inches wide, 8.9-inches deep, and weighs 5.5-pounds.

However, never fear web-slinging fans, thanks to the well-laid-out instructions, just about anyone should be able to tackle this project. It mostly consists of precisely stacking plates and bricks, except for some advanced techniques using SNOT (Studs Not on Top) bricks on the face.

Regardless, I never once found myself getting lost or stuck during the build. Bricker Builds has done an amazing job on the instructions streamlining the build process. Plus, if you ever have any questions, Bricker Builds encourages you to reach out to their stellar support team for help.

My only complaint would be that I was four bricks short by the end of the build. One piece was missing entirely, while three were red when I needed dark red to complete the webbing on the head. Not to worry, as I mentioned, Bricker Builds has fantastic support, and after sending an email and waiting a day, the missing parts were on their way. 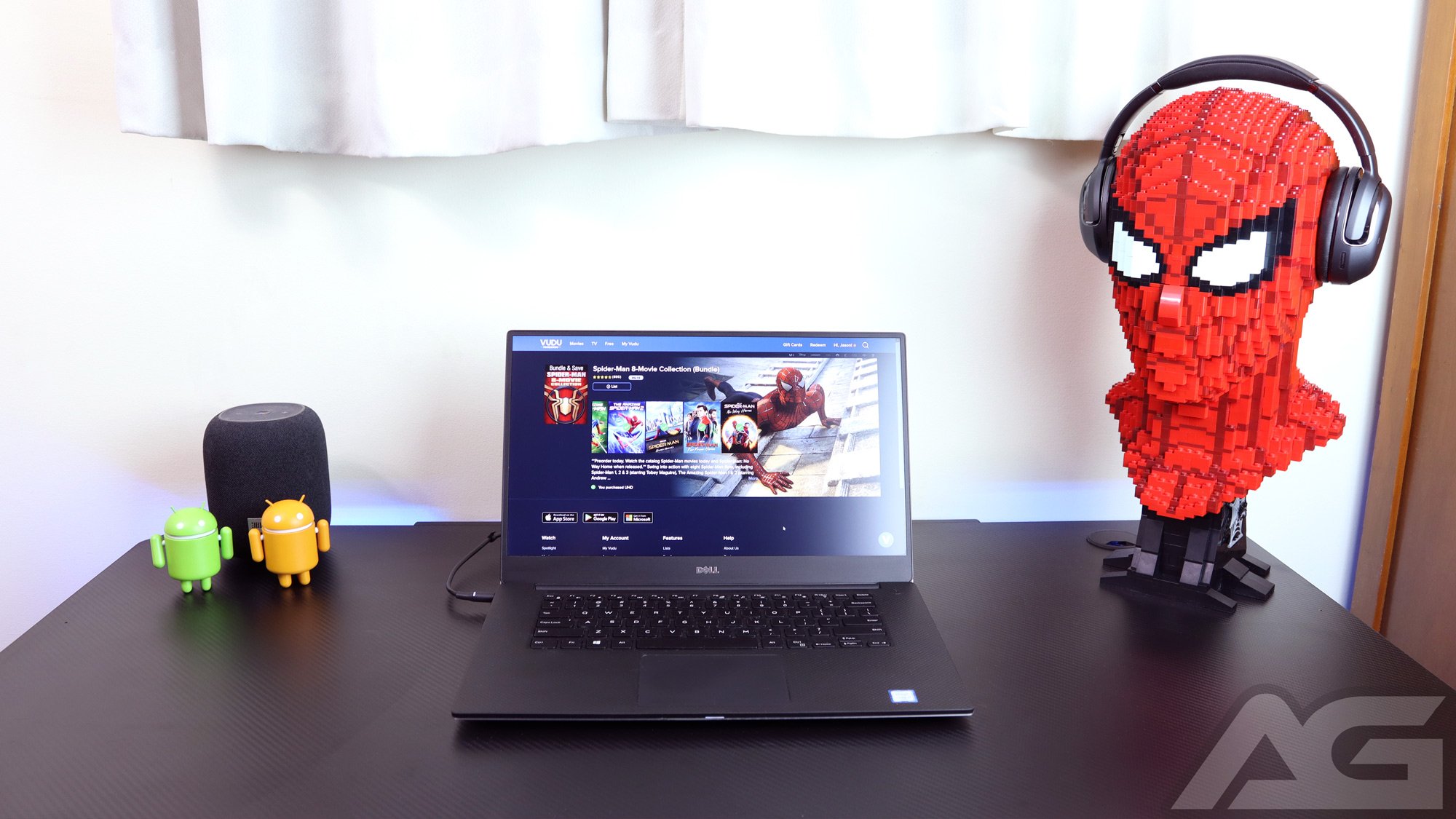 In the world of Lego MOC (My Own Creation) sets, Bricker Builds stands out with impeccable life-sized sculptures designed by Lego masters and top-notch customer support. While their sets may not come cheap, you’re getting genuine Lego bricks, and a one-of-a-kind Lego showpiece that is not only fun to build, but will also look fantastic in your home. The Spider-Man No Way Home life-sized bust even makes a fantastic headphone stand.

If you do place an order, make sure to sign up for the Bricker Builds email newsletter in order to receive $5 off your purchase.

The gaming mouse both wired and wireless has changed a lot...
Read more

The gaming mouse both wired and wireless has changed a lot in recent years in terms of ergonomics and features. There are lots of...
Read more

Roughly ten months after the debut of the POCO X4 Pro, the successor hits the streets in the form of the (you...
Read more