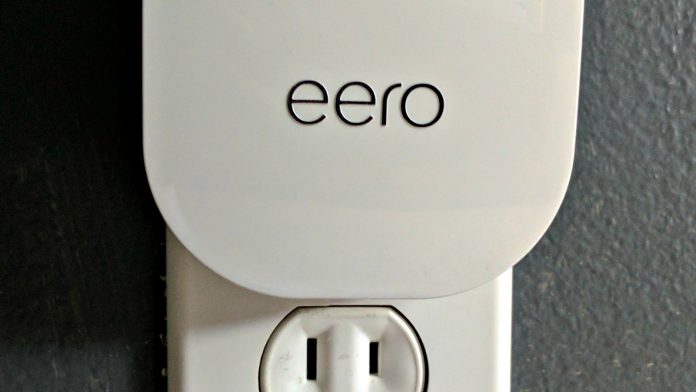 If there’s one thing that aggravates me more than not having a Wi-Fi signal, it’s having a poor one. Yes, I’d rather not have a connection at all than to deal with wonky, unreliable, data on a phone, tablet, TV, or other device. Sadly, this scenario has been all too common in my household.

As someone who has reviewed countless Wi-Fi devices over the years, I’ve come to really appreciate a good signal. On the other hand, I’ve also learned to despise how terrible things can be when connections drop or slow. My teenage son loves to stream videos, play video games online, and watch TV on demand. My wife loves to binge watch shows and often has her phone out, too. Between the three of us, we were really taxing our home internet plan.

After jumping from a plan with 18MBps down to another provider of upwards of 70Mbps down, we thought we’d gotten beyond our main problems. It took us all of around two months to understand that while we had much faster internet, we didn’t have a better one in parts of our home. 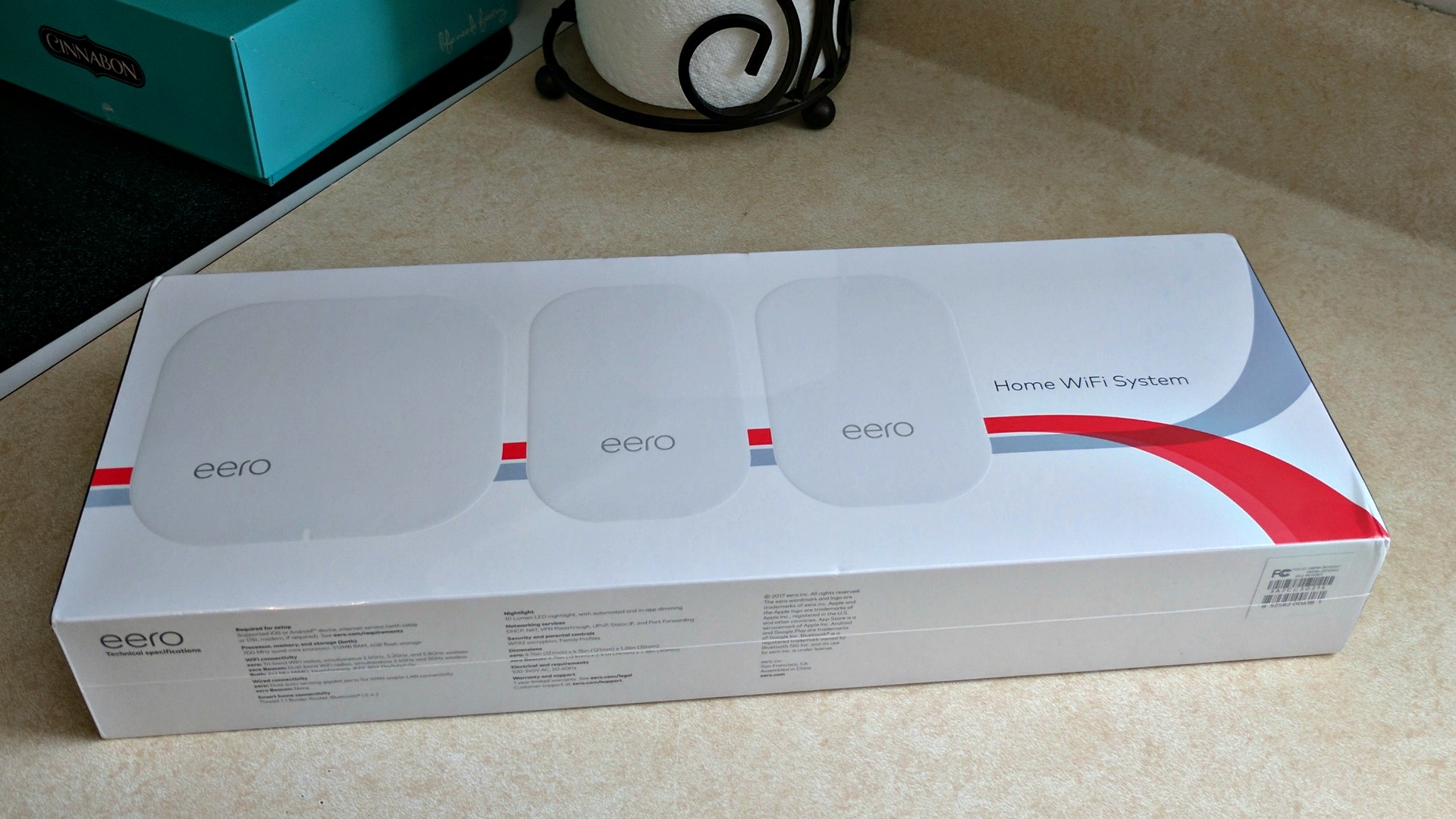 I had already been in the market for something that had a mesh network. Google WiFi is high on my list, but I have my eyes on others, including eero. Approached with the opportunity to review its setup, I was eager to test out the eero and its “TrueMesh” network.

We’d previously set up our wireless router in the center of the house, on the main floor. Ideally, the network would span out and reach the upper and lower floors, hitting the four sides of the home. That would normally work on most occasions but we found it would slow and drop at night when more of us were taxing the system.

I was sent the 2nd-generation eero Home WiFi System ($399), a bundle that includes an eero and two eero Beacons. Designed for houses with 2-4 bedrooms, it is the kit that eero suggests for “most homes”. Note that there are other packages to choose from, each with its own designated use case or preferred setup.

Taking things out of the box, the bundle looked to be really simple to install. There was very little literature to be found. In fact, you’re directed to an app to walk you through the setup.

It took me all of about ten minutes to get going. It’s literally a case of plugging one device into a modem and the other two into wall outlets. I spent about as much time walking up and down stairs as the app and network did working to get started. 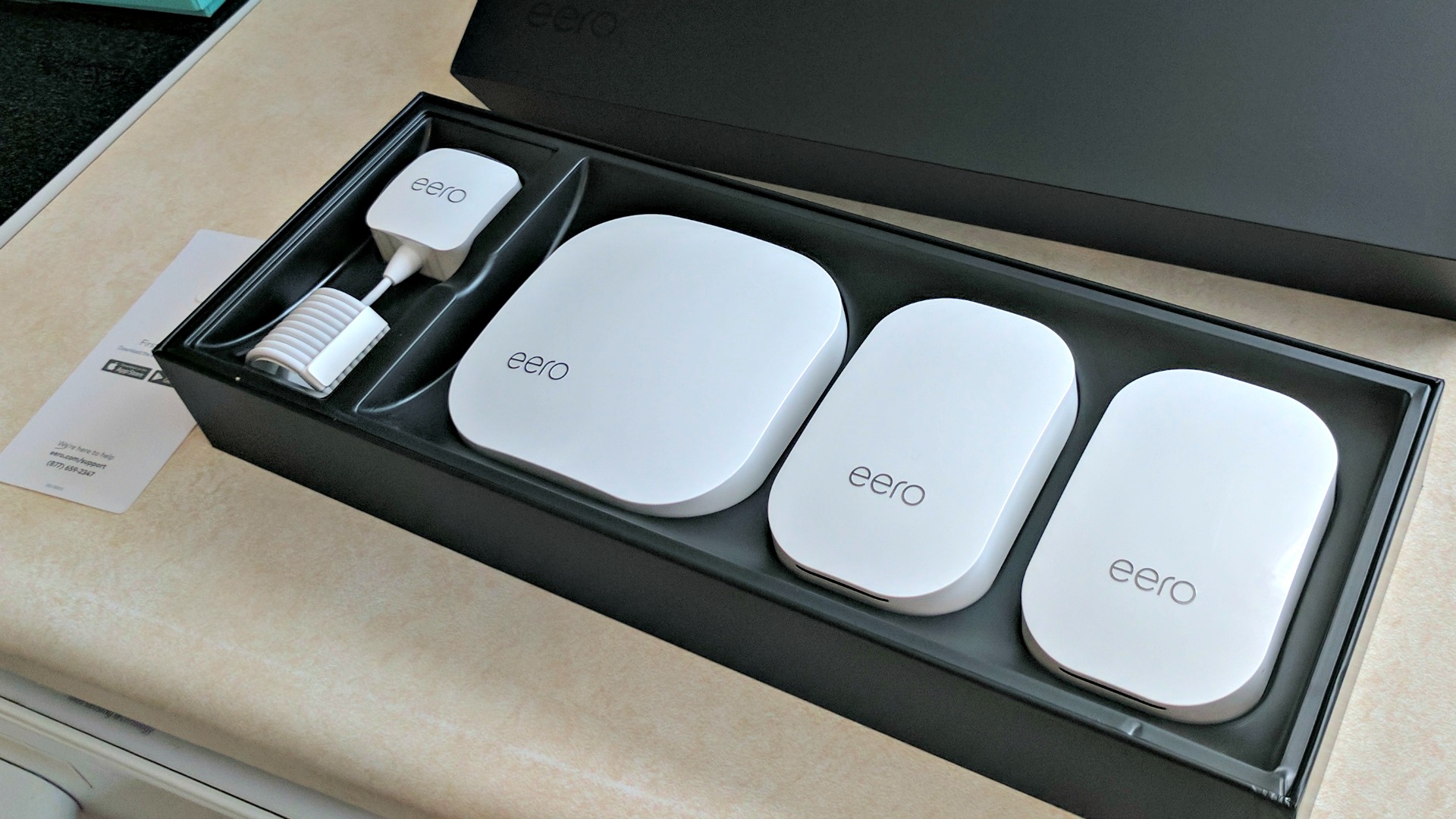 I couldn’t be happier with how simple the process went. Each time I set up a Beacon the app would check to see if its placement was good. There are a few tips provided to help ensure it goes in the right room or area of the house. Twice I received a message about placing it “like a pro”.

The app is where you spend all of your time managing things. There’s no need to log into a website or pull up anything special on your computer. Really it’s just a case of opening the app and following the prompts.

You start out by naming your network and creating the password but you’ll quickly be creating user profiles and managing connected devices. As I was setting things up I created one user for each of us in the house. I assigned my son’s Xbox One and Chromebook to his profile and helped him connect them to the new network.

As someone who contends with a teen who doesn’t always go to bed at reasonable hours, I appreciate the control I have with the eero app. Now that I have his devices under his profile I can pause his data connection. Moreover, I can also schedule days and times for pausing. So, with school starting next week, I have his account paused at 10 PM, keeping him from sneaking in a few more episodes of TV when dad goes to bed. 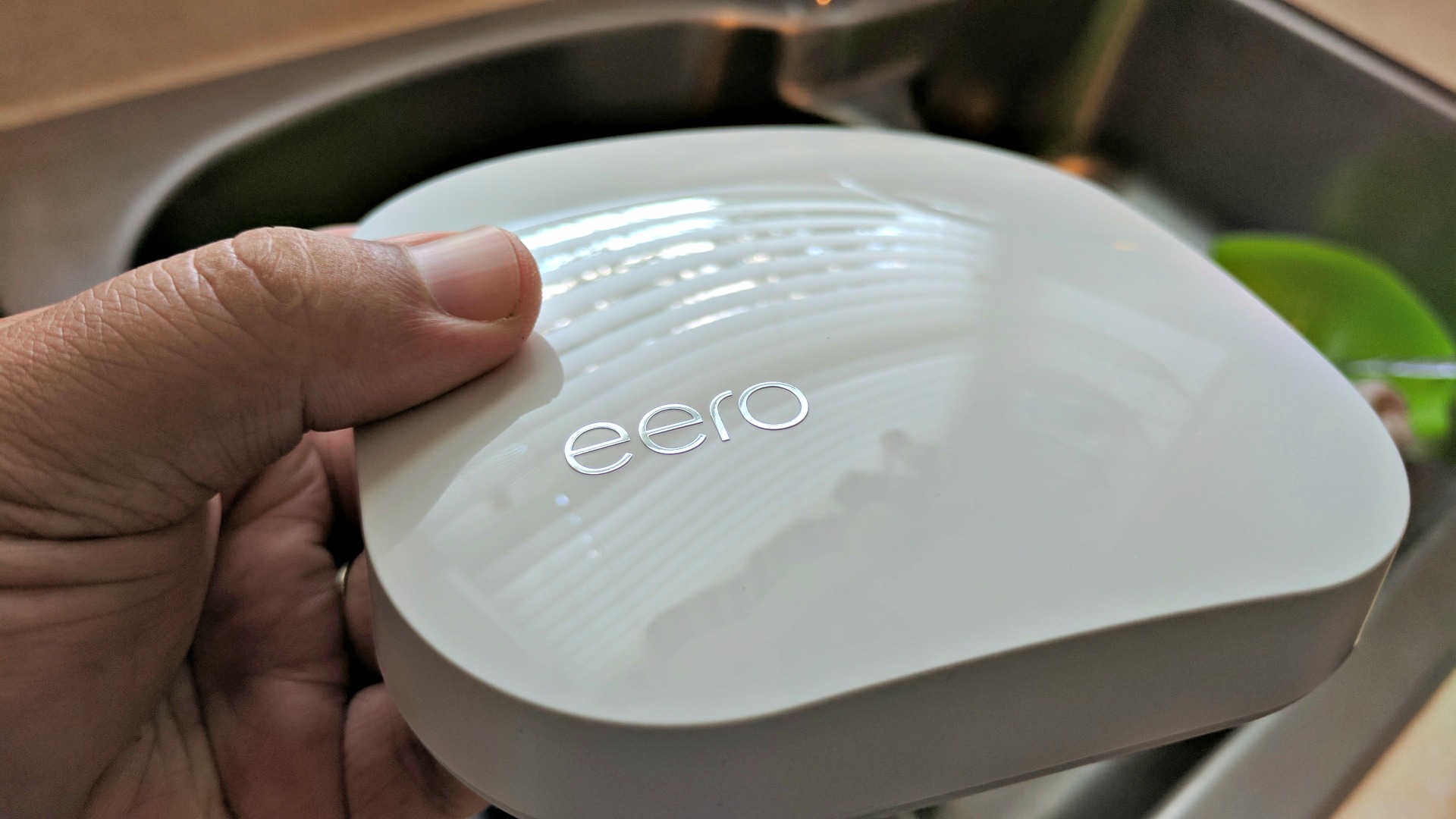 The app is handy for looking at which recent devices are on the network and what sort of connection speeds they’re getting. You can also run speed tests and see which particular beacon or eero a phone is paired with.

If you have guests coming over and don’t want them to have access to your full WiFi network, you can create a temp account and password for them. What’s more, you can set it to expire on them so they’re not auto-connecting the next time they visit.

Since setting up our eero network we’ve had zero connectivity issues. We’re finding that, depending on where we are in the house, we are each pairing with different beacons. Not only are we staying connected in places we’d routinely have trouble, but we’ve not had any buffering or pausing.

I might like to have an extra Ethernet port or two on the back of the main device, but it’s not a dealbreaker. Reasons for this could include network attached storage (NAS) units, a Sonos bridge, or a network-ready printer. I’m okay in my current situation, but there’s something to be said about peace of mind for later on. 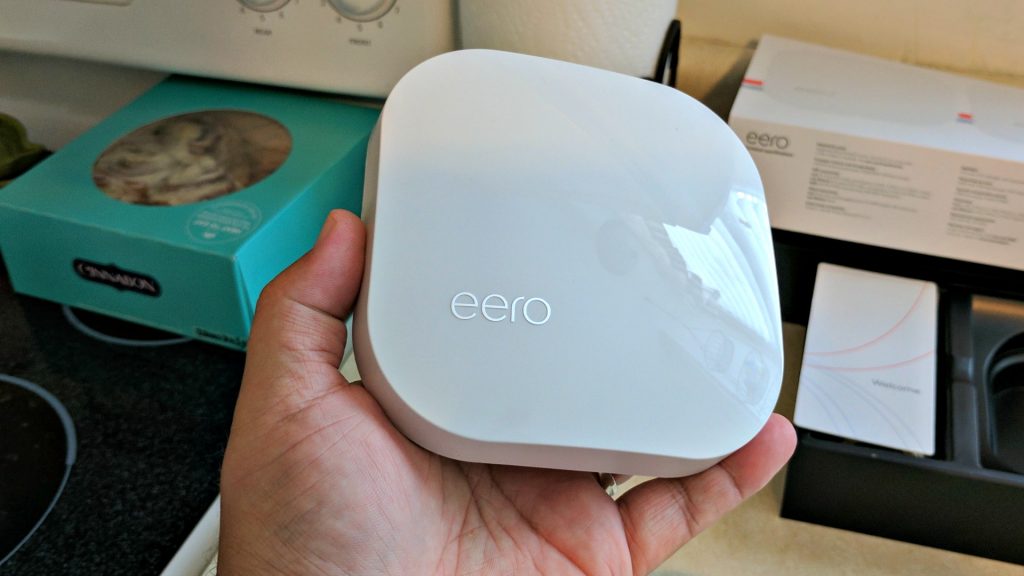 Although I don’t use them, it’s possible to set the Beacons up so that they put off a night light. So, should you place one in a hallway or central room, you can have it pull double duty after dark.

We had a software (firmware) update ready to install on the day we took it out of the box. About ten minutes later it was installed and we were ready to continue going about our business. According to eero, there are updates pushed out roughly once per month, sometimes with bug fixes, and others with features like enhanced speeds or a custom Amazon Alexa skill.

Customers who are looking for an even better level of security, protection, or peace of mind may want to consider adding on the eero Plus plan. Priced at $9.99 per month, or $99 for a full year, it includes tools for anti-malware, anti-ransomware, content filtering, and much more. If you’re a parent or appreciate priority support, I recommend giving it a try. Included with the purchase of the Home WiFi System is a 30-day trial. 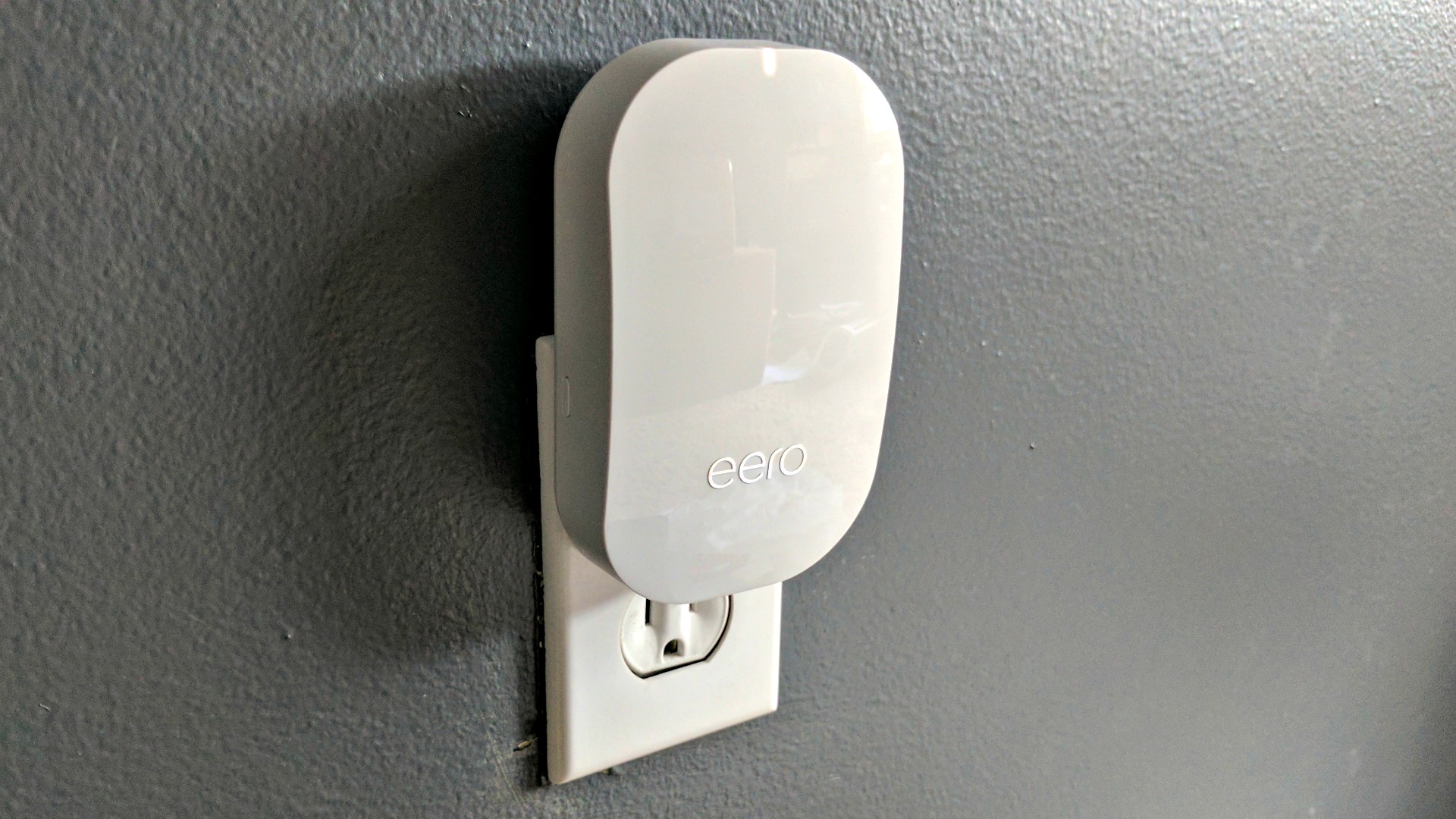 You Should Also Know

After launching in the United States back in June, the 2nd-generation eero and eero Beacons are now available in Canada. Customers north of the border can purchase the products at eero.com, Amazon.com, BestBuy.com, and in select Best Buy stores. This marks the first time eero systems will be available internationally.

I don’t know if I could ever go back to a traditional wireless network, let alone one that I can’t control so easily from a mobile app. I’ve truly come to appreciate the way in which the multiple beacons crisscross each other, spreading the network into places otherwise left alone. Although switching carriers played a big deal into my general internet experience, it wasn’t until I set up the eero network that I could stop thinking about it.

Prior to my time with eero I would routinely hear from my wife that the Fire Stick disconnected or that she would watch her phone pickup and drop from the router. In the two-plus weeks we’ve had this set up she has not had one problem. We’ve actually all three become conditioned to not thinking about internet and just enjoying it.

At $400 this particular eero Home WiFi System doesn’t come cheaply. But, in looking around, I’ve found that you’ll drop a few hundred on just about any brand’s take on mesh networks. For what it’s worth, Amazon is currently listing the same kit for about $360.

I can’t speak for others, but I do know that I love having this sort of configuration and control. If you’re at all interested in stepping up your network game, I have no reservations in recommending eero.