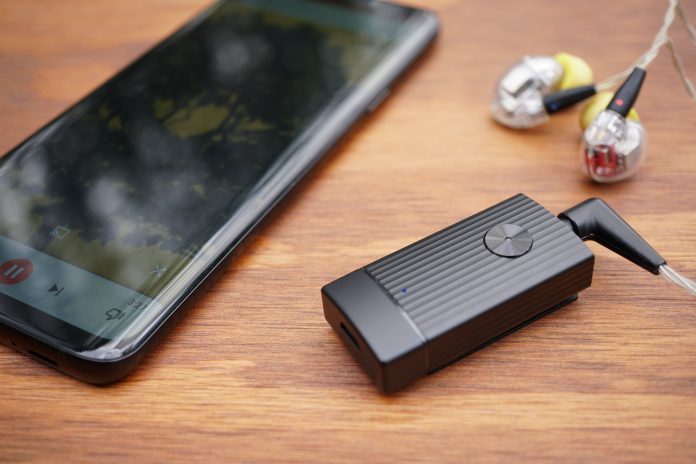 It’s been a year and a half since we’ve first seen the idea of a headphone jack-free smartphone implemented, with the iPhone 7. For fans of wired audio, it’s been a war we’ve been losing since that time. Several major Android players, like HTC, Motorola, and Sony have unapologetically followed in Apple’s footsteps. Fortunately, Samsung and LG are sticking to their guns, at least for the time being.

But chances are that, if you don’t want to carry around a dongle, you’ll soon be forced into wireless headphones. So should you start the emotional process of parting with your beloved headphones? Well, hold on. Fiio has come up with a way bridge both worlds. 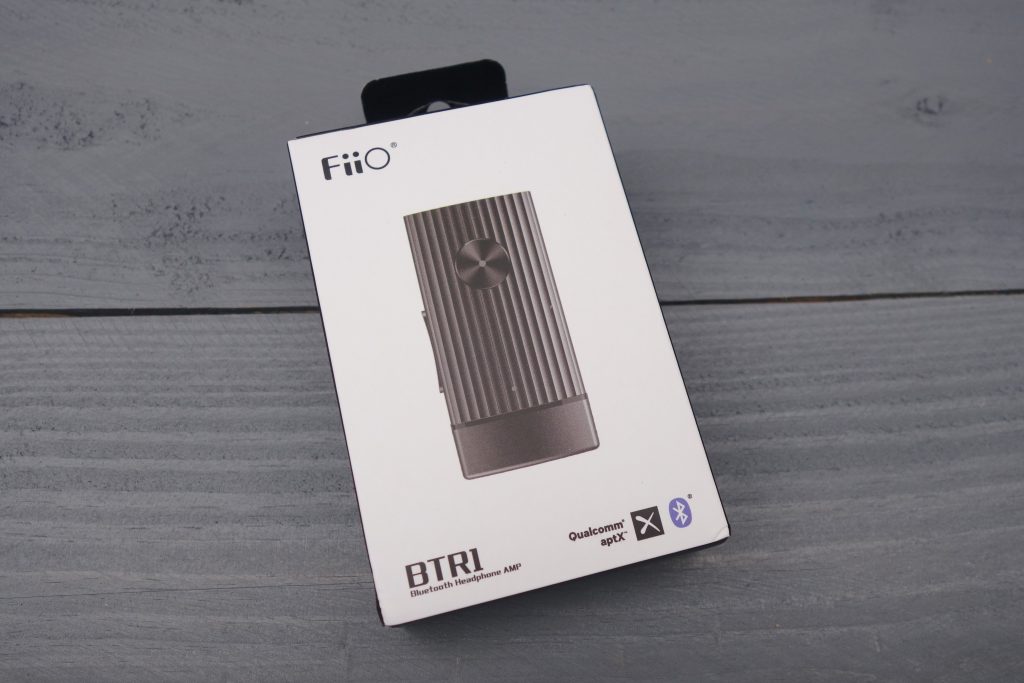 External DAC/amps aren’t anything new, but the BTR1 is different. It’s tiny, barely weighs anything, and is wireless (and affordable!). That is, you connect to your wired headphones to the headphone jack on it and stream audio from your smartphone like you would do to a wireless headphone. The benefit isn’t just that you can keep your wired headphones and buy any smartphone you want, but superior audio, which is a field that Fiio is well-recognized. Let’s see if the BTR1 is a successfully executed endeavor.

For this kind of idea to work, the wireless DAC has to be small. It also needs to be exceptionally lightweight, so that it’s effortless to manage. Traditional external DACs can be as big as smartphones themselves and can weigh you down. For the BTR1 to work, it needs to be barely there. 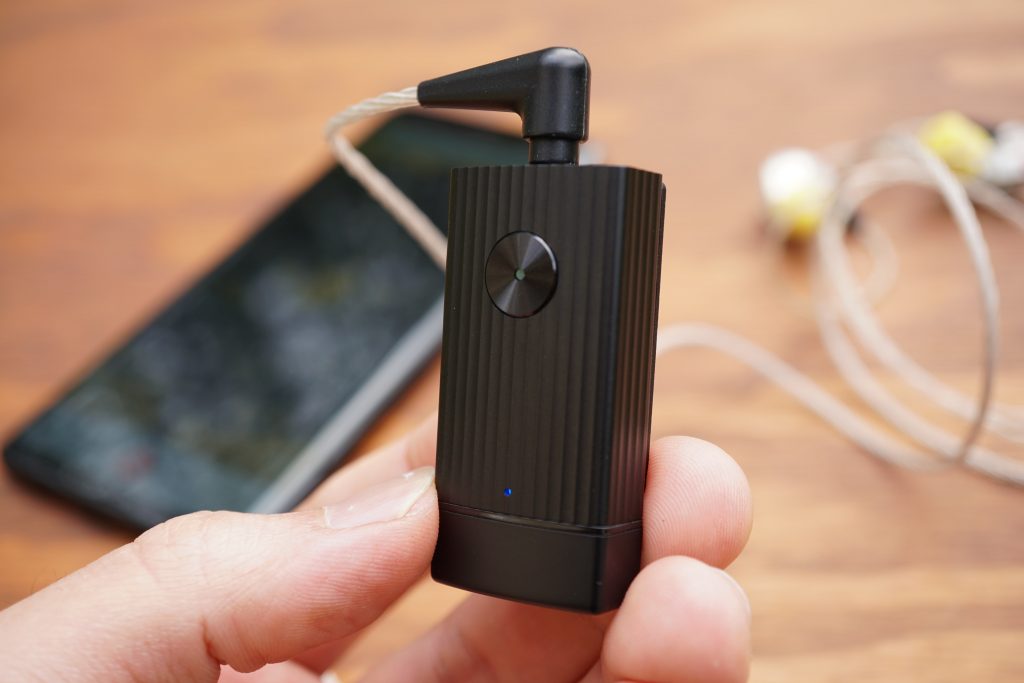 Fortunately, this describes it almost completely. No, the BTR1 isn’t as slim as a mere dongle, but it’s not far off. It’s about the footprint of a traditional flash drive, and weighs only 20 grams.

Still, it may be awkward for the unit just hang from the end of your headphones. That is why Fiio incorporated a robust clip on the back. You can attach it to your clothing, or like I like to do, just throw it in my pocket. 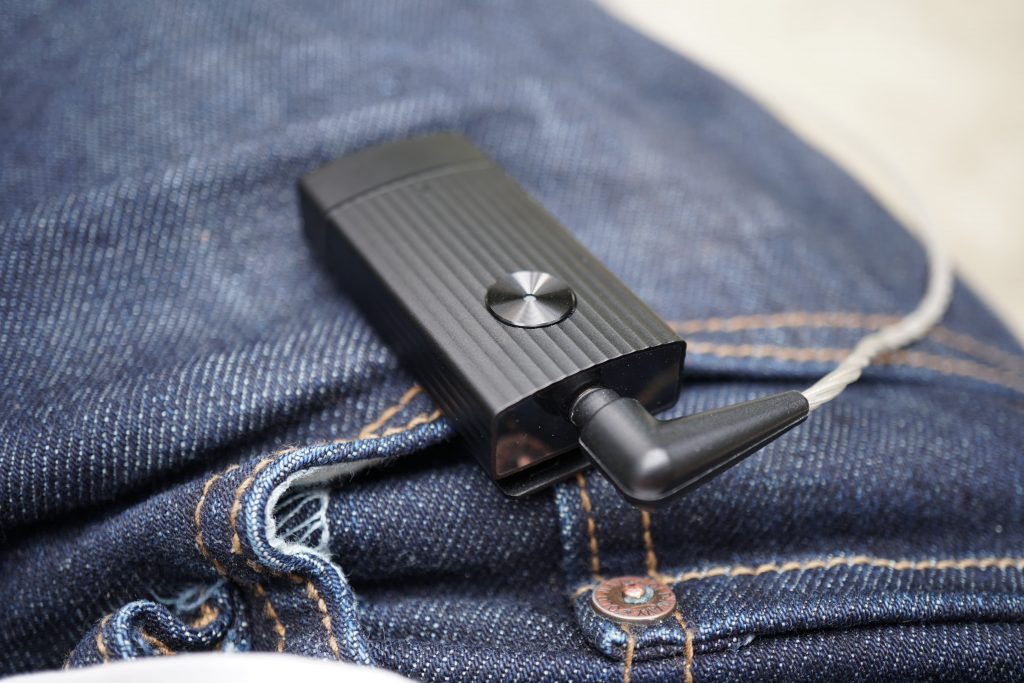 For a device that aims high but only costs $50, it’s common that we get a mediocre build. This doesn’t happen to be the case here. The BTR1 is mostly cased in a metal shell, with an attractive ridged texture and solid buttons. There’s of course also plastic in the construction, but overall, the unit conveys sturdy and premium feelings. It’s not often manufacturers go above and beyond.

As expected, there are few exterior features on the BTR1. This thing is ultimately a pass-through for wireless music, so it shouldn’t be complicated.

Front and center is the main button, which primarily serves as the power button but also plays/pauses the music. On the right side of the unit is simply a volume rocker. And towards the bottom on the front is a small LED to indicate status.

Getting started is also a simple process. The BTR1 will be in pairing mode at its first boot-up, and lock-on to the mobile device thereafter. One thing we appreciated is that the volume control on the unit adjusts the volume on the phone end, so you don’t have to annoyingly deal with two separate volume sets like on with many other Bluetooth pairings. However, a drawback of that is coarser volume attenuation – a concern for sensitive headphones.

There are more functions baked into these few buttons via multiple or long presses. This means there’s a bit of a learning curve associated with navigating the BTR1 proficiently, but many are intuitive, like long-pressing the volume buttons to switch tracks or pressing the main button to answer/end a phone call (yes, the unit has a microphone to administer phone calls). But we were stumped when we wanted to pair it with another device, and we had to look at the manual for that (holding the main button for five seconds only from an off state). Speaking of which, the BTR1 can stream to two devices at the same time despite not having Bluetooth v5.0.

From the manual, we also found that Fiio generously incorporated a custom sound effect. You access it by double-pressing the main button, and a green LED lights up at the center of the button. It, unfortunately, isn’t a multi-option or customizable EQ feature; it only has one preset that you select or not. But it does sound pretty good. Bass gets a slight boost and the sound gets fuller and more 3D-like. 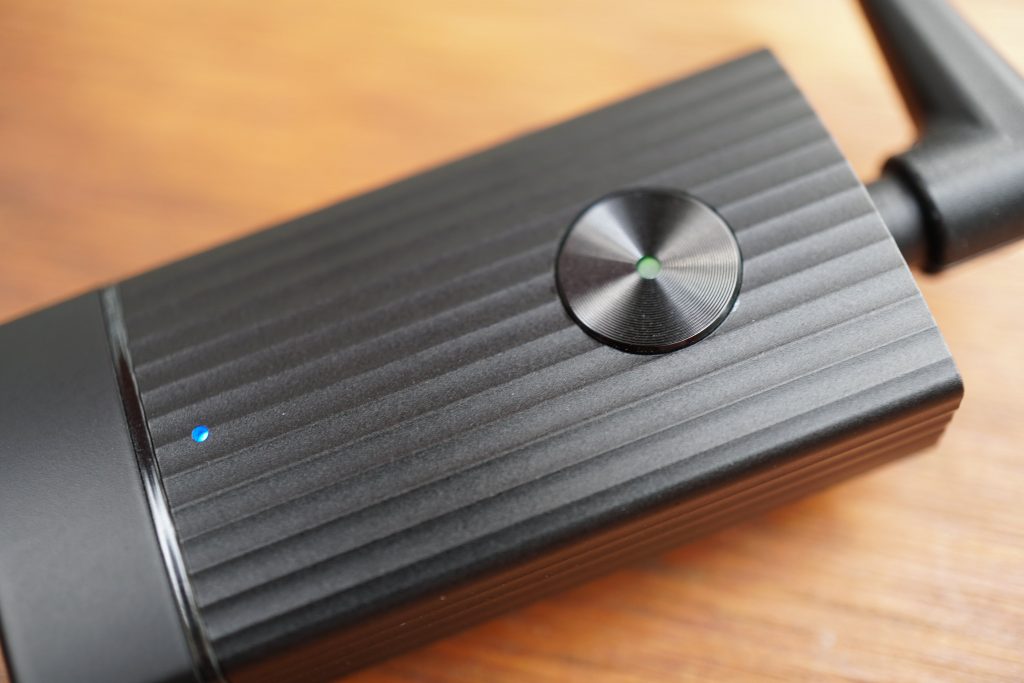 The 205 mAh capacity of the unit is rated at about 8 hours of playback, and we got close to that. Mind you, battery life is volume dependent, and we used low-impedance earphones. Speaking of volume, don’t expect the amp in this little guy to be able to push demanding headphones. Fiio pits the impedance recommendation between 16 and 100 ohms. This will be fine for most people, and almost all portable headphones are within this range.

Considering the small size of the BTR1, it’s reasonable to not expect much in terms of audio quality. What capable DACs out there can be this small? Well, turns that AKM made such a chip, called the AK4376. It can impressively do 384 kHz and 32-bit decoding and sports a notable signal-to-noise ratio of 116 dB. We put that number to the test, plugging in our sensitive 9 ohm Shure SE846 earphones, and we were surprised to hear an almost silent noise floor. Very impressive for a tiny, wireless streamer. 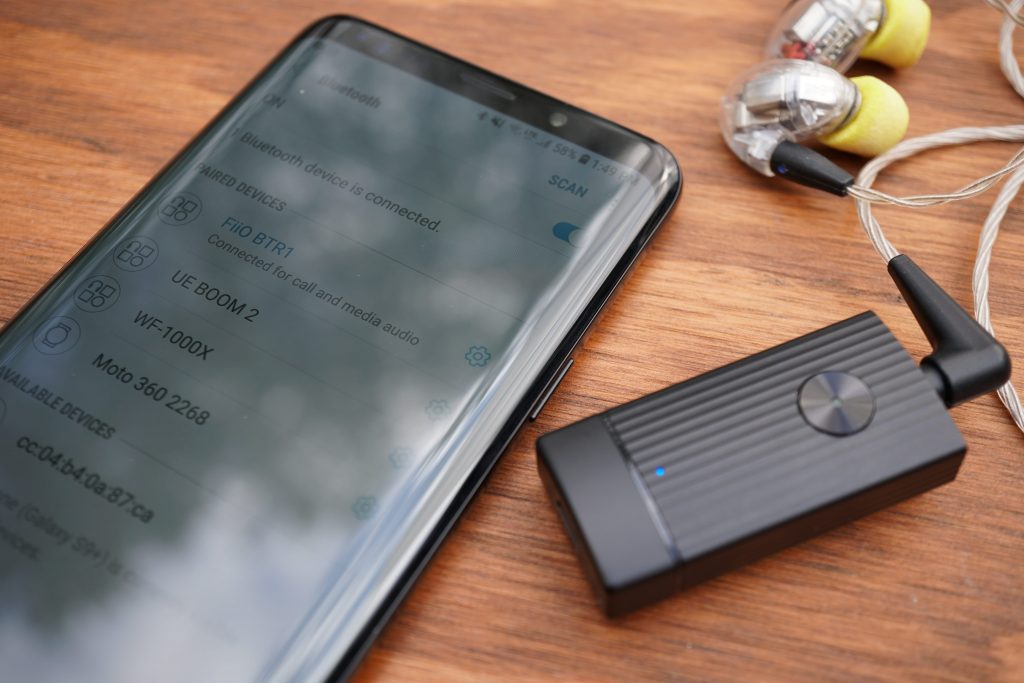 Fiio also didn’t forget about wireless transfer bit-rate. There’s no point in processing power if the audio data is poor. The BTR1 uses the aptX Bluetooth audio codec, which caps at 384 kbps streaming. It isn’t the least compressed aptX HD codec, but the standard aptX rate is where most streaming services cap their “High” audio quality setting, so it should be fine for most people.

But does all this actually equate to great audio? For the most part, yes. Of course, this tiny DAC isn’t going to be able to compete with larger offerings, but it does punch well above its weight. What we appreciated the most is that the sound signature sounds like it’s tuned by someone who knows what they’re doing. We praised Fiio’s fantastically balanced sound in its flagship X7 Mark II audio player, and the company’s DNA is even detectable in this little guy. All areas of the sound have the presence they should and are cleanly articulated. It’s also a full and engaging sound, as opposed to a sterile, “referenced” one.

Again, balance is the prominent aspect. So you won’t find a strong, boomy bass, V-shaped sound signature, or bright treble. There’s enough impact in each range to capture your attention but not past that. Fortunately, if you do want more oomph, then there’s that sound effect feature on the unit that we talked about.

No, you won’t get the most detailed or clearest reproduction you’re able to with a portable DAC, but BTR1 surprisingly gets a good of the way there (while delivering a refined sound). The same goes for soundstage width and dynamics – the BTR1 isn’t the most skillful here but well-done for the unit’s size. 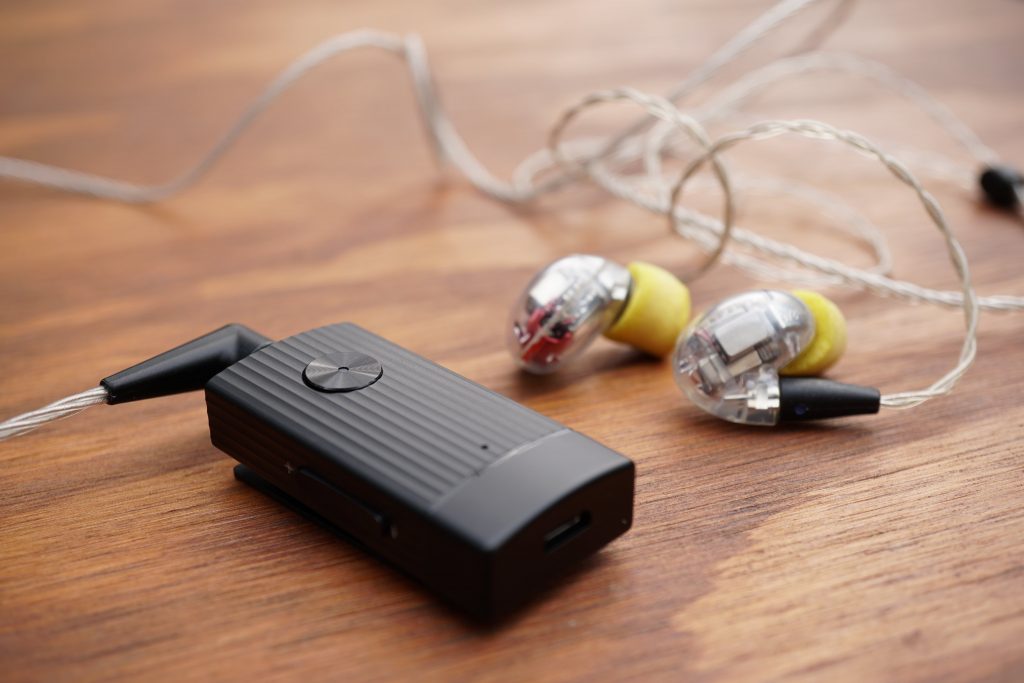 If you are reluctant to give up your wired headphones and are eyeing a smartphone without a headphone jack, then the BTR1 is quite frankly a no-brainer. Even if you have a headphone jack, there’s still benefits here. You’ll get better audio quality than a standard phone DAC will provide, and you’ll have the convenience of wireless by being able to detach from your phone. The BTR1 is only $50, so it’s even worth it if you were only to use it sometimes (like when you’re traveling and doing a lot of walking). Great job Fiio.