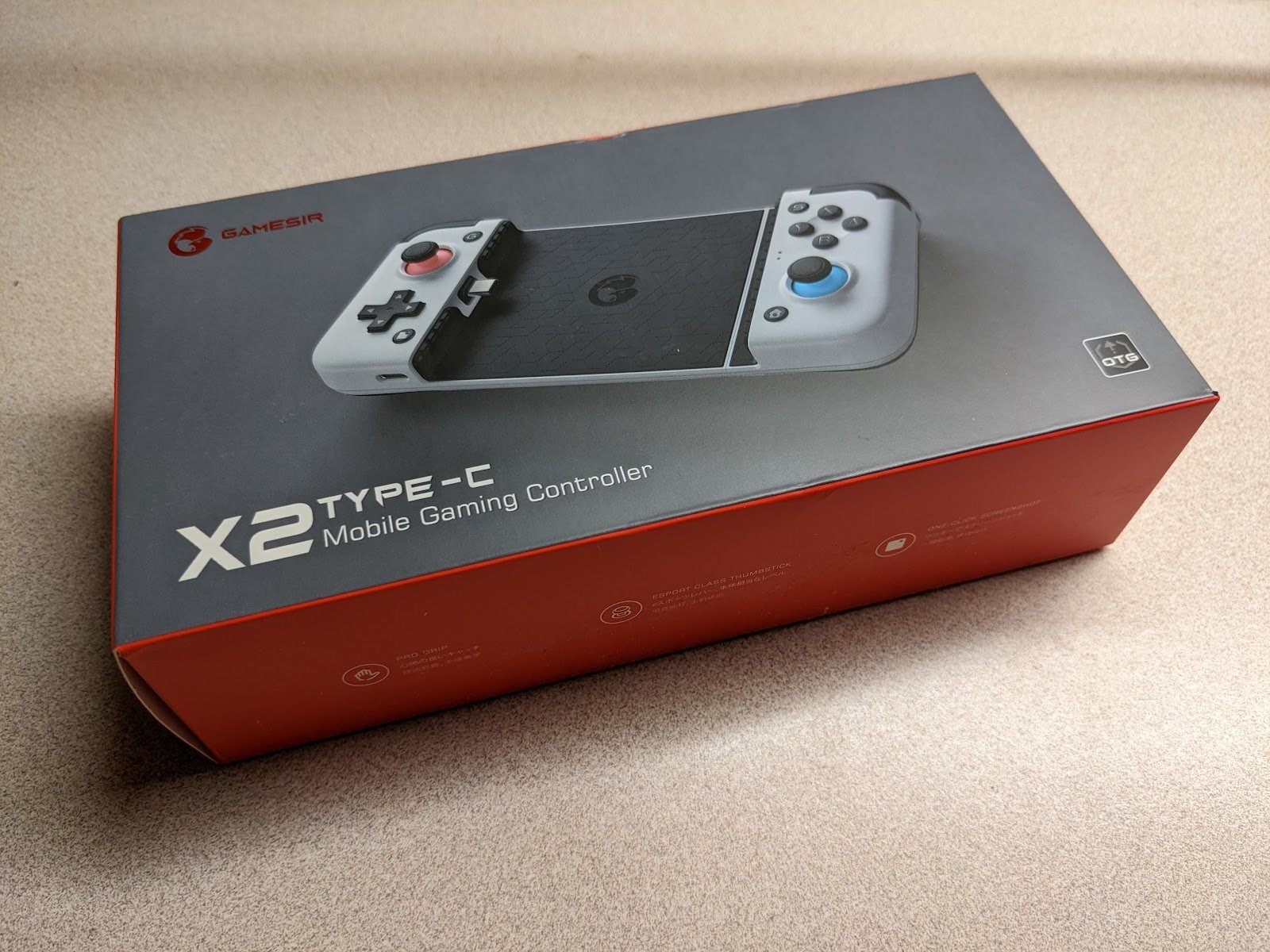 The X2 is a “mobile gaming controller” from GameSir designed to give you an edge as a mobile gamer. If you’ve ever given games like Call of Duty, Fortnite, Player Unknown’s Battlegrounds, and Minecraft a chance on your mobile device, you’ll understand the need for a controller like the X2. Long periods of gaming on a touchscreen are rough on your joints and fingertips.

Having a controller like the X2 gives you a more comfortable position for your hands and allows you to game without covering up the screen with your fingers. All you need is your mobile phone (under 173mm long), the X2 controller, and the GameSir app before you can start gaming like the pros.

Removing the X2 from the packaging, you will find that the controller comes with a protective case and a box with the setup guide as well as a couple of joystick accessories, which I believe are designed to improve the grip and surface area of the joysticks.

Surprisingly, the case and controller are quite small when completely collapsed, so it won’t be too big of a problem storing the controller in a book bag or purse. The buttons are very easy to press, yet pretty tactile and clicky. The bumper/trigger buttons are also very lightweight and make a satisfying clicking noise when pressed.

If you’re familiar with the button layout of the Nintendo Switch, the GameSir X2 will feel right at home in your hands.

How to Connect your Device

To actually get the phone into the controller, it’s fairly simple. If you choose the wired connection option over the bluetooth, GameSir has a very nice feature that affords the adapter plenty of wiggle room; up to 51 degrees, according to their website. Then you can simply pull the right side away from the left, align the device, and release the spring-compressed controller to form a snug fit.

Once the phone is in the proper position in the controller, it feels very solid and I never once questioned whether the phone would stay put. I even shook the controller around with complete confidence to be sure that it would keep my phone safe while gaming. If you’ve known yourself to get a little heated when playing competitively, fear not for the safety of your iPhone or Android.

The X2 comes in three different input options, USB-C, lightning, and wireless Bluetooth, so no matter the brand there is an X2 for you. Once the connection between devices is successful, a blue indicator light will appear on the right side of the controller. Next, you will have to install the GameSir app.

While I’m not entirely sure that you absolutely need the GameSir app to use the device, I found it very convenient to have it. The app gives you some tips and useful information for programming buttons or picking games to play that the setup guide does not.

I have a couple of issues with the app, though. Once the app is started and running in the background, you cannot easily shut it down. A GameSir notification was constantly showing in my notification bar about some “world remap” feature even after I had fully closed the app and disconnected the controller. My only choice to get rid of GameSir’s overlay was to force stop the application in my device’s settings.

I also wish that GameSir would provide more official technical support and Tutorials for the X2 through their app. For people even less tech savvy than myself, I think a couple of YouTube videos about mapping buttons and actually using them in games would be of great importance.

While there are a couple videos on YouTube already, there isn’t anything that I found to be of much use with troubleshooting, so an official GameSir video series about it might alleviate struggles that owners of the X2 might be having.

The app itself actually does a great job of providing lists of games that are available for native support as well as games that will work with some configuration. And thus, the hardest part of using the X2: the button mapping for non-natively supported games.

If you’ve already got some experience with other mobile gaming controllers, you’ll be much better off than me. For the games like Minecraft and Fortnite that have native support for the X2, it works flawlessly! I could not expect any better functionality from it, and it even allows you to seamlessly switch between controller input and touchscreen input, but if you want to try your hand at configuring the controller to work with games like PUBG and Call of Duty, you’re likely going to have to do a but if fiddling. The functionality is definitely there, but it isn’t easy.

The mobile gaming community has a lot of younger and older individuals who aren’t going to be able to play their favorite games like they should because of the confusing interface.

The app itself is simple and very easy to understand, but GameSir’s overlay interface that they use to control and customize the button mapping technology is just plain difficult. They have two different modes called EggNS and GameSir World that you can switch between by pressing buttons on the controller, but they don’t explain the difference between them in the app or in the setup guide.

I messed around with it for over two hours and just couldn’t figure out how to get the ball rolling. I could see where each button was mapped to, using Egg NS mode, but when I tried to move the button placements around to do something as simple as closing out of an ad, it just didn’t work.

To use the button mapping, you have to add the app of your choice into the game folder within the app, and then open it from there. Once you do so it will bring up the overlay and the game, but it doesn’t allow you to touch the screen if you need to close an ad, or ready up for a match.

Unless I am doing something wrong, it seems the interface functionality is just not all there for games that aren’t natively supported, and GameSir doesn’t provide much troubleshooting in the app or setup guide to help, so if you aren’t technology oriented but want to play games like Call of Duty or PUBG, be prepared for a struggle. Fortunately, GameSir provides a list of all of the apps that support the X2, so you can check there for your favorite games before making the decision to buy.

The build quality of the X2 is pretty great. It has micro switch plastic buttons, triggers, and bumpers that are tactile, satisfying, and easy to press. The silicon joystick covers they provide in the box are grippy and you won’t have to worry about them slipping off while in use.

The overall design of the controller is high quality as well, it just looks good. There are soft, rubber grips on the back of the controller to add more friction and make it more comfortable resting in your hands. They have a couple of extra buttons on the corners of the controller that serve different purposes, including one which can instantly and conveniently take a screenshot at any time.

The spring mechanism that makes the controller collapsible is springy and absolutely locks your phone into place. Once it is in the controller, it is not going anywhere.

On GameSir’s website, they claim that the buttons are good for 3 million clicks, which I think is a fantastic baseline for durability. For reference, this is on par with newer Microsoft Xbox controllers, and equates to roughly 10 years of regular use according to Microsoft.

Summary If you’re a big fan of mobile gaming and willing to take on the challenge of configuring GameSir’s “G-Touch” properly, then the X2 is a respectable option. If you are looking to use it for one specific game, be sure to check GameSir’s list of compatible games (both native and non-native supported) before making the decision to buy.

For roughly $70 USD, the durability and comfort that the controller adds to mobile gaming is worthy of an investment, I just hope to see some improvements to the ease of the user interface that comes with the button mapping. If you want to play the native support games, the controller is fantastic, and the software works exactly as I would hope. It accepts rapid button mashing and the wired connection means there is extremely little input lag.