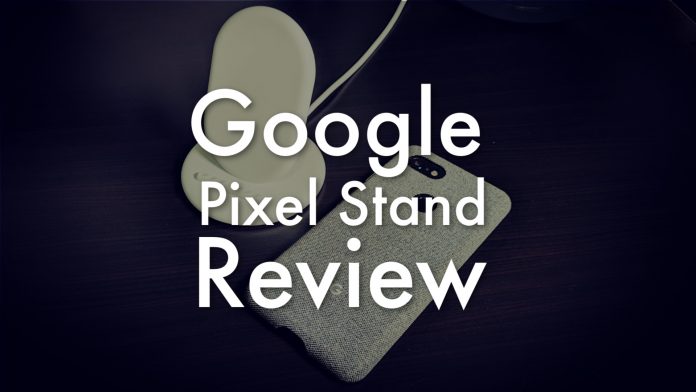 One of the most noteworthy additions to the Pixel line of phones for 2018 is the option for wireless charging. Available in many other flagship phones of the day, it’s been sorely lacking from Google’s seat at the table.

Not only did the Pixel 3 arrive with wireless charging, but it showed up with a new charger, too. Available now, the Pixel Stand delivers a fast, wireless charge to the Pixel 3, Pixel 3XL, and other Qi-capable phones.

The Pixel Stand runs $79.99 and comes in one color – white. It’s a simple design that looks very much in line with other Google products. In other words, it’s soft to touch, easy on the eyes, minimal, and modern. If Material Design were to make the leap to physical products, this would be a shining example. 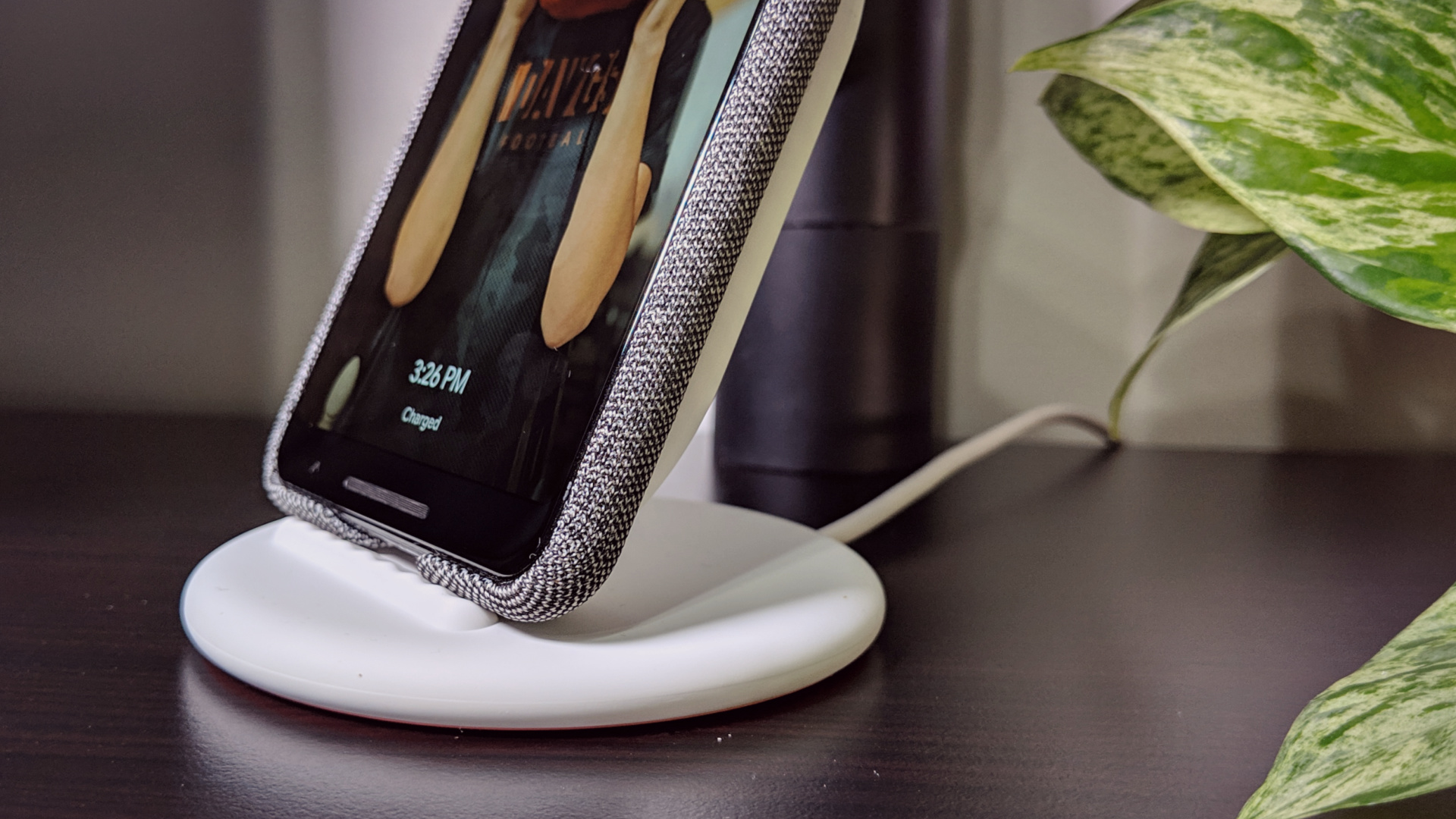 As a single piece of hardware, the Pixel Stand looks a tad unorthodox. A circular disc forms the bottom base while a pill-shaped platter creates the stand. A small, bumpy ledge on the base ensures your phone doesn’t slide around. The whole unit is soft and smooth and comes across more like rubber than plastic.

The Pixel Stand isn’t designed to fold and go; it’s the type of charger that requires a more permanent placement. You cannot disassemble or fold it to pack up for travel so don’t look to this one for your on-the-go needs.

There’s almost no physical setup required to get going with the Pixel Stand. Simply plug in the included USB Type-C cable underneath and flip it upright.

The charging stand employs the Qi standard for charging so it will work with other phones that allow for wireless recharge. Our suggestion, though, is that you might want to consider other chargers as they’re going to be less expensive and possible have different features. 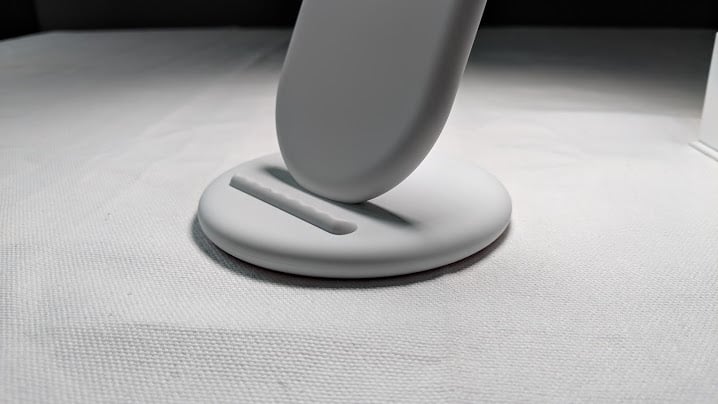 In fact, it’s reported that Google only provides the full 10W worth of power to the Pixel 3 phones. Other models with Qi wireless charging capabilities are getting 5W speed. For that alone we suggest looking elsewhere for a wireless dock for non-Pixel models.

The Pixel Stand is primarily designed for the Pixel 3 and Pixel 3 XL.

What’s so special about those phones that they pair so well with this particular charger? It’s the Google Assistant smarts and other features that unlock when you connect to charge.

Place your Pixel 3 or Pixel 3 XL on the Pixel Stand for the first time and you’ll be prompted to set up a few additional options. Instead of simply charging, the stand can turn your phone display into something that is actionable and powered by Google Assistant. 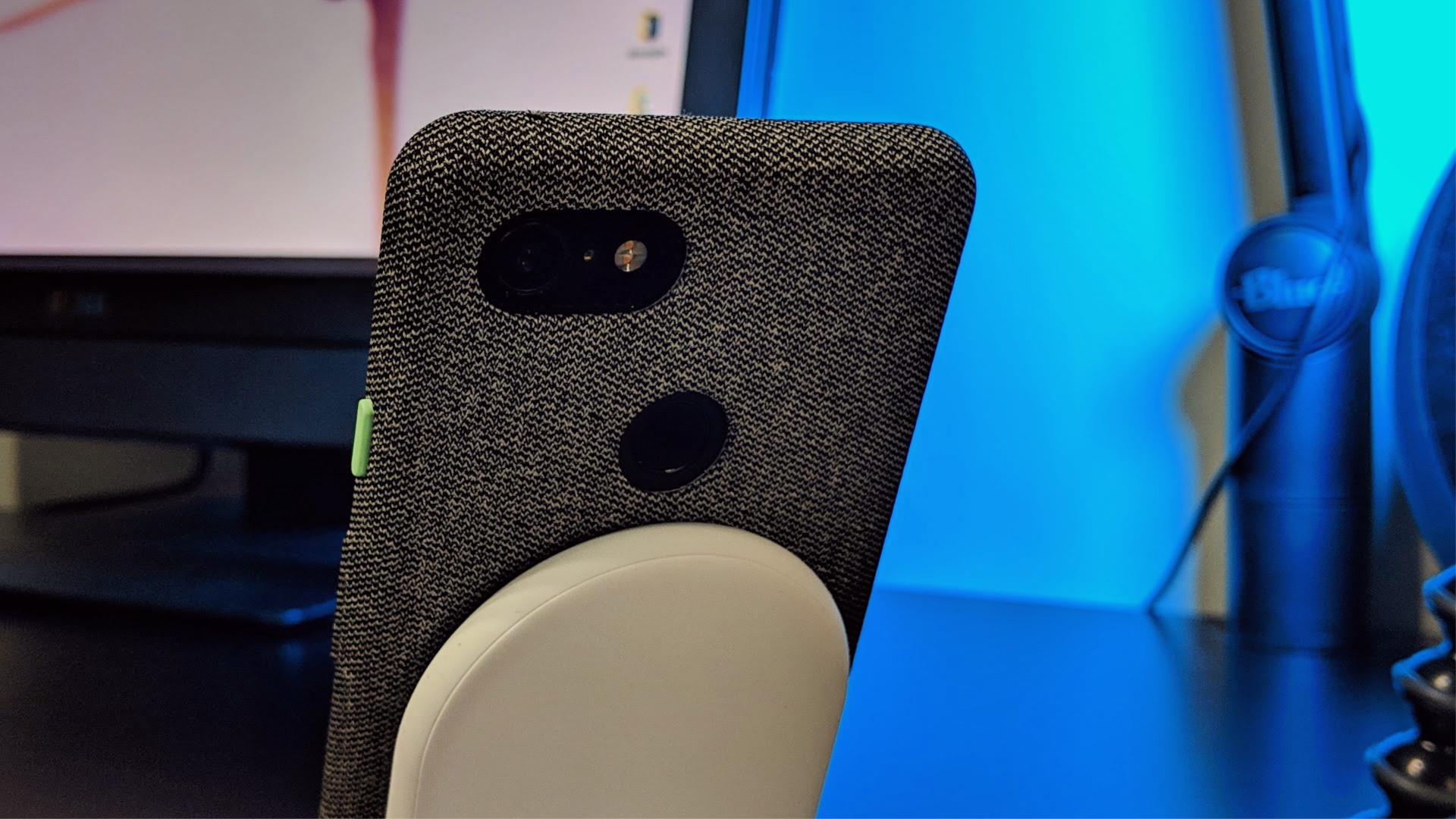 Using the ambient display of the phone, you can glance over for weather, time, date, notifications, and Google Assistant on standby. You’ll also see a small button that says “Good Morning” or another message based on the time of day. Tap it and you’ll get the same stuff you might hear when asking Google Assistant how your day looks.

The visible snapshot of your day (weather, traffic conditions, schedule, reminders) is a welcome addition to the charging experience. Having something to glance at often helps us to recall things later in the day.

You can set things up to show upcoming appointments, or tap the Google Feed to display headlines, trending topics, and other suggested actions. It’s great to have a visual companion to Google Assistant and essentially turns your phone into a small Google Home Hub of sorts.

It’s also possible to customize the phone to show your Google Photos as a screensaver or changing wallpaper. Choose from a particular album or two or let it automatically display recent highlights. It’s always random and sometimes stacks two photos on top of each other or next to one another. 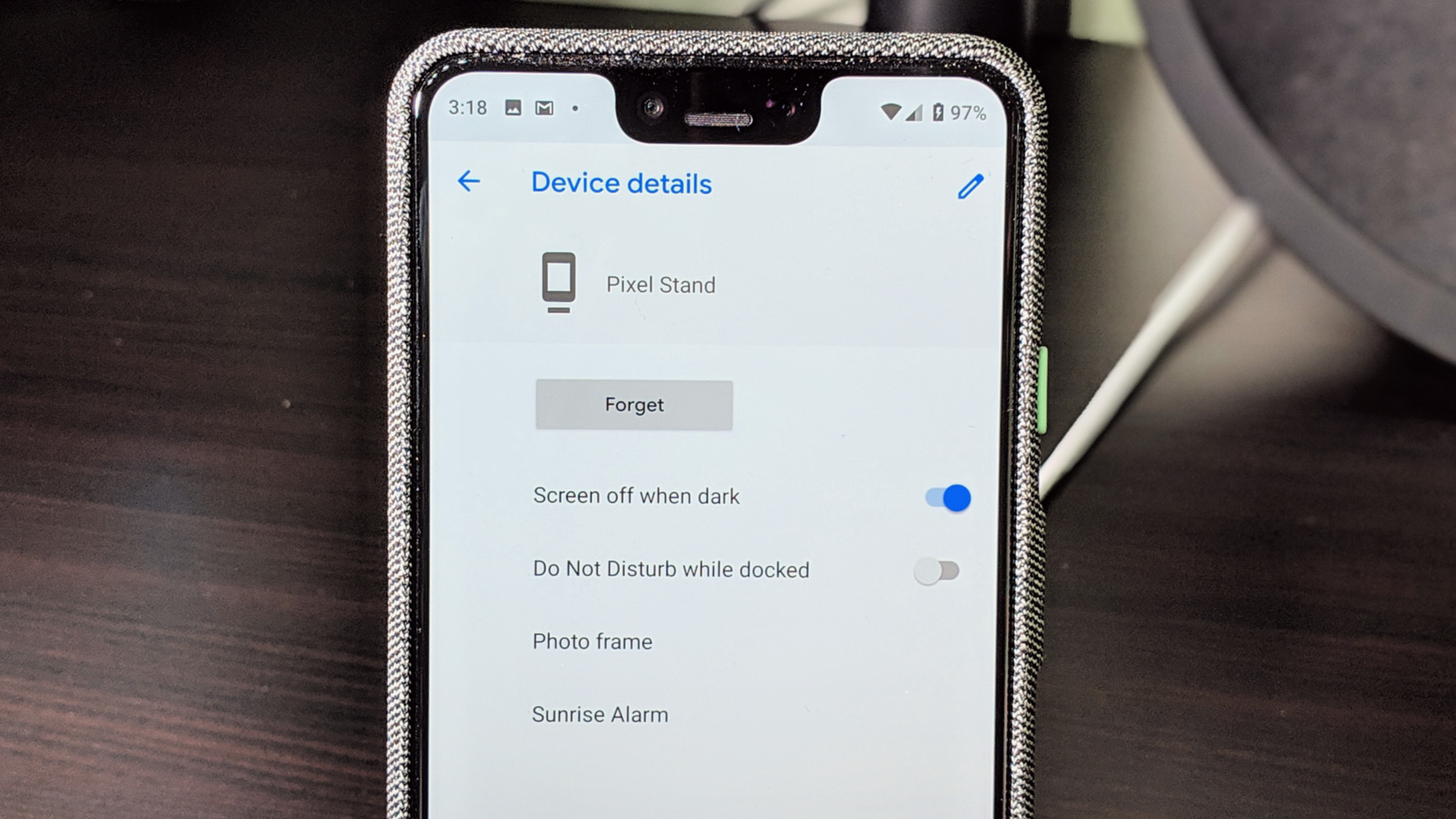 If there’s a minor gripe about the photos, it’s that they are displayed at full brightness. So, depending on where you have the Pixel Stand, you might find yourself distracted every time a new image (or two) pops up.

Another situation where we found ourselves somewhat flustered is when we’d use the Pixel Stand in the same room as a Google Home or Google Home Mini. Specifically, there was no way to tell either device which we’d like to set as default.

For instance, we would prompt our Pixel 3 with a query which would normally pull up a video and the Google Home would pick up the command. The speaker wouldn’t know how to handle the request and the phone wouldn’t respond to it.

This didn’t happen often, but enough that we noticed the inconvenience. We’ve slowly started to add smart speakers and devices to our house and office and this issue could be worsened if not addressed soon. We would like to see some sort of setting in the Google Home app which lets us configure a “room” or “group” with default, or primary devices. 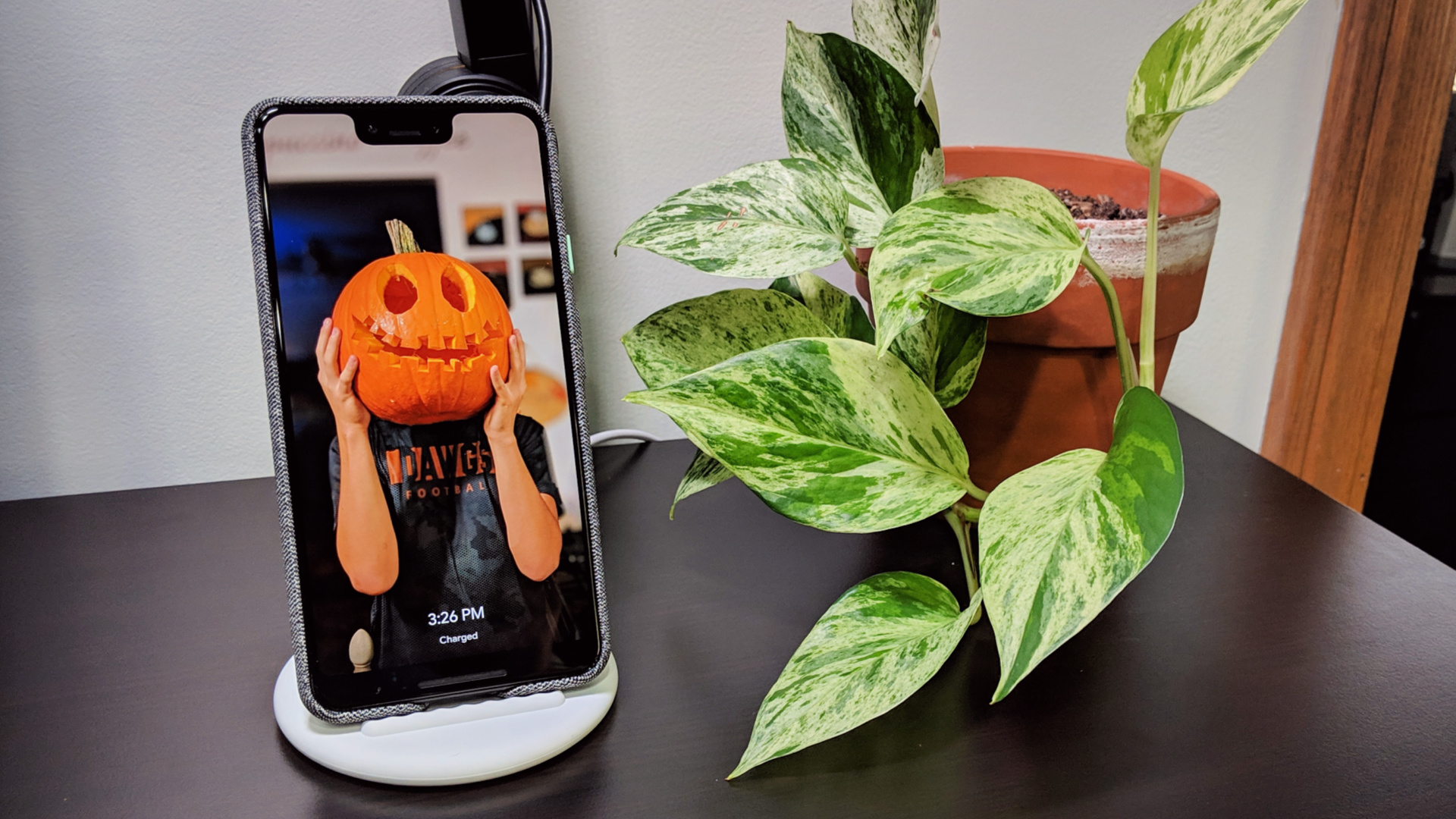 Use the Pixel Stand in your bedroom as an alarm clock and you’ll get another cool feature. Set the time to wake you up and your Pixel 3 will slowly increase the brightness with a yellow sun-like color that helps to pull you from sleep in a more gentle manner.

If charging is all you care about, and you really don’t want to be bothered, you can configure the Pixel Stand to take you off the grid, so to speak. It’s really simple to set up the “do not disturb” mode which silences everything and doesn’t bother you with notifications.

Given this is a charger, we should tell you about that aspect, right? Here it goes: it’s fast. Really fast.

The Pixel Stand comes with an 18W wall plug and USB Type-C cable. With up to 10W of wireless charging power for the Pixel 3 and Pixel 3 XL, it tops off the phones quicker than most wireless platters. 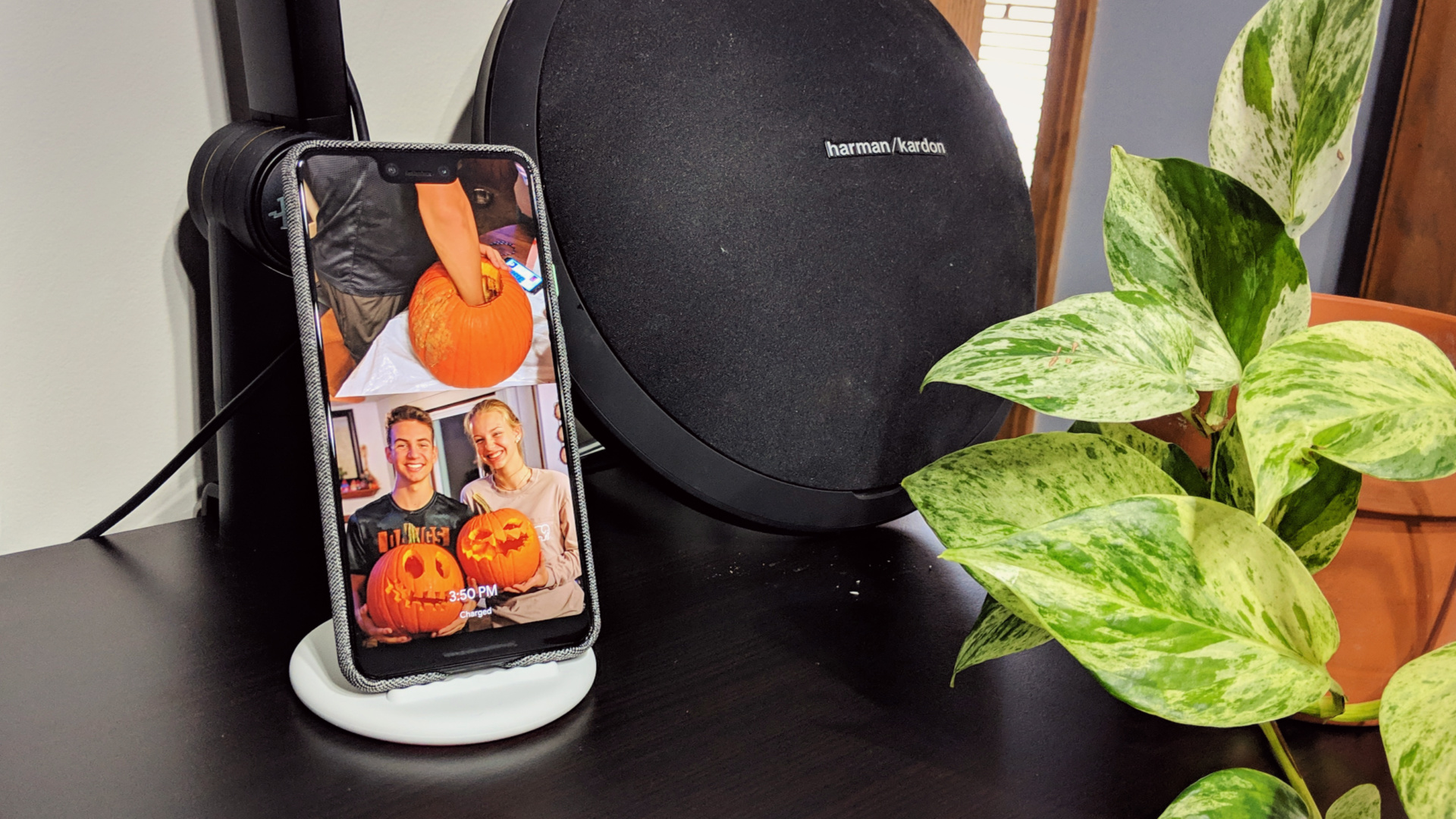 We found the Pixel Stand would charge our Pixel 3 XL at a rate of around 20%-25% after about 20 minutes on the charger. Given the size of the battery this was really impressive. This is one of those experiences that makes other chargers feel slow by comparison. We get the feeling that we’ll want this speed as often as possible, or at least in as many places as possible.

The Pixel Stand doesn’t come cheaply with its $80 price tag. If you’re just looking for a wireless charger, start elsewhere. But, if you have a Pixel 3 or Pixel 3 XL, you owe it to yourself to grab this one. The Google Assistant features, and other fun smarts, make it worth the extra money and further enhance that really awesome phone.