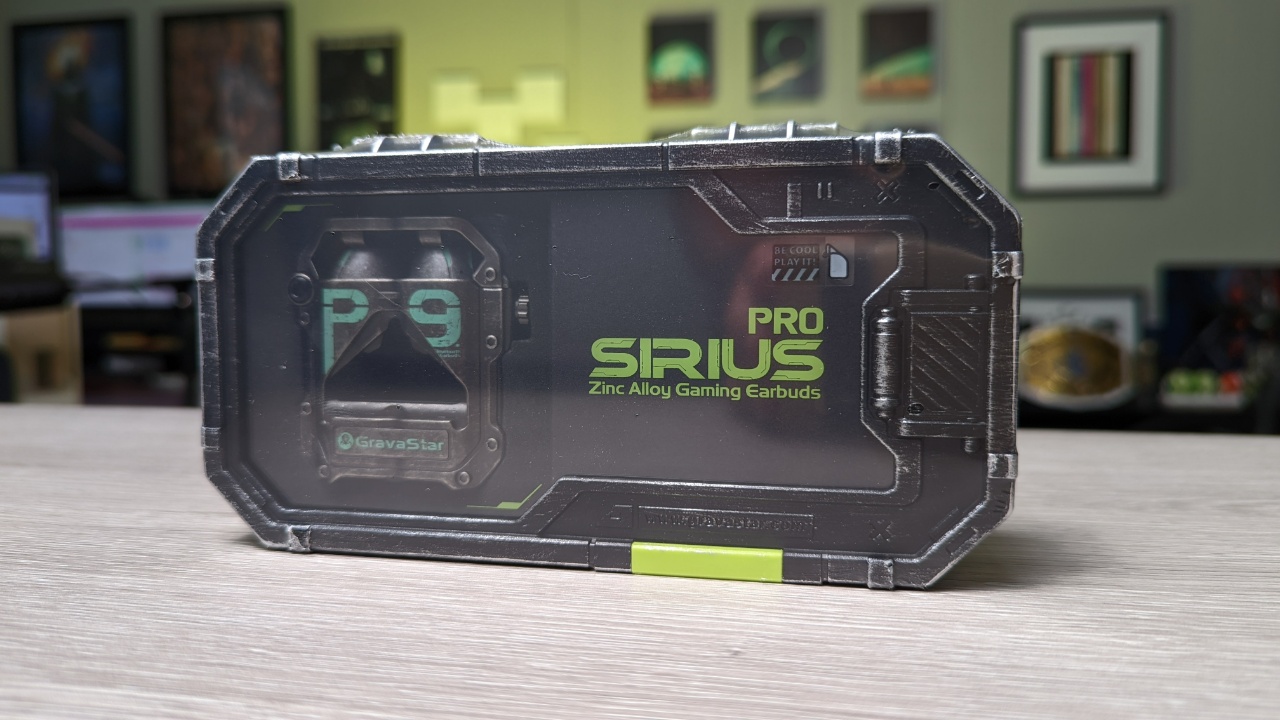 Wireless earbuds come in all sorts of price points but generally fall into but a few shapes and sizes. That is to say that many of them can be qualified as either having a bean shape or the AirPod-like design that features a stem.

Going a step further, most of what we see on the market are either black or white with the occasional oddball popping up. And while some of them are pretty stylish, few of them truly stand out and look truly unique.

GravaStar’s Sirius Pro, priced as low as $129.95, have a distinctly futuristic and post-apocalyptic design. They’re offered in a variety of colors, each of which looks like something you might find in a first person shooter video game.

The design of the earbuds and carrying case is really cool and different. Nearly every time I’ve had them out in public someone has noticed the case, usually asking what I’ve got on the table. The push-button release of the lid is pretty fun to show off and the war-worn look is popular among the younger demographic.

The Sirius Pro aren’t just about their looks; however, they pack a number of noteworthy features that make them a pair of well-rounded earbuds.

The earbuds are IPX5 rated for water and sweat resistance so they’ll handle a workout, run, or day in the sun without hassle. And should it rain a little bit, you’ll be okay.

There Sirius Pro earbuds pair over Bluetooth 5.2 and feature a 7.2mm dynamic driver with environmental noise cancellation to deliver a fairly loud sound without distraction. Similarly, you’ll have clear connections for calls without the other end having to deal with noisy ambient sounds.

Three modes (Gaming, Movie, and Music) offer up different audio experiences based on your needs. One has crisp, clear sound with deep bass, for instance, while another expands the sound to feel more wide at 5.1 virtual surround sound.

I’ve had no gripes with the audio on the Sirius Pro but I would have appreciated Active Noise Cancellation (ANC). Were that present I would probably have a new preferred pair of earbuds for mowing grass or riding my bike.

I do feel like volume could have been just a smidge louder at the top. But, I do appreciate that as loud as I would play music, the sound was consistent and even with no distortion.

It might take a few listens to get a feel for the touch controls but once you do, they’re relatively easy to understand.

Battery life is rated at four hours per charge with the carrying case offering up three extra charges. This puts it at around 16 total hours but that will vary based on volume levels and listening modes.

I’ve seen nothing thus far to make me doubt those claims as my review pair of Sirius Pro earbuds have been charged maybe twice in the last month. Charging is done via the USB Type-C cable that comes in the box.

Speaking of the carrying case, it’s a rugged and odd one, to be sure. To use a term from today’s vernacular, they might even be a little “extra”. It’s heavy and unique and can also be used as a bottle opener. Yeah, you read that right.

The only real complaint I have with the Sirius Pro is when it comes to pulling them out of the carrying case. It takes me multiple attempts to get any solid grasp of the earbuds to remove them. I’ve taken to licking my thumb and forefinger at times.

The GravaStar Sirius Pro are a unique package and make for an interesting option for younger listeners and mobile gamers. The design is a big part of the allure as the earbuds and case look like something you’d find in Edge of Tomorrow, Fallout, or any other war-torn environment.

The Sirius Pro sound good and have intuitive controls, but you may spend the first day or two understanding how they work. To that end, I like having different audio modes to choose from and think gamers might appreciate one dedicated to it.

The carrying case is a heavy unit that pulls double duty as a bottle opener, a bonus for some buyers. You might struggle from time to time with pulling the earbuds out but once you do, you’ll enjoy the experience.

Learn more about the Sirius Pro at GravaStar’s website where you can purchase them in a variety of colors. Choose from Matte black, Neon Green Space Gray, War-Damaged Grey, and War-Damaged Yellow.