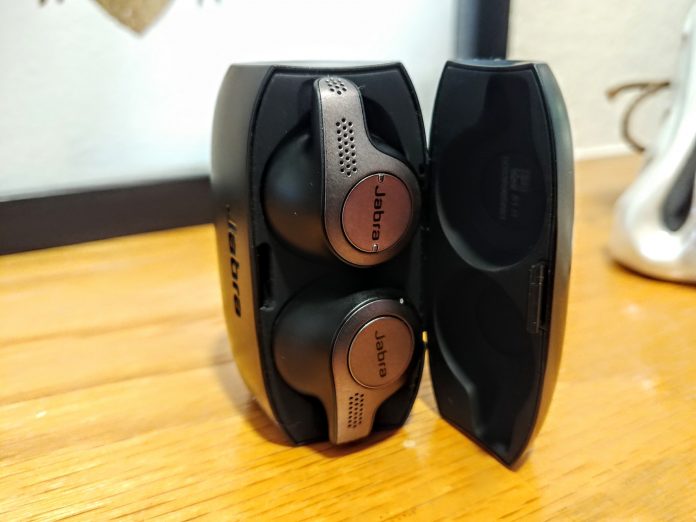 The Jabra Elite 65t is probably the best-looking set of truly wireless earphones I’ve tested. It sports gunmetal grey accents and a black semi-gloss body. The whole thing is plastic, but, unlike many earphones on the market, it doesn’t feel cheap.

The box includes three sets of earbuds in varying sizes, as well as a sleek, compact charging case to carry the earphones around in.

The most unique thing about the design of the Elite 65t, though is its shape. Instead of relying on the earbuds to hold the earphones in, or attaching bulky outer-ear hooks, Jabra engineered the 65t to fit into the Concha of the ear – that is, the inner ridge. The result is the easiest, most secure fit I’ve ever experienced in a Bluetooth headset of any design. And, while the earbuds fit my ear just right out of the box, I suspect that the shape of the earphones might not fit those with smaller ears – fortunately, ears are pretty stretchy. 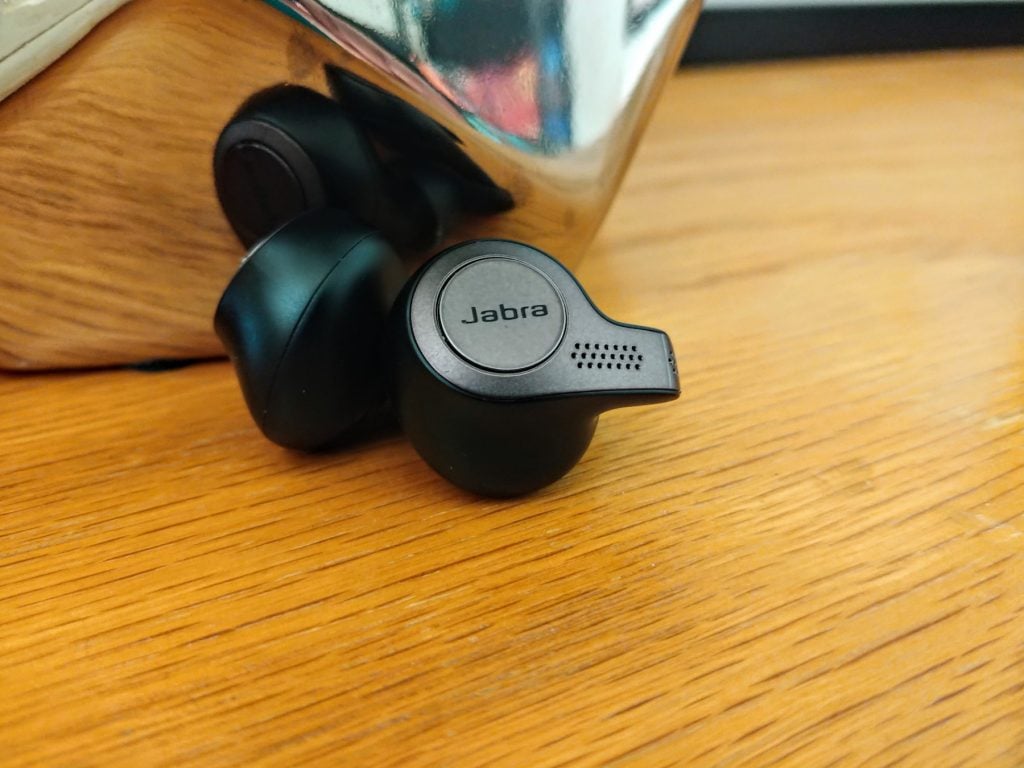 With an IP rating of IP55, the Jabra Elite 65t is neither totally waterproof nor sand proof. However, Jabra is confident enough in its durability that it offers 2 years of sand and water damage warranty. This requires registering the device via Jabra’s Sound+ app, but that’s very much a painless experience. 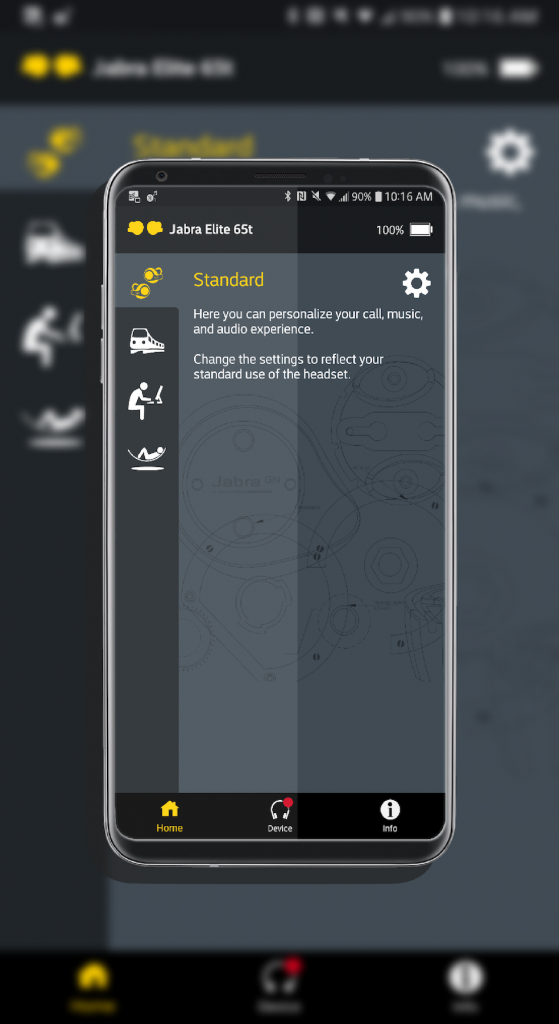 The Elite 65t has a pair of companion apps that you have to download in order for it to work. In fact, Jabra has a total of four apps on the Play Store right now – which by my count, is three too many.

The first app is Sound+, which you use to manipulate the 65t’s settings. Here you can manage your Audio Experience, Call Experience, and Equalizer Settings. You can also update your earphones and register them as mentioned above. It also displays connectivity information and battery levels, which is convenient.

The second is Jabra Service, which Sound+ uses as a database. Essentially, an app to make the first app work.  It’s a very convoluted setup that Jabra should probably fix ASAP. Unfortunately, when it’s running it also generates a persistent notification in the pull-down shade – my notification has been running for four days straight, despite only using the earphones a couple times in that timespan.

I’d much rather see a single app that detects which earphones you’re using, and automatically changes the interface to accommodate that headset’s features. A bit more complex to code, perhaps, but much more efficient and streamlined.

Of the truly wireless headsets I’ve tested, I think this is my favorite when it comes to sound quality. It’s got great sound clarity and depth right out of the box. Normally wireless earphones have a really tinny bass to them makes the sound feel hollow, but the Jabra Elite 65t has a rich depth of sound. It doesn’t hold a candle to a premium over-ear headset like V-Moda’s Crossfade 2 (which has a frequency range of 5-40,000Hz), but as far as truly wireless earbuds go, it’s quality. 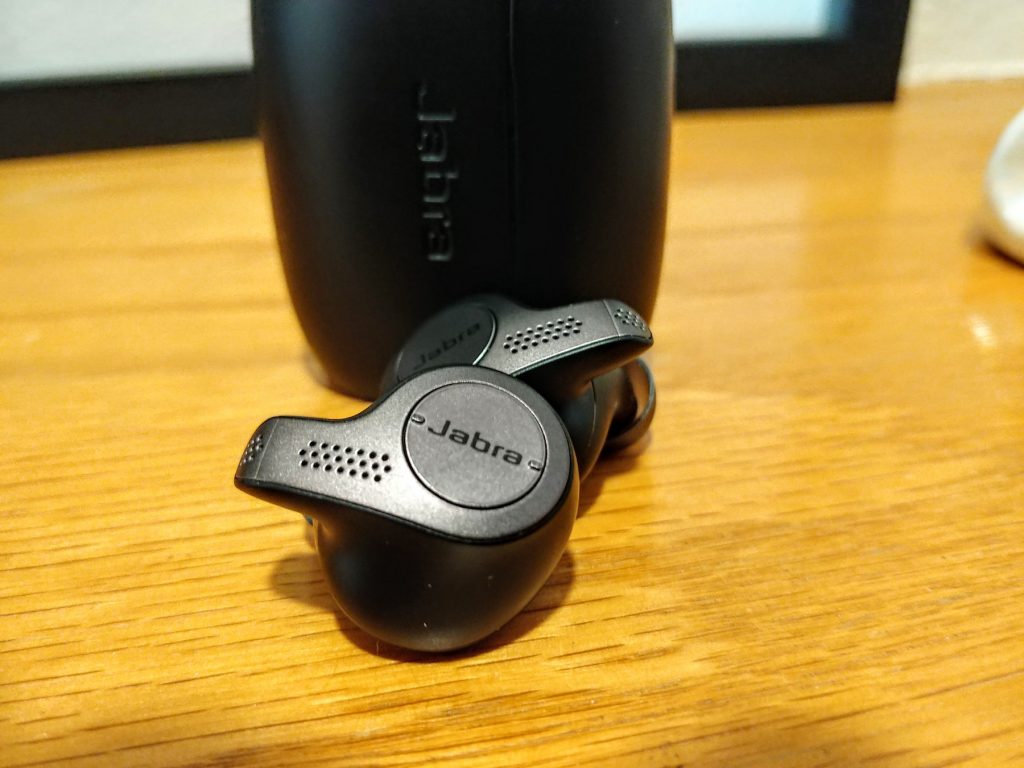 Perhaps the best thing about the Jabra Elite 65t is that it uses the state-of-the-art Bluetooth 5 standard for connectivity. Up until now, every headset I’ve tested has used some variation of the Bluetooth 4-series standard which, while still perfectly serviceable, is aging. Bluetooth 5 has a number of advantages over the 4-series, including transfer speed and range, which make it a far superior standard. Jabra’s use of Bluetooth 5 shows a commitment to making a quality piece of technology, rather than just a product. If it would just slap a USB-C port into the charging case instead of the tried-and-true MicroUSB, I might just fall in love.

The Jabra Elite 65t has a number of premium features (all configurable by the app): HearThrough (called Audio Transparency, elsewhere), Assistant (which launches AutoPause (in which music pauses when you remove one earbud), SideTone (also called TalkBack, where you can hear your own voice when on a call), and a manual equalizer. None of these features is truly innovative or unique, but they’re all value-added to an already well-performing headset. 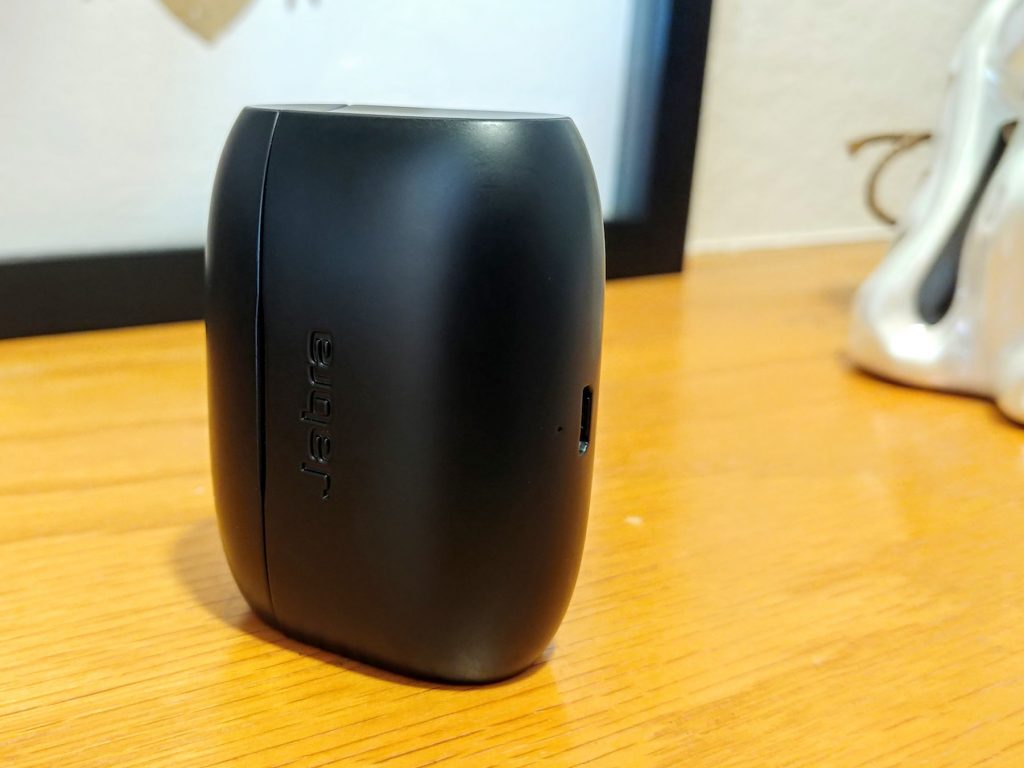 Prior to the Jabra Elite 65t, my favorite Bluetooth earbud case was the Rowkin Stereo Charge, a 2100mAh beast that has a full-size USB-A port to charge your phone in addition to the Rowkin. Though the 65t’s charging case doesn’t have that feature, it does take the trophy for the smallest, most pocket-friendly charging case around.

It sports enough juice to charge the 65t twice – which is impressive given the size – totalling 15 hours of use. The case’s hinge is really interesting. It’s basically impossible to pry open, but once you know the trick you’ll open it with ease every time. The hinge essentially has two stages, and pushing inward on the front of the lid disengages the latch, allowing it to swing upward. It’s got two LEDs, one on the lid, one on the bottom, that display the battery life of the case and the earphones, respectively.

Rant time, though – Jabra made an impression by including Bluetooth 5 on the 65t, and I really hoped as I was opening the box that it would think to use a Type-C port on the charging case, to show how forward thinking it was. No such luck, as it used the same old MicroUSB we’ve come to resent as more and more phones turn toward USB-C as the standard of choice. Pity.

Truly wireless Bluetooth earphones are a mixed bag, price-wise. On one hand, you absolutely have to spend a decent amount of money to get a decent set of earphones. A little $30 pair just won’t cut it.

At the same time, there are a lot of companies out there that seem to think their headphones are the absolute cream of the crop, and price their products as such. Finding a product that’s both great-sounding and not overpriced is tough. As such, I think you should expect to spend upward of $100 to $150 on a pair, if not more – assuming the quality of sound and stability of connection matter to you.

I’ll be brief, here – the Jabra Elite 65t retails for about $169.99, and it’s worth it at that price point. It’s a great-sounding headset with a strong selection of features and a company updates them frequently. I reviewed a few other earphones around this price – Syllable’s D9X, Yevo 1, and Optoma’s NuForce BE Free 8 come to mind – and the Jabra Elite 65t outperforms all of them.