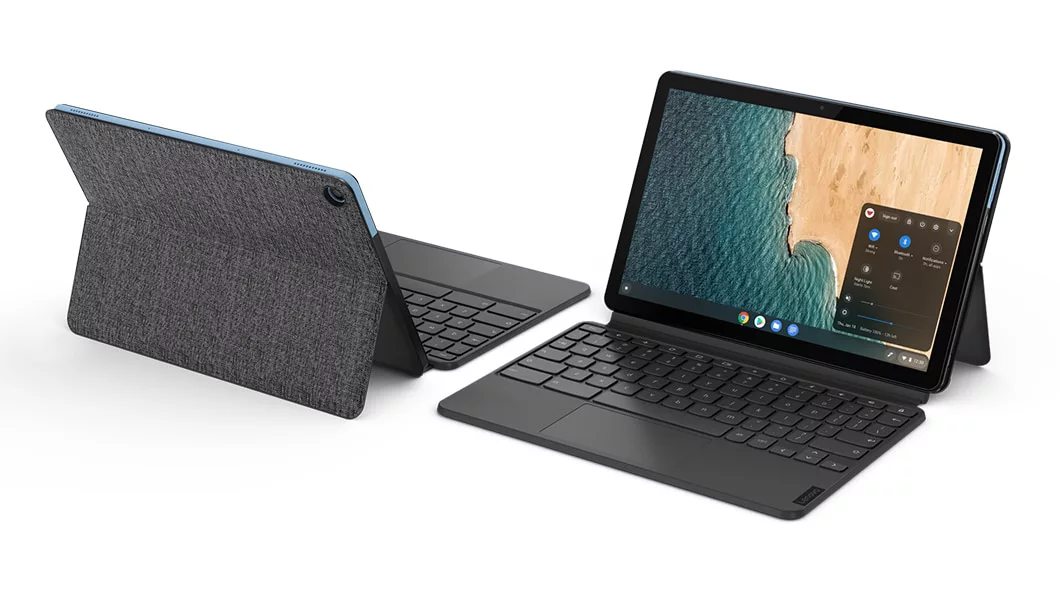 As someone who loves large, sharp displays, powerful processors, and oodles of storage I have to admit that I miss the days of netbooks. If you are too young to remember, netbooks came out in the late 2000s which were more or less low-powered mini laptops. They were popular on college campuses for their portability and ease of use. Alas, they’ve long since died out with the rise of smartphones, tablets, and ultrabooks taking their place.

The question really is, did Lenovo have to cut too much out of this device to keep it cheap, or did they strike the right balance of features to make you open up your wallet?

It really doesn’t matter what kind it is, but if it’s a tablet in 2021, it’s going to get compared to the iPad. The iPad is such a force of nature that it has dominated the market for over a decade now. Can you believe the iPad came out 11 years ago?

This is not an iPad. It’s not an iPad competitor or clone or ripoff. The Lenovo Duet is its own device and there’s really not a lot of other comparable devices on the market right now.

First things first, the Duet comes with Chrome OS, not Android. You get all the advantages of Chrome OS like quick boot times, lack of viruses, great battery life, etc.

I’ve used Chrome OS semi-regularly over the years but Lenovo says this is the first tablet to launch with a version of Chrome specifically designed for convertibles.

The Duet includes a few special modes like Type Mode, Watch Mode, and Browse mode. I wasn’t able to find a real difference between Browse Mode and Watch Mode, but you do get special navigation gestures in these two modes to make it easier to get around the OS when the keyboard isn’t attached. It’s supposed to give you access to the app doc through a short swipe up, your normal long swipe up to go home and to access the recent apps.

There’s also a split-screen mode that in theory should make multitasking easier but often falls short due to apps not displaying correctly in this mode. Type Mode is exactly what you think it is.

The OS feels like an unfinished project and that’s not necessarily a bad thing. Android and iOS didn’t come out of the gate in the state they’re in now and Chrome OS shouldn’t be expected to work on convertibles perfectly right now either.

I have no doubt that Google will continue to make progress here and refine the system to work better with all sorts of hardware. The Duet is just the first out of the gate and if you pick one up, you may feel a bit like a beta tester.

That leads us to apps, which are still a mixed bag. Most apps I used were totally fine on Chrome OS. All of the Android apps that I downloaded would at least launch, though some experienced some weird scaling issues; some would lag from time to time.

Google’s first-party apps like Chrome, Photos, and others were great and I never had an issue. I tried to use some productivity apps like Office and some games like Among Us that would crash from time to time but were overall a good experience.

The good experience extends to the hardware on the Lenovo Duet. I can’t tell you how impressed I was with the build quality of the tablet as well as the included kickstand and keyboard. At $300, the Duet has no business being this well-built.

An aluminum alloy body houses a single USB C port, front and rear cameras, and a 10-inch, 1080p 16:10 display. And all of that is under one pound without the keyboard or kickstand attached.

With things securely attached via magnets, we’re at just above two pounds, which is basically nothing. The rest of the key specs include 4GB of RAM, 64 or 128 GB of storage (non-expandable), and a battery rated for 10 hours of use. It is powered by a MediaTek Helio P60T Processor, which is just powerful enough to get all your tasks done without killing the battery prematurely.

Not too bad at all, though I think the exclusion of expandable storage and a headphone jack, even on a budget device, are not excusable. This is a device that’s designed to get some work done and those two things would make it infinitely easier to move files from device to device and connect headphones or a headset to use for video conferencing.

Speaking of video conferencing… I found the experience to be not bad. The system doesn’t quite have enough horsepower to do much else while you’re on a call, but the front-facing camera is better than you’d expect for a 2MP shooter. The speakers do a good enough job of pumping out the audio.

If you’re in a crowded place, you should be using headphones anyway, but you will definitely want to bring some along with you because the speakers aren’t the loudest. Additionally, if you plan to take the Duet on the go, be aware that the screen isn’t super bright and can be hard to see outside in very sunny environments. I suspect you’ll be fine most of the time, though.

I’ve been using the Duet mainly in the kitchen. And quite often. As I endeavor to be lose weight, I’ve gotten into cooking and food prep quite a bit more — the Duet has been a fantastic companion for that.

The kickstand is stiff and doesn’t lock into place which is great because I can angle it however I need. The fact that it’s a touchscreen and I’m not forced into using the keyboard attachment means that I can get my hands dirty, press something on the screen and easily wipe it away when I can get to it.

I’ve also found that little touches super helpful such as being able to unlock the Duet when it’s paired to my phone.

I would love to tell you the port selection is as good as the rest of the tablet but unfortunately, it isn’t. The single USB C port is a big hindrance unless you invest in a dock. And sure, if you’re only dropping $300, I suppose you have some extra cash to invest into one but I feel like Lenovo should have done better here.

Charging up the tablet means your ability to connect peripherals is nil and we need to remind ourselves that Lenovo is positioning this as a device that allows you to get some work done. There’s no microSD card slot so the only choice we have for additional storage is either via the cloud or an external drive.

The entire story of the Lenovo Duet is compromise and just how much you’re willing to make. $300 is not a lot of money for a device like this, but it is smaller than a cheap ultrabook and the processor is somewhat underpowered.

Sure, it gets most of your tasks done with ease but opening 10+ Chrome tabs, video conferencing, or exporting a video or graphical file is painful at times.

The battery life is fantastic at over 10 hours of use but the included charger takes forever to charging this thing back up. You’ll want to charge it overnight and you better hope you get a good night’s sleep.

Personally, I really enjoyed my time with the Duet and I’ll probably pick one up for myself. It scratches that itch of quick productivity, but it also delivers a good second screen experience when I’m sitting on the couch or when my daughter wants to watch something while we’re out at dinner.

It generally lives either in my work bag, where I do not even notice its presence, or in the kitchen where I use it almost every time I walk in to make some food. I’m never going to try and game on this thing nor do I expect to do heavy video editing. That’s just not what it’s designed to do.

At $300 or less, I don’t think you’re going to find much better than this on the market in the next year or so. It’s a great device to hand to your kids to get some school work done, entertain them, or bang out a quick work email without firing up your computer. I just wish Netbooks were this good back in my day.