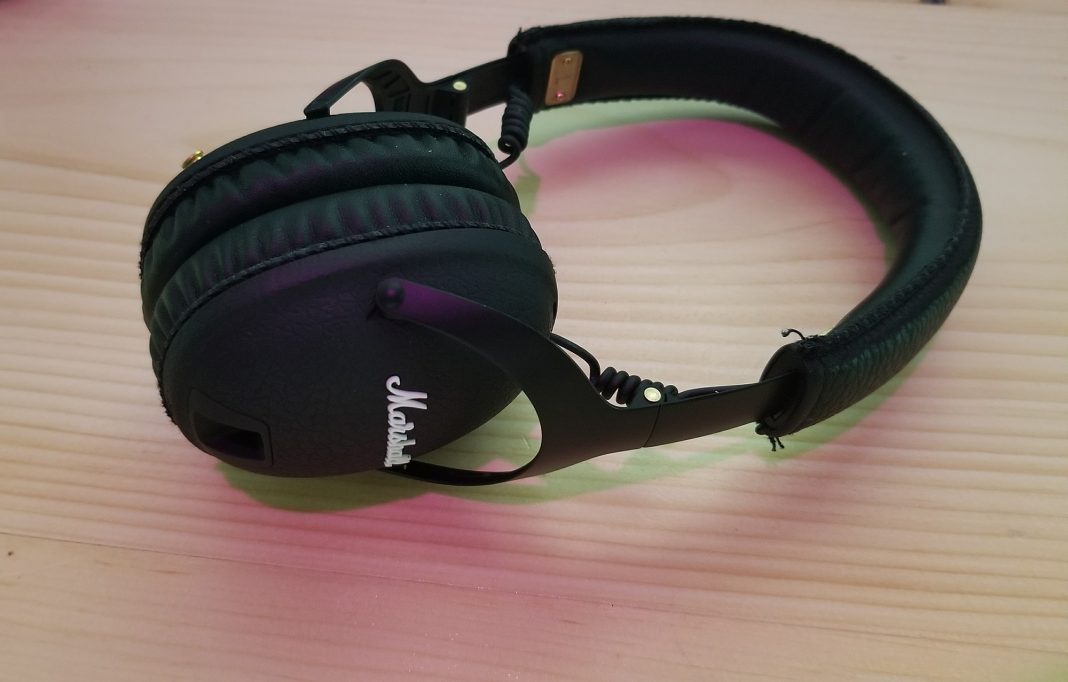 Marshall is a name that you’ve more than likely heard before. It’s been well regarded for the better part of the 55 years the company has existed for the quality of it’s products. The English outfit has been best known for amplifiers and speaker cabinets but recently made a strong push into the personal Bluetooth headphone space.

We recently took a look at the Marshall Mid On-Ear Bluetooth Headphones and came away extremely impressed with the quality of not only the build but the sound too. Today we’re taking a look at its sibling, the Monitor Over-the-Ear Bluetooth Headphones. We’ve got high hopes for this pair of headphones based on Marshall’s reputation and how much we loved the on-ear headphones.

If you’ve ever seen a Marshall amp, you’ll agree that the Monitor Bluetooth headphones are unmistakably Marshall. The hard, almost cracked, black vinyl that Marshall places on the outside of its equipment is prominent on these headphones too. Both the outside of the ear cups and the headband feature the vinyl and it looks absolutely fabulous. In a world where soft leather or hard plastic are the norms, the vinyl stands out in the crowd.

The ear cups are connected by a strong metal band that has stood up to some abuse since I’ve had it. Each side has 13 separate satisfying clicks to extend or retract to find the perfect size for your head.

When the headphones are just sitting by themselves, they look very small and I was initially worried about them fitting comfortably on my decently-sized (okay, big) head. The fit was a bit tight for the first few hours but the headphones have since broken in a bit and now I find the pressure very comfortable. That small size, in addition to the earcups folding up, make for a small package during transport. If you’re pressed for space in your bag or purse, these are a nice option for a full feature set of headphones that don’t take up a ton of space. 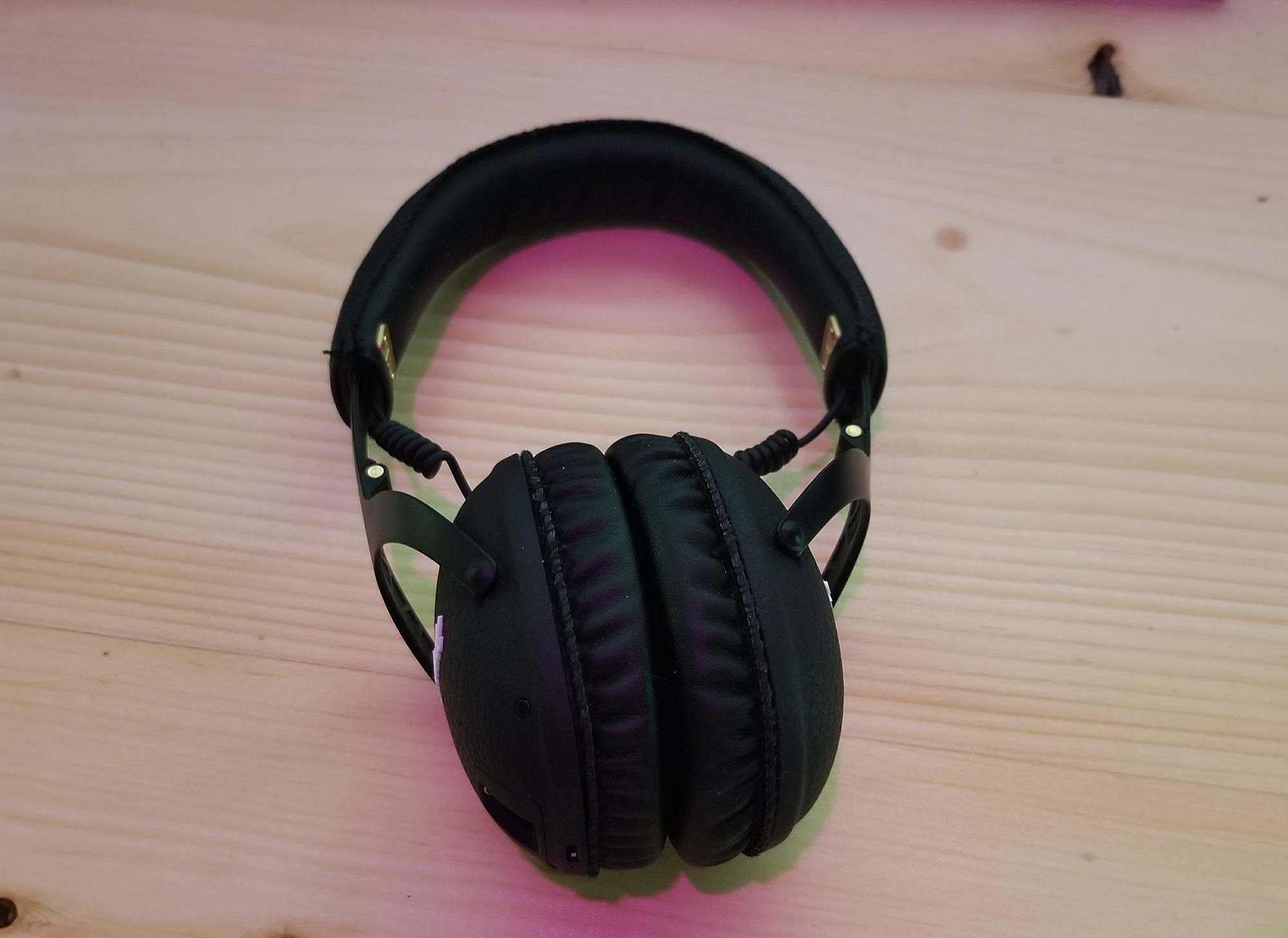 What I don’t necessarily find comfortable is how the cups fit around my ears. Marshall did well by selecting a nice soft leather for the ear cups, but they’re just a bit small. I don’t have big ears at all, but my ear lobe routinely gets pressed down by the cups and forces me to wiggle them around until my ear fully fits into the cup. If the cups were just a little bit bigger or a little more rounded instead of the oval that they are, this could be avoided. 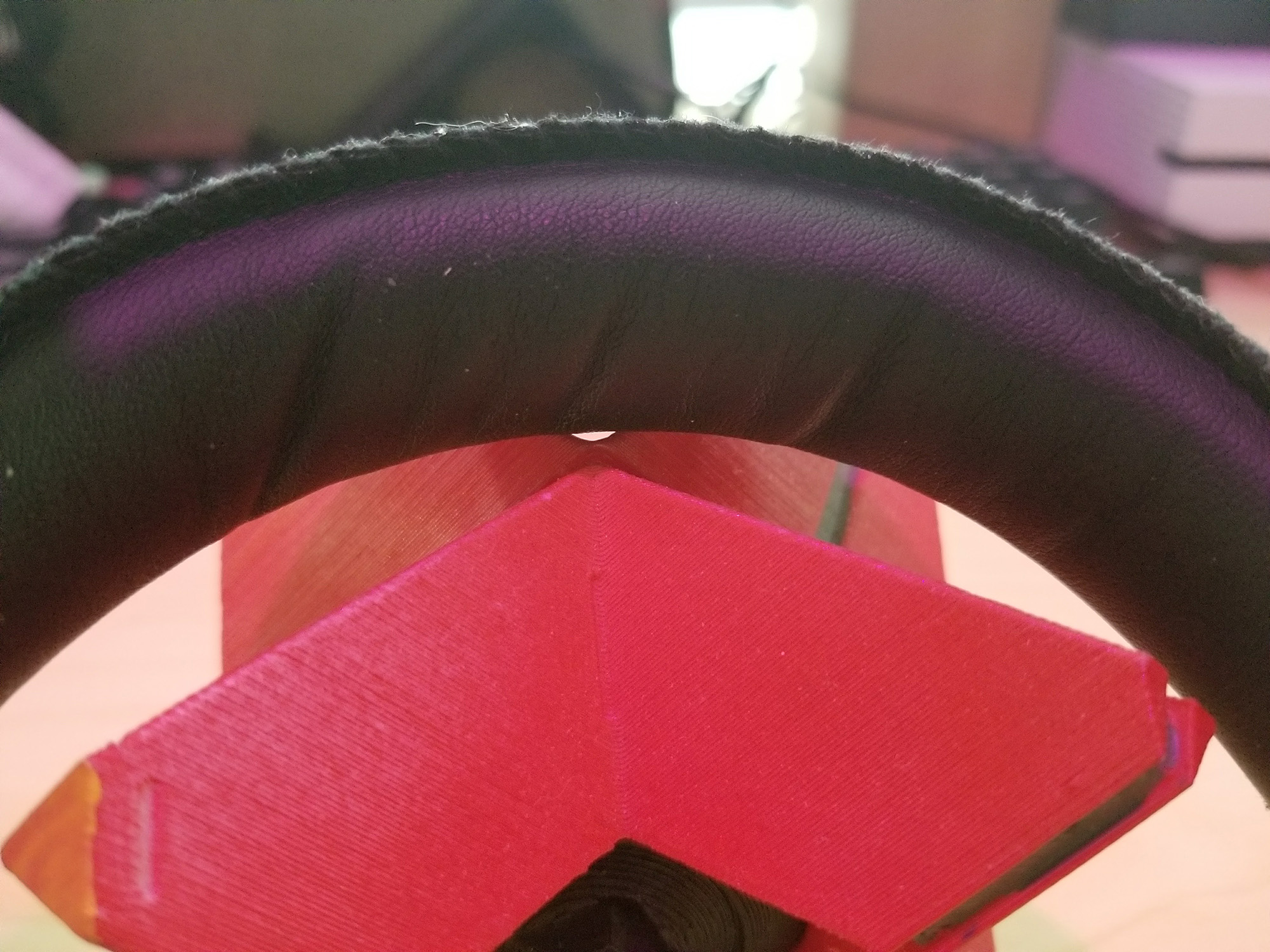 I do love the finishes on these headphones, even if they aren’t the most comfortable in the world. The headband is vinyl on top, but a nice soft leather on the bottom which makes for a comfortable fit and the stitching that binds the two looks great. You’ll find brass accents on the inside of the headband indicating the left and right side of the headset as well as a brass button on the left earcup for power, volume, and the ability to skip tracks. 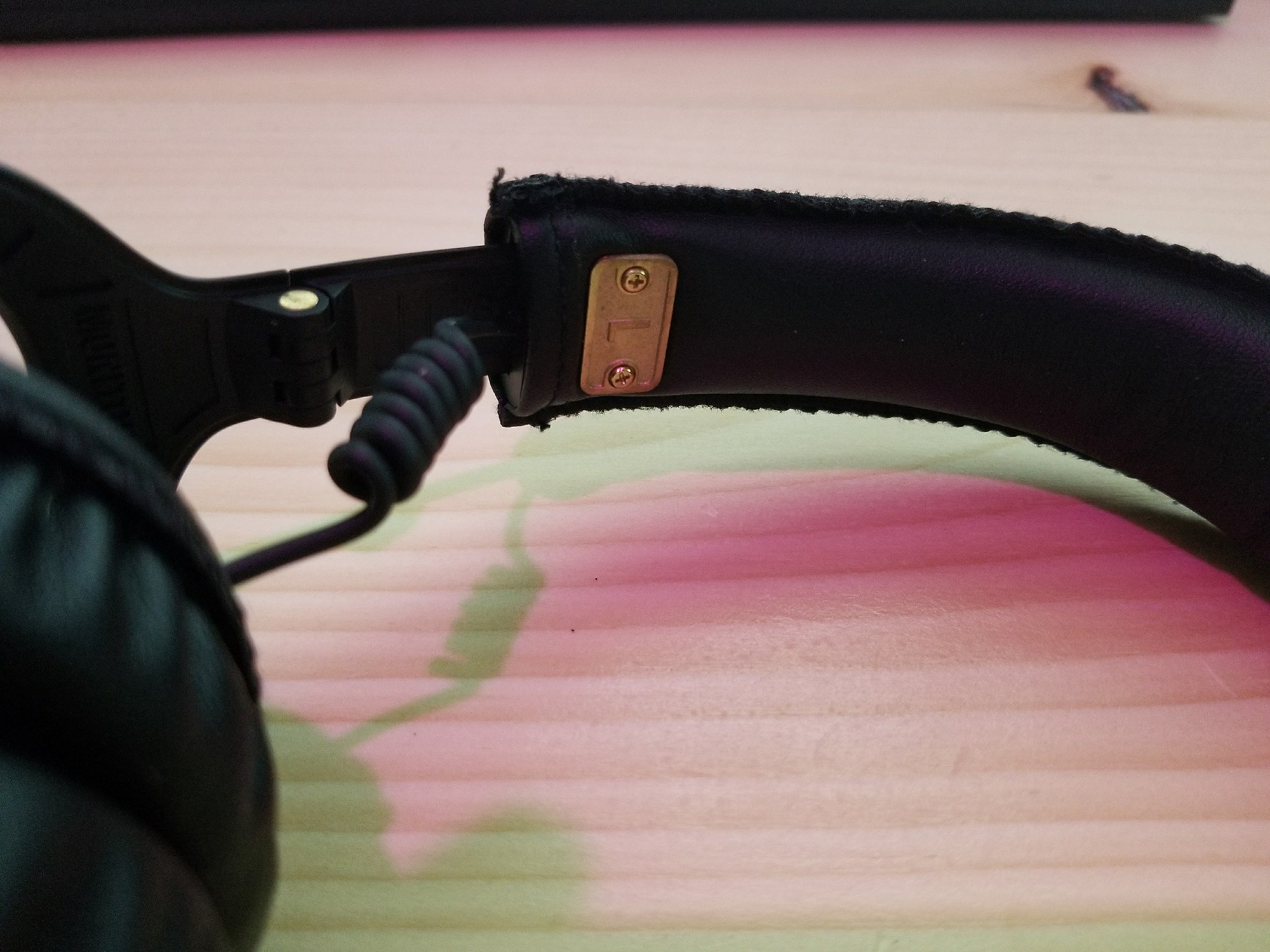 All-in-all, the Marshall Monitor Bluetooth Headphones are extremely well made and mostly comfortable. I like a lot of the design choices Marshall made and I believe that due to using materials like vinyl and metal it’ll stand up better to abuse and last longer than other headphones that have gone with plastics and cheap leather substitutes instead.

These headphones are simple. You get one button and that’s all you really need. The brass button that sits on the left earcup is responsible for all of the functionality of the headset. Pressing it in will turn on the headset (indicated by a white light) and a long press from an off state puts it into pairing mode (blue light). And yep, you guessed it, holding the button while the headphones are on turns it off too (red light).

While the headset is on, you can raise and lower the volume by moving the knob up and down. Skipping tracks is as easy as moving the knob front toward your face (skip backward) or back toward your head (skip forward). A quick press down will pause or play your track while a double press will open up Google Assistant. If you’re using the headset while you get a call, a press down of the button answers and ends the call. The microphone in the headset sounds pretty good too, according to those I spoke to while testing the headset.

I like how Marshall set up the headset with a single button, my only complaint is that it can be a bit mushy to press and you don’t quite know when you’ve pressed it far enough. It’s a minor complaint, but it still could be improved upon in the next hardware revision.

As for the audio quality, you’re going to get top-notch performance here. The “Monitor” in the name of the headset indicates that it’s tuned to give you the most accurate representation of the audio you’re listening to possible.

All headsets have their own signature, the two most popular probably being Beats’ bass heavy signature and Sennheiser’s balanced signature. Marshall has done an excellent job staying true to the “monitor” signature here and I couldn’t be any more impressed with the sound I’m getting out of these Bluetooth headphones.

Bluetooth headphones generally don’t fair as well as wired headphones but these Marshall cans are just simply awesome. Bass isn’t lacking at all, but it’s not emphasized. If you’re a basshead, maybe pick another pair that will artificially enhance your bass. The mids and highs are well represented and make classical and vocal driven tracks sound fabulous. Spoken word is another standout with high-quality podcasts sounding excellent. 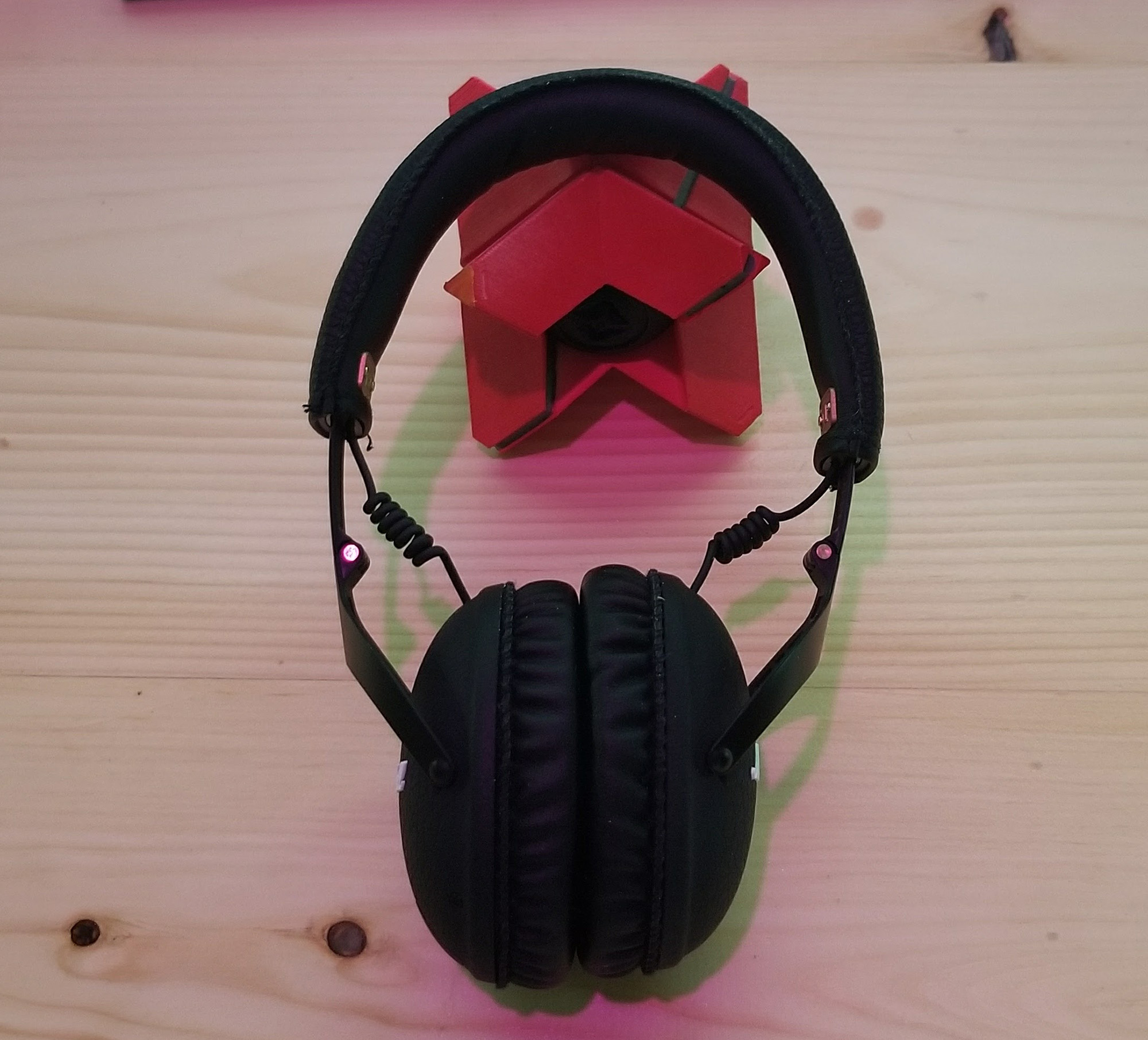 I’m not an audiophile. I do, however, love high-quality audio. Music is my escape and it takes me to places that I’ll never be able to visit in person. The fields of Woodstock in 1969, the recording studio at Abbey Road, the front row at Wembley watching Freddy Mercury transfix 150,000 people, or Sun Studios in Memphis where Johnny Cash got his start…

Music is the most powerful thing on earth and I feel like I’m a part of it with the Marshall Monitor Bluetooth Headphones on.

If you’re interested in picking up a pair, you can find them at Marshall’s website, Amazon B&H Photo, and Jet.com. 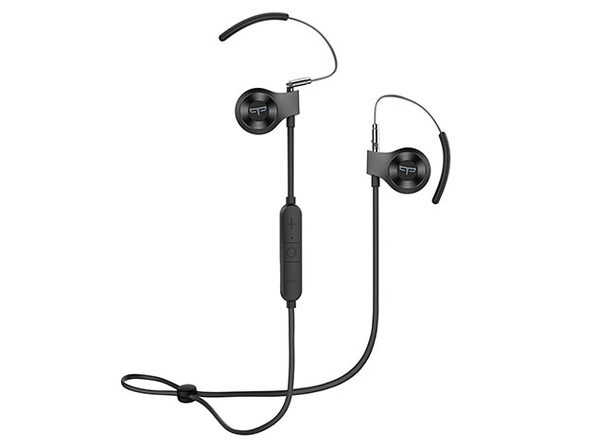 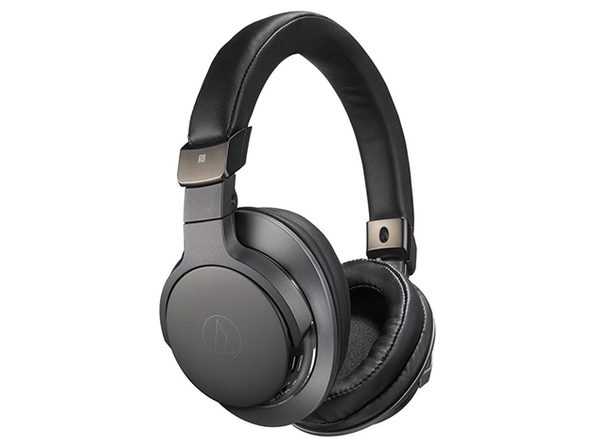 These Audio-Technica headphones drown out your work from home distractions