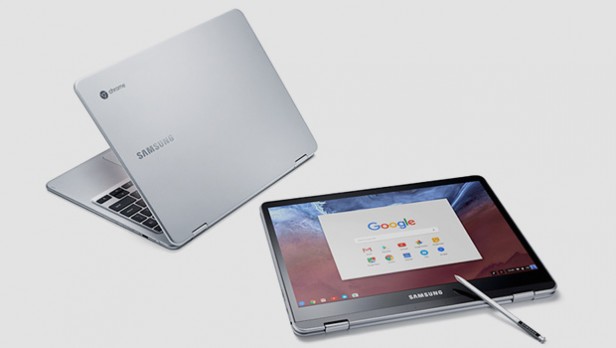 The Samsung Chromebook Plus is one of the newer Chromebooks on the market and one of the first to feature the newest version of Chrome OS that now supports Android apps. Samsung also released a “Pro” model for $100 more that features a more powerful Intel processor. Both laptops are otherwise identical in terms of looks and features.

If you’re not familiar with Chrome OS, it’s essentially an OS based on Chrome, the web, and cloud-based platforms of Google Drive. You can’t run Windows or MacOS applications on it, but you can now use select Android apps on it, almost making it a hybrid OS.

As far as the setup for the Plus is concerned, it’s as easy as logging into your Google account and organizing your desktop to your liking. The device is familiar if you have ever used a Chromebook before.

Design-wise, the Chromebook Plus is quite a looker. Featuring an all-metal design and an understated, simple overall appearance. It’s very thin and light, which is great for portability. It’s reminiscent of a Macbook at first glance, which is high praise for a Chromebook in my opinion. The Plus is a 2-in-1 convertible tablet Chromebook, with a smooth and sturdy hinge that allows you to flip the screen onto the back and use it as a tablet.

The Chromebook Plus is a premium Chromebook, to be sure, at $449. The features it offers reflect that, with an outstanding high-resolution touch screen, USB-C connectivity, and a built-in stylus. The screen is a standout for sure, with its 12.3-inch 2400×1600 resolution and 3:2 aspect ratio. It seems bigger than it actually is due to the aspect ratio, which is great for everything except watching 16:9 videos, which have black bars around the borders. Otherwise, the screen is excellent, bright and colorful as expected from a Samsung device, and the touch and stylus response are good as well.

Here are the rest of the specs:

Performance is excellent on the Plus. With an ARM processor, you’d expect some shaky stuff when heavy web browsing, but the Plus has yet to break a sweat with multiple tabs open and android apps running alongside them. It may lag a bit when swapping apps or scrolling but it’s yet to be a real issue for me in regular use. Android apps running on the ARM processor are, for the most part, fully functional. Certain apps don’t play nice with the larger screen and Chrome OS, I’ve had some not work properly or outright crash on me. Fortunately the more popular and commonly used apps I tried like Slack, Facebook Messenger, YouTube, and Netflix work fine.

Battery life has been basically as advertised, and sometimes better! The Chromebook Plus effortlessly got me through a whole day of use and averaged about 8-9 hours. I took it on a cross-country flight to San Francisco and watched movies the whole way with no issue as well, never having to recharge on the six-hour flight. Points to Samsung on this one. Speakers were decent, if unimpressive, but thankfully Samsung had the courage to include a headphone jack on this device that works just fine. 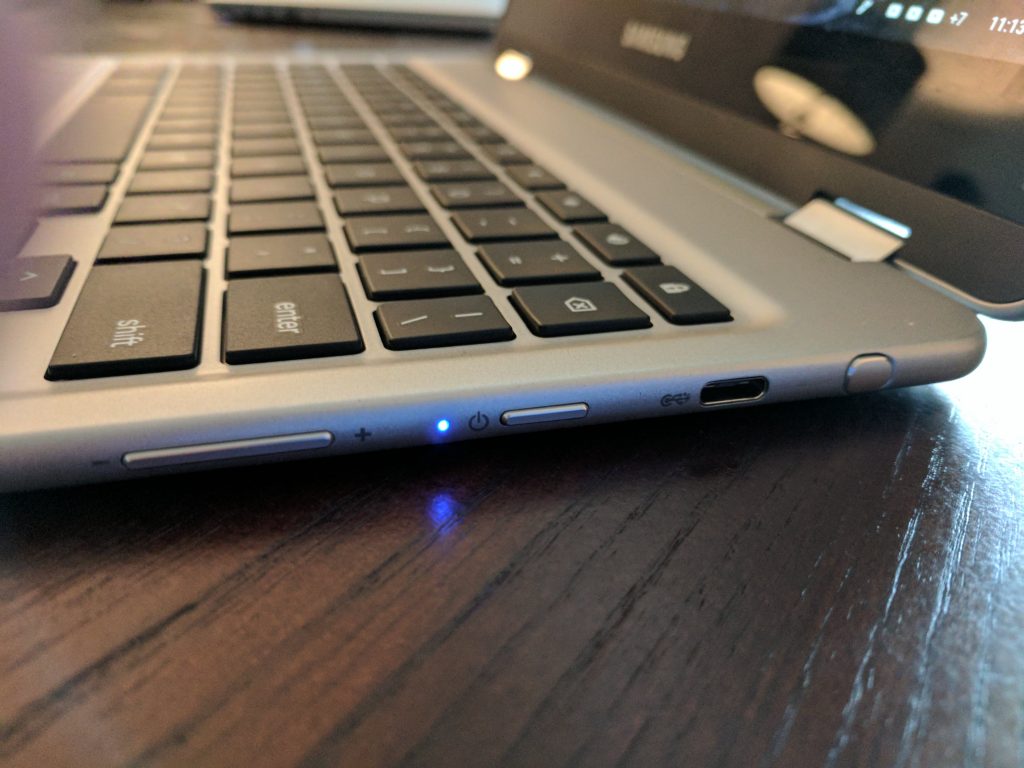 The keyboard and stylus are the last things I want to comment on. The Keyboard is a standard Chromebook layout, with a search key and function row tailored more for web browsing. The keys feel decent and the layout is very comfortable, save for the small backspace key which takes getting used to. I typed this whole review on the Chromebook Plus itself with minimal issue. The stylus feels great to use, and is a blessing for navigating the touch screen, especially when in tablet mode. Taking the stylus out opens a menu for screen capture and other handy modes that are familiar if you’ve ever used a Samsung Note phone. The stylus is an excellent addition, and one of the standout features for me.

I have to say, I was never a fan of Chromebooks before. Being a PC enthusiast and always having a powerful desktop or Windows laptop handy, I never saw the need to pick one up before.

The Chromebook Plus changed all that for me.

It has so far been an excellent travel companion and work machine for when I want to get stuff done without being stuck at my desk. The addition of Android apps makes this an excellent laptop replacement and workstation for getting writing done. I’d say it’s definitely a strong showcase for Chrome OS and one of the best Chromebooks ever made, if you can justify the high price tag compared to the competition.