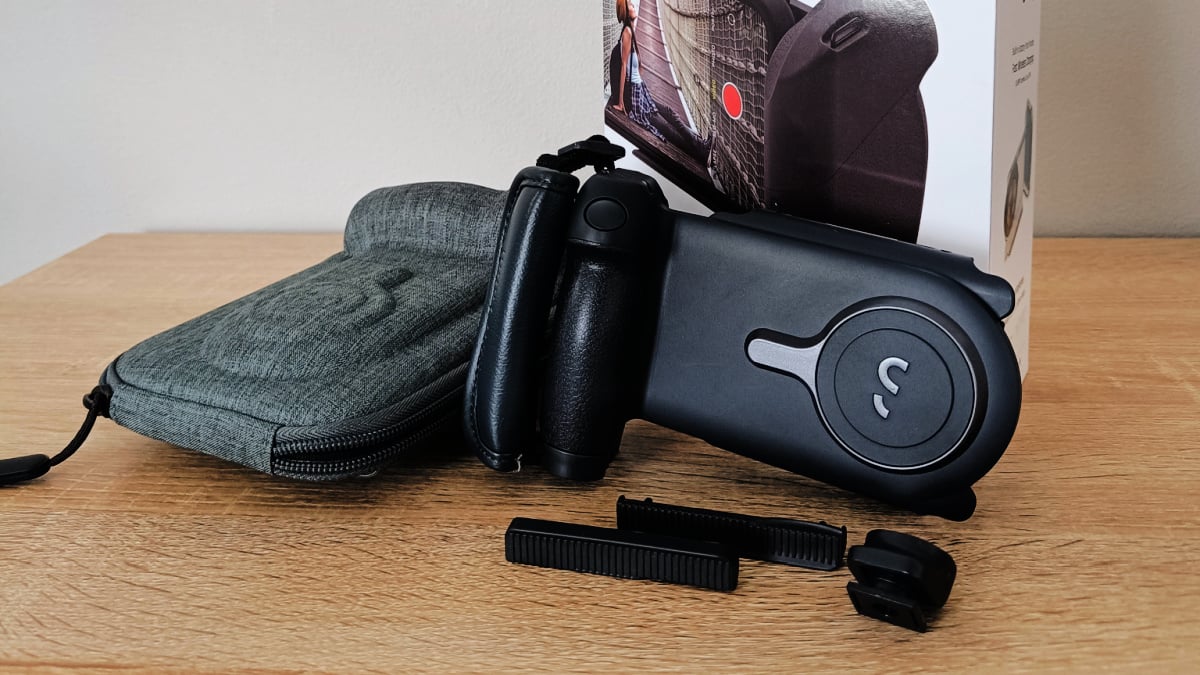 One of the key areas in which smartphones continually evolve is in the area of cameras. Whereas not all that long ago we had one rear camera with a 12-megapixel experience, today’s handsets routinely have three and four shooters. And it’s not just about the number of cameras.

More and more we find software advances and AI to take the hardware capabilities and push it even further. There’s way more at play than just bullet points and megapixels.

Despite these advancements, we still operate our phones the same way. That is to say that we hold it in our hand portrait mode for TikTok and Snapchat and turn it on its side for YouTube and long-form videos. And even with optical image and video stabilization, we ultimately end up with less than smooth video.

Surely you know that using two hands is better than one when it comes to stabilizing our phones for recording. But did you know that there are accessories that make it so that you can hold your phone in a more comfortable and natural manner?

The ShiftCam ProGrip is the sort of mobile accessory that would-be filmmakers and vloggers should have in their arsenal. It’s a jack of multiple trades that makes it easier to record better video.

In short, the ShiftCam ProGrip is a Bluetooth accessory that pairs to your phone and then locks it into place. It features a grip for the right hand that feels very much like holding a DSLR camera. It’s got just the right angle to feel comfortable and secure, never straining the wrist.

Similarly, there is a thumb rest to make it feel natural to hold onto the unit. Located near that is a shutter button which, when paired to your phone, makes shooting feel more intuitive.

To stop here would still make it a pretty cool device worth keeping around; however, there are a few other features we like. One, it has an internal 6400mAh battery which can be used to power your phone. That’s awesome, especially if you’re capturing quite a bit of footage. In essence, it’s like having a pair of extra batteries for most mid-range phones.

Users can tap into the battery by directly plugging into the USB port or, if their phone allows for it, use Qi wireless charging. That’s zero cables to mess with and a power source that slowly pours back into your handset.

Other cool features we appreciate are the shoe mount for adding a light or external microphone and the universal tripod mount. So, if you’ve already got a few accessories in your bag, chances are you can use them with the ShiftCam ProGrip.

Switching from portrait to landscape shooting is as easy as rotating the phone in the clamp. Speaking of which, the unit can handle pretty much any phone size you throw in there, even with protective cases.

The ProGrip is also compatible with ShiftCam’s family of lenses. Available separately, and as a bundle, you can pick up a telephoto, fish eye, macro, or other lens for your phone. Although we did not get a chance to test those out, we can imagine these making for very interesting video content.

You can learn more about the ProGrip at ShiftCam’s website where you can also purchase one for yourself. Sold by itself it runs about $120 but for the extra ($30) money you gain a hand strap, carrying pouch, cold shoe mount, and adapter.