Mobvoi has made a name for itself over the past few years making several high-quality accessories, including its popular lineup of smartwatches and headphones. In fact, we’ve previously reviewed the TicWatch Pro 4G and TicPods 2 Pro here on our site. Now, Mobvoi has provided us with a pair of the standard TicPods 2 for review.

There’s nothing too unique about the design of the TicPods 2; they don’t do much to stand out in a crowd of other AirPod clones. However, I was immediately impressed by how lightweight the buds and case are. After trying several pairs of true wireless headphones over the years, the TicPods 2 buds and case are among the lightest I’ve used. 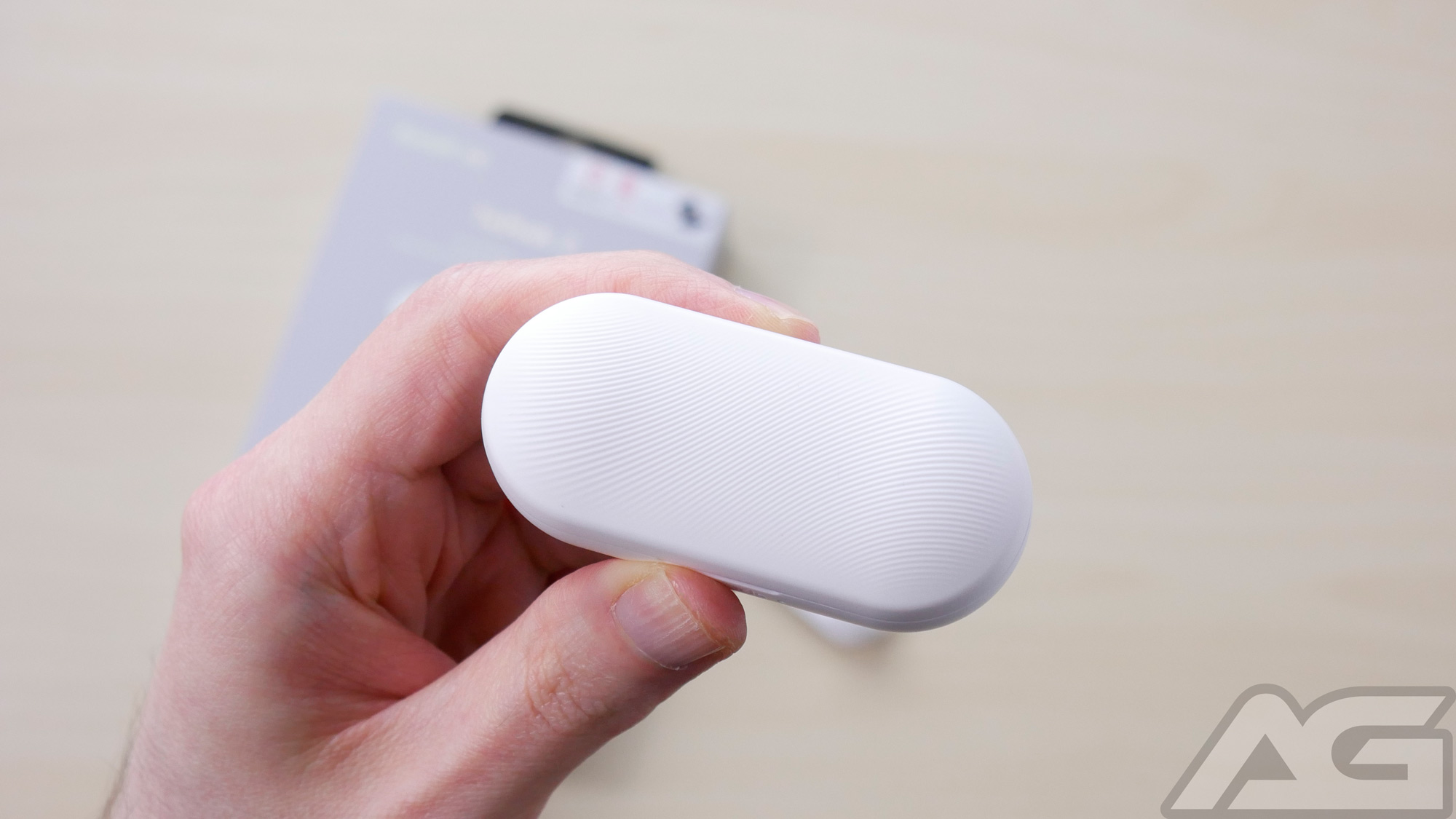 The case itself is a pillbox shape with two LEDs on the front used to convey battery life and Bluetooth pairing status. On the back, you’ll find the USB-C port for charging. Most Bluetooth headphones I’ve reviewed still use the outdated micro USB port, and I give Mobvoi a lot of credit for including USB-C on its midrange headphones.

The body of the earbuds are made entirely of plastic without a silicone tip. That means two things, you’re not going to get a seal to help isolate your ears from outside noises, and they are unlikely to make your ears sore during long listening sessions.

While the stems on the TicPods 2 mimic the AirPods design, they also serve a purpose by being touch-sensitive. This is where you will be able to manage calls, adjust the volume, and control music playback.

When it comes to headphones, comfort is often king, and due to the TicPods 2’s style, they are extremely comfortable to wear. Without a silicone tip, they simply rest inside of your ears, combine that with the lightweight design, and you’ll be able to wear these for hours with ease. In day to day use, the TicPods 2 were a joy to use. They sound good and provide some smart features, such as automatically pausing music when an earbud has been removed. Mobvoi was also clever enough to make the gestures require a double-tap, instead of a single-tap, which prevents you from accidentally activating them when handling the buds.

For all the TicPods 2 do right, I did encounter two minor issues. The first being, that when opening the Mobvoi app it causes the music to cut out for a moment. The second is a personal complaint I have about adjusting the volume. There seems to be a huge jump between the third and fourth steps, where music goes from being barely audible to entirely too loud. I wish there were a couple more steps in between for a finer adjustment when controlling the volume.

If you care about music quality, the first thing you should do is download the Mobvoi app from the Play Store. Then, make sure you’re running the latest firmware. Next, you’ll want to enable aptX in the settings, which provides higher quality sound, and finally, adjust the equalizer.

The Mobvoi app doesn’t give you extensive controls over the equalizer settings, but it does give you several presets to choose from. In my experience, anything was better than the default, so make sure you find one that suits your tastes.

Besides improving the audio quality, the Mobvoi app offers other features that make it worth getting. One of the most useful is the ability to check the battery level of each bud along with the amount of charge left in the case. That’s very helpful for knowing when you’ll need to charge up next.

Unfortunately, I was only able to view the battery level of the case from a pop-up when first opening the app. It would have been much more convenient if there was a way to view it on demand.

Along with the battery levels and equalizer settings, there are also options to change the actions when using the touch-sensitive stems on the earbuds. The bad news is, the actions are quite limited and so are the gestures. Essentially, you are restricted to a single action controlled by double-tapping on either bud.

I would have preferred assigning an action to each individual bud. For example, being able to double-tap the right bud to skip forward and the left bud to go to the previous track.

However, I did find the sliding gesture to adjust the volume to be rather ingenious. The tickle gesture, as it is referred to, works well, and provides an easy way to adjust the volume without any physical buttons. Finally, there is also an option to long press to bring up either Google Assistant or Alexa.

One last trick the Mobvoi app has up its sleeves is the ability to translate between several languages. It’s not exactly the real-time translation you can expect from the Pixel Buds, but it is a nice feature to have quick access to when you need it. Hopefully, you won’t need it too often though, because in my experience, it failed more often than it worked.

Unfortunately, over half the time I was met with an error about my Wi-Fi connection, despite none of my devices having any issues on my network.

As I mentioned above, sound quality can be improved on the TicPods 2 by enabling aptX in the settings and choosing one of the provided equalizer presets. Once you’ve set the TicPods 2 up to your liking, the sound quality is pretty impressive for a pair of headphones without silicone tips for isolation.

There is plenty of volume, and the highs help with instrument separation and vocal clarity. The biggest downside is that without isolation, the bass is never going to be as deep as headphones with silicone tips. Don’t get me wrong, there is still a low-end present on the TicPods 2, but if you’re someone who enjoys your bass, then you’ll probably come away disappointed.

Mobvoi rates the TicPods 2 for four hours of continuous playback and up to 23 hours overall when using the charging case. I was surprised to find they lived up to these claims, mostly because of how lightweight the buds and case are in comparison to other true wireless headphones I’ve used.

Rest assured, even though these are so light you can forget you even have them in your pocket, they still have plenty of battery life to get you through the day. When it comes to true wireless headphones these days, there is an abundance of choice out there. If you prefer a pair that rests in your ears, then Mobvoi’s TicPods 2 are a compelling choice. For only $100 you’ll get up to 24-hours of combined battery life in one of the most compact and lightest packages around, along with good sound quality.

The Mobvoi app also sweetens the deal by adding some additional features, and the gesture controls are convenient while being intuitive to use. If you’re looking for even more smart features, take a look at the TicPods 2 Pro, which include head gestures controls as well as hands-free voice assistant activation.