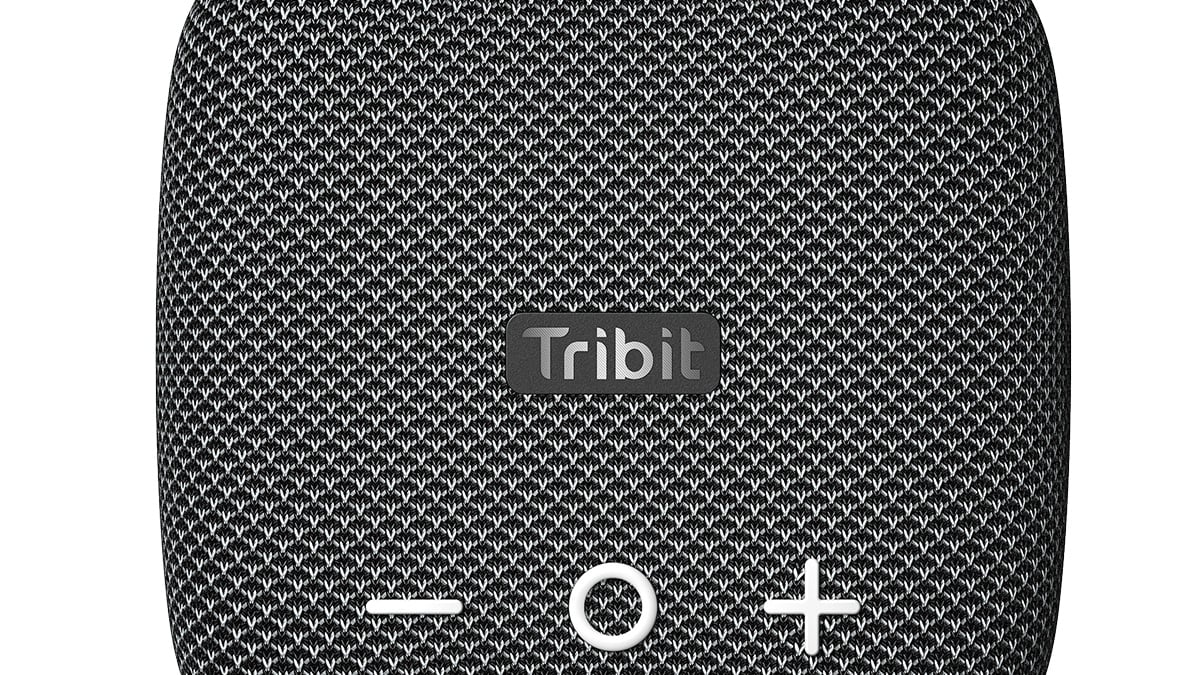 When it comes to personal gadgets there’s a general truism of “you get what you pay for.” And in the area of Bluetooth speakers, we tend to find “bigger is better” often applies, too. But every so often we have to toss those sort of concepts aside.

The Tribit Stormbox Micro 2, which we’ve recently checked out, is one of those instances where you get much more than you’d expect. It punches above its weight in a number of ways.

Measuring around four inches on each side, its a square of a puck with rounded edges. Somewhat pocketable, it fits in a bag over larger pocket without issue.

The black mesh covering is unassuming and maybe a little generic, but that’s not the main reason we buy speakers. We care more about the sound, right? We’ll get to that in a moment.

There are three buttons on the top for playback control and volume with the power and Bluetooth pairing buttons on the front facing edge. The USB Type-C charging port is located on the side. A rubber strap is found underneath which can be used for attaching to a pole, backpack strap, or something else.

Looks take a backseat to audio sound and quality on speakers. And when it comes to the Tribit Stormbox Micro 2, it punches well above its weight class. Not only is it considerably louder than expected, its quality keeps pace, too.

I’ve spent plenty of time with much pricier speakers, some of which are double the size, that don’t fare as well. It puts out a sound that easily fills a room on its own.

Because of its portability and rubber strap it is the type of speaker that I could see myself attaching to a bike frame or canopy pole. I doubt I would have to turn the volume up 1/4 of the way if I were toting it with me on a shoulder sling or taking it with me on a ride.

The buttons have a nice amount of clickiness and travel when pressing them. Whether pairing to a phone or adjusting volume levels, it’s unquestionable that the speaker that the buttons are responding.

The Tribit Stormbox Micro 2 is IP67 rated against water which means it can withstand splashes and rain without issue. There’s no rubber protection boot over cover on the charging port so I would be cautious around pools and lakes, just to be safe. Still, though, I wouldn’t hurry home if I was caught in a spring shower.

On its own the Tribit Stormbox Micro 2 is nice and loud with sound that barely begins to distort at the highest volume levels. But, should that not be enough, you can pick up a second one and pair it for true stereo sound.

Battery life is rated at about 12 hours which is about 50% longer than its predecessor. That’s plenty long enough for a nice hike or afternoon at the beach. But that’s not all the battery does; it also doubles as a charger. Indeed, you can also plug in your phone or accessory into the speaker and use its battery for a top-up.

I’ve found the speaker works in more instances in my life than I expected. It’s the first one I look for when heading out back on the deck for podcasts and playlists. It’s light, easy to pack, and gives me peace of mind knowing I don’t have to worry about a random rain.

There is a lot to like about the Tribit Stormbox Micro 2. It has great portability, water resistance, incredible sound, and a battery that can be used for charging other devices. Oh, and it’s priced to move at just $60.