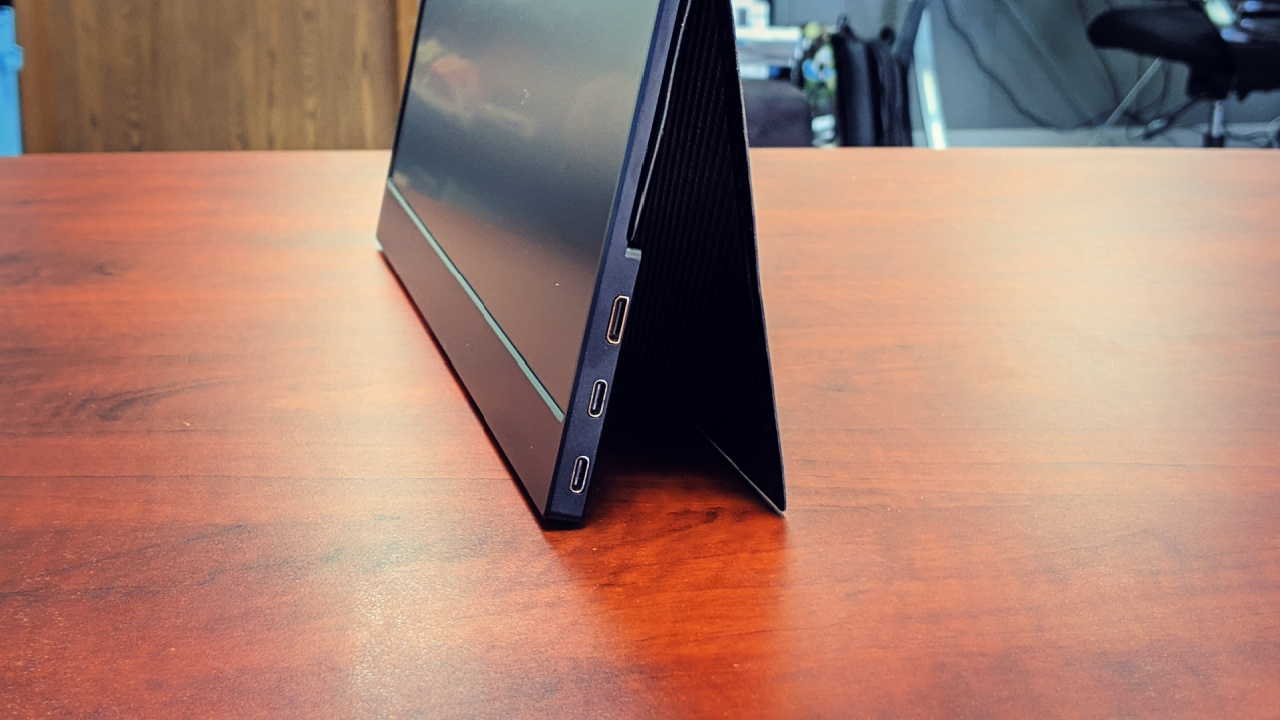 If you’ve ever used multiple screens for your work PC, you know just how beneficial it can be to your productivity. Being able to monitor emails or social media without switching between tabs is really convenient. The same goes for working on a document with source material on a second screen.

While it’s not entirely uncommon to have two screens for the home or office computer, you certainly don’t see that very often with laptops. Nobody has perfected an affordable portable experience with two screens. 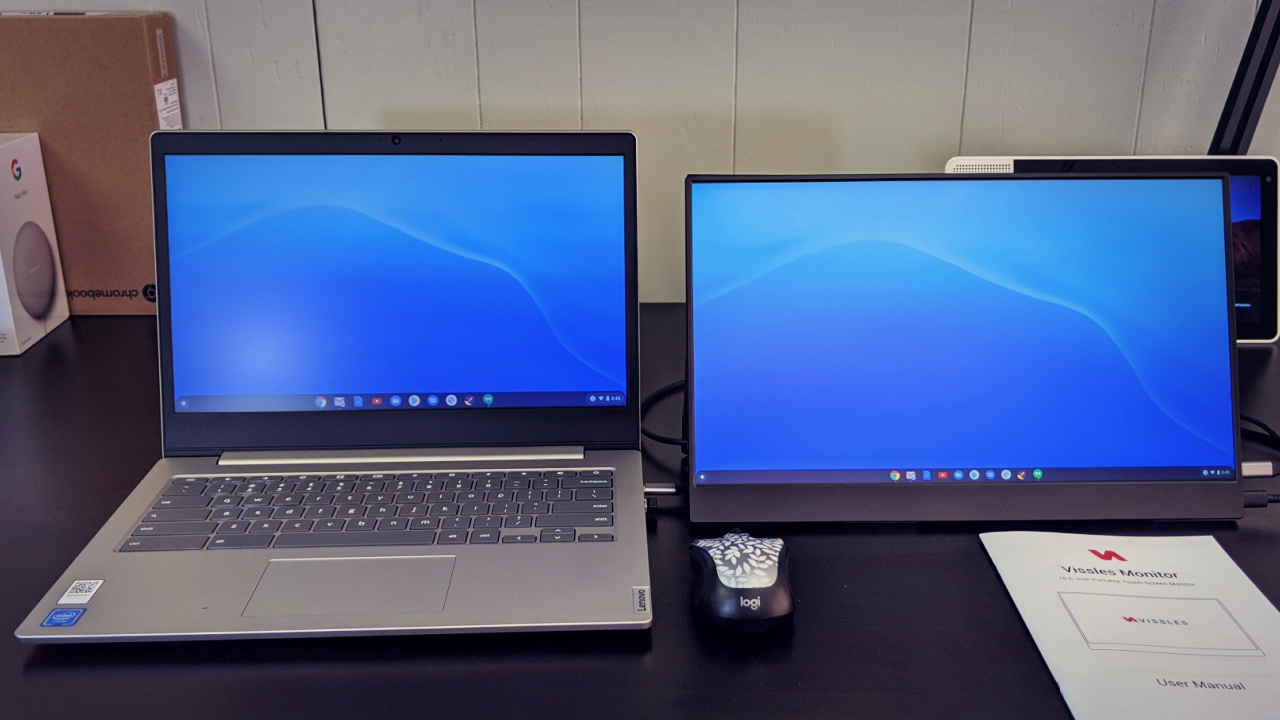 It’s possible, of course, to plug your laptop or Chromebook into a hub/dock or to simply connect to a monitor as needed. That’s nice and all, but the screen takes up space and it’s not something you can take with you on the road.

The Vissles-M ($199), is a portable 15.6-inch display that connects to your computer, laptop, and other devices. It also allows for touch, and that’s pretty damn cool, if not something you get in a traditional monitor. 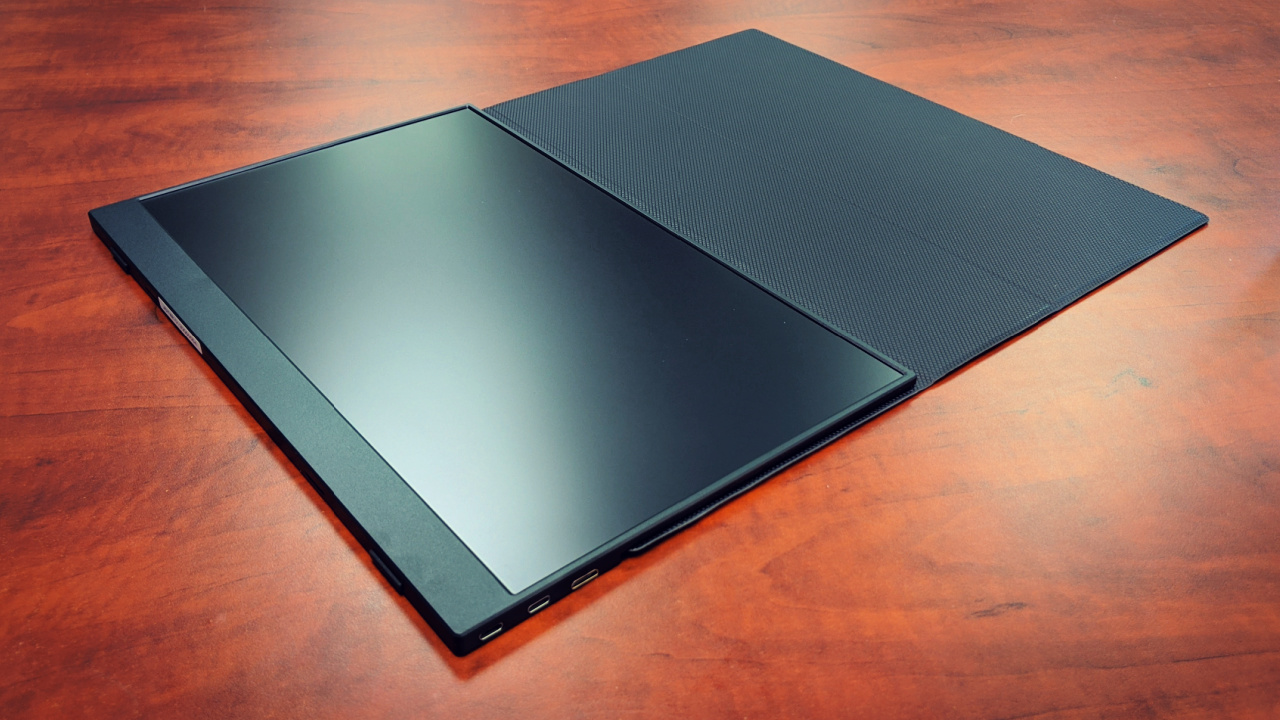 With two USB Type-C ports and one mini-HDMI port, it plugs into your gaming consoles (Xbox, PS4, Nintendo Switch) and Android phones. Indeed, it allows for you to put a screen where you normally wouldn’t, bringing about new levels of productivity or entertainment.

There is also a 3.5mm headphone jack which comes in handy should you find yourself working in a coffee shop; built-in speakers are located at the bottom.

The Vissles-M is an IPS panel with a non-glare surface and a contrast ratio of 800:1. Its resolution is 1920 x 1080, which should be on par with your standard laptop screen.

Included in the box are a number of cables, which we certainly appreciate. It’s nice not having to hunt down a USB-C-to-USB-C cable or a mini-HDMI cable just to get going. 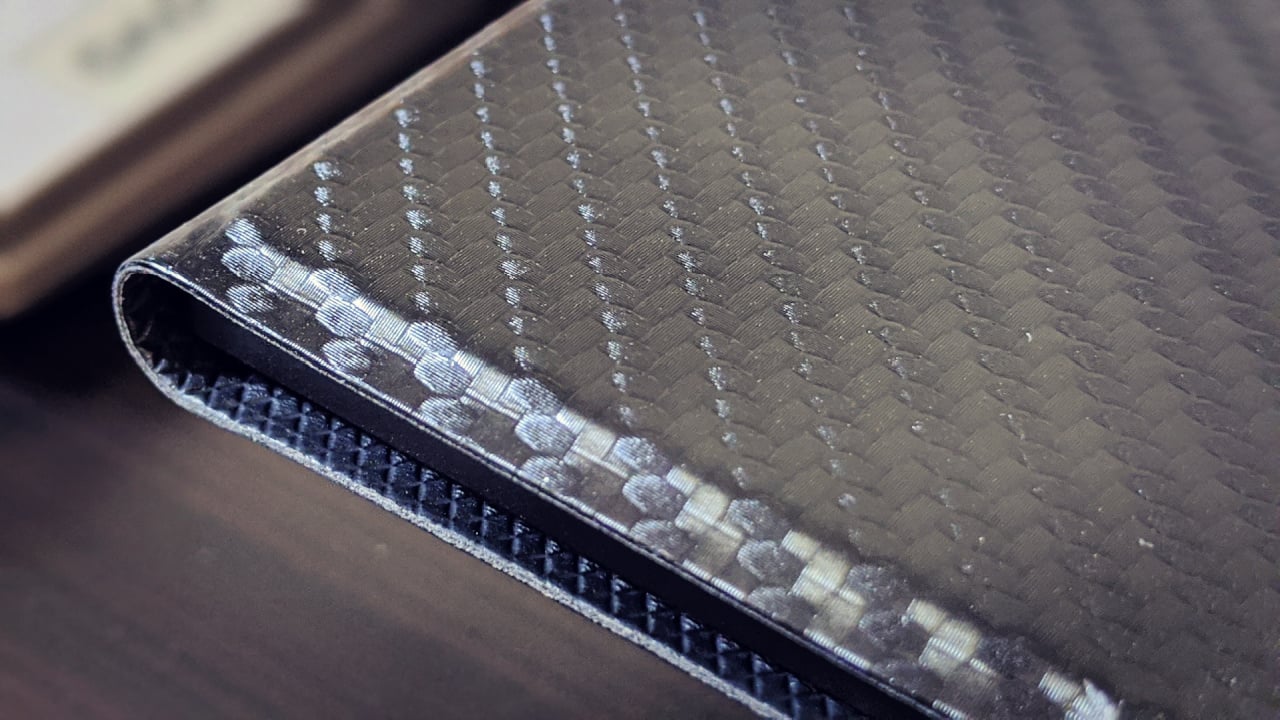 The display has a magnetic protective cover that keeps the screen from getting scratches. It’s also this cover that becomes the stand to prop it up. We found it does well with varying angles for different viewing perspectives.

The whole thing weighs in about 1.5-pounds so it travels very well. And because it’s ultra-thin, you can put it in the same bag as your laptop without notice.

We’d be remiss if we didn’t talk about the overall picture, it is a monitor after all. Brightness is contrast is good, but you’ll want to plug into a power source if you can.

We didn’t get above 65 percent before our unit wanted to power off. Plugging in a second USB-C cable into the wall let us get all the way up to 100. With that said, we do appreciate when we’re able to adjust the image based on environmental or situational needs. 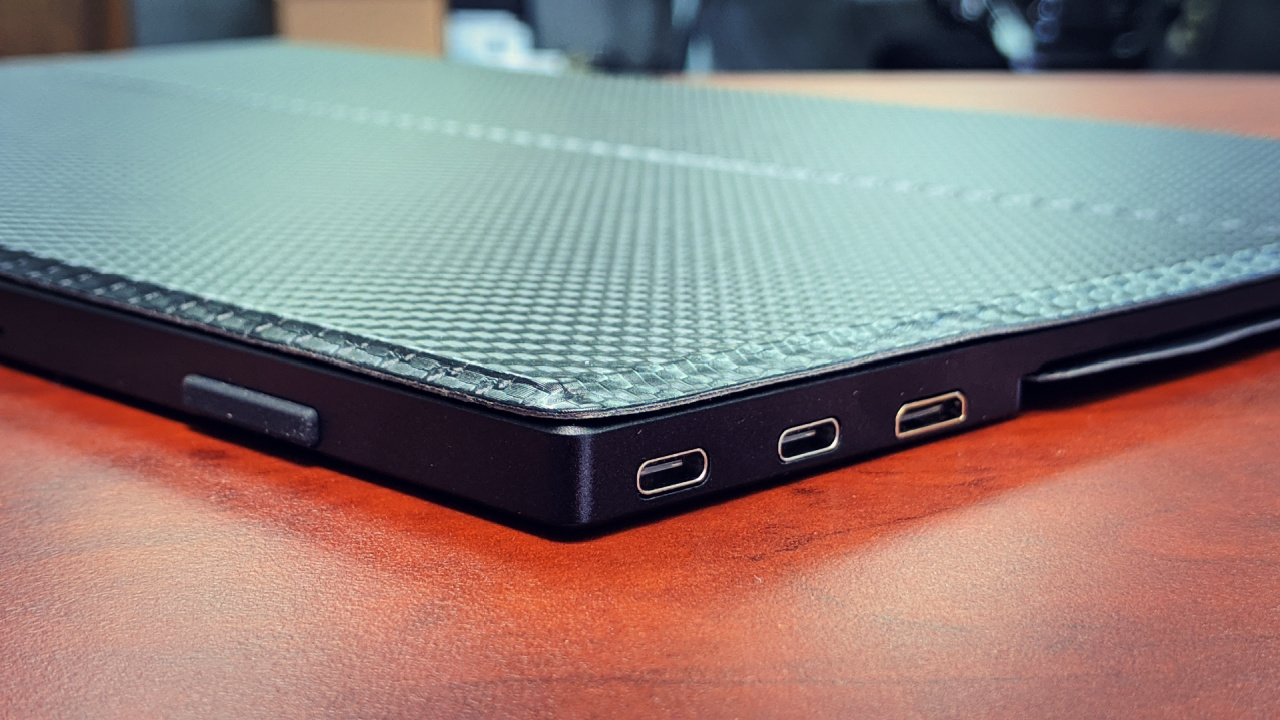 The picture is clear and has a nice contrast, and we found it has good viewing angles. There’s something in the non-glare coating that gives it a bit of a dull or flat effect. It’s not terrible, and really only makes itself obvious when contrasting to your laptop or other screens. If you’re using it for watching videos or gaming, you’ll probably be happy with the image.

We paired ours up with an entry-level Chromebook for a few weeks and came away feeling like the image was nearly identical. Stick it with a Pixelbook or something premium, though, and you’ll see the difference.

This isn’t a gaming monitor, to be sure. Don’t buy this for that aspect or you’ll come away less than pleased. The real demographic here is someone who might need to boost productivity from time to time. Whether that means duplicating/sharing their screen, engaging in Slack or Zoom chats while working on a document, or blowing through emails, it works well. 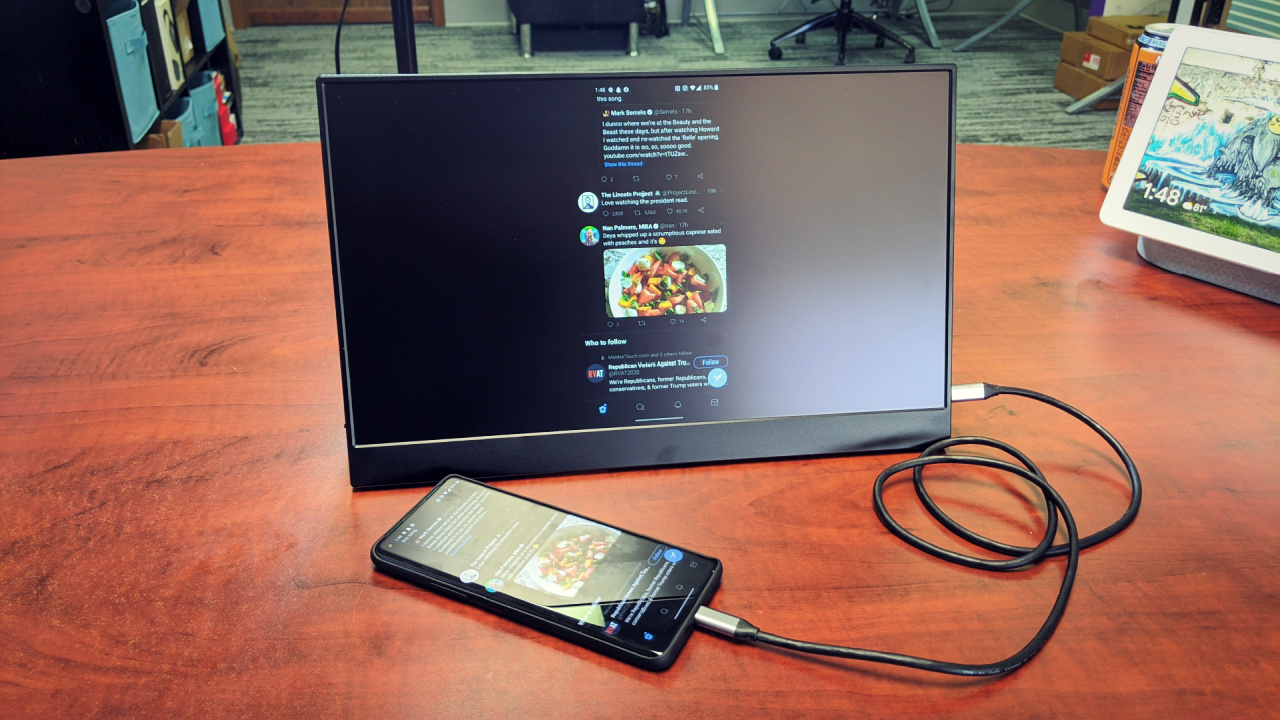 We had mixed results when using our phones as the Vissles-M mirrors your handset but doesn’t allow for touch. It doesn’t fill the screen and the image sits vertically in the middle. The only real use case we can see here might be for sharing your screen with someone else, and even then that’s not great.

We’ve enjoyed having this on the standing desk as it makes working from a laptop more practical and efficient. It largely stays put around the office, but we’ve found it fun to take with us for a little bit of downtime. Getting in some Paper Mario on the Nintendo Switch is a a unique experience when you can do it tabletop at the park or on the back deck.

Learn more about the Vissles-M at the Vissles website where it’s also available for purchase. Pick yours up for about $200 right now.