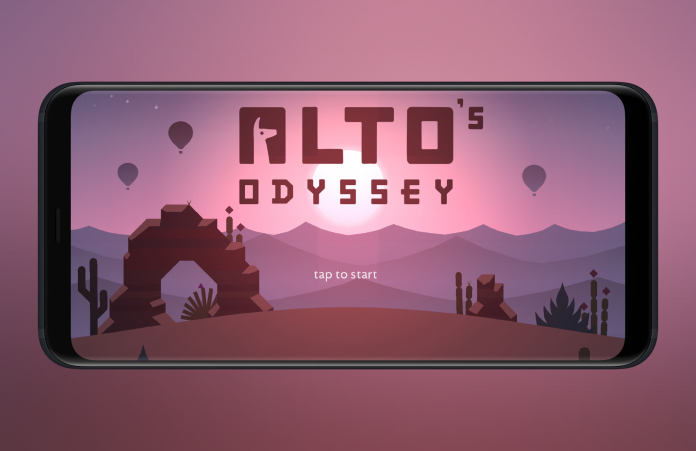 I am not really a fan of the endless genre. For me, they are all designed in a way that spending on microtransactions is the main goal of it, rather than having entertaining gameplay with great design. That’s why when I approached Alto’s Odyssey, I was a bit skeptical. Fortunately, all of my fears weren’t realized, and I ended up enjoying this game much more than I imagined, and I couldn’t put it down for a while.

While the franchise has been around since 2015 (you might have heard about Alto’s Adventure), Alto’s Odyssey was just launched in July for Android devices. Its premise is pretty simple: you control Alto, a sandboarder with superb stamina, across a beautiful, atmospheric desert. There are several structures in the world that you can grind on, such as ropes, balloons (like the one Team Rocket had, just not Meowth-shaped), and more.

Acceleration is done for you automatically, but you can make your character jump by tapping on the screen. Holding it will let you flip your character in order to make backflips. If you do something wrong, like hitting a rock, falling off a cliff, or landing a flip in the wrong way, Alto will not be able to sandboard anymore, which means game over for you. 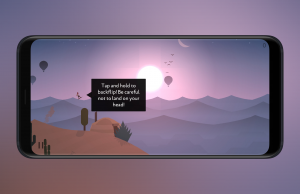 In order to familiarize yourself with the controls, Alto’s Odyssey offers a nice tutorial. Apart from the basic controls, it also explains stuff like jumps, backflips, and coins. In case you die on the tutorial, Alto will just revive and you will be able to try again. Later in the game, when you get a nicer sandboard, you will get a tutorial again for learning about tricks on walls. It is all pretty easy, although there is no mention of items you can collect throughout the game apart from coins, which are a common thing in games anyways.

In case you have missed it before, Alto’s Odyssey is an endless runner. This means that the game ends when you die. Not before, not after. Recognizing that this kind of game can get boring very fast, Noodlecake Studios has added a vast amount of different components to keep you entertained.

At the most basic level, you have items that you collect during your trips to the desert. These include super coins (a coin that gives you more coins), pots (which normally house even more coins), magnets (which attract nearby coins to you), and flowers (which let you smash rocks). Although nice to have, these don’t have any meaningful impact on the gameplay and, on their own, provide almost no value.

Also, there is the currency component. It is fairly common for games to have some sort of currency that you collect in order to buy enhancements, new items, or progress in some sort of way. Alto’s Odyssey lets you collect coins that are scattered through the world. You can exchange for a handful of items, but they are not essential. This means that they do not hinder your progress, as we have seen in an increasing amount of games in the Play Store. 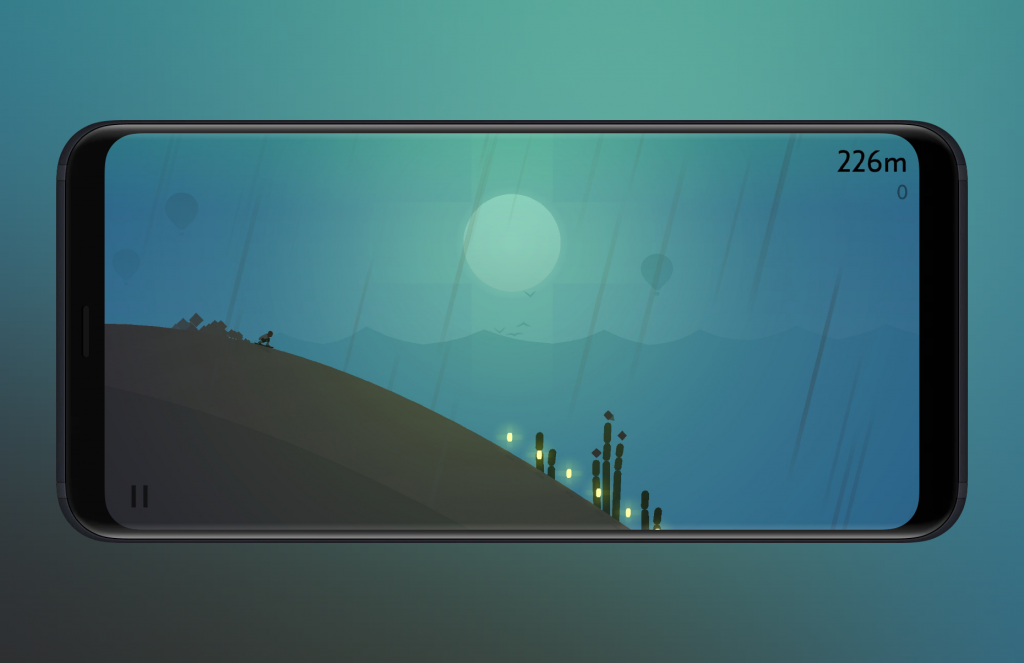 There are upgrades that let you prolong the effects of magnets and flowers, but you can also buy a radio (which, once bought, gives you “something useful” when you encounter it while sandboarding), a compass (to travel to other biomes), and a wingsuit (to do additional tricks). If you feel like coins are hard to come by, then you can also buy a coin doubler with real cash. You can also pay to remove ads, or get coins outright.

As you may have figured, this is not enough to hold a game these days. It may have worked on the days where Temple Run was popular, but we have thankfully grown as a mobile gamer generation. Alto’s Odyssey introduces objectives, which, in my opinion, work in a superb way to increase the enjoyment out of the game. You get three at first, and, when you complete them, you get to the next level and get three new objectives, and so on.

These objectives can vary both in the required action, and in their difficulty. For example, some are very easy, such as “collect a super coin.” Others require you do to a double backflip, which is not as easy as it sounds. Some require you to hover over globes, to jump over them, to travel a certain amount of meters, and everything in between. It is very entertaining to complete these objectives, since it brings some kind of purpose apart from the “travel as far as you can” that endless games normally have. 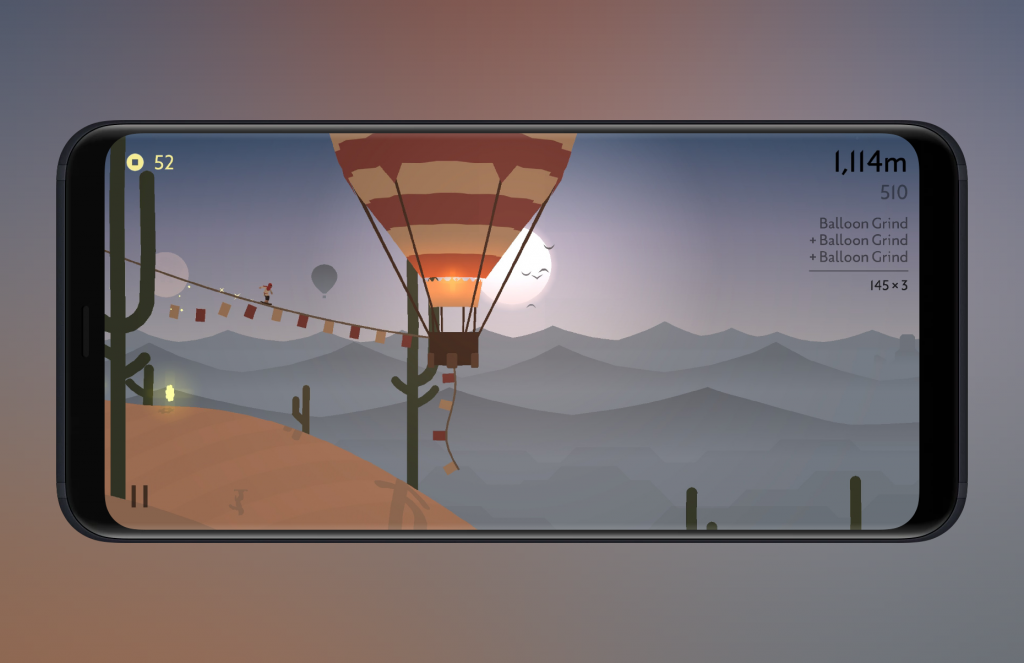 As a plus, getting to a certain number of levels will grant you a new character to choose from. These characters have different strengths or are able to do different things. For example, there is one that travels faster than others, while other can double jump. This is the kind of progression that is so commonly missing from other games, so it’s nice to see Alto’s Odyssey providing it.

There are a total of 180 objectives to complete, which gives you plenty of stuff to complete and increases its replay value significantly. 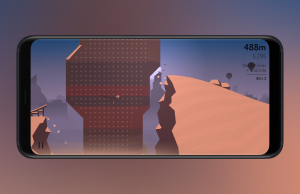 Even though they are referred to as “levels,” the game itself only changes when you reach a new biome. According to the Merriam-Webster dictionary, a biome is “a major ecological community type.” In this game, a biome is kind of that too, because the environment changes a bit from biome to biome. You start on a plain desert that has few stuff in it, but you can go to ruins, canyons, and temples.

While every world is randomly-generated, this variation in the environments that you find makes the game a lot less monotonous. Also, as previously said, when you reach a certain level, you can purchase a snowboard that lets you slide through walls and jump from one wall to the other, which brings a whole new dimension to the game. This makes it less dependent on sandboarding through the desert only, increasing its fun factor.

There’s no way of talking about Alto’s Odyssey without its graphics. This is, by far, the greatest “feature” of the game. They are not striving for realism, but rather for simplicity and creating an atmosphere. There are time variations, so you will play in every condition from dawn until dusk. The background with the rising sun while the foreground has shadows all over is breathtaking, and really does a lot to set an atmosphere of relaxation and calmness.

All special effects are smooth and details, while not prominent, add a lot to the philosophy. Most of the elements in the game are simple without feeling unpolished. For example, in order to identify walls that can be jumped at, the game adds small dots that do not disturb the design style. Balloons have just enough details to figure that it is a balloon, but nothing more. Flags from ropes are just colored squares, but once you board through them, they fall gracefully to the ground. Nothing tries to be realistic, but everything does its best to immerse you into the experience. 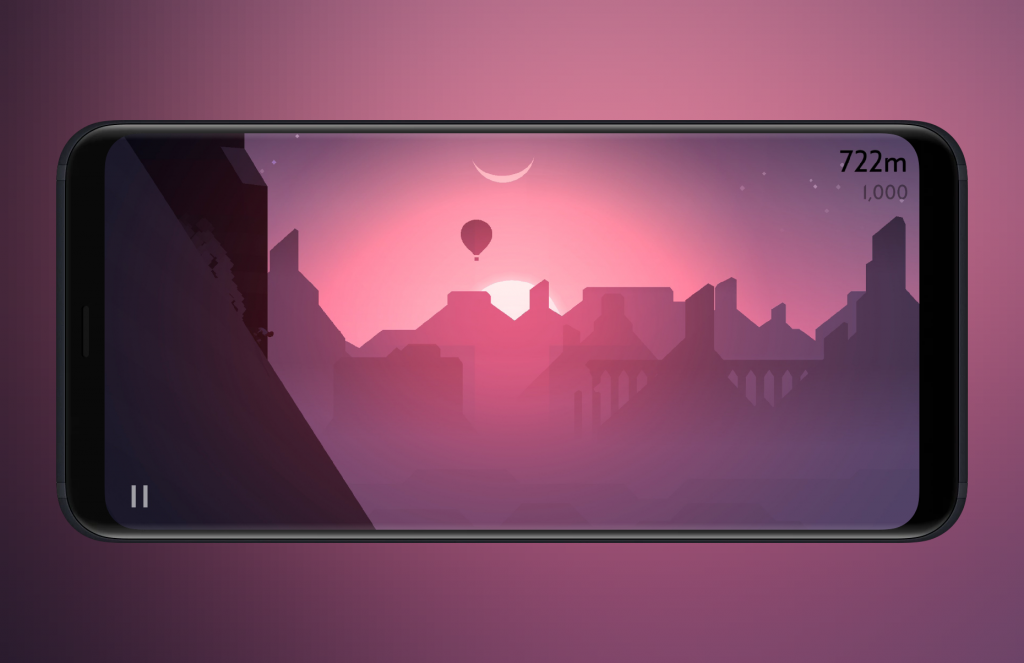 Of course, this could not be done without audio that properly sets the tone. Sound effects and music all work together to complement the atmosphere set by the graphics. Normally, I find that audio in games is just there, either adding just a little bit to the gameplay or not making it worse. This game, however, is one of the few in which the graphics and the sound work together in a superb way towards a common goal.

If all you want is to relax and sandboard without feeling anxious about objectives and unlocking characters, there is a Zen Mode. Here, Alto cannot die, although you can still screw up, but tapping on the screen will fix that. Also, the game recommends you to play with headphones because the music is incredibly relaxing. This mode highlights the work made by the team in order to portray this game as a relaxing, breathtaking adventure.

Alto’s Odyssey gets elements from the endless genre, but slaps a lot of different mechanics on top to make an enjoyable game. Objectives, new characters, and additional mechanics make this game stray away from the usual get-highest-score-possible business. Even if you are not fully convinced by this, the graphics at least are worth a look. Such an atmospheric game, in which the graphics and the sound blend together to create an astonishing experience, is something that is not commonly seen on the Play Store. Give it a go, you might end up as hooked as I was.

Download and install Alto’s Odyssey from the Google Play Store.

Rider: Get ready for some flipping, hard-to-control action (Review)