Clash Royale is a deck-building/tower defense hybrid that pits you against players from all over the world to battle for crowns, trophies and chests.

Clash Royale is very easy to set up. Follow these steps to get yourself into the battle and start earning chests:

I would liken playing Clash Royale to buying lottery scratch-off tickets; once you start, you don’t want to stop. As will be seen later in the review, it’s this very sense of excitement and addiction that supercell ingeniously leverages to get you to spend your real money. 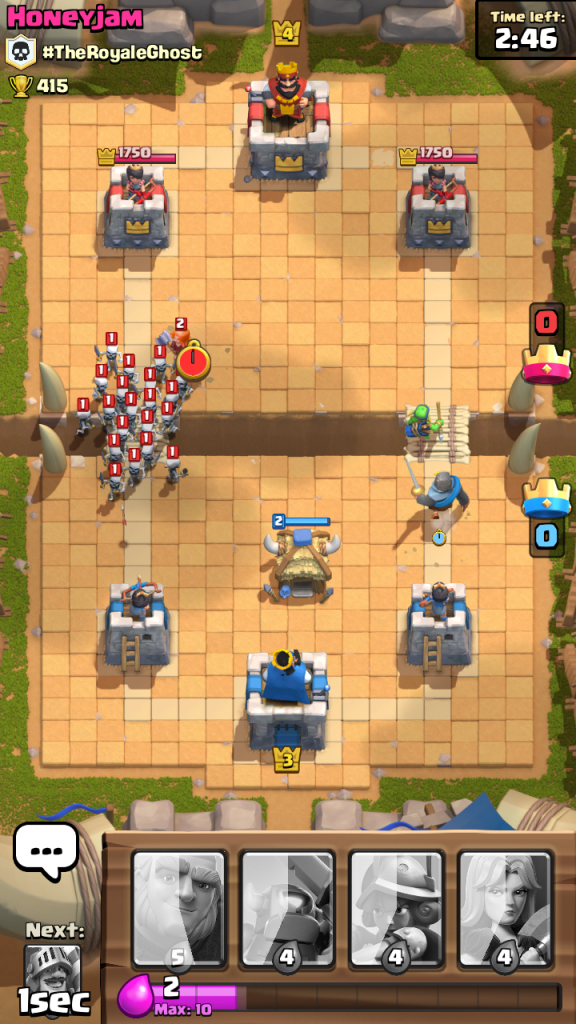 The combat in Clash Royale is not turn-based like most deck-building games, but is instead “real-time.” There are no turns. At the bottom of your screen, below your cards, is your elixir gauge. The battle will begin with you and your opponent having a small amount of elixir. Unlike the casting cost formula in game’s like Hearthstone, where you have to wait until your next turn for more of your casting currency, Clash Royale instead has your elixir gauge gradually refilling throughout the battle.

The cards in your hand have an elixir cost, and the more powerful the card, the more the elixir cost will be. This is where clash Royale begins to deviate from the combat in standard deck-building games.

There are two ways to win a battle in Clash Royale:

You use your cards to summon creatures and spells onto the battlefield. If the opponent has no creatures on the board, your creatures will immediately go after the opponent’s towers. If your opponent does have creatures in play, most of your units will default to attacking your opponent’s creatures rather than going after their towers. There are exceptions to this, like Giant cards. You will also, more than you like, end up having to use your creatures’s for defense rather than offense. This game really requires you to strategize and think about what cards you use, when you use them, where to place them, etc.

At the end of a battle, if you lose, you will receive one crown and lose trophies. Trophies are used to unlock new battle arenas. Crowns can be used to unlock special chests.

If you win a battle, you will be awarded with three crowns and either a silver, gold, or magical chest. Chests are how you unlock new cards, obtain more Gold, and, on occasion, unlock green gems. Chests are also where the game’s In-app purchases come into play.

One of the things that keeps you coming back to Clash Royale is the thrill you experience when opening a chest. The problem is, these chests, which are so essential to success in this game, are going to cost you either your time or your money.

You have four slots that can hold a chest. When you receive a chest, in order to unlock it, you must click the chest and start a countdown timer. This is your pay wall. You can only unlock one chest at a time, and the better the chest, the longer you have to wait to open it. For example: Silver Chests take 3 hours to open, Gold Chests take 8 hours to open, and Magic Chests take 12 hours to open.

If you have all four chest slots filled, you will no longer be able to earn chests in battle, although you can still earn trophies. In order to start earning chests from battles again, you must free up at least one of your chest slots.

There is, of course, one quick way around the pay wall: real money.

Chests can be instantly unlocked using green gems, which act as an in-game currency. Of course, your supply of green gems at the beginning of the game will be quite limited. It will be up to you how you decide to spend your initial supply and whether or not you would like to purchase more.

You will occasionally unlock green gems in a chest, but this does not happen often and you usually get no more than 3 or so. The game also has a Gold system that is used for upgrading and purchasing cards. If you run low on, or run out of Gold, you can obtain more by opening chests or by buying more with green gems. Gold is a valuable commodity in this game and you will find yourself running short of it quite often if you choose not to spend real money for green gems.

Clash Royale looks great! I love its cartoony style and it ran quite well on my mid-range ZTE ZMAX 2. The game sounds as great as it looks. The music is fun and contextually appropriate, and the creature sound effects are often humorous and fit the creatures they belong to quite well. Everything about Clash Royale’s design is top notch.

For the sake of brevity, I have not covered every nook and cranny of Clash Royale. There’s a clan system, card upgrade system, and there’s even a feature similar to Twitch.tv where you can watch recordings of other players’ battles.

Even with its pay walls and in-app purchases, Clash Royale is just plain fun. It’s deep enough to appeal to hardcore players, but also simple enough to appeal to casual players. There’s something here for everyone and because the game is multiplayer-based, the replay value is limitless. Give Clash Royale a try as soon as you can. I have a feeling it’s going to be a contender for 2016’s mobile game of the year.

Want a challenge? Here are seven of the most competitive games on Android

Editor’s Picks: 11 Android apps we think you should try