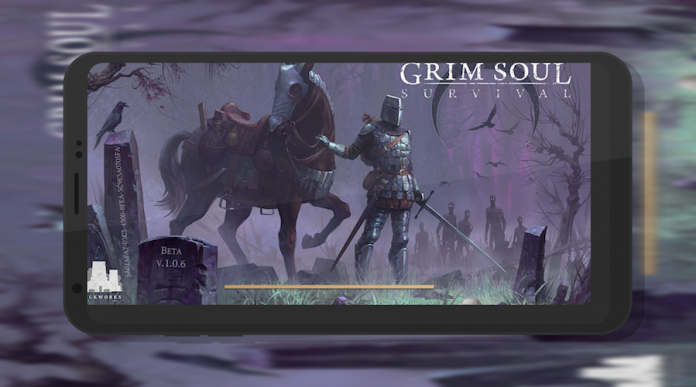 I wanted to like Grim Soul; really I did. It sounded great. The dark, gothic fantasy of Dark Souls mixed with the crafting and survival mechanics of Don’t Starve – what could go wrong? 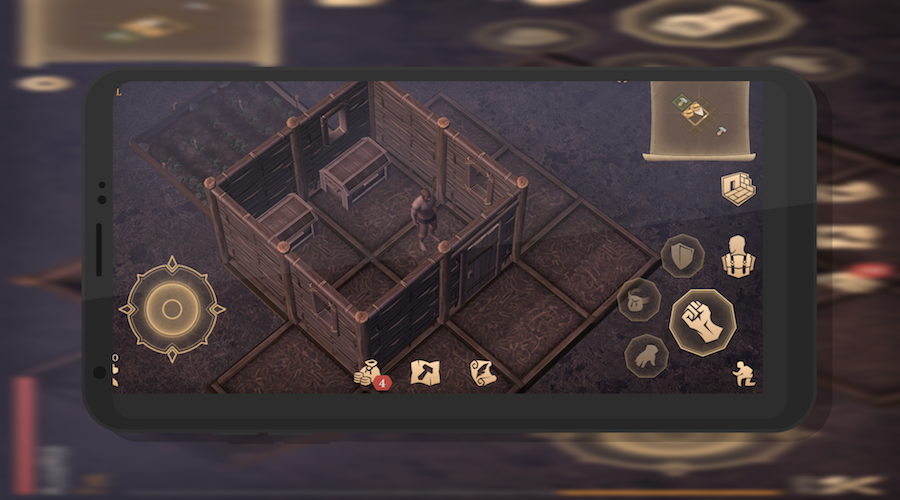 The first thing one does when loading up the game is log in to Play Games – so far, so good. Then you load into a grim, foggy forest next to the corpse of the last unfortunate adventurer that played this game. You get some loot from his body, and then you’re turned loose into the region. This first area is your “Stronghold.” There are a couple minor enemies, as well as wood, stone, and fiber you can loot or harvest. This lets you build tools and a rudimentary shelter – and not much else.

To progress any further into the game you need to explore other areas by running into the mist surrounding your Stronghold. This brings you to a world map, filled with other, randomly generated areas, as well as the Strongholds of rival players. And it’s here that the game falters. As with many mobile games these days, you have an Energy Meter that limits the number of things you can do before you have to wait for the meter to recharge. 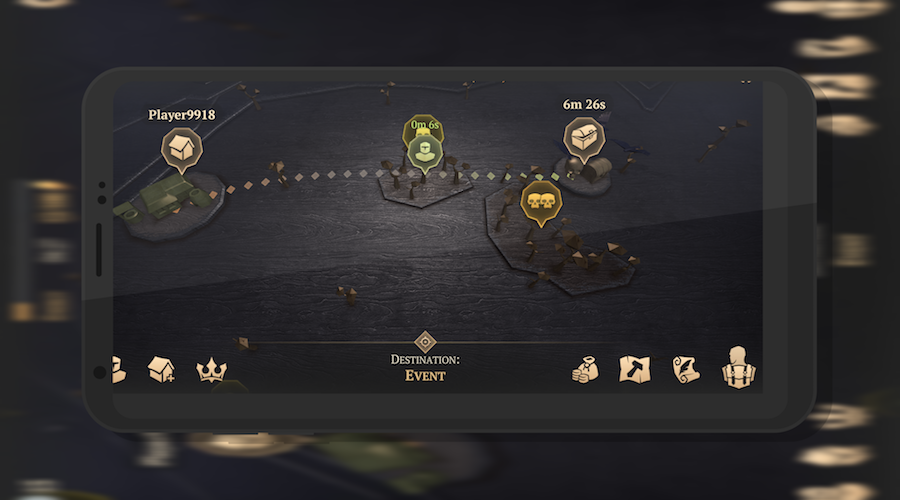 In this case, that meter drains when you travel from one area to another. These areas are populated much like your starting one – enemies, wildlife, and natural materials. So similar, in fact, that it doesn’t feel like you’re doing much of anything. You find a baddie, you swing at him a few times until he dies, and you go back to collecting.

Eventually – after perhaps two or three enemies and a lot of farming – you’ll level up, and gain access to a new research point to craft a new item. But frankly, the amount of time you invest into leveling isn’t worth the payoff of actually getting there. It doesn’t feel fulfilling or gratifying – it’s a grind in the truest sense of the word. 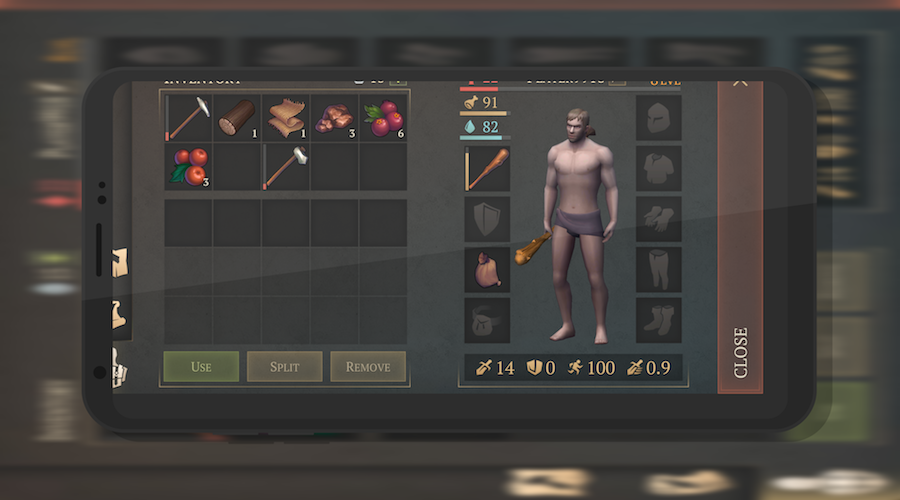 It’s tough to really evaluate the quality of the graphics in this game. It’s too dark, drab and foggy to see much of anything at all. The weapons, armor, and enemies in the game are distinctly reminiscent of the Dark Souls games. It can be a little tough to distinguish between enemy types at times, especially between the standard Leper enemies and the faster, more dangerous Damned.

The color palette is painfully drab. All grays, browns, and blacks, with barely any color to speak of. While clearly inspired by Dark Souls, that franchise knows when to inject brilliant moments of beauty into its games to break up the utter hopelessness of the environment. Grim Soul, however, does not. Every part of the game is as gray and wretched as the next. 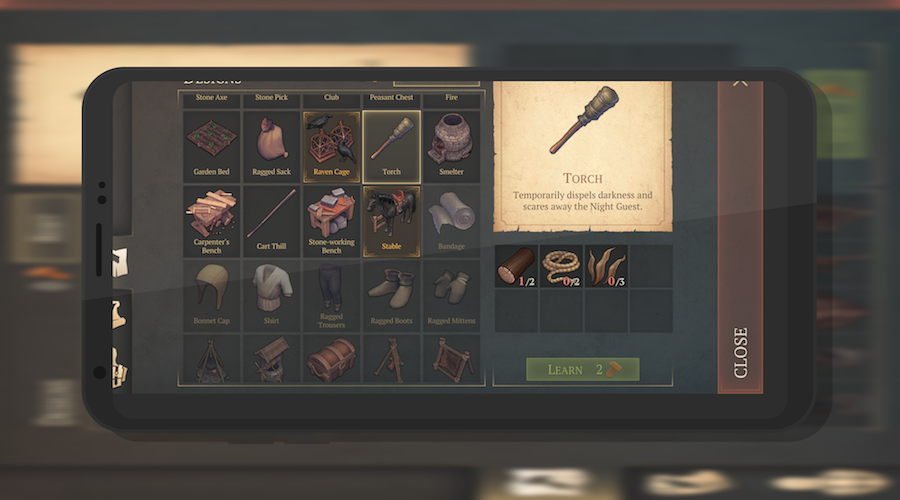 Grim Soul teases you with the future – you can see your entire skill tree at any time. It teases you with the prospect of riding a horse, of building a castle, of sailing to another land. But the time investment required to attain these things is prohibitive, at best. It took me hours upon hours just to reach level 7. To build that ship to sail across the seas? Level 75.

Time waste and intentional grind aside, the game plays pretty well. The crafting is decently balanced, with challenging but attainable requirements to craft each item. As is typical with survival games, there’s very little tutorial or guidance. But this one seems a little more casual and lenient than most, presenting you with plentiful resources in your starting region and marginal threats. 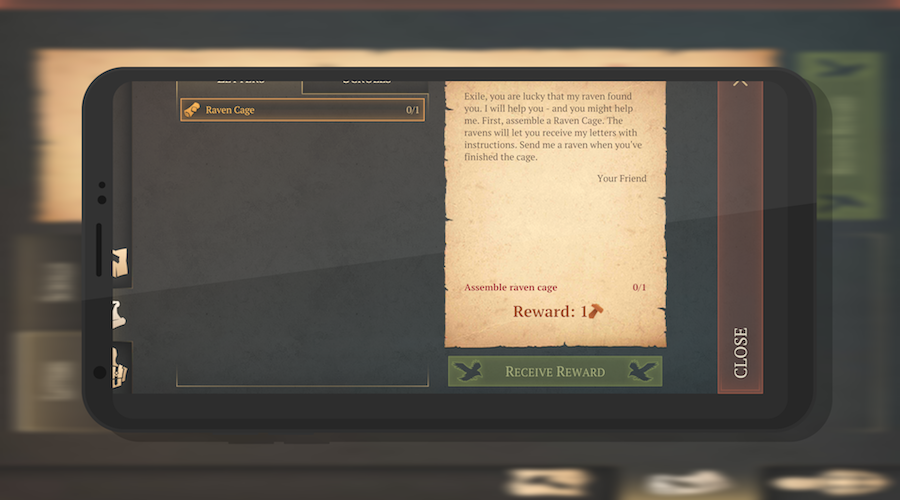 One problem you’ll run into right off the bat, though – inventory space. There’s not enough of it, and it looks like a bigger bag is hidden behind an IAP. You can craft one pretty early on – it provides you a whopping six more slots. It’s rough. When you die – and you will, often – you drop everything you were carrying, and it’s lost forever. So when you go to explore, it’s best done with an empty bag, everything else safely stored in a chest in your Stronghold.

Combat is a bit of a slog. There’s one attack button, no special abilities to speak of, and only rudimentary sneaking mechanics. As such, it seems like the game has a bit of an identity problem. Does it want to be an action game? A survival game? A stronghold-building game? An exploration game? It does a little bit of all these things, but none of them particularly well.

Honestly, I got bored of Grim Soul after my first couple sessions. You can’t level up in the amount of energy you’re given, even at low levels, and there aren’t enough crafting options to make that grind worthwhile. This is a simple case of a game with potential, ruined by IAPs and bad economy/tuning.

Not even Kate Upton’s ‘talent’ can keep Game of War from being a hot mess! [Review]