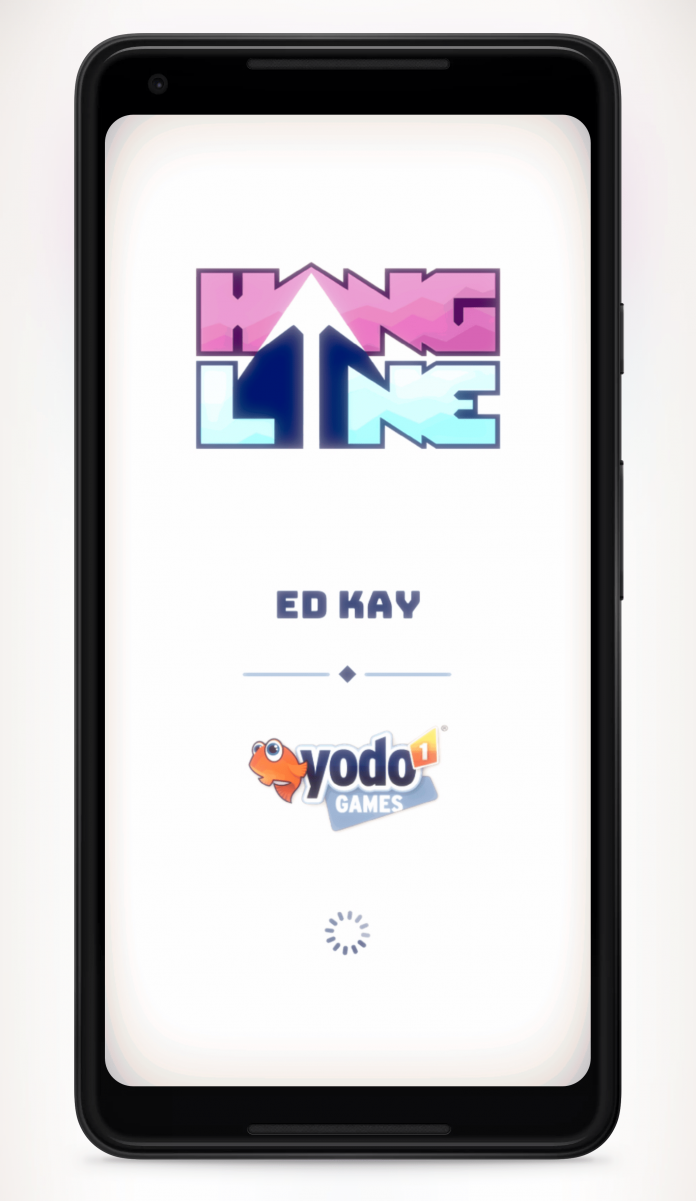 I am pretty sure none of you have wondered what would be the result of combining Spiderman and the Fist of the First Men on a single game. However, developer Yodo1 Games has created a game on that exact setting, called Hang Line: Mountain Climber.

In Hang Line, you control a mountain climber. The Hang Line world is full of tragedies, and it is your job to bring the victims back to safety. In order to do so, you need to traverse perilous mountains and find survivors or other objects that were lost on whatever wreck happened.

If your grappling hook fails to connect with a solid part of the mountain, or you hit rocks too hard, it’s game over for you.

The game starts with a really small tutorial about the mechanics. In order to grapple to the mountain, you need to tap on the screen, and your character will detach from its current spot to go to your desired destination.

Along the way, you will find survivors of the various wrecks that happen in this world. You just need to pass close enough to them, and a helicopter will throw them a rope and rescue them. Some levels ask you to retrieve objects instead, but the idea is the same. Each level has a goal of rescuing three people or getting three objects. 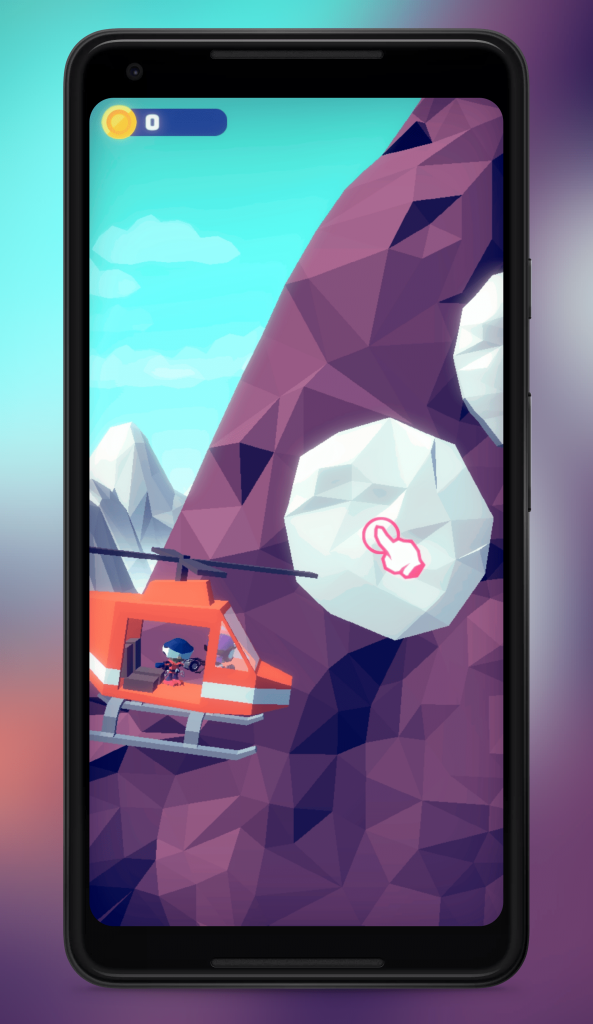 However, your true goal is to reach the mountain’s summit. In order to do so, you just need to attach your grappling hook to the flag pole there, and the helicopter will catch you and take you to your next adventure. This flag mechanic, plus the animations that happen afterwards, reminds me a little bit of finishing a level in Super Mario Bros.

The first levels are easy enough, since basically nothing can kill you. However, as you progress, the difficulty starts to ramp up, and snowfalls, animals, and rocks come at you in an attempt to kill you.

Some ice platforms will crack when you grapple on them, giving you seconds before they disintegrate. Some rocks will move directly towards you upon hooking, which means you need to evade them quickly or die crushed. 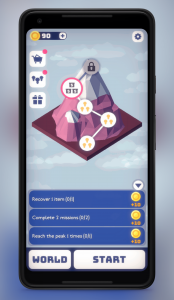 There are some levels that ask you to climb a certain distance without dying. These are insanely fun, since you don’t need to focus on reaching the top and save people, but rather survive whatever the game throws at you, having to make split-second decisions. Although it is frustrating to die, these levels are definitely the highlight of the game.

As a side note, one of the stages, Air Force Gone, features a missing football team (the real football, not American football) in the middle of the mountains after a plane crash.

If you are a football fan, then you probably know about Chapecoense’s tragic crash in 2016, in which almost all of the team members died while travelling to Colombia for the Copa Sudamericana’s final. The stage even features an image of an injured player with a football on top of his head. I don’t know how ethical it is to use a real event as tragic as that one as a stage for a game. Then again, there are many, many WW2 games around.

At the beginning of each level, you can select gadgets to aid you in your journey. The most basic one is a radar. With this equipped, you will see on the corners of the screen where is the closest survivor (or item). Sometimes, the location of survivors is not so obvious, so the radar comes in handy.

Other items include a thruster, which activates when you fail to grapple to the mountain; a repulsor, which deflects incoming threats; and a grip hook, which avoids your line detaching from the mountain when hit by a threat.

Except for a radar given to you at the beginning of the game, all items have to be purchased. Six of each can be had for around $1. If you don’t want to spend money, then the game is totally playable without them — it’s just a bit harder. As a bonus, any purchases made will remove ads, so keep that in mind. 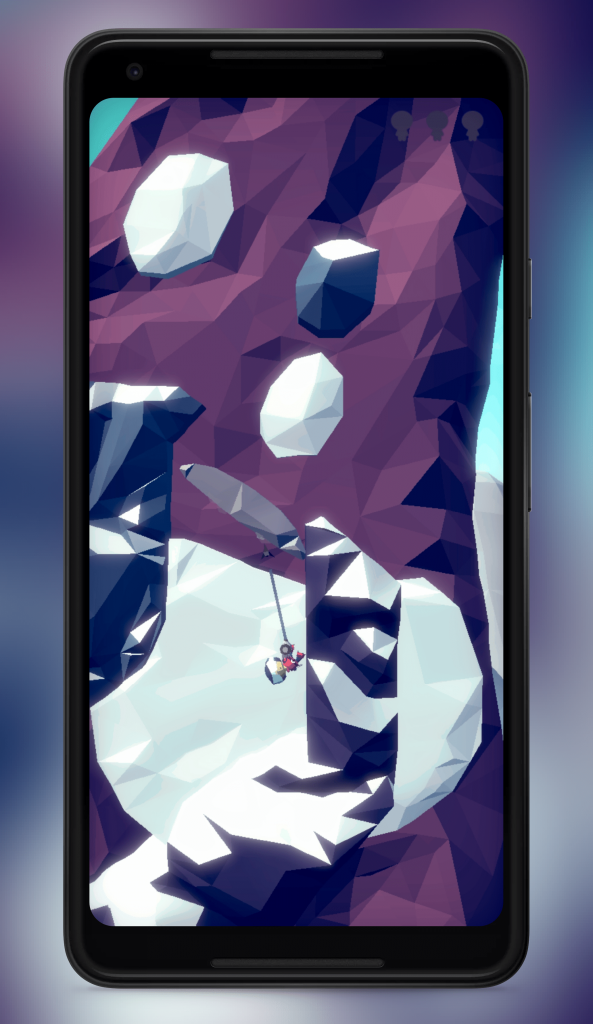 Apart from the gadgets, the game also features several cosmetic upgrades, such as the ability to change the helicopter that takes you to each level. These can be bought with coins, which is the in-game currency, and which you can get either by playing the game or by buying them with money. As far as I know, these do not affect the game in any way, so they are just there for collection purposes.

The game also lets you use a different character. At first, you start with either a man or a woman, but there is at least one more unlockable player. These also do not change in any way the game’s mechanics. 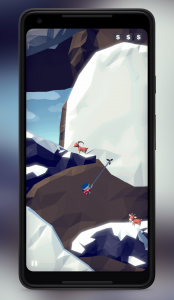 The graphic design in Hang Line is very colorful and jolly. While not highly detailed, you know exactly what is going on. Snow and ice shards fall in style, and the character animation is fluid. All graphical elements converge to create a nice environment with a lot of interaction among all of its parts. Just watch the video at the top to see how the game is extremely fluid in its animations.

Sound is also on-point. The sound effects are great, from moving objects to the helicopter. Sometimes, there are some small issues, though. For example, I rescued an old guy once and he did a very juvenile, non-elderly noise when being grabbed by the helicopter. Nevertheless, overall, the audiovisual department is satisfactory.

Hang Line: Mountain Climber provides very fun mechanics, easy to understand controls, and gorgeous visuals. Updates are very frequent, since it is a pretty new game, so more content is being added and bugs are being fixed every few days. Some people will dislike the fact that gadgets are locked behind in-app purchases, but the game is polished enough that it merits throwing money at the developers for their hard work. Give it a go!