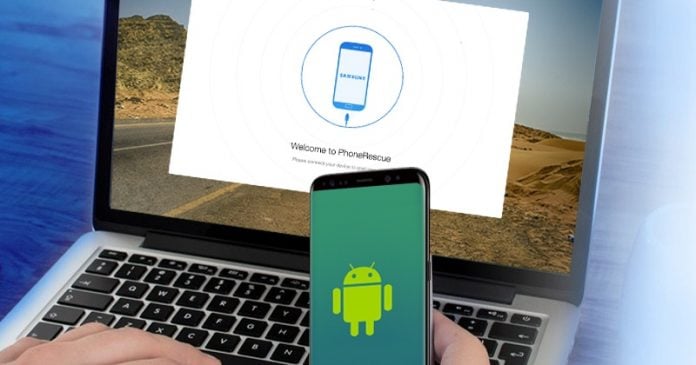 Have you ever deleted a photo or a file from your phone only to realize a couple seconds later that you made a terrible mistake? I for one, found myself in this very situation multiple times, inadvertently wiping out stuff because I was distracted and not fully paying attention. 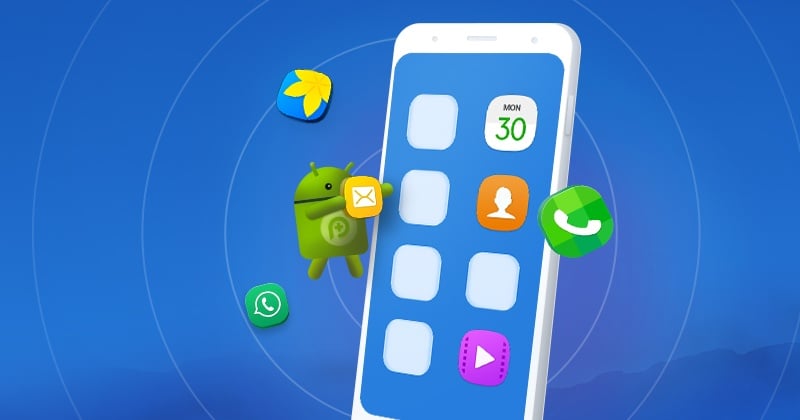 Luckily, there’s a tool we can employ to bring our lost files back to us. It’s called PhoneRescue and is free to download on your Mac or Windows computer.

For starters, let me note one thing. You won’t be downloading PhoneRescue from the Google Play Store, nor will you be installing it manually on your Android handset. Instead, you’ll need to visit PhoneRescue’s official web page and download the (free) Windows or Mac version.

That’s right, you’ll first need to get PhoneRescue on your computer.

There are a few steps you need to follow before actually getting to the recovery part. For starters, the app will serve up a list of “Quick Tips” or instructions which ideally need to be taken into consideration before you start the process of recovery. 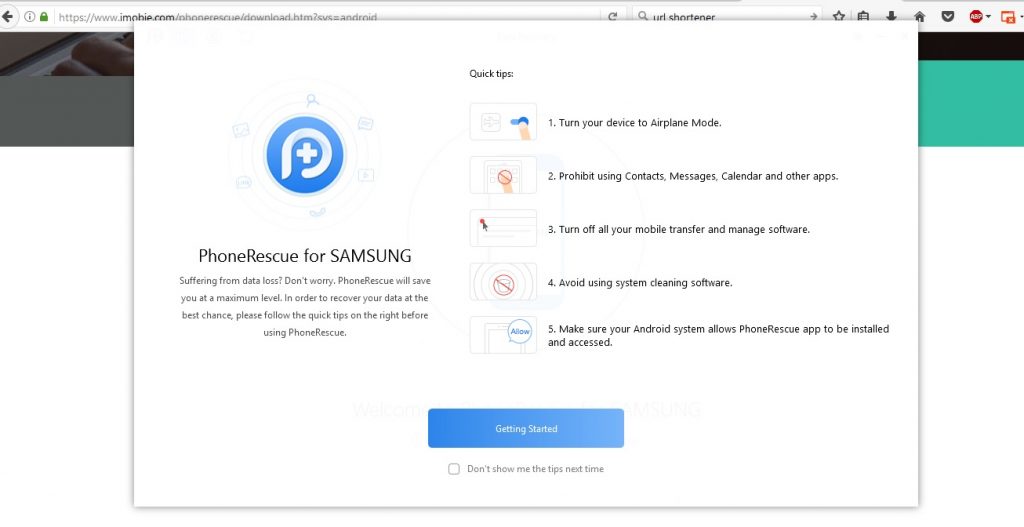 You’ll be asked to do things like “Turn your device to Airplane Mode” or “Prohibit using Contacts, Messages, Calendar and other apps.”

Next, you’ll have to connect your phone via a USB cable to your computer. But not just any phone. For the time being, PhoneRescue supports devices from manufacturers like Samsung, Sony, HTC, Google, and Huawei. Support for Motorola, LG, and OnePlus is said to be coming soon.

UPDATE: as of the publication of this post both Motorola and LG are now supported by PhoneRescue

PhoneRescue says its customized technologies based on each specific phone or tablet model can deliver a high data recovery success rate and speed. 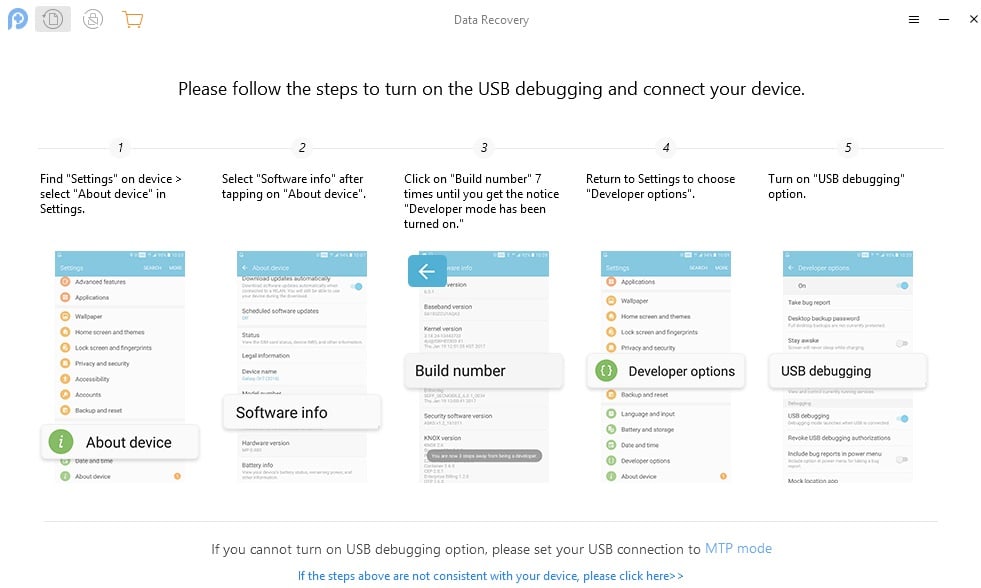 After connecting the phone, you need to enable USB Debugging on your respective device. I was working with a Samsung phone which has Developer mode enabled already, so it only took a few taps to turn USB Debugging on. 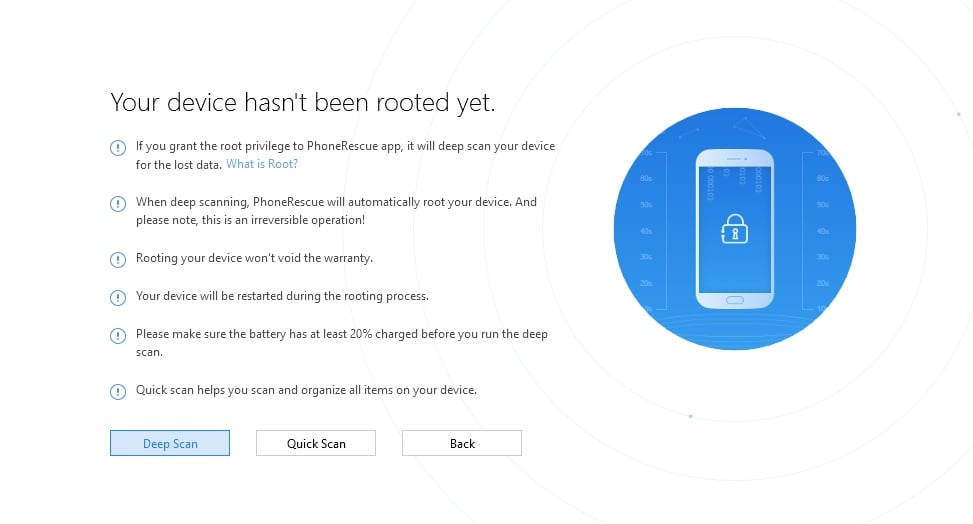 The following step is to choose which Scan you wish to perform. You’re given a choice between a Deep Scan and a Quick Scan. Note that if you opt for the former, you’ll need to have a rooted device.

I didn’t have mine rooted, but luckily PhoneRescue offers a built-in tool which does all the heavy work on your behalf. So it wasn’t long before my device got rooting privileges and I was able to proceed to the Deep Scan part of our story. 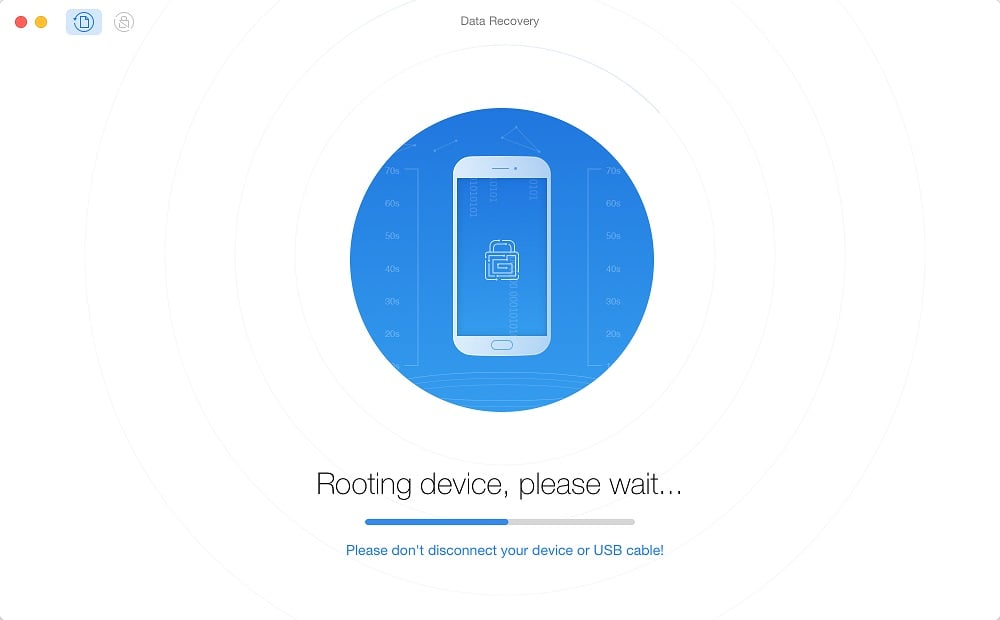 But PhoneRescue can perform a Quick Scan even though the Android device might not be rooted. 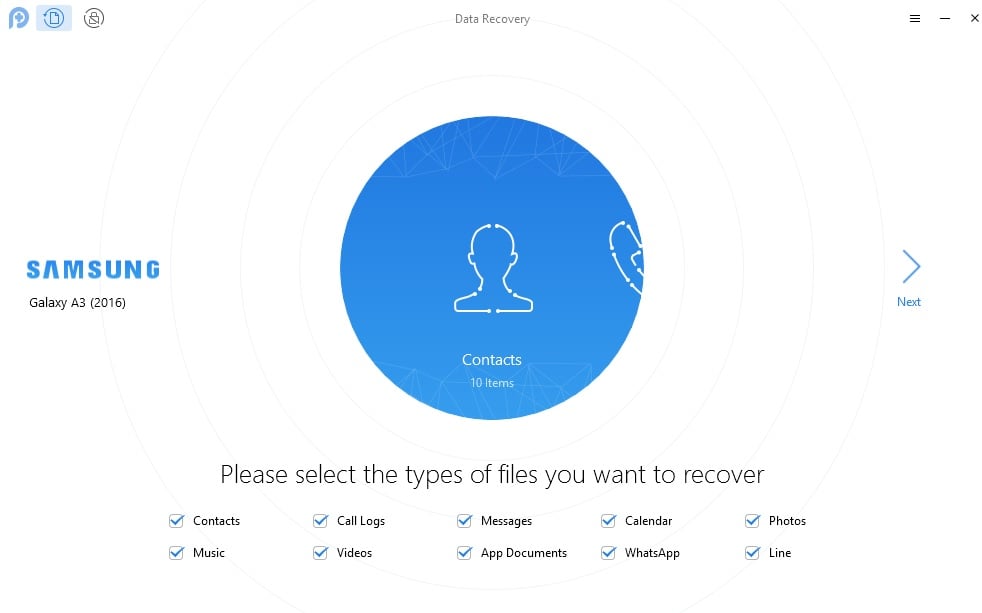 Once you choose what kind of scan you want to perform, PhoneRescue asks you to select the types of files you want to recover including Contacts, Call Logs, Photos, Music, Videos, Apps, Document, Messages, WhatsApp, etc. Click Next and wait a few minutes to see what PhoneRescue comes up with.

Well, does it work?

You’re probably wondering, does PhoneRescue do a good job at recovering lost/deleted data? Well, the answer is yes, sort of.

The app recovered a lot, but a lot of my data! The problem is that some of it wasn’t actually deleted and still exists on my phone. At other times, PhoneRescue jumbled up information.

For example, it recovered a few text messages (in Romanian) that were sent by my network operator a few months back. The problem was that one of my former collaborators who is based in Australia and can’t speak a word of Romanian was listed as the sender of the messages. While this wasn’t a huge problem for me, such mix-ups have the potential to make it harder for users to quickly find the piece of information they are seeking. 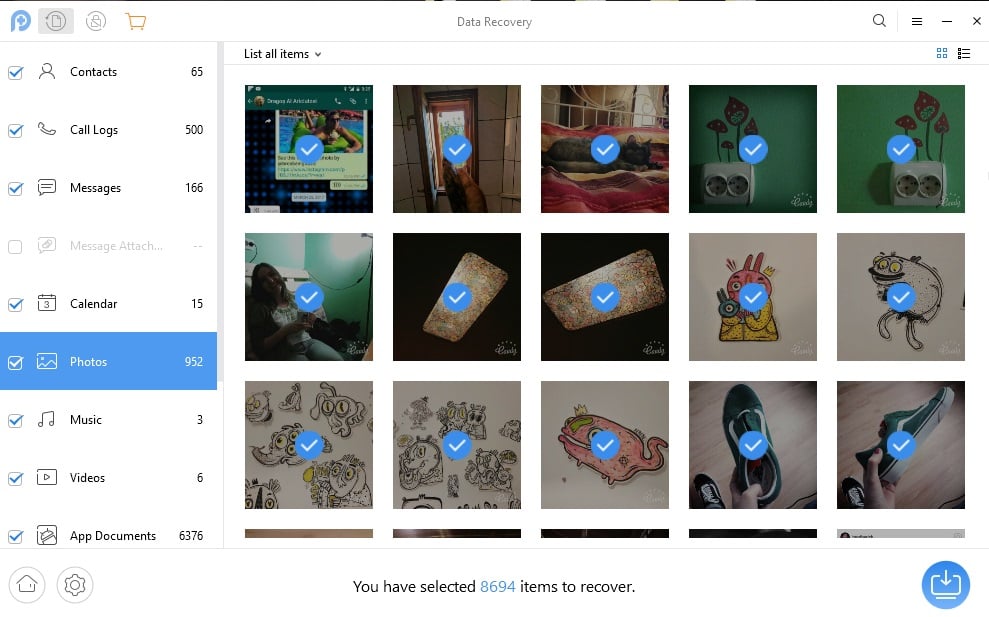 Nevertheless, the app did a good job at recovering some deleted pictures from a birthday party I attended back in February and I’m thankful for that at least. 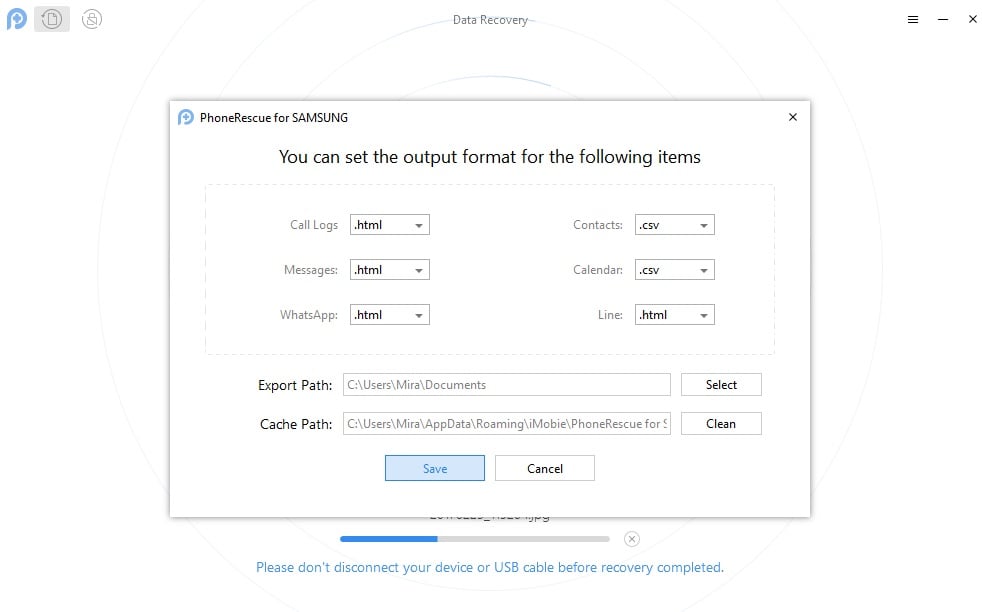 Another great feature is that the app lets you recover data directly to your Android device, so you won’t have to copy it manually from your computer to your phone, although that’s an option too. However, you’ll need to be rooted for the feature to be available. I also have to praise the app for its clean-looking, intuitive user-interface which makes it extremely easy to work with. 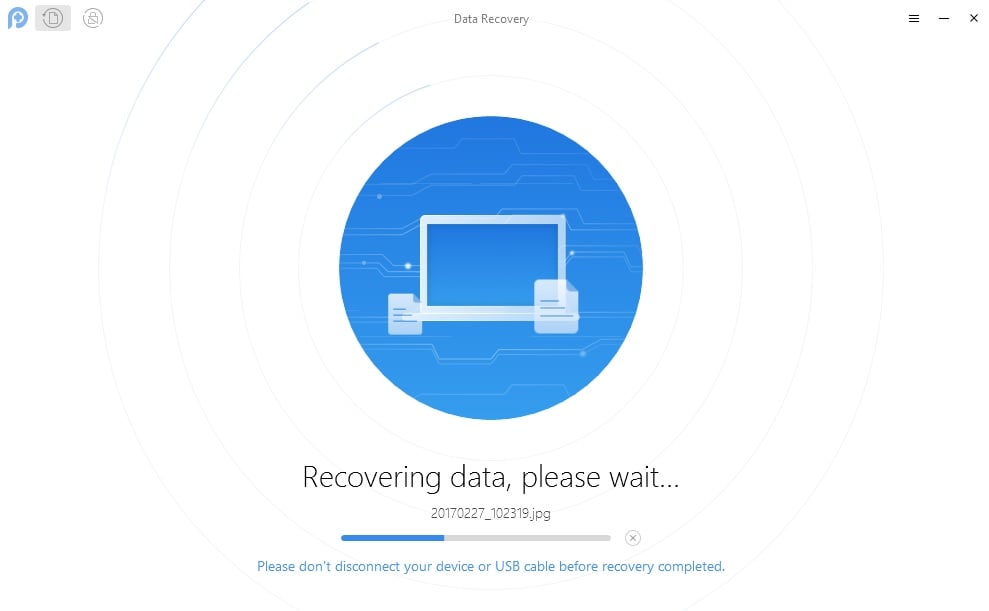 As I mentioned above, PhoneRescue is free to download and install, but you won’t be able to use it indefinitely. In order to do so, you’ll have to acquire a Personal License. For $49.99 you can get the software licensed for 1 computer, use it as long as you want, as well as receive lifetime free support and free updates.

PhoneRescue proved itself to be a very good tool, albeit being riddled with some minor faults (at least the Samsung version). The program is easy to setup and use and even does the rooting for you.

Furthermore, if you ever get confused there’s a truckload of tips and guides on how to best use the app waiting for you on the developer’s website. So if you too have lost some files or photos recently, you can go ahead and give PhoneRescue a try.