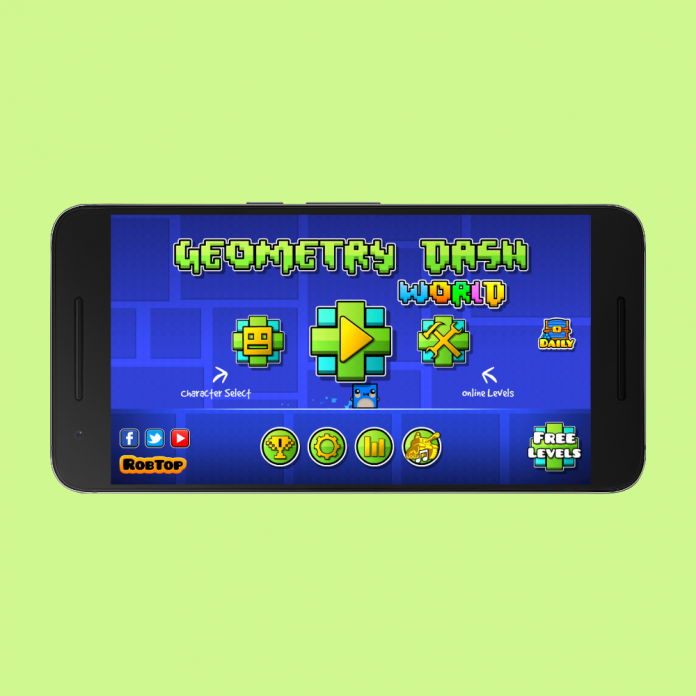 I don’t know why, but every day, there’s more and more games popping up on the Play Store with excruciating difficulty. Why do Android users like to torture themselves? Anyways, if you’re among the millions of people who are looking for a game that will test your patience, then I have great news for you. Geometry Dash World joins the family with the same gameplay, but new ways of pulling your hair out.

Geometry Dash has such a simple gameplay that it (rightly) assumes that you will not need a tutorial in order to get the basics of it. The game is fairly simple: you control a block that slides by itself, and your goal is to reach the end of the level in one piece. Of course, throughout the level, you’ll encounter multiple obstacles and enemies that are waiting for you to fail in order to show their deadly claws.

There is one simple control, executed by tapping anywhere on the screen (provided that it’s not the pause button). This will make your token jump in the air. Holding the screen will make you jump repeatedly, while jumping inside specific floating orbs will grant you another jump mid-air. That’s it, tap until you get to the finish line and you’ll be fine.

As we can see, the game is fairly simple, but since it is very fast-paced and obstacles are intelligently placed, the game can get super complicated. However, even though it gets very tricky, you never feel like the game is cheap and kills you for its own amusement. Stages are very well designed, and thus you need to know what you’re doing and not just try stuff at random in order to succeed.

This is why, when clearing a level, you get a huge feeling of accomplishment, just as when you pass that exam you thought it was impossible. Since the game adds components in a very imaginative, but unpredictable way, levels get harder and harder as you progress.

You end up figuring out a lot of the elements you encounter through trial and error. For example, the first time you see these previously mentioned double-jump orbs, you will have no way of knowing what are they for (well, you will know, because you read this article first).

There’s one level in which your character jumps into some sort of spaceship and flies through the levels. This is very fun, and frankly, not that complicated, but the fact that it comes out of nowhere can put you off and it will be game over for you.

There are no checkpoints: if you die, you die. The only way back is to repeat the whole level. This is not problematic because levels are probably 30 second each. But don’t let that fool you: you could be stuck in one of these for hours.

If you don’t like how your “character” looks, there’s a myriad of customization options as well. Some of them are free, some are unlockable through game progression, some are paid, but all of them look fine.

Speaking of payments, apart from this shop for customizing your sprite, there are no other microtransactions or pay blocks. However, Geometry Dash World is very, very heavy on ads. I don’t know what is wrong with me, but I managed to activate the ads instead of closing them most of the time. The full game is $1.99, so you may want to pay for it to avoid pesky ads and support the developers.

The full game will also unlock the possibility of creating your own stages, which is a must, since the regular game includes only two worlds from which you can choose. Sure, they’re complicated to clear so you’ll go through these stages in a longer timeframe than you would expect, but it’s a pity nonetheless to see such a small amount of stages.

The game is dominated by vibrant colors against a black background. From the main screen to the gameplay, everything is done in a very bright way, with a lot of emphasis on combining the right colors. Although the background is mostly black, it will change some times depending on the circumstances.

This lack of high-level details and presentation means that the app will fly, even in phones with poor internals. I tried it on my Nomu S10, which has medium-low specs, and I found absolutely no issues with it. This is not a statement against the game, though: graphics are simple but they’re executed in a great way. Geometry Dash World teaches us that there’s no need for fancy graphics, as long as they’re done correctly.

This is where Geometry Dash shines. It is, without a doubt, the best part of the game. The game’s soundtrack is absolutely superb, with techno/disco songs making up almost all of it. Songs are made specifically for each level, and it is synchronized with it in a beautiful way. You might think sometimes that some sounds are part of the game’s sound effects, but the fact is that all sound effects have been added to the songs.

For example, you will get specific sounds when jumping through orbs, others when going through platforms that make you jump by default, and, when reaching a new section within the stage, music will change dramatically to a whole new style and tempo. These changes are synchronized with graphics as well, and the game shifts backgrounds or gives some kind of visual cue when they occur. Is is a magnificent experience that has been executed in a sublime way.

If you can get over the fact that you will die a lot, Geometry Dash World is a worthy addition to your game arsenal. Thanks to tightly connected graphical and sound elements, the game provides an awesome, integrated experience that is rarely seen in Play Store games.

While there aren’t that many stages right now, more going to be added in the future, and the custom stage generator can quench your thirst for new content, if you pony up for the full version. Download Geometry Dash World, put on a pair of headphones, and sit back to the great experience that is waiting for you.