Google has taken both their tablets, the Nexus 7 and Nexus 10, and combined them into a single powerhouse. The Nexus 9, which Google debuted on October 15th alongside the Nexus 6 and Android 5.0 Lollipop, is a top of the line device due to its killer hardware and build quality. The Nexus 9 doesn’t have all the extra features, but it does come with Android 5.0 Lollipop out of the box, the 64-bit NVIDIA Tegra K1 processor, and 2 GB of RAM to power it all. Let’s jump right into the Google Nexus 9 review.

The Nexus 9 has three color options available: indigo black, lunar white,and sand. It also has two storage options: 16 or 32 GB. There is an LTE version available, but it is only available in indigo black with 32 GB of storage. The device I have is the 16 GB indigo black version.

This Google tablet is constructed by HTC, who is well-known for their premium design quality on their One series. With a first glance at this device, you can tell that it is made by HTC, but it still has the familiarity of a Nexus device. The Nexus 9 comes with an 8.9 inch display in a 4:3 ratio, that I think makes the tablet easier and more enjoyable to hold. The Nexus 9 is a very solidly built device, and that is due to the surrounding chassis that is constructed of metal. It is squared off, yet slightly angled towards the display away from the back of the device. Coming in at 7.8 mm thick, it gives enough real-estate to rest your fingers on comfortably without touching the bezels and accidentally touching the display. 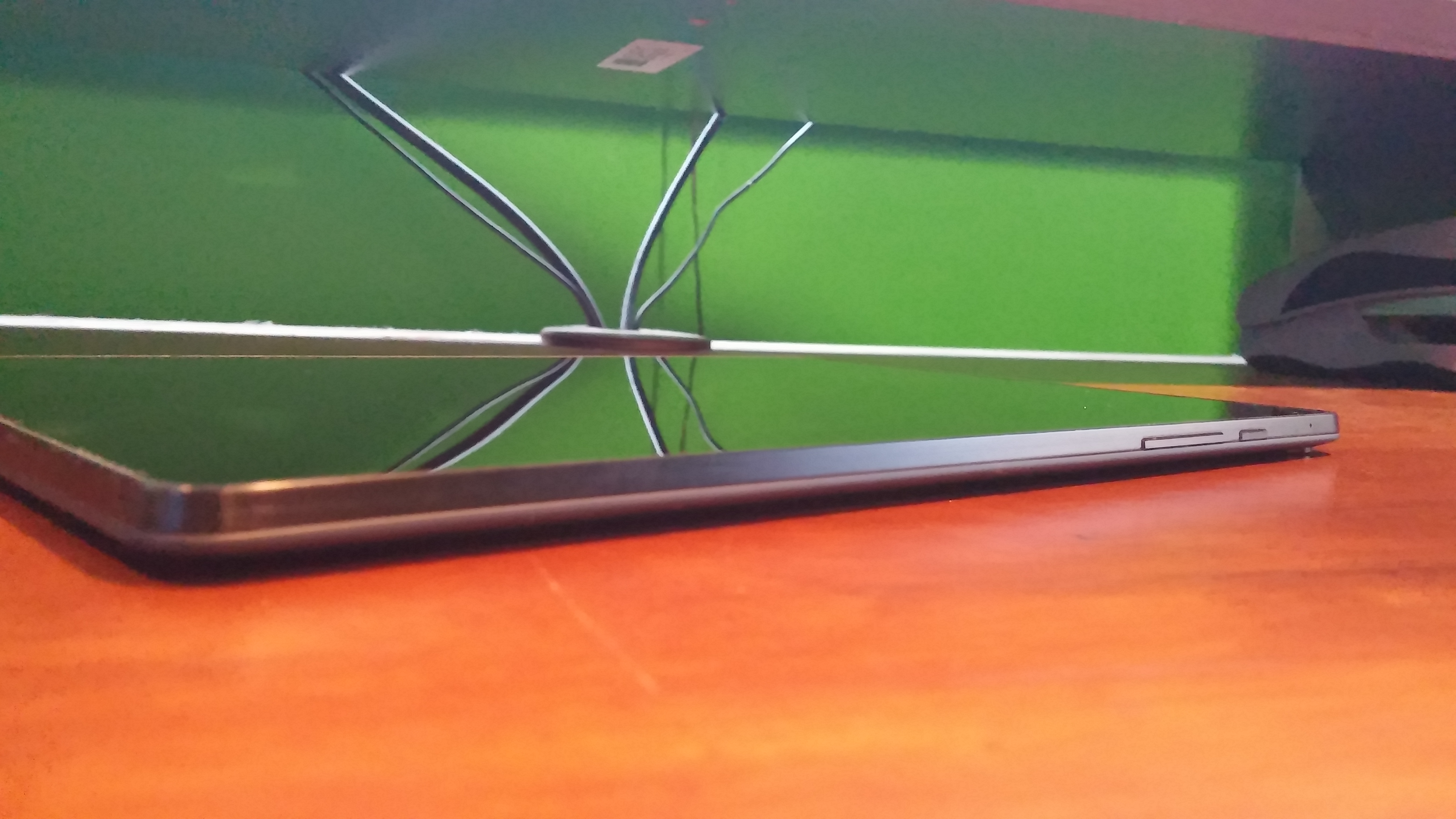 On the right side of the frame are both the power button and volume rockers. HTC did a great job of hiding the buttons, and it makes the edge look seamless. This is both good and bad. While it makes the device look as sleek as ever, it also is a chore to find which button to press. Since the buttons are near flush with the chassis of the device, it tough to know if you are on the volume rockers or power button until you press them.

The back of the device has the classic Nexus soft-touch feel that can be seen on previous Google devices. While it is a fingerprint magnet, it is definitely worth it. The soft-touch back makes the device very easy to hold without the fear of dropping it. 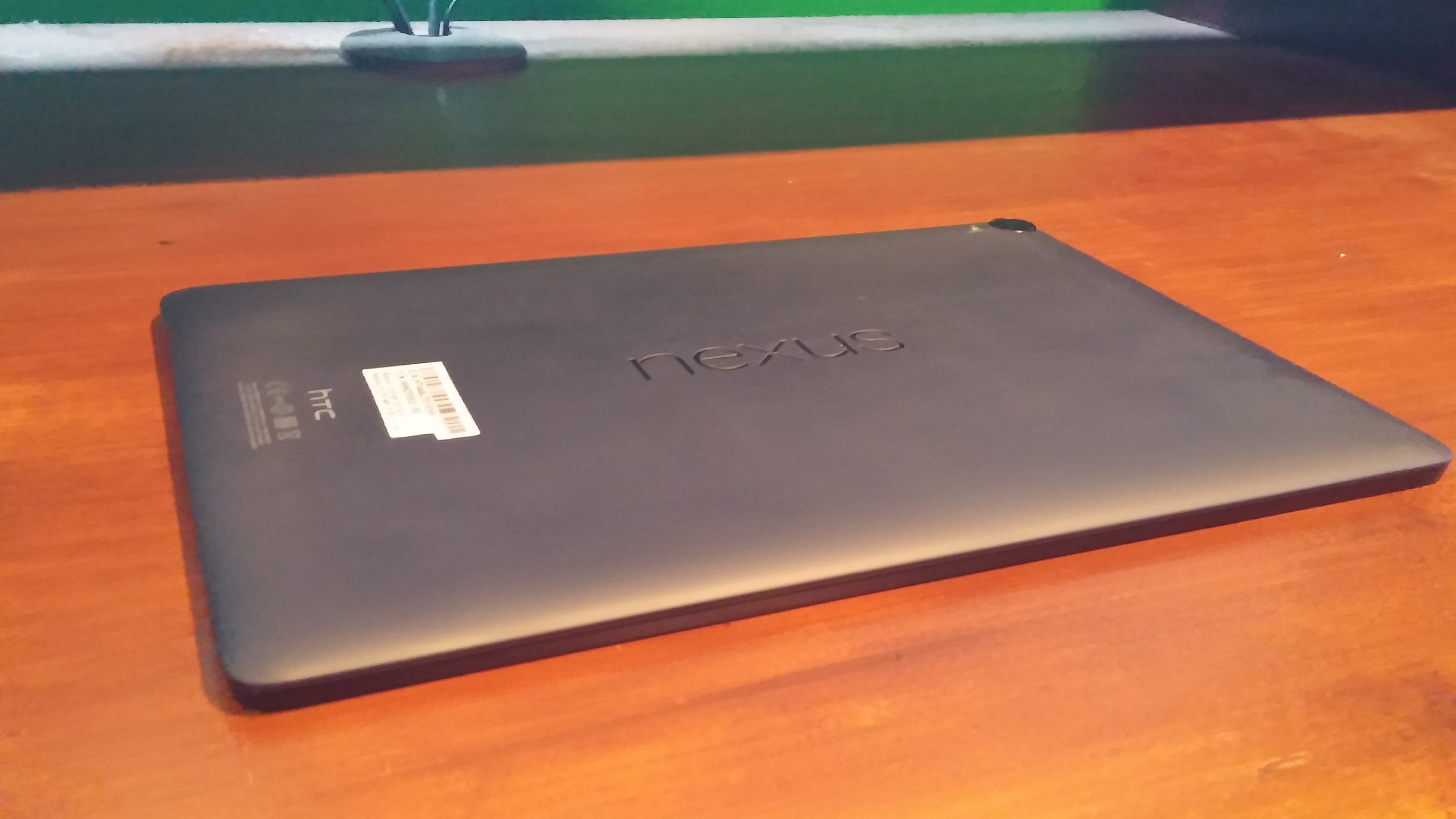 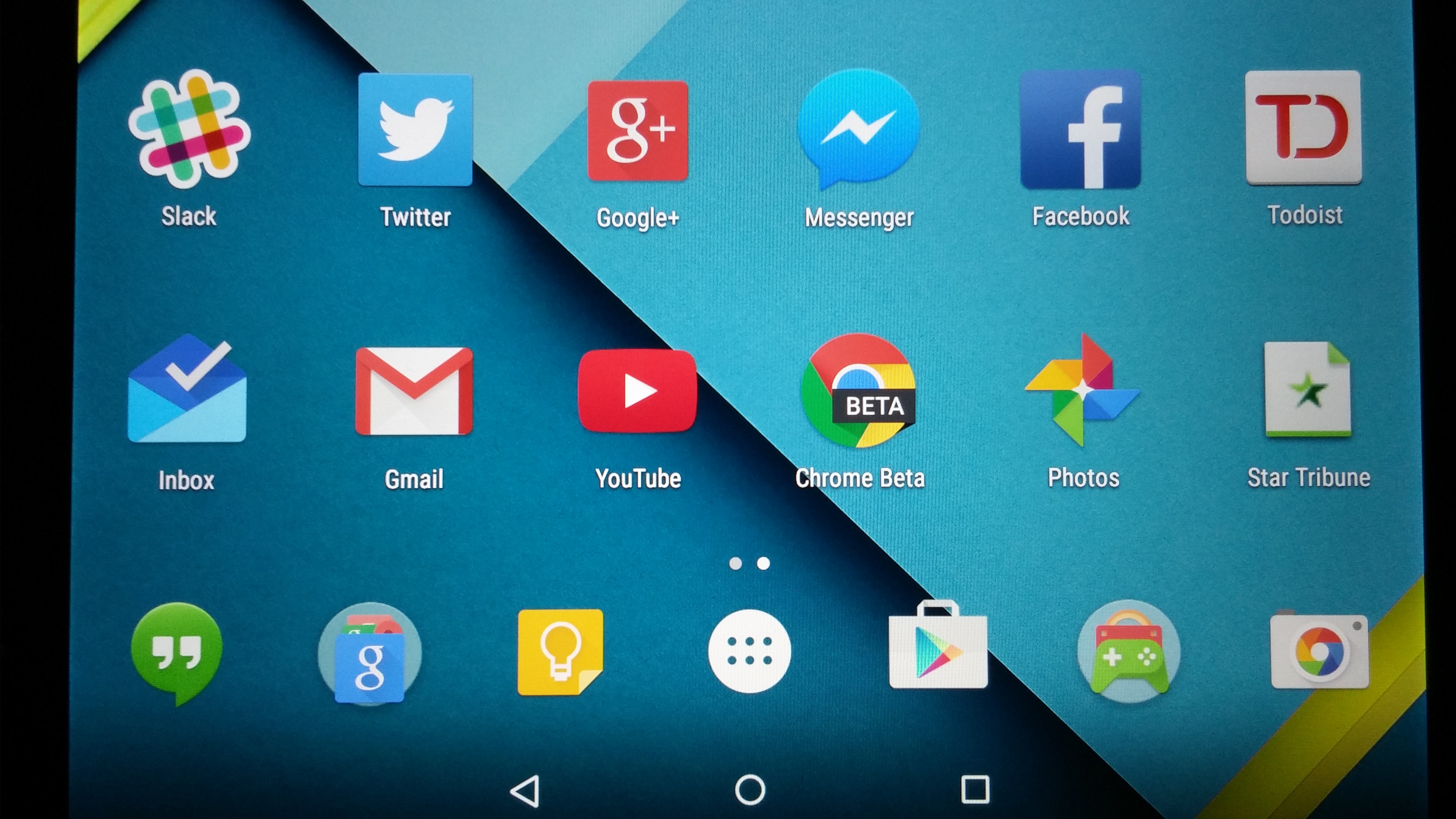 The display which is a 4:3 ratio, looks its best when it is showing dark content, especially while watching movies. Since the device doesn’t have a 16:9 ratio, videos will naturally have black bars on the top and bottom of the video to compensate for the extra space. Darker games and movies look amazing on the Nexus 9, but once content has brighter and flashier graphics, the display doesn’t pop as well.

Aside from content, Android 5.0 Lollipop takes full advantage of the display and everything Google branded looks great and very crisp. You can tell that the Google-based apps are optimized for the 4:3 ratio.

While the Nexus 9 excels at displaying darker content and its own operating system, it also is very good at displaying text. The IPS display isn’t very bright or saturated, so it makes it easier on the eyes while reading.

This category is just for this device, since the Nexus 9 is HTC made. The Nexus 9 features HTC’s own BoomSound speakers on the front panel of the device, one on the bottom and one on the top to create a stereo effect. Front-facing speakers have been one of the more popular features to come on devices since HTC made it popular, and for good reason. Front-facing speakers is a feature I think all devices, especially tablets need to have. I am glad Google included this, and they are loud. The sound is very crisp, even at loud volumes. Mids and highs come through very well, and low-end/bass is better than average. When bass gets too low, it drones out, but that is expected from such small speakers.

My only complaint about the speakers on the Nexus 9 is that they are sunk down into the front of the device. As you can see in the picture, it leads to dust being caught in the speaker grill.

This tablet sports top-notch specifications that render the device ‘future proof’. Google went with the 64-bit NVIDIA Tegra K1 dual-core processor that is clocked at 2.3 GHz. It’s supported by 2 GB of RAM and the all-new Android 5.0 Lollipop.

This is a stock-Android device, so there is no bloatware, just pre-installed Google apps. There is nothing this device can’t handle. On all my previous Android devices, I always tend to modify the animations speed in the developer options and set it at .5x, but this is the only device I decided against it.With the updated Android OS, navigation is as smooth as ever and transitions are always at a high frame rate.

I found myself using the multitasking button more than ever due to how smooth Android 5.0 Lollipop is on the Nexus 9. It is quick and painless switching between apps, and like I stated earlier, the animations and transitions make it everything more enjoyable.

The device does take a little longer to open and close heavier apps/games such as games like Leo’s Fortune. When more screen-intensive apps are open, expect the processor to get warm. It isn’t anything too outrageous.

The Nexus 9 sports a modest 6700 mAh battery that can travel the distance, but it also can be underwhelming. The battery life will definitely be determined on how you use this device, which can be said for all devices.

One thing the device has going for it in the battery department is the excellent standby time. While I consistently use my tablet, it is left to idle the majority of the time during my busy schedule (working, sleeping, and going to school). I will lose around 1-2% over a 8-10 hour period, which is very good.

While the standby time is great, I expected more optimization due to the new ART run-time and the latest 5.0 update. I will give Google a beak on the Nexus 9, due to the fact that Lollipop just got released, and more updates will ensue. Not only did battery life not live up to my expectations, the charging time is the worst part. It regularly takes hours to charge the device, especially if you are down on the 10-15% range.

I can expect around 4-6 hours of screen on time with normal to heavier usage on one charge. Once I start pushing the Tegra K1, there is a steep drop in battery life. Below are some battery statistics screenshots from my device. 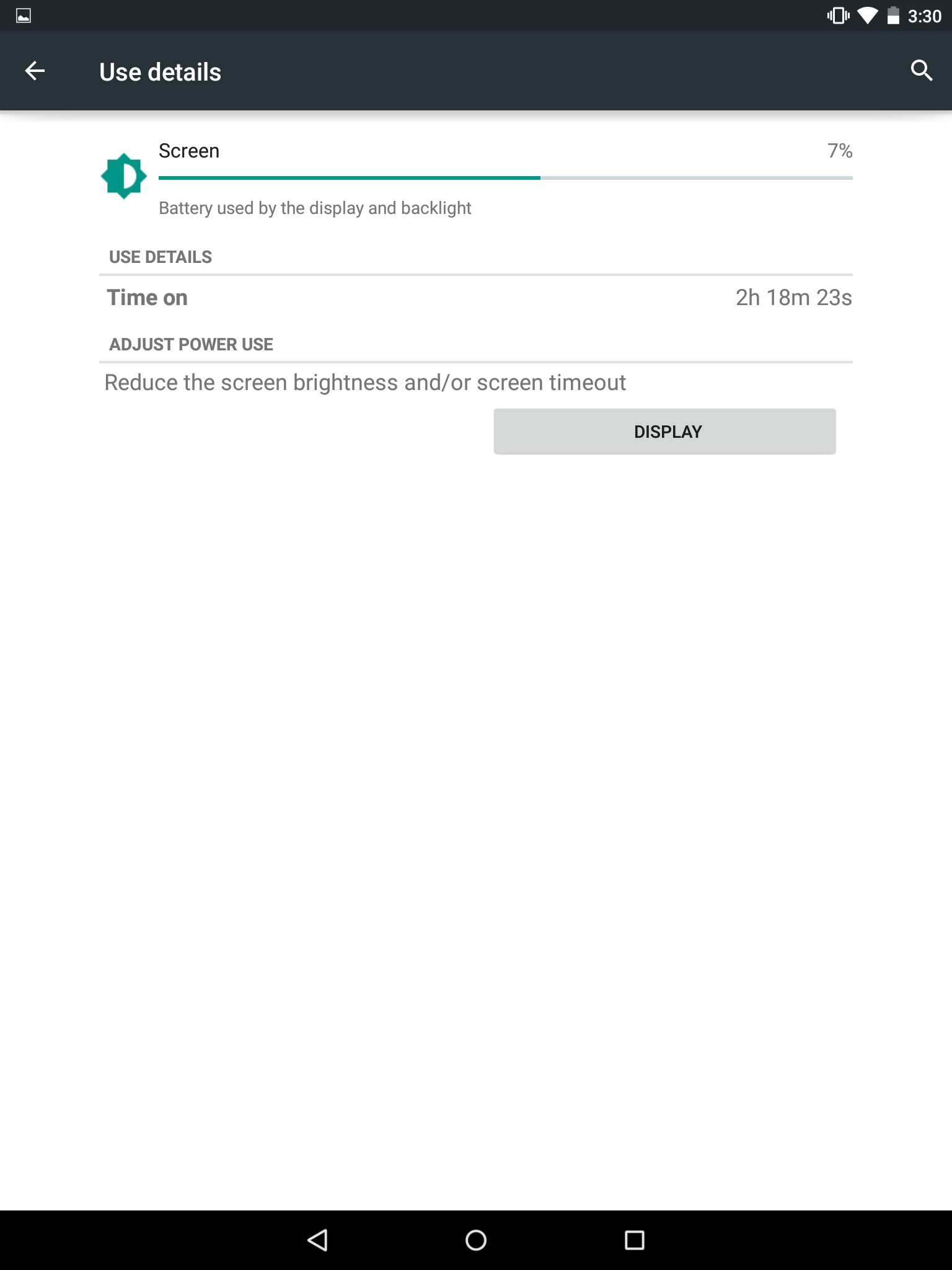 Overall, this tablet is one of the best Android tablets I’ve seen, and is the only one to offer a pure Android experience. If you are an Android-enthusiast there is no question; this is the device you want. Between the awesome Tegra K1 processor and prompt updates, you can’t go wrong.

There is not an area that the device falls behind the competition, and the majority of things that are wrong with it are very fixable via software updates. Android 5.0 Lollipop brings the ultimate Android experience with some bugs, but it is still fairly new. I expect the performance of the Nexus 9 only to improve. Google has brought me back into the tablet world with how well this device performs and I would definitely recommend the Nexus 9 to anyone.