The Lenovo Yoga Book is one of the most unique and attractive devices I’ve ever seen. I put it up with the Samsung Galaxy Note 7 and the Apple iPhone 5 as devices that I lusted after and had to have in my hands as soon as they were announced. The slim, sleek, and well-built Yoga Book is trying to reinvent… something. I don’t know if Lenovo is trying to reinvent laptops, tablets, or make them both obsolete with the Yoga Book but what we’re left with is a great product without a real category. 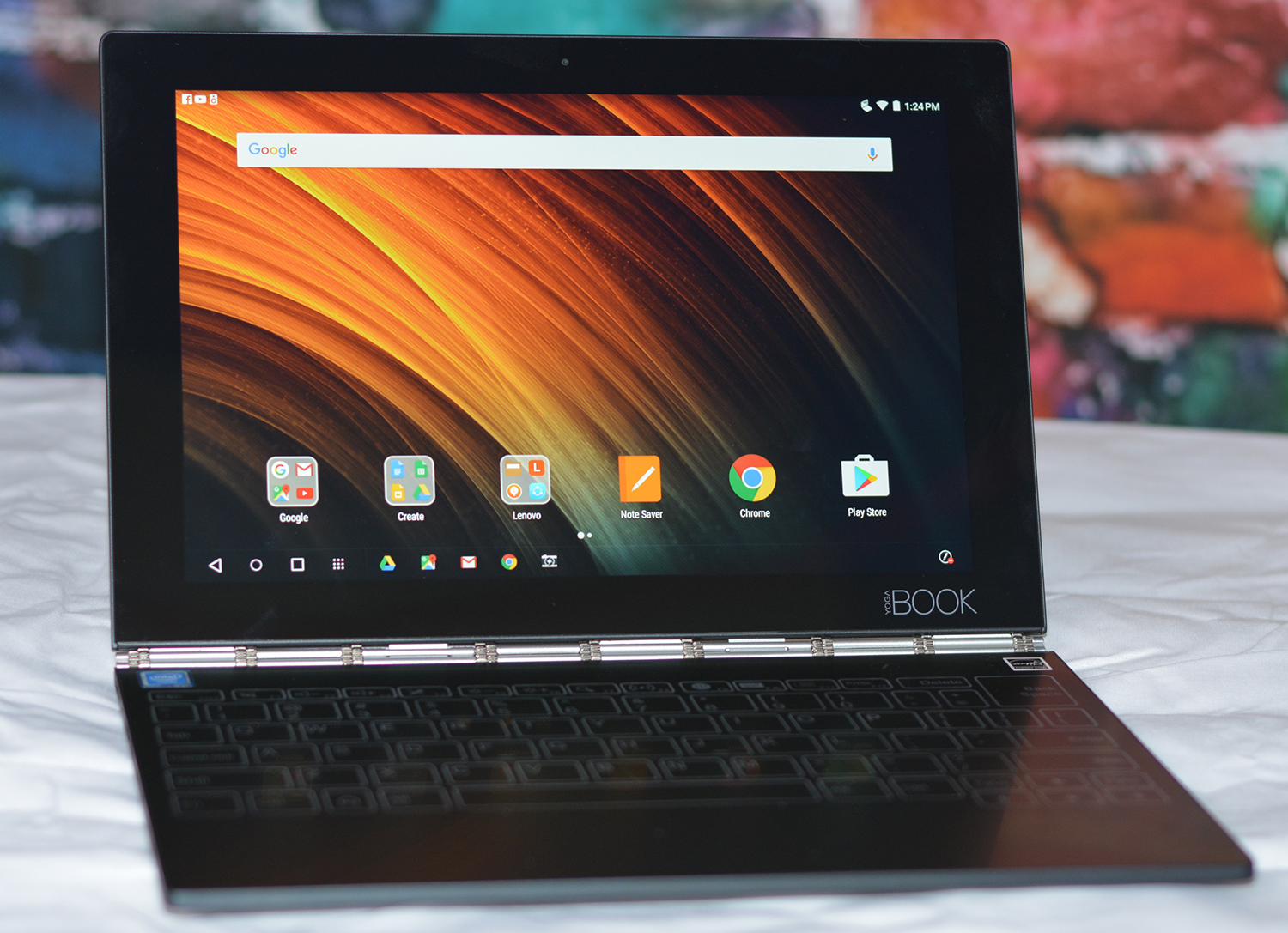 Let’s get the internals out of the way. The Lenovo Yoga Book is powered by a 2.4GHz quad-core Intel Atom processor. Atom processors aren’t great for tasks like RAW photo editing, video editing, or intense gaming but generally do a good job with web browsing, word processing, and media consumption and that shows in the Yoga Book. I had no stutters or slowdowns while using YouTube and browsing Reddit or Facebook using apps or in Chrome with several tabs open.

One of the reasons for that might be the 4GB of RAM. It almost seems customary at this point in 2017 to have 4GB of RAM in a device. Any less would probably cost Lenovo in sales, any more would be wasted on a device like this. In addition to the healthy amount of RAM, Lenovo put 64GB of storage into the Yoga Book. You can expand that with the microSD card slot on the left side of the device. I doubled up my storage fairly cheap with a microSD card like this one from SanDisk for $20 that I had laying around and had zero issues playing the movies I had already loaded onto it. 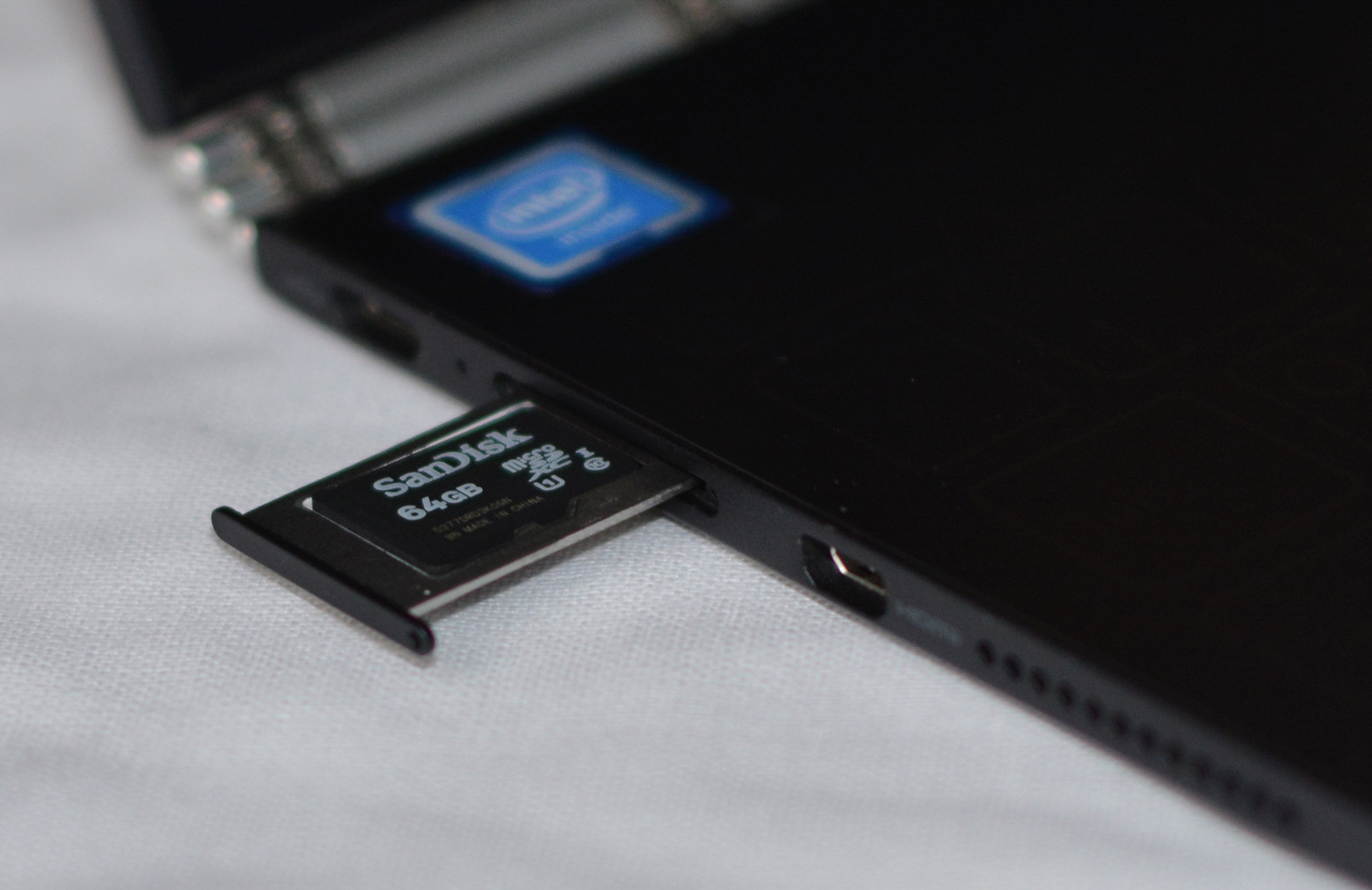 If you’re into taking pictures and for some reason you want to torture yourself, there is an 8MP camera on the rear device (in tablet mode) that will give you passable pictures to post on social media, but you’ll have to be seen taking pictures with a tablet, so that’s on you. The front of the device features a 2MP camera for video conferencing and selfies (I guess) that will get the job done.

Just below that front-facing camera is the 10.1″ 1920 x 1200 display that features decent color accuracy and brightness. Nothing to write home about, but nothing that should dissuade you from buying the tablet/laptop hybrid, either. It’s perfect for sitting in a Starbucks and browsing around the web, but if you decide to pick the park bench on a sunny day, you’ll have issues.

Traveling to the south of the screen brings us to the biggest selling point of the entire device. The Wacom tablet connects to the screen with a watchband-like hinge. It doubles as a drawing tablet with the included stylus or a virtual keyboard. It’s one of the most interesting designs I’ve seen in a while and even after a month of use, I’m still not sure what to make of it.

Typing on this thing is really interesting. I wouldn’t necessarily call it bad by any means. The experience sits somewhere between using a crappy third-party iPad Bluetooth keyboard and peck-typing on your phone. I find it really nice to have a full-sized keyboard but since you cannot feel the keys, you obviously need to keep your eyes trained on the virtual keyboard as you type. I thought I would type up this review on the Yoga Book and I quickly decided that was a terrible idea.

The software does learn your typing over time and offers better and better text correction as you go, but this is still not anything you’d want to type more than a moderately long email on. One of the biggest issues I have with the software is that if you backspace in the middle of a word and begin to type again the software will see this as an entirely new word and try to autocorrect for only the new part of the word. This leads to many words just being completely deleted and retyped instead of fixing a mistyped letter like on a regular keyboard.

You do, however, get some feedback when you type on the virtual keyboard. A slight vibration and clicking noise go off for every keypress. Yes, these are needed so you can keep track of when you actually hit a button and when you miss, but the execution is a bit poor. The vibration can be felt all over the device, not just in the general area of where the button is pressed. However, if you type fast enough you can cause the noise generated by the device to lag. The next iteration of the device should fix these issues to make typing a much more pleasurable experience.

When in typing mode you get a mousepad just below the keyboard. Android has decent built-in mouse support (even though not many apps take advantage of it) but the experience here isn’t great. There is some friction and drag when using the mouse and the virtual trackpad is small and squished. 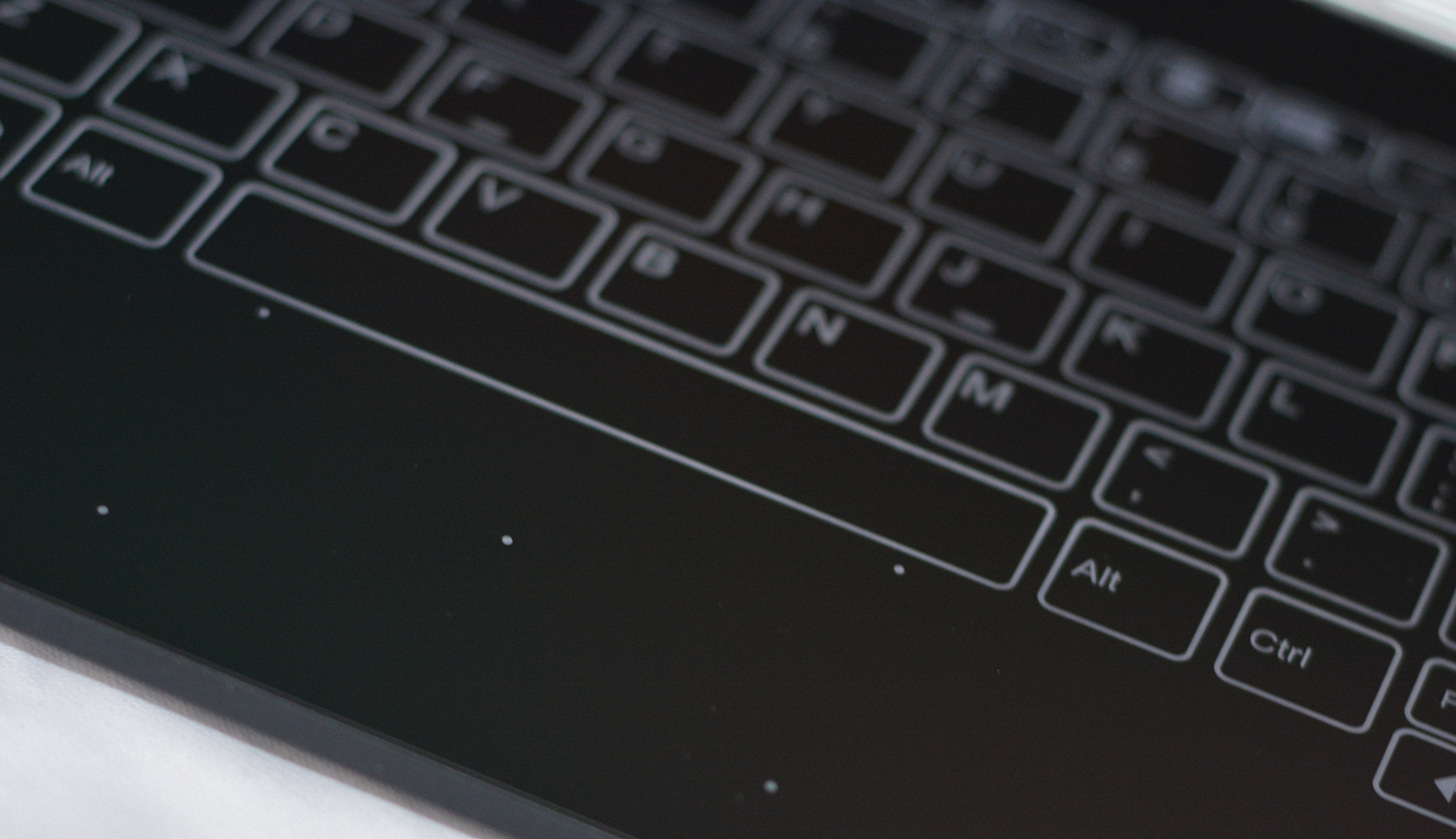 This is a Wacom tablet and as such lets you use a stylus to either take notes or draw. Pressing a little button at the top of the keyboard quickly transitions it into stylus mode for the included stylus. The stylus is pretty big and bulky but does a great job with the Yoga Book. There is hardly any if any at all, lag or accuracy issues to be noticed here. There are also a ton of apps on the Play Store that will let you take advantage of the stylus, but Lenovo included a few for good measure.

The stylus has replaceable tips and can function not only as a stylus, but also an ink pen. Removing the stylus tip with the cap and inserting one of the three ink pen tips turns the stylus into a regular pen in under ten seconds. You can use this pen with the included pad of paper on top of the Wacom tablet to transfer whatever writing from the paper onto the Yoga Book. This is excellent for students or business professionals that prefer to take notes by hand but also need digital versions. That is a limited audience but I believe that audience will absolutely fall in love with this feature. It works flawlessly and reliably.

The left of the device houses most of the ports on the device, the microUSB, microSD, and micro HDMI ports. I’m a bit disappointed to see a microUSB port on a device this new, especially when a USB Type-C port could expand the functionality of the Yoga Book, but maybe Lenovo held off so customers would have a reason to upgrade next year or some manufacturing issue. The microSD card reader is pretty standard as we touched on early and you’ll need to pick up your own micro HDMI to full HDMI dongle as Lenovo hasn’t included one in the box. The right side of the device houses the 3.5mm headphone jack and the clicky, but short-traveling power button and volume rocker.

Both sides of the device have speaker grills, but if you’re using these you’ll be disappointed in all but the most quiet situations. YouTuber Dave2D reported that his pre-production model had issues with volume levels out of the speakers, but the retail model was better. I’m hoping that I have a pre-production model because I’m nothing but disappointed with not only how loud the speakers get but the quality of audio exiting them.

The physical package here is really wonderful. The body is small and tight with the feeling of little wasted space. You can normally feel hollow spots in a device, but the Yoga Book has zero hollow spots and the body has almost no flex to it when in use. The watchband-style hinge is one of my favorites on the market today and does an excellent job keeping the display in place even when you’re applying moderate pressure on the display. My only real gripe is just how gigantic the bezels are. I’d love to see smaller bezels on the same size device. Making the keyboard smaller would be a bad idea but ideally I’d like some more real estate on the display.

So far this review has focused on the device in a standard laptop-style setup but the bottom of the device can fold all the way back too. If you’re looking for a great Android tablet, the list starts with this and probably the Nvidia Sheild K1 which is outmatched by the Yoga Book’s specs, but costs only $200 vs. the $500 price tag of the Yoga Book.

While you won’t be getting the newest version of Android 7.0 Nougat, the Yoga Book does come with Android 6.0 Marshmallow with minimal additions atop of stock Android. Lenovo added some of its own applications like Note Saver and ArtRage that play to the strengths of the Yoga Book, but didn’t fill it up with too much bloat.

You get true multitasking on the Yoga Book with the ability to have multiple windows open next to each other or on top of each other without the functionality being frozen. This was excellent when taking notes for another project and provides enough value that I would consider buying the Yoga Book just for that over using my rather large phone and switching back and forth between apps like I normally do. 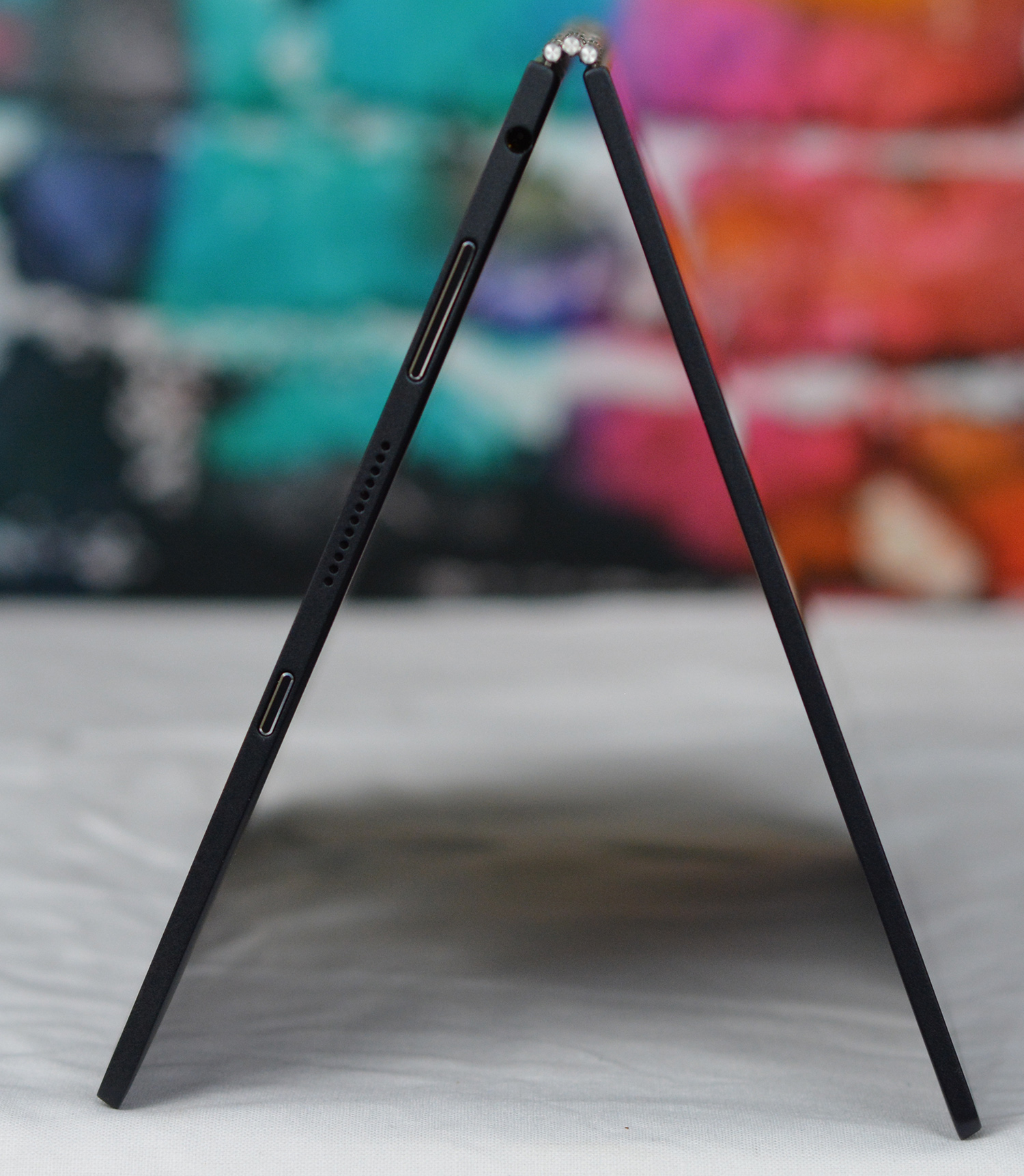 The software here is going to be what you make of it. Samsung is the biggest Android tablet producer right now and it focuses on proving a software experience to match the hardware it’s selling you. This can be a blessing and a curse as it loads down the device with a lot of apps you can’t delete even if you don’t want them, but also puts a lot of functionality at your fingertips right out of the box. Lenovo, on the other hand, adds a few apps for you to use, but is relying on you to go into the Play Store to find more and make the most out of the Yoga Book.

The Lenovo Yoga Book feels like a first generation product, but a really good one. I’ve had my fair share of issues with it like lag in initial typing when you start your note taking, but nothing game-breaking. I love how slim (less than an inch thick) and light (1.5 lbs) it is, too. I feel comfortable carrying it around in my hands unmolested by a case or tucked away in my bag. This thing is so small it makes my Dell XPS feel gigantic by comparison. 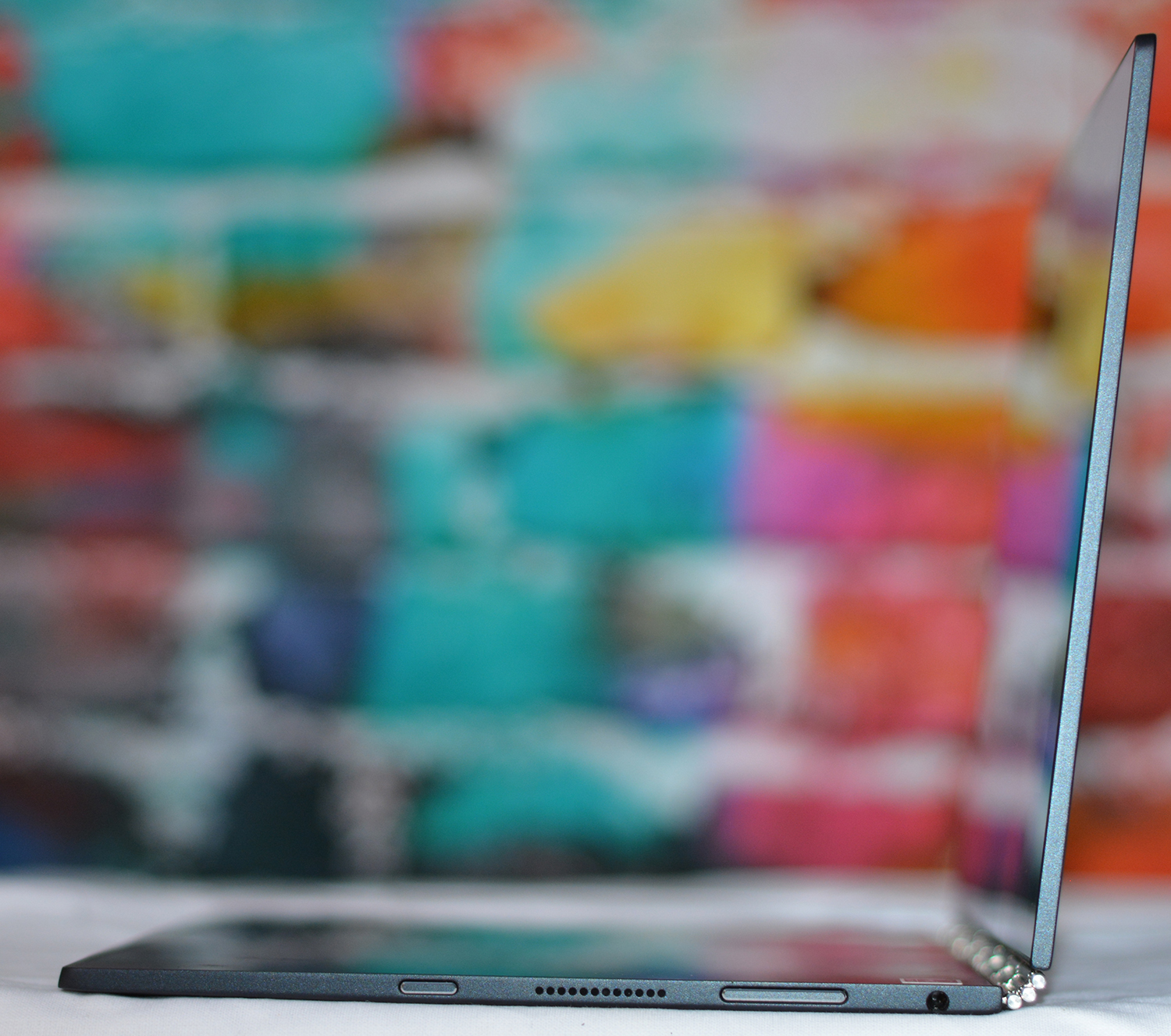 I feel like Lenovo is attacking the segment of iPad customers that buy iPads because there are no other alternatives on the market. The Android version of the Yoga Book comes in at the same base $500 price that the iPad does and much cheaper than the iPad Pro, but offers far more functionality out of the box than both. The software experience is more polished on the iPad, but the Lenovo Yoga Book has that cool factor that makes me want to take it everywhere I go.