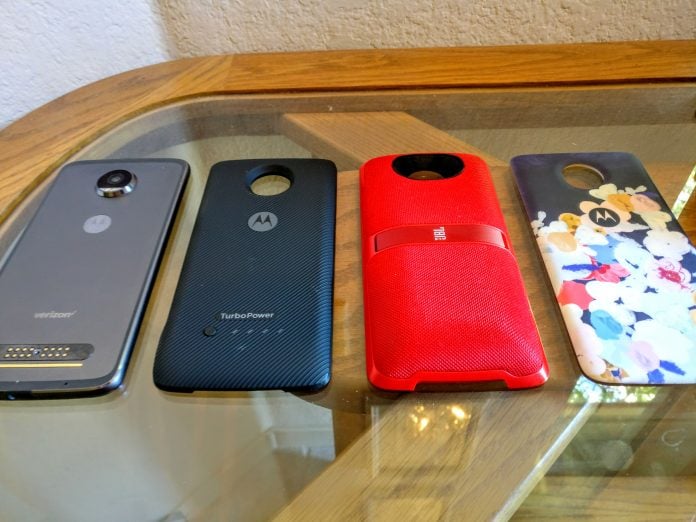 Hey there Android Guys. Today I’ll be taking a look at the Moto Z² Play, which I’ve had the pleasure of toying around with for the past few weeks. What follows is not an in-depth analysis of the inner workings of a phone by any definition, but it is my honest opinions, thoughts, concerns, and tangents of a very solid, if not, perhaps mind-blowing, addition to Moto’s Z line.

While not particularly flashy or world-changing in its build, the Z² Play is a solid, well-made device – very thin and light, with a splash/dust resistant metal chassis, but with an absolutely enormous camera bulge on the back. Moto Mods can be attached via magnets on the back of the unit, holding them securely (relatively – more on that later) in place. With or without Mods connected, the Z² Play never feels fragile in the hand, despite being one of the lighter, slimmer phones I’ve worked with. 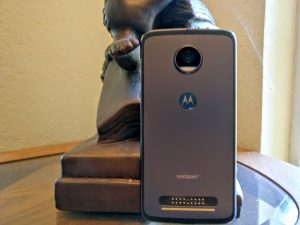 The biggest draw for the Z² Play, obviously, is its Moto Mod support. As mentioned previously, magnets help to secure the mods in place – but there’s just enough wiggle in the connection to leave a bit of doubt in its hold. Furthermore, the fact that the Mods – regardless of the one you use – dominate the phone’s read real estate means that having a traditional case is impossible – so you’re braving the elements when it comes to using the main feature of Moto’s Z line. In addition, the rear speaker – generally used for sound cancellation and things of that nature – is covered when using a mod, which will likely degrade the call quality a bit. As such, I wouldn’t recommend taking calls when using a Mod unless it’s necessary. Despite that design flaw, the Z² Play remains a well-made phone, as should be expected from Motorola. 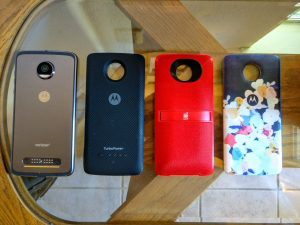 The Z² Play runs on a 5.5″, 1080p Super AMOLED panel, which means I instantly fell in love. It’s not anything eye-popping or jaw-dropping – 1080p is more-or-less the standard these days, and 5.5″ seems to be the sweet spot, size-wise, and though AMOLED screens are delightful, the display simply doesn’t bring anything ground-breaking to the table – which is fine! Like so much else with the Z² Play, Moto has built a solid (if unspectacular) screen into a solid (if unspectacular) handset built around a single, unique feature in Moto Mods.

On the software end of things, there are a couple neat features that set it apart a bit. Color tuning, active display (which uses only a small amount of screen real estate to display notifications when the device is asleep), and proximity wake (which lets you wake your phone by waving your hand over it while keeping the screen off while it’s in your pocket) all lend little touches of uniquity (probably not a word) to an otherwise solidly performing, but not terribly exotic, display.

Given its reputation as a mid-range smartphone (at $499 unlocked, it lands squarely between the Z² Force and the Moto G5 in both price and specs), it’s not surprising the specifications for this handset are very middle-of-the-road. The version I tested runs a Snapdragon 626, clocked at 2.2GHz. For comparison, the OnePlus 5 ($479) and the Moto Z² Force ($720 + free projector Moto Mod) both run a Snapdragon 835, clocked at 2.45Ghz. Don’t let the clock speeds fool you, the 835 is much faster than is the 626. That being said, the processor in the Z² Play is perfectly adequate for the user base it’s targeting – which is to say, generally not power users.

As far as RAM and storage goes, the Z² Play comes in two flavors – 3/32GB or 4/64GB, the latter of which is $100 more expensive and carrier unlocked. 3GB of RAM is a little light for a modern smartphone, but 4GB is the sweet-spot for a solidly performing device. Both models come with a MicroSD slot, the absence of which is an absolute deal-breaker for some. 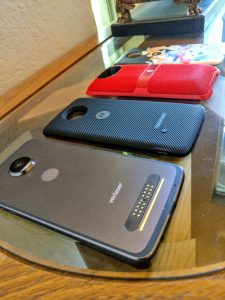 In keeping with a theme, Moto has included middle-of-the-pack technology in its middle-of-the-pack phone. The Z² Play runs on an older standard of WiFi (802.11n, one generation removed from the current ac), and an older standard of Bluetooth (4.2, two generations removed from the current 5), But also offers current-gen technology in Type-C USB charging and a front-mounted fingerprint scanner.

A quick note on said fingerprint scanner; it utilizes fingerprint gestures, designed to mimic the rollerball that used to be a signature on android devices. It can be used to go to your home screen, scroll, navigate left and right, everything the ball used to do. In theory, it sounds like a nice bit of nostalgia at least – in practice, though, it’s become obvious how archaic that method of input is. The gestures are a nice little idea, but they fall flat.

3000mAh battery – all day, ’nuff said. Being a mid-range phone running a 1080p AMOLED screen and a mid-range processor, the Z² Play gets great battery life out of day-to-day use. I went a full day without dipping below 30%, including way too much use at work. Where the Z² Play struggles, however, is when you try to push the processor a little, or when you enter into an area with low signal. The internals work overtime to compensate, and it drains the battery rather quickly. Still, though, a full day’s battery is always a good thing. When you account for the utter ease of use of a Moto Mod Battery Pack, you should never find yourself worrying about a charge.

The first thing you’ll notice about the primary camera on the Z² Play is the snappiness of it, or lack thereof – focusing is quick and smooth, but actually taking pictures is a little clumsy due to the shutter speed, which is a little slower than I’d have liked. It’s surely slower than my trusty OnePlus 3T – but it’s still not too bad. Android cameras and software have come a long way! I remember when I had to hold still for a good two or three seconds in order to take a steady shot while my MyTouch focused, processed, and finally snapped.

You can see a few samples from both the front and back shooters below, in a variety of lighting and distance examples. Note that even at full zoom on a shot, it’s still a relatively passable picture! Unfortunately, selfie-cameras aren’t much good for anything other than selfies, so you’re stuck with my ugly mug and my Cheese smile.

While there’s nothing amazing about the back camera (12mp, 1.4 µm) or the selfie camera (5 MP, 1.4 µm), the latter does have one relatively unique feature among smart phones (or, at least, smartphones I’ve owned); a front flash! While very useful, this is a feature that has, by and large, escaped the attention of all of the major smartphone manufacturers. LG, Samsung, and HTC – with a few exceptions – have left a front flash off their respective phones. It should be noted that Sony has a number of models with a front flash, but it’s definitely not a common thing. But I love it! 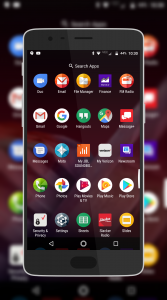 As per usual for Moto, the Z² Play runs a fairly unmodified version of stock Android. There are a couple quality-of-life modifications included (the aforementioned Active Display, for example), but for the most part Android purists will be pleased.

Given that I was testing the Verizon version of the phone, it’s no surprise that it came front-loaded with a bunch of gross Verizon Bloat – Verizon, Yahoo, Slacker, Newsroom, Yahoo Weather, and the NFL app all came pre-loaded and are non-removable. The best you can hope for is to disable them. It’s not a terrible amount of bloat, and I suspect the Unlocked version does not include them, but I will forever vehemently disagree with carriers digging their claws into my phone.

It’s refreshing to see some manufacturers (notably, Moto and OnePlus) deliver devices that remain faithful to the core operating system they run, while still adding features that users both want and will use. Android is great, but it isn’t perfect – why not improve on it? Meanwhile, Samsung continues to think it knows better and slathers its OS with a thick coat of shiny paint that flecks away after only a couple months. 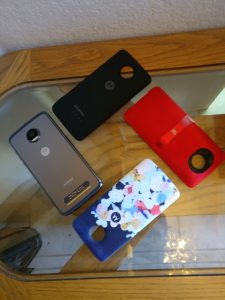 This is a review of the Moto Z² Play, not of its Mods. I’ll be detailing the three Mods I tested in upcoming posts, but I have a few thoughts on Moto Mods in general, and how they work with the Z² Play.

While all the Mods I’ve used are well-made and easy to use, they seem a mite inconvenient to carry around. How are we expected to be transporting these mods? I have trouble seeing a world where the Mod contact points can withstand being banged around in my pocket without getting bent, dirty or otherwise damaged. Maybe a Moto-branded carrying case, or a sleeve? Further, with the inability to use a traditional case with the Z brand of Moto devices, how are expected to keep our phones safe, unless we constantly remove it from a flexible case?

That being said, the overall design of the Moto Mod system is pretty clever. Moto has expanded on the utility of smartphones immensely by creating a modular system for adding and removing functionality on a per-case basis. Need more battery? Slap on a battery pack, no cables required. Need extra camera power for a shoot? Connect a Hasselblad camera unit. It’s all very clever, despite its inherent flaws and drawbacks. Personally, I feel like the inevitable second generation of Moto Mods will be what separates Moto from other smartphone brands.

As I mentioned above, there are two variants for the Z² Play. The first version is a 3/32GB model, for $405 – Verizon only. The second model is $499 – its carrier unlocked and comes with a RAM/Storage upgrade of 4/64GB. Being a faithful T-Mobile user, I can’t encourage you enough to go with the latter; though that price bump is a bit prohibitive, taking it from a nice mid-range phone and catapulting it into a pricier tier. Compared to the newly announced Z² Force, though, ($720) it’s the cheapest way to enter into the Moto Mod scene this generation.

The skinny is this – if you want to get in on the Moto Mod hype, but don’t want to invest in a $700 phone, the Z² Play is for you. If you’re looking for a great, badass phone in the $500 range, there are other, better options out there.

Moto’s Z² Play is available now, through Verizon or carrier-unlocked, starting at $405.