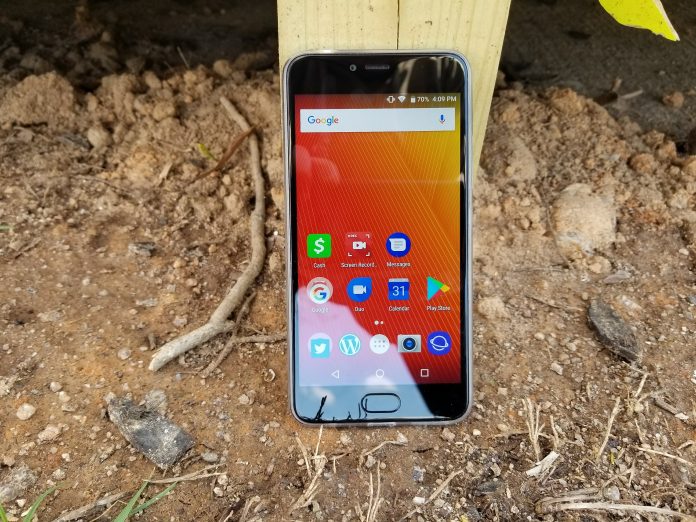 The BLU S1 marks the beginning of a new approach for Florida-based Android OEM BLU. A company whose acronym meaning “Bold Like Us” wants to market the company as one unafraid to take risks in order to better the smartphone experience. The company’s latest device is the first of its kind from the OEM to feature both GSM and CDMA (though limited) support.

If you want some idea of what to expect in my review before I break into the review, here it is: the BLU S1 is great in some respects, solid in others, and needs some work in others. The BLU S1’s performance is a mixed bag that could impress you in the right places, but you won’t know until we get into the nitty-gritty of what gives this phone its unique flavor.

First, let’s give a rundown of the specs: 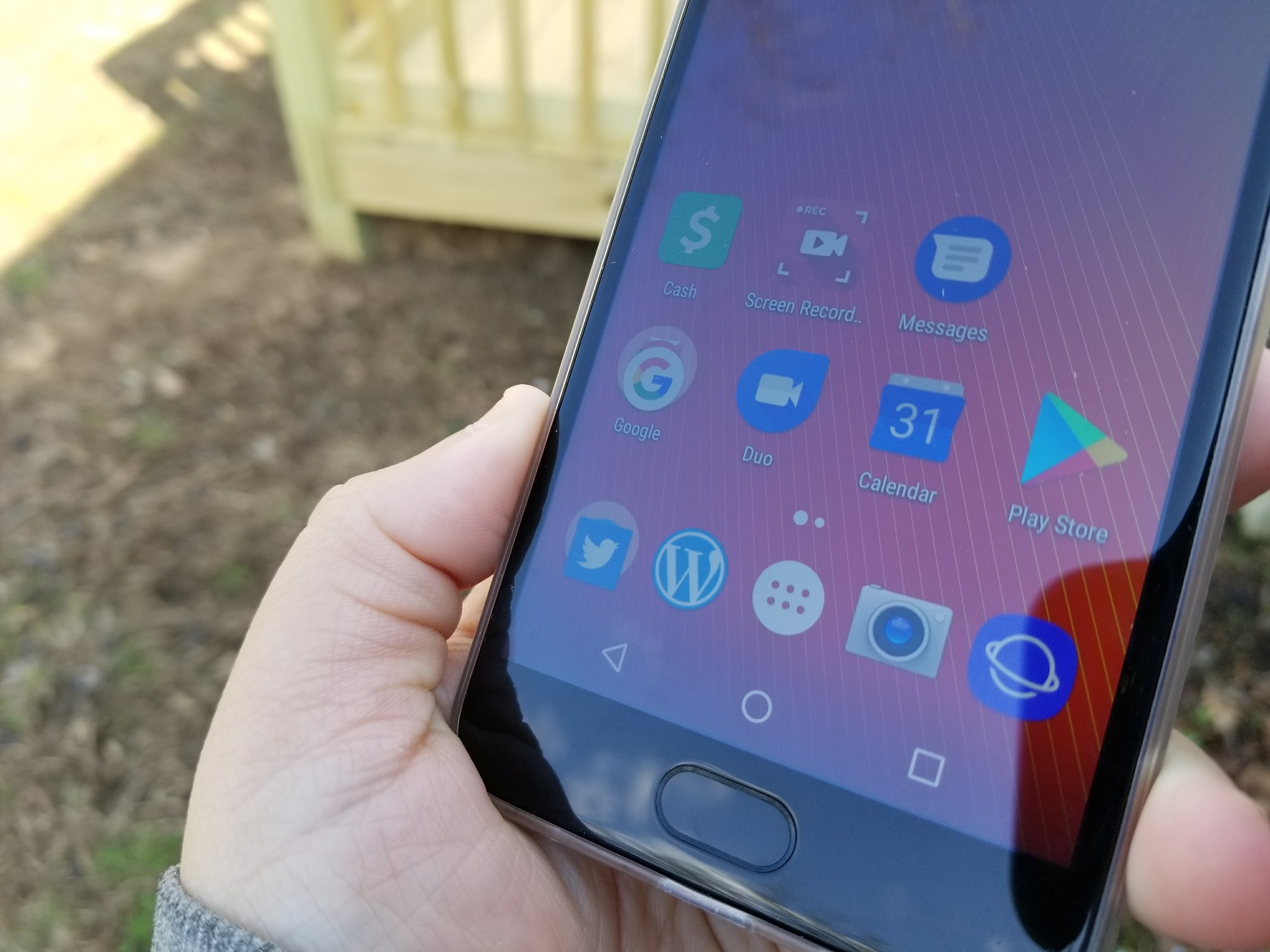 The BLU S1 has a plastic build that makes it nearly the identical twin of the BLU Vivo 8L, but when you hold the phone in your hands, you’ll see that the plastic build doesn’t equal “cheap.” This just goes to show that OEMs can make solid plastic build qualities without compromising on durability and design.

Speaking of design, there are two antenna lines on the BLU S1, one at the top back cover and one at the bottom back cover, but both are uniform and give something of a subtle personality to an otherwise “plain Jane” smartphone.

Near the top of the device’s back cover sits the 13MP camera lens, with a camera flash beneath it and the company’s name, BLU. Turn the BLU S1 over to the front and you can see the front-facing camera at the top left, with a speaker to its right. Beneath the 5.2-inch, Curved Glass Display sits a fingerprint sensor-embedded home button.

On the right side of the Curved Glass Display sits the volume rocker with its volume up and volume down buttons as well as the power/standby button beneath it. The left side houses the dual-SIM card slot, while the bottom of the phone showcases the microphone to the left, micro-USB port in the middle and speaker grille on the right. 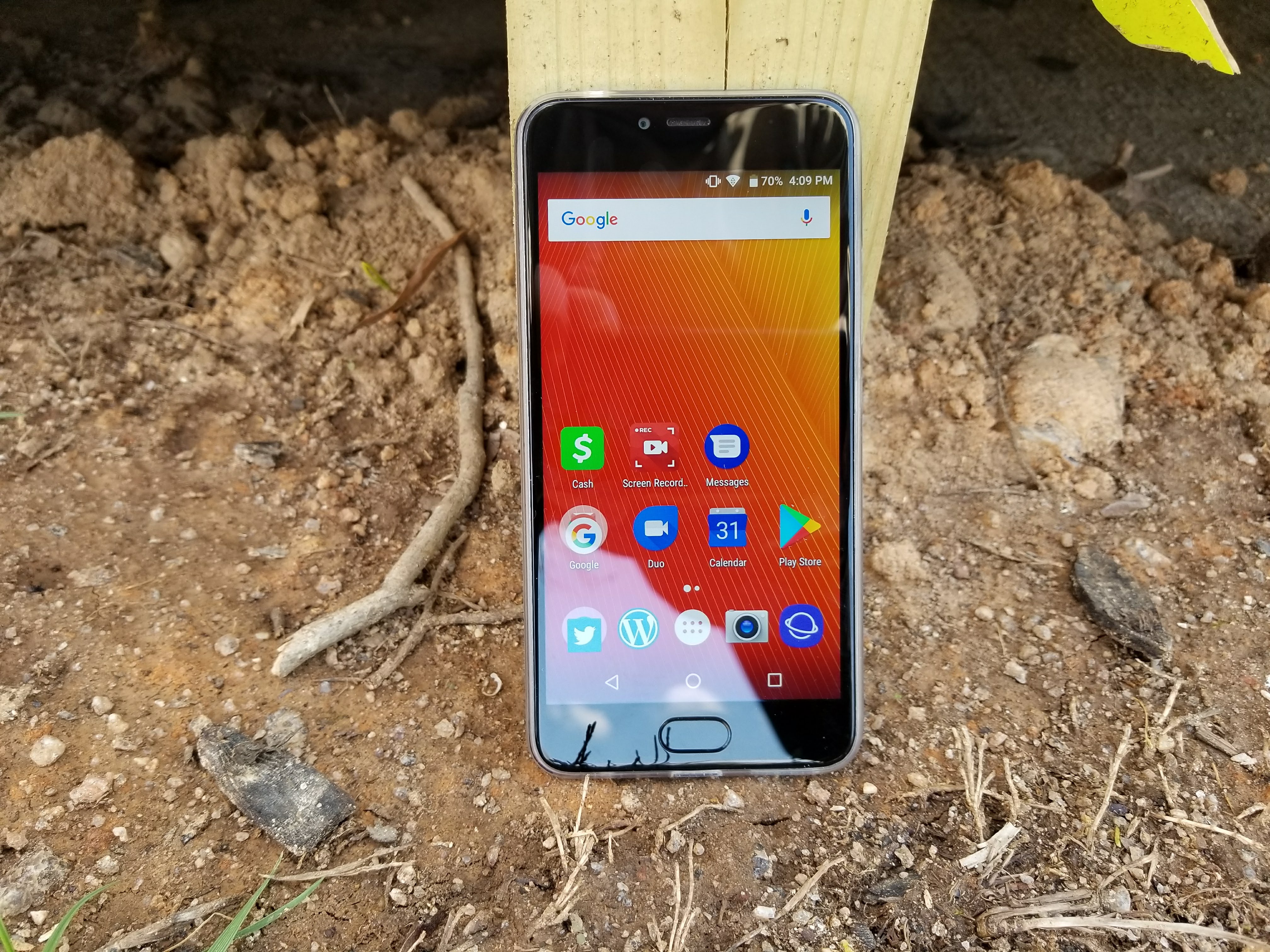 The BLU S1 has a 5.2-inch, Curved Glass Display with an HD (1280 x 720p) screen resolution and 282 PPI pixel density, which represents a good compromise of screen resolution with screen size. The “Curved Glass” here refers to the rounded corners of the display, the curved “edges” if you will; you won’t find anything similar to a curved display here, though, so don’t think of this as a Samsung-made, curved-edge display panel. Corning’s Gorilla Glass 3 makes an appearance here, which is the starting point for durable displays in this budget-friendly, upper entry-level price point.

The display has excellent viewing angles and the color wallpapers will bring out the excellent color production. The panel on the BLU S1 is good, and at this price point, it’s a surprisingly good panel. 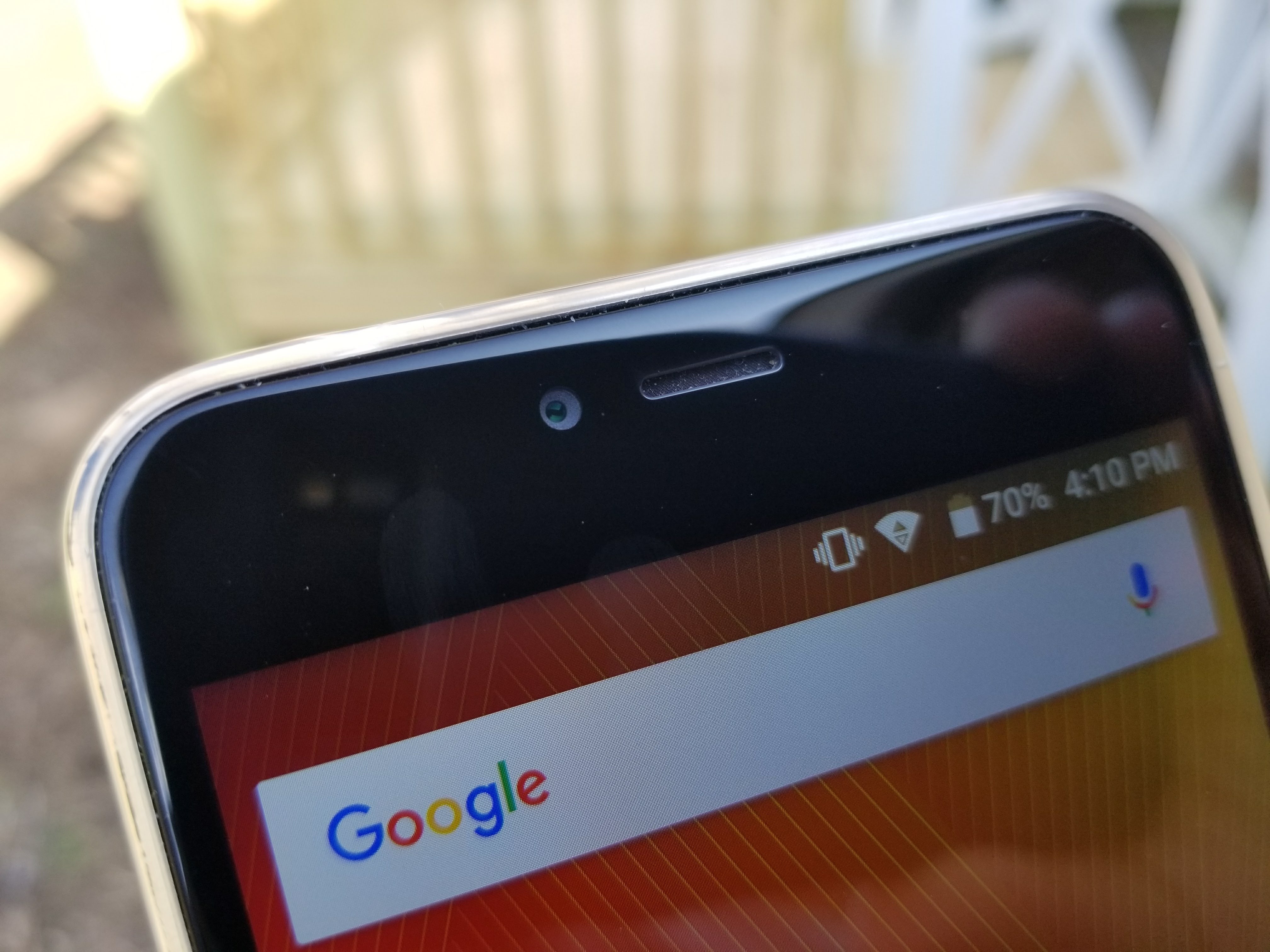 The BLU S1 features a 64-bit, 1.5Ghz octa-core MediaTek MT6750 SoC, which means that this budget-friendly phone has the same processor as smartphones such as the ASUS ZenFone Max Plus (M1), UHANS Max 2, the iPhone X-cloned Oukitel U18, and the Bluboo S8+. These eight cores work similarly to other octa-core smartphones: there are four cores that handle basic, low-intensive tasks, while the remaining four cores handle the most advanced, heavy-intensive tasks.

Overall, there’s a quickness about phone functions, such as launching the camera and other phone apps, though there were some slight stutters in performance in gameplay for example.

I never experienced lag that would force someone to put down the phone, though some individuals would never accept lagging performance in a smartphone no matter the price. The lag in gameplay was noticeable at first, until the first software update seemed to fix the initial lag. Slight stutters here and there continue with further use, though you won’t find stutters interrupting your daily routine. 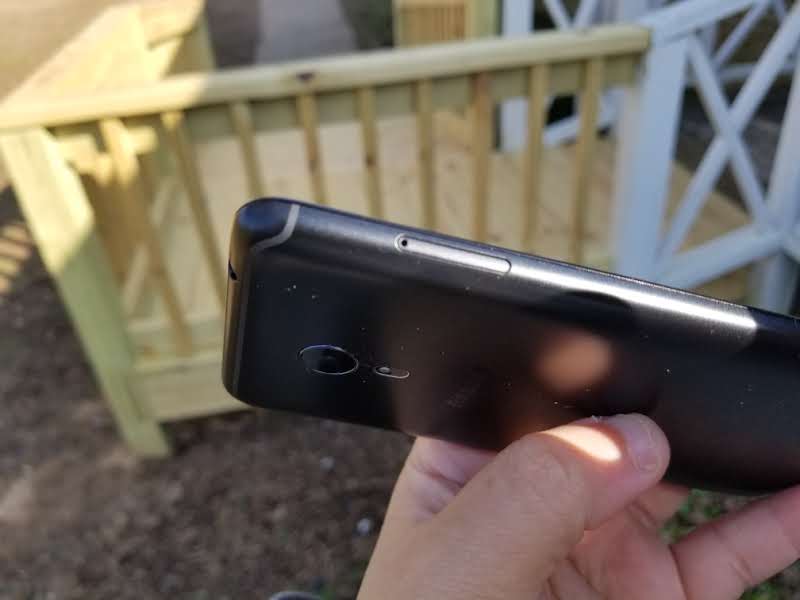 The BLU S1’s 2GB of RAM and 16GB of storage is what you’ll find as a nice compromise when it comes to budget-friendly phones nowadays. I didn’t find apps to reload often as 2GB seems to be about the least an Android device in 2018 needs. Apps stay in memory, so you won’t have to concern yourself with clearing the RAM all the time.

The 16GB of storage is sufficient out of the box, with about 10.5GB of storage available for personal use. Of course, you can always take advantage of the BLU S1’s 64GB microSD card slot, Google Photos cloud storage, and Google Drive, but I think 32GB of storage is a better compromise standard for all smartphones (whether budget-friendly or not).

BLU has aimed for a specific price point here, but the way to keep consumers loyal is to give them a comfortable experience out of the box. 10GB of storage remaining for a phone that costs nearly $200 isn’t giving enough to everyday consumers. 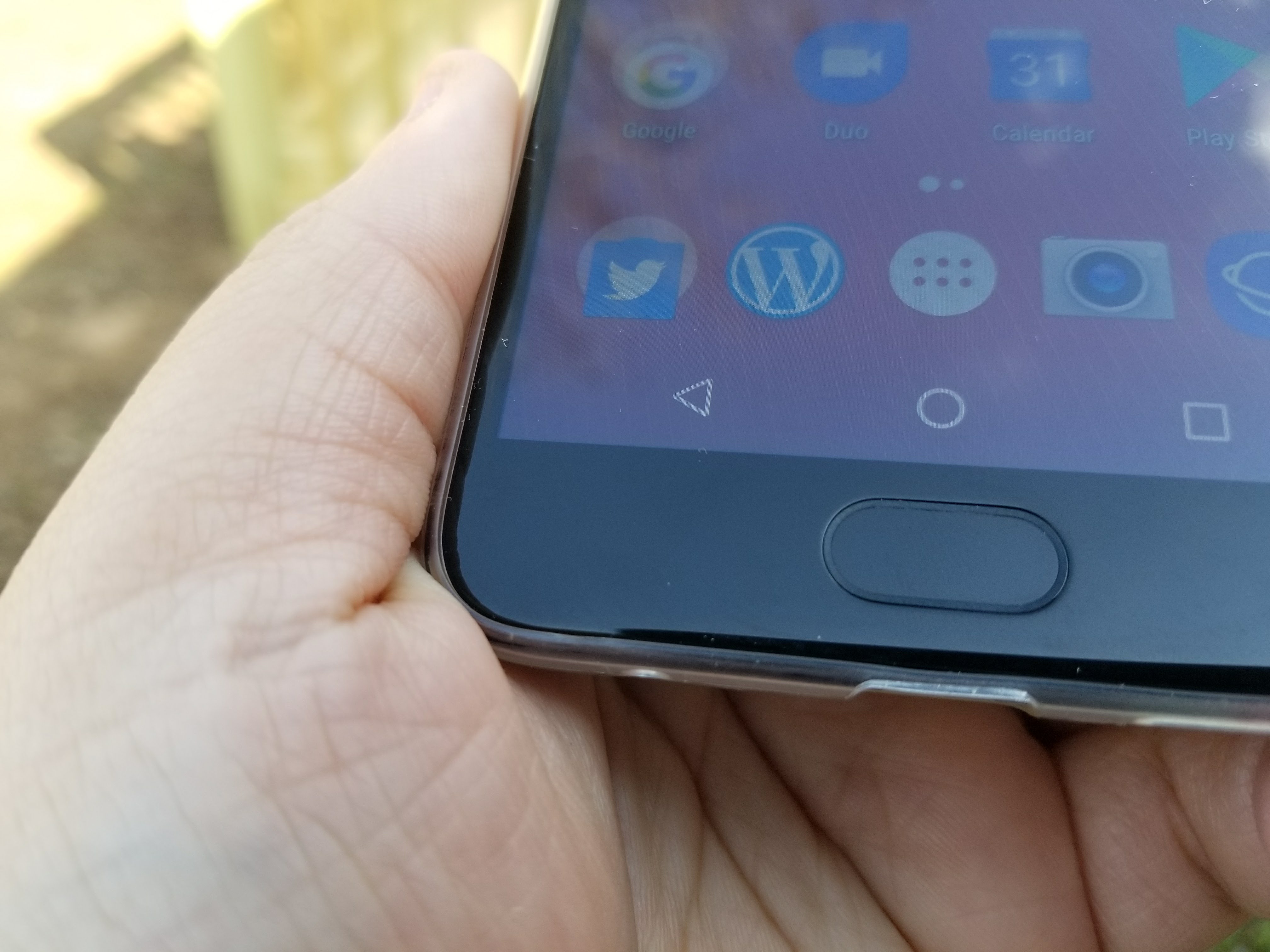 The fingerprint sensor is embedded into the home button. I found it to be easy to set up and extremely responsive. Given that Android has supported this protocol since 6.0, it makes sense to have one present in any phone, regardless of cost.

Do note that you have to press and hold the button for it to return “home”. This could be improved in future models; I’d like to simply touch or swipe it to unlock or go back to the home screen. 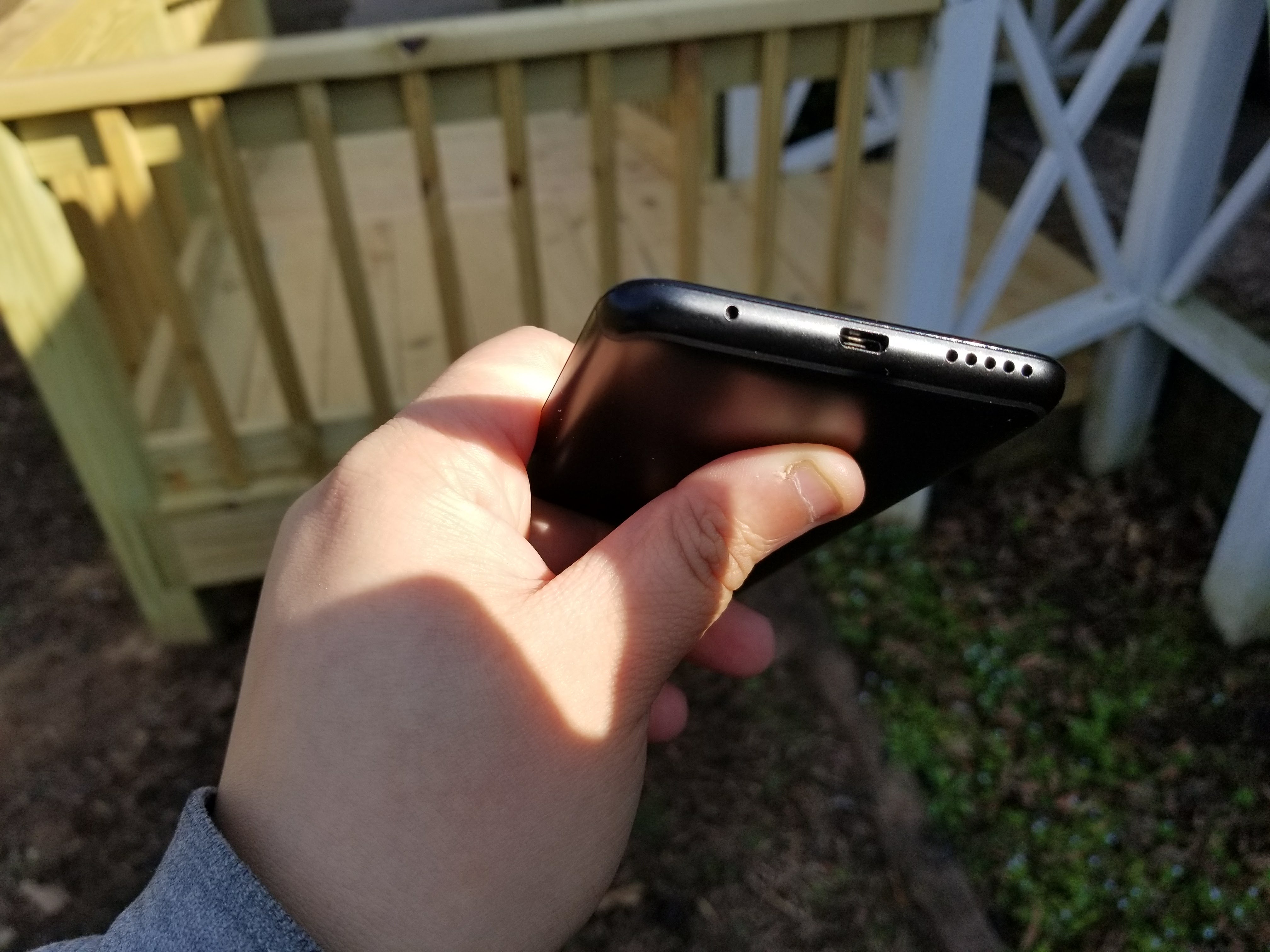 The BLU S1 features a 2,800mAh battery, which performs well when taking into account the phone’s 5.2-inch screen and HD (720p) screen resolution. The phone can last a strong 12 hours in my testing, but I’ve also discovered that you may want to employ Android’s battery saver mode on the phone to get double the battery life when out and about. Employing the battery mode, I got 37 hours of usage out of the BLU S1.

With my own unit, I’ve discovered that the battery stats (software) are somewhat off; I used my phone for 3 hours but noticed that my battery stats had only added another 20 minutes to the SOT, for example. In addition, the battery stats fail to record any activity on the smartphone that

The battery itself is reliable, but you may not want to take the battery stats too seriously.

This means that the BLU S1 charges no higher than 25% after 1 hour plugged in, which is frustrating for those who have used devices that do feature fast charging. BLU should bring fast charging to its devices because in 2018 smartphones should take no longer than 2 hours to charge. 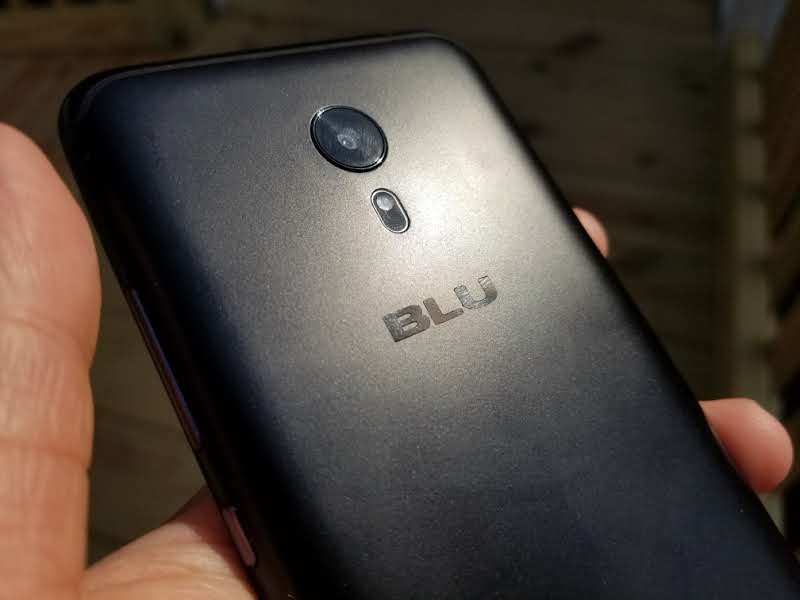 The BLU S1 has two cameras, a front-facing 5MP camera and a rear, 13MP camera. Only the back camera has a camera flash; the front does not.

The camera is rather solid. There are a few problems with the camera such as its inability to render colors accurately at times. Sometimes, light blues are rendered dark, and colors as a whole are rendered stale rather than alive, vibrant, and sharp.

The camera app itself is what you’d expect of the Google Camera app: camera filters, HDR, Flash, White Balance, Exposure, and other settings. You won’t find advanced features like you would in say an LG device, but there’s more than enough here to get good pictures out of the S1.

One of the issues with the 5MP selfie camera is that it tends to have noise in selfies taken up close. Taking a selfie in my turquoise green polo shirt showed a lot of image noise in the shirt itself. As for the 13MP rear camera, images can often be smeared and smudged because the back camera lacks a protective lens cover to prevent smudging and smearing. This means that you’ll need to use a cloth or sleeve to quickly clean your back camera lens before taking photos in the sun or in well-lit rooms and settings.

The BLU S1 is powered by Android 7.0 Nougat, which isn’t the latest Android 8.1 Oreo. Seeing that the S1 was announced back in September, it would’ve been a nice gesture to see this phone arrive with Oreo rather than Nougat. 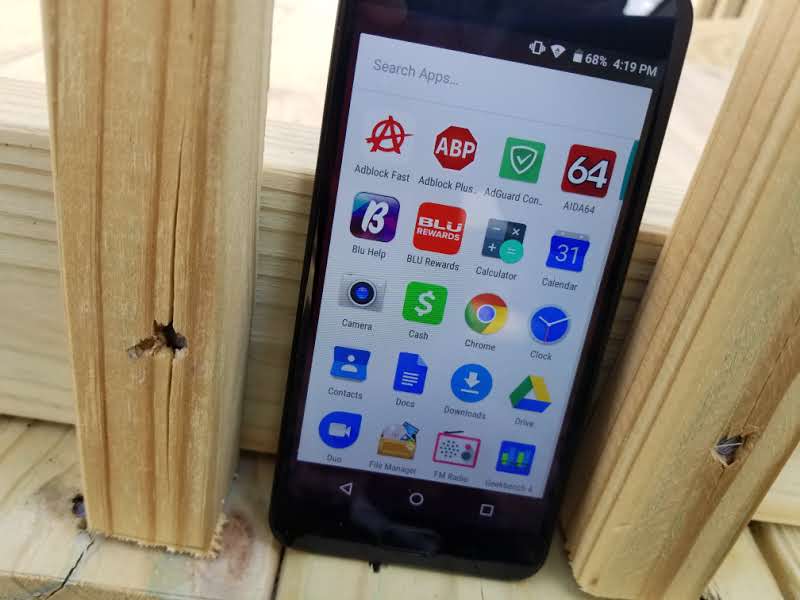 Regardless of its somewhat outdated software, the BLU S1 does provide a pure vanilla Android experience, with the exception of a few BLU apps. Other than that, BLU remains out of your way and allows you to customize your Android experience as you see fit.

Do keep in mind, though, that BLU won’t let you not use its Rewards app without reminding you constantly; I received three or four popups in my notifications each day reminding me to sign up for and take advantage of my 2,000 rewards points through BLU’s Rewards program.

As for updates, it’s unlikely that there’ll be any new OS updates. A 324MB update brought support for new Sprint MVNOs, updates to Google apps, and Google security patches. There hasn’t been an update since and it’s nearly five months since the BLU S1’s release. My suggestion is that, if you want an Android Oreo-powered smartphone, you’ll want to look elsewhere. According to BLU’s own website, the BLU S1 is free at Sprint, giving you a $200 Visa Prepaid card and free SIM card when you activate your BLU S1 on Sprint’s CDMA network. In other words, you can get the BLU S1 for free as a Sprint customer.

The BLU S1 comes in Grey, Black and Gold colors. 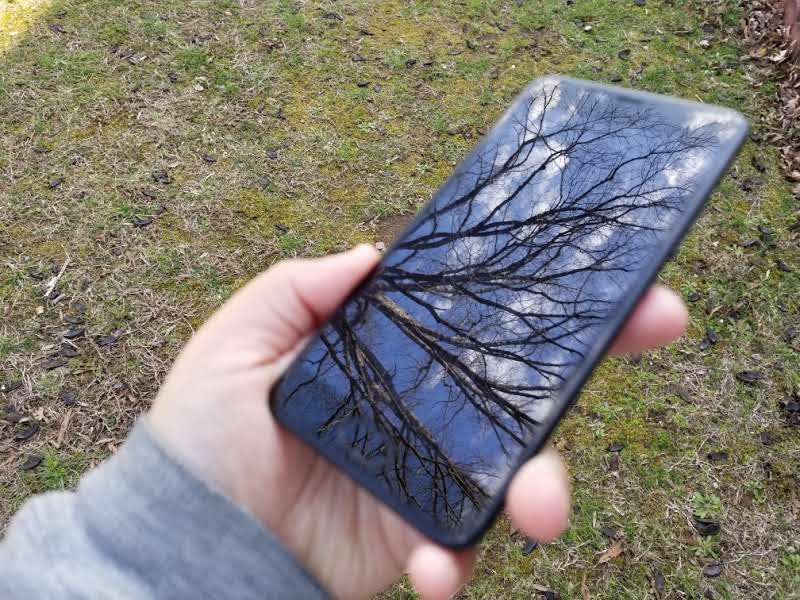 With all that’s been said, the BLU S1 is a competitive, budget-friendly Android-powered smartphone. However, I would like to offer up some pros and cons so that Blu might create an ever better experience for the next generation.

BLU has an excellent smartphone in the BLU S1, and perhaps the “S” will stand for “stellar” after another iteration or two. BLU needs to fix a few essentials and perhaps even bump up the future S2’s price to accommodate fast charging and USB Type-C charging, and the BLU S series will be hard to beat.