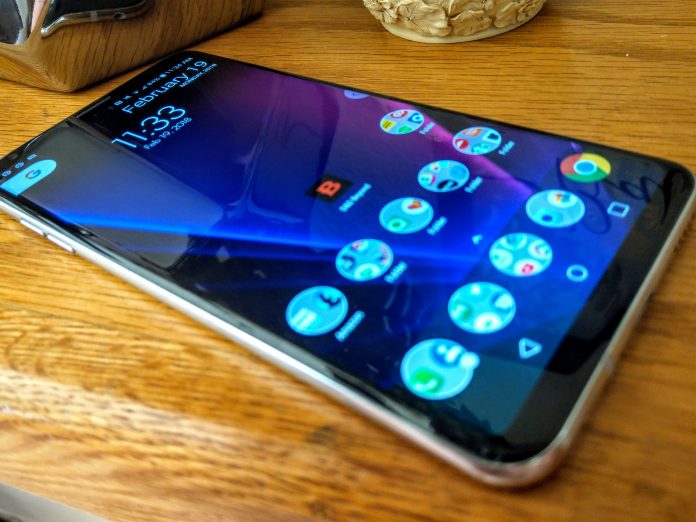 With Mobile World Congress 2018 in the rear view mirror, it’s time to start looking ahead to new flagships. It’s the season of bigger and better. Now’s the time of year when that phone you’ve been eyeballing is set to get a price drop. It’s when the early adopters watch big name companies trot out their best drool with anticipation.

For every person who simply must buy the newest phone there are probably ten who don’t care all that much. Indeed, a lot of smartphone users are more content with buying the best deal, not the shiniest object. Often this means getting a phone that’s about to celebrate a six-month or one-year anniversary.

Take, for instance, LG and its V30. Launched in the fall of 2017, it was, and is, one of the strongest phones on the market. On paper, at least. We previously spent some time with a preview unit of the LG V30 back in August and were immediately pleased with it.

Here we are, some months removed and having spent considerably more time with the retail version. Read on for our review of the LG V30. While it certainly qualifies as a flagship device, it has a number of problems.

Let’s start with the obvious. Much fuss has been made about the V30’s display, and how disappointingly it performs in comparison to other flagships. And that criticism is very much warranted.

It struggles in low light and low brightness, has problems rendering gradients and solid colors alike, and blacks that, while deep and rich, also bleed heavily in transition – a far cry from what LG has delivered in the previous V-series models. My review unit was a bit better off than many of the retail models, but the display’s problems are undeniable. 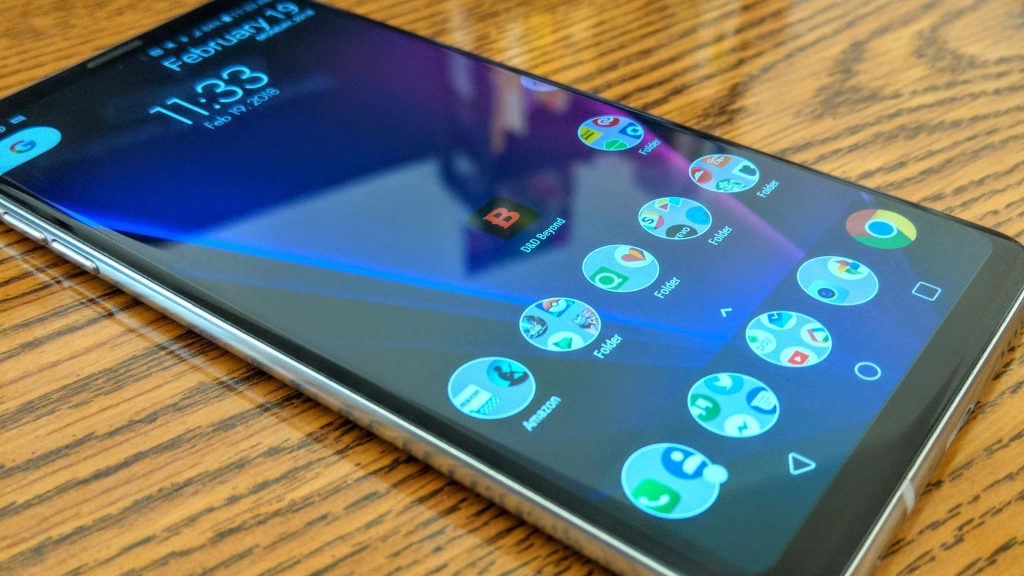 The V30 is without doubt a beautiful phone. That big OLED display dominates its face and drapes elegantly over each side, creating a gorgeous silhouette that’s all curves.

In that aforementioned phone-nerd dreamland we wouldn’t need to cover up that beauty with a case. We’d have an indestructible, impact-proof phone that would never tumble from clumsy fingers; one we could admire for hours without having a panic attack about the all-glass body the guys over at LG decided to use.

Alas, we’re forced to take that lovingly crafted aluminum-and-glass body and wrap it in silicone and carbonate – lest we risk shattering it. Even then, glass – Corning Gorilla Glass 5, no less – is not known for its durability at thin densities. In the proverbial race to make the thinnest phones this glass is indeed quite thin.

Even a Spigen full-body case couldn’t save my poor review unit whose back is hopelessly shattered like a first generation iPhone 5 after its first drop. The sad part is that the damage occurred in the case – and there’s a visible impact mark on the glass.

LG has an entire section on the product page singing the praises of the V30’s build quality. It raves about the phone’s IP68 rating, rightfully so as that’s something that consumers really desire in a modern smartphone. What’s more, its “Military Tested” durability, passing “14 different military-standard durability tests” using the MIL-STD 810G battery.

What LG neglects to mention though, is which tests the LG V30 passed, and which it didn’t. MIL-STD 810G is a Military Testing Standard encompassing 29 different categories, ranging from minor tests like sand and dust to major ones like gunfire and ballistic shock.

LG conveniently doesn’t tell us if the V30 passes the Method 516 (Shock) test, for example, which determines durability from impacts like drops and throws – I suspect, given the phone’s all-glass nature, that it didn’t.

Beyond the glass face and body, the frame of the phone is made of anodized metal in either silver or black. The silver is chromed out and shiny. It’s way too flashy for my personal taste, but gorgeous to some, I’m sure.

LG went with a fingerprint sensor on the back of the phone – a call back to, perhaps, the G-series, which saw buttons in the same place for easy manipulation – and volume buttons on the left side of the frame. Pretty standard. Interestingly, the glass on the rear panel of the phone also appears to cover the Flash and laser focus, resulting in a perfectly smooth back, save for a modest camera bump. 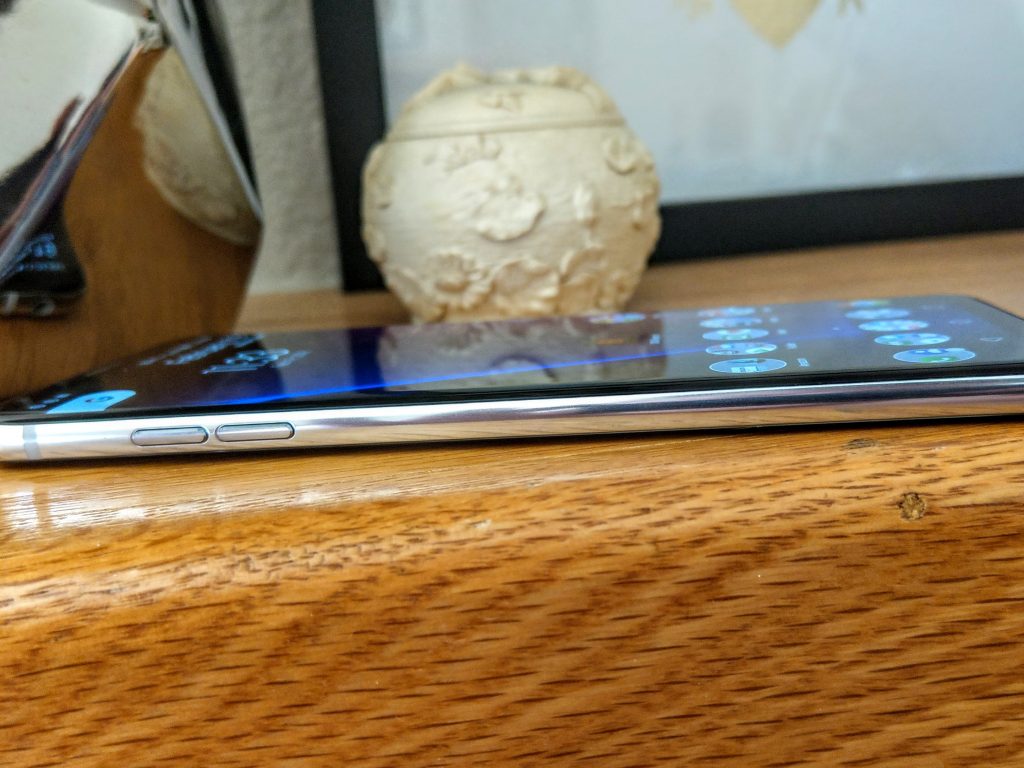 The V30 is a true flagship. From start to finish, its internal components were cutting-edge at the time of release and still stand up today. 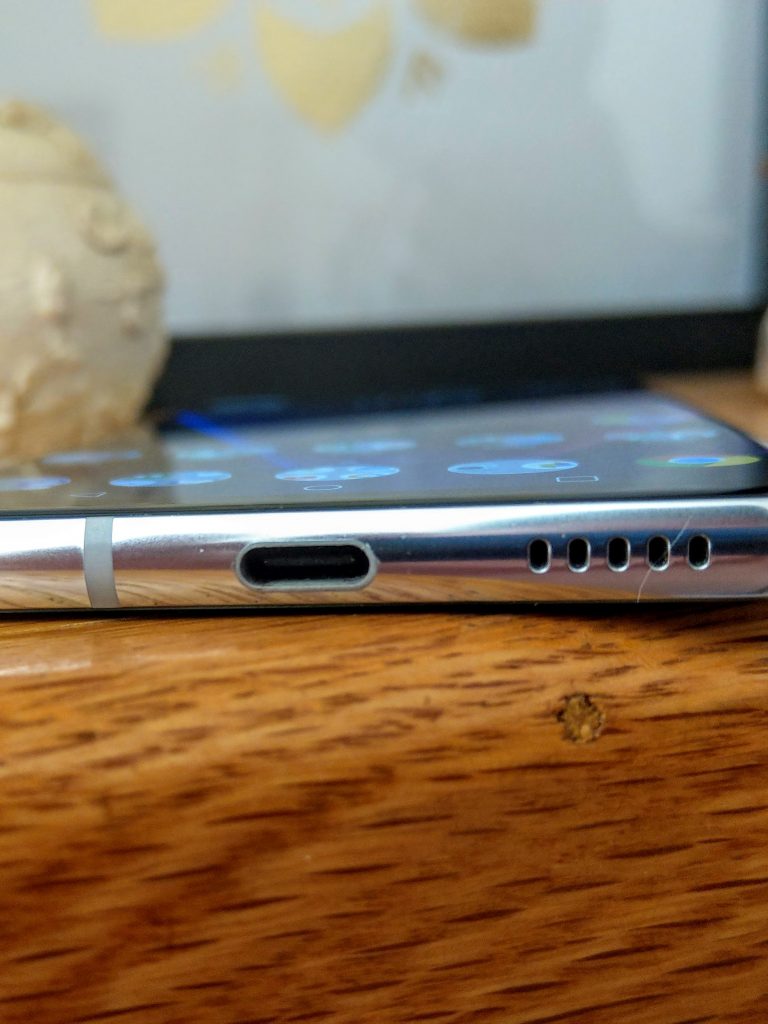 The Snapdragon 835 processor that powers the V30 is the most modern Qualcomm processor currently in a smartphone. We expect to see the Samsung Galaxy S9 feature the brand new Qualcomm Snapdragon 845 chip, but that doesn’t mean the V30 is any less powerful. The processor allows you to fly through tasks.

The V30 also features 4 GB of RAM and 64 GB of storage, the standard for flagships today. While some outliers may feature more, the V30 matches other flagship devices like the Google Pixel XL and Pixel 2 XL, the Samsung Galaxy S8, and the HTC U11. Devices in 2018 may have more RAM or more storage, but for right now, the V30 is well equipped.

The V30 also sports the trifecta of modern specifications: Bluetooth 5, 802.11ac WiFi, and USB-C version 3.1 (with Quick Charge 3.0). The V30 is in the top tier of smartphones on the market in this category. Bluetooth 5 offers better range, faster data speeds, and the bandwidth to connect two devices at the same time.

In terms of battery life, the V30’s 3300 mAh battery is underwhelming but still very much in the realm of the modern flagship. We always want better battery life from our phones and that’s no different from the V30. While I was able to get through a 15 hour day with the phone, battery life could certainly be better. For years, we’ve decried OEMs making their devices slimmer to the detriment of battery life. The V30 is a case study in this very practice. 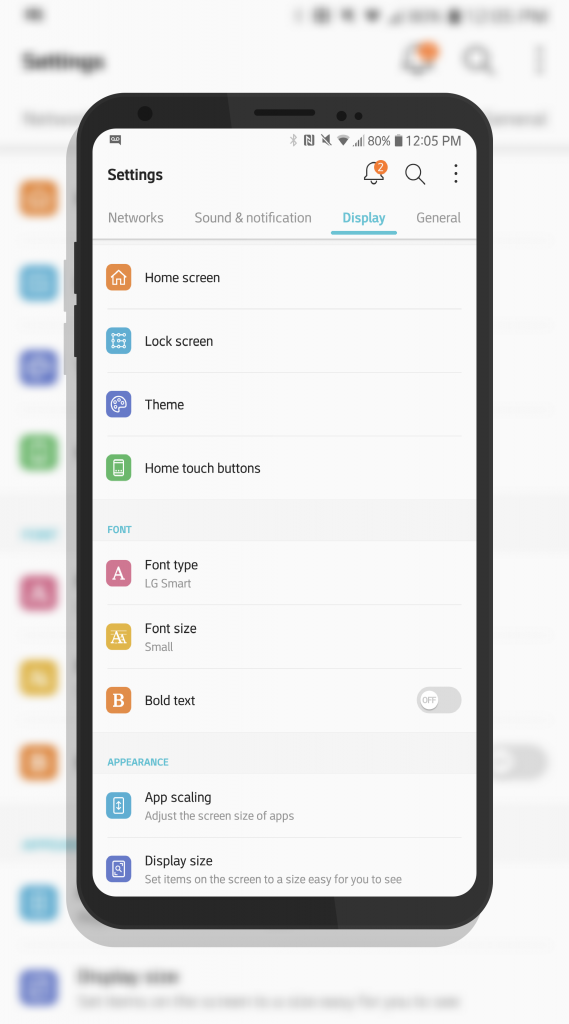 Android can be whatever you want it to be; that’s the beauty of the operating system. As such, I don’t normally talk too very much about the so-called “skins” that OEMs place over their respective phones. After all, what’s the point? If you don’t like it, download a new launcher or new apps.

But LG has really done a lot to deviate from Google’s core Android design, both in terms of adding features and its visual style. The V30 comes stock running Android 7.1.2 – no Oreo update yet, even months after release – and runs a heavily skinned variant that’s virtually unrecognizable as Nougat.

When first setting up the phone, we’re presented with an option of how we’d like our Home Screen set up: Home (with all apps on the screen at once – oddly, the default), Home with Drawer (Android’s standard), and EasyHome (which has limited space on the Home Screen, for use with children or elders). There are a number of themes that can be downloaded for use with the Launcher, though I didn’t find any of them to be particularly engaging.

Floating Bar is a cute little feature that places a shortcut on top of everything on the screen. This allows you to access handy shortcuts like favorite apps, contacts, screenshot manipulation, and music playback control. It’s useful at times, but I also found it to be a bit cumbersome.

It always manages to be in the way at one point or another, much like Facebook’s Chat Heads feature. I haven’t ever found it to be critically useful. You can control music playback by simply pulling down on the notification shade and that’s definitely clever and a bit of value added.

Smart Settings is something that should be integrated into Android’s AOSP, in my opinion. It allows you to customize the settings you want based on four parameters: At Home, Away from home, When earphones are plugged in, and

When Bluetooth is connected. These settings can change your sound profile, Bluetooth, and WiFi based on the aforementioned conditions.

This is especially useful for saving battery by turning off Bluetooth or WiFi when you don’t want it on, or launching your favorite music app when you connect headphones or Bluetooth, automatically. Think of it as a less encompassing version of IFTTT – automating your smartphone, so you don’t have to micromanage it.

It’s certainly not perfect, but it is rather convenient.

This is one of those redundant features I mentioned above. Task Killers haven’t been necessary on Android in many iterations, and that’s exactly what Smart Cleaning is at its core. It kills Idle Tasks and erases Temporary Files in an effort to clear up RAM for your use. But honestly, Android already does a pretty decent job of doing that all by itself. If you’ve managed to bog down the V30’s processor and RAM, it’s probably something you’re doing wrong; not something Smart Cleaning can fix.

I’m torn on Smart Bulletin. It’s a decent idea in that it shows at-a-glance information that’s relevant in your daily life: Smart Settings, LG Health, Calendar, and Music. Unfortunately, the only apps that Smart Bulletin can pull from are LG’s versions of those apps. That means no Google Calendar, Fit, or Music. It’s all very Apple-like. Had LG simply given us the ability to choose whichever apps we wanted, that would have been wonderful. Instead, it limits us to using its own apps and no others.

LG’s V-series phones have always had ambitious cameras. From their software to the hardware backing them, the V-series was dedicated to giving a fantastic camera experience to the masses. And while it hasn’t always succeeded, LG has, at least, made that its goal. Unfortunately, the camera on the V30 is rather underwhelming for a flagship device.

With the Pixel 2, Note 8, iPhone 8/X, and HTC U11 all receiving DxOMark scores above 90 recently the V30’s 82 DxOMark score is rather disappointing. More than just a number though, the pictures the V30 takes are underwhelming as well. To clarify, they aren’t terrible. You’d be hard-pressed to find a modern smartphone that takes terrible photos, but in a world of amazing smartphone cameras, this isn’t one of them. The V30 has a number of modes to modify your pictures – some of them useful, others not so much.

At somewhere between $650 and $800, the V30 falls squarely in the premium price tier. While I personally am a fan of budget flagships – why pay more for a high-end brand name? Most consumers that like to buy Samsung, LG or HTC will find this price point to be acceptable. The V30’s processor and RAM will hold up for a long time, relatively speaking. The camera performs well, its storage (and the potential for a 2TB MicroSD card) is more than adequate, and its connectivity standards are more-or-less future proof out to two years. As such, the $700 price point is pretty bearable, assuming you’re in the market for a high-end, big-name flagship.

Buy the LG V30 from your carrier of choice:

Or, you prefer to get it unlocked – and for cheaper, I may add – get it from Amazon:

BLU's latest, the G91 PRO checks all the boxes for the important features in handsets for a wide range of consumers. Read our review.