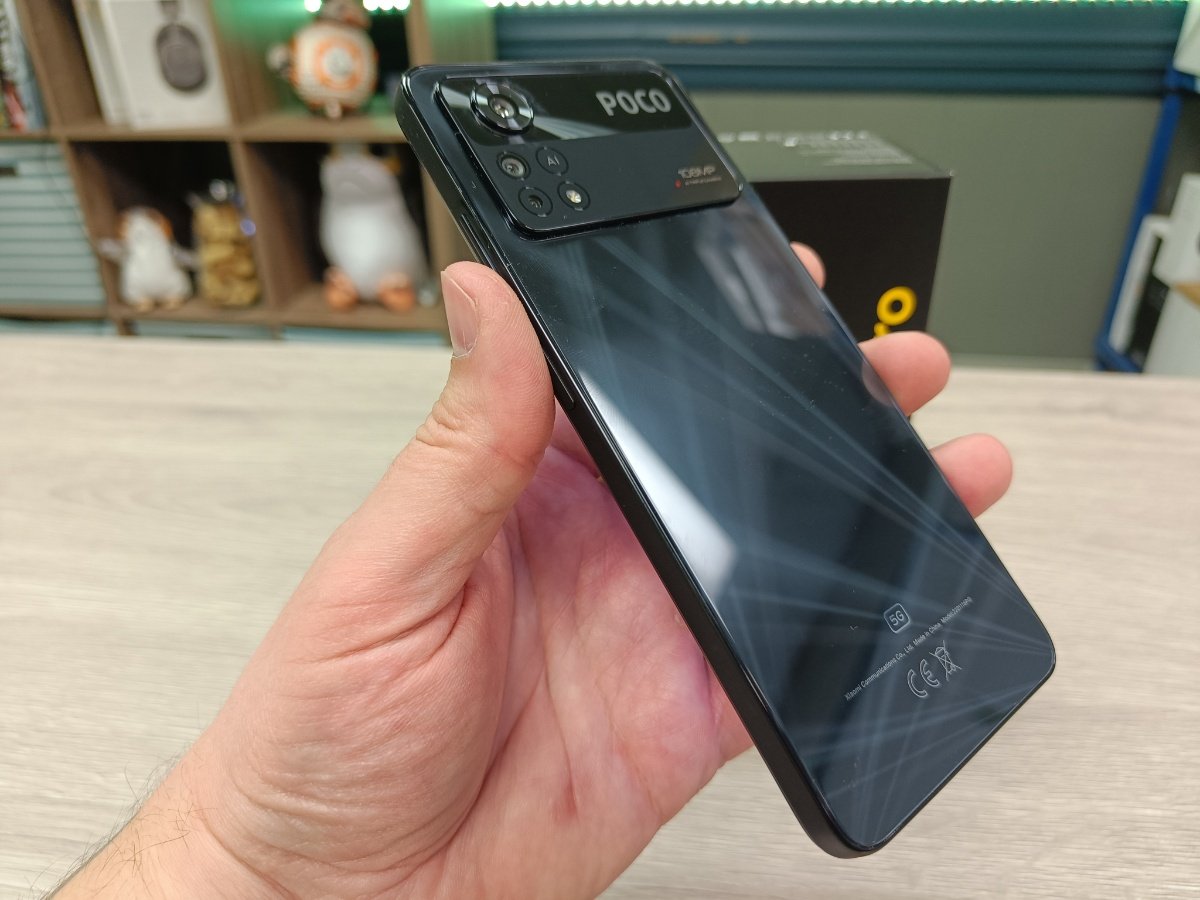 The smartphone mid-range is a crowded space with no signs of slowing. Whether you’re talking about the United States or the global market as a whole, there is a seemingly endless stream of new and interesting handsets.

POCO, a sub-brand of Xiaomi, is one of those brands which continuously pump out new models with intriguing designs and packages. The X4 Pro 5G, which comes in as low as $330 USD, offers up a fairly robust set of hardware for the money.

The POCOX4 Pro 5G checks a number of boxes for “important” features for a lot of consumer needs. That is to say it has a big screen, generous battery capacity with fast charging, 5G support, and a multiple camera system.

The specifications put it firmly in the middle of the smartphone pack but its price comes in considerably lower than the typical competition. How does it fare? I’ve spent a few weeks using one of these in tandem with a few other models and have some feedback and impressions to share.

The X4 Pro 5G has the look and feel of a more expensive “premium” phone with its slim bezels, flat edges, refractive finish, and thin profile. While it is made from plastic with aluminum framing, it’s more stylish than it sounds on paper. Light moves nicely across the rear it catches the eye, especially in sunlight.

It feels great in the hand; when many phones feel curved and tapered, this one comes across as more crisp and sharp. It’s a nice departure from some of the models I’ve used over the last few years.

Available in three colors (Laser Black, Laser Blue, and POCOYellow), my review unit is technically black but skews more grey and steel. The refraction effect calls to mind spotlights shining in the night sky. I cannot speak of the other colors but this one picks up fingerprints easily but cleans up without fuss.

The IP53 rating protects it against dust and water but it’s not a fully waterproof experience. You may be alright if caught in a sprinkle or splash but you’ll want to keep it away from pools just to be safe.

Pretty much every phone maker has its own take on the multi-camera array and the POCO X4 Pro 5G is no exception. Here, the module takes up a fair amount of space across the top quarter. The main camera is 108-megapixels with 8-megapixel ultra-wide and 2-megapixel macro complimenting the shooter.

The 6.67-inch display looks stunning with its incredibly high brightness and 120Hz refresh rate. The 1080 x 2400 pixel resolution and 20:9 aspect ratio make for a comfortable reading and video experience.

The side-mounted fingerprint reader doubles as the power button. The more I find this with phone makers, the more I come to enjoy it. While I can set my devices to wake on pickup or tapping, more often I push the power button.

I was pleasantly surprised to find the POCO X4 Pro 5G features a 3.5mm headphone jack. Located on the top, I like having one of these available even in 2022.

In terms of power, the X4 Pro 5G comes with a Qualcomm Snapdragon 695 5G processor with at least 6GB RAM and 128GB storage. An 8GB/256GB variant is also offered should one want to bump things up a smidge.

These are mid-range specs for handsets today but they’re certainly far more than what your typical user might need. If you’re considering this model, I suggest opting for the 8GB/256GB edition just for the extra peace of mind and longevity.

The 5,000mAh battery is good for around two days of typical usage. If you charge up your devices while you sleep, you’ll rarely run into a situation where the battery dips to yellow or red ranges.

The POCO X4 Pro 5G supports up to 67W fast charging but it does not allow for wireless charging. This wasn’t much of a concern for me as I have been long accustomed to plugging in once a day with the random top-up in the car.

For what it’s worth, my review unit came with the 67W brick but it’s not compatible with US outlets. I’ve found that a half hour on the charger is all it takes to get the battery from nearly dead to around 75% full. I cannot imagine myself needing more than a commute’s worth of time being plugged in.

Android 11 runs the show but it’s dressed up with MIUI 13 for POCO. This more or less means it sprinkles in extra customizations and capabilities but doesn’t change the appearance all that much from the “stock” Android experience.

Coming from the Pixel line, I appreciate when a phone maker gives me the ability to make the UI feel uniquely mine. There’s plenty on offer here including live wallpapers, themes, lock screen settings, text colors, and more. If you like to tinker without installing extra apps, you’ll dig this stuff.

Things can get a little quirky or feel somewhat out of order, but that’s something I’ve seen in other Chinese phone makers, too.

Having only spent short amounts of time with review units I cannot speak on how well the brand does with software updates. The phones I’ve tested come with current software builds and patches but I don’t think the manufacturer will make any hard commitments on upgrades.

Similar to what we find with US-based BLU, I think there’s a trade-off or unspoken understanding that you get more hardware for your money and take your chances with the long-term software.

The POCO X4 Pro 5G is an impressive little bundle, delivering on my expectations across the board. I’m not the kind of user to push phones to their limits; I don’t play high-end or graphic intensive games. With that said, the titles I do dabble in performed just fine.

Obviously one doesn’t typically see any speed issues or lag in a new device with this much hardware, at least in the first few weeks. Over time I added new apps and games, slowly introducing accounts and dialing up the demands. I’ve yet to run into anything that signals a weak spot in the area of general performance.

The battery life has been great, often getting me two days at a clip. I’ve become more comfortable with not plugging my phones in over night and the X4 Pro 5G hasn’t changed my habit. I can plug in while having my coffee or breakfast and feel confident that I’ll be just fine over the rest of the day.

There’s no wireless charging here but that’s a non-starter for me. While I own a number of wireless chargers, power banks, and docks, I rarely turn to them. I’m happy to swap out wireless charging for incredibly fast charging. At 67W, I get more than 50% worth of battery in just 15 minutes.

I found the primary camera captures quite detailed images with a nice balanced exposure. Colors are accurate and often do not require any post processing before sharing to social media.

Low-light scenarios can be a little irksome for the phone and night shots are hit and miss. I don’t take many pictures after sunset but on the occasion that I would, the POCO X4 Pro 5G would be a bit of a gamble.

The ultra-wide and macro lenses are passable, but I’m a little more demanding than my friends and family. Whereas I would sometimes scowl at a photo I had acquaintances who would have no issue sharing the pic online. I’ve certainly seen much worse on social media but I do think the camera experience is generally average. Don’t buy the POCO X4 Pro 5G because the 108-megapixel camera sounds top-tier.

Given the $330 price tag for the 6GB/128GB model, I’m more than happy to recommend the phone for consumers. It’s all of the things that I need in a device and I suspect all your typical user might need, too. It just happens to be priced lower than the competition.

In a time when the Pixel line looks to have completely removed the headphone jack, I’m happy to see it’s present here. I also like the inclusion of NFC, an IR blaster, and the fingerprint reader in the side-mounted power button.

Coupled with a fully customizable UI experience, the POCO X4 Pro 5G feels like something a little different, and dare I say, welcome.

I wish the camera system were a bit better but I’m willing to admit that I’m being a tad critical. The average user may take no issue with what’s at play.

Also, given that the phone is an unlocked global handset, the 5G support may not be true to what you’re currently getting from the US carriers. If you’re content with 4G LTE, or spend most of your time on Wi-Fi, you should be good to go.

Lastly, you may want to consider picking up a new charger with support for up to 67W because the one that comes in the box is not compatible with US power outlets.

I’ve become increasingly interested in lesser known phone makers in the US and am happy to consider alternatives to the bigger names. POCO has intrigued me thus far with some of its models and I look forward to more.

POCO announced the X4 Pro and M4 Pro at MWC