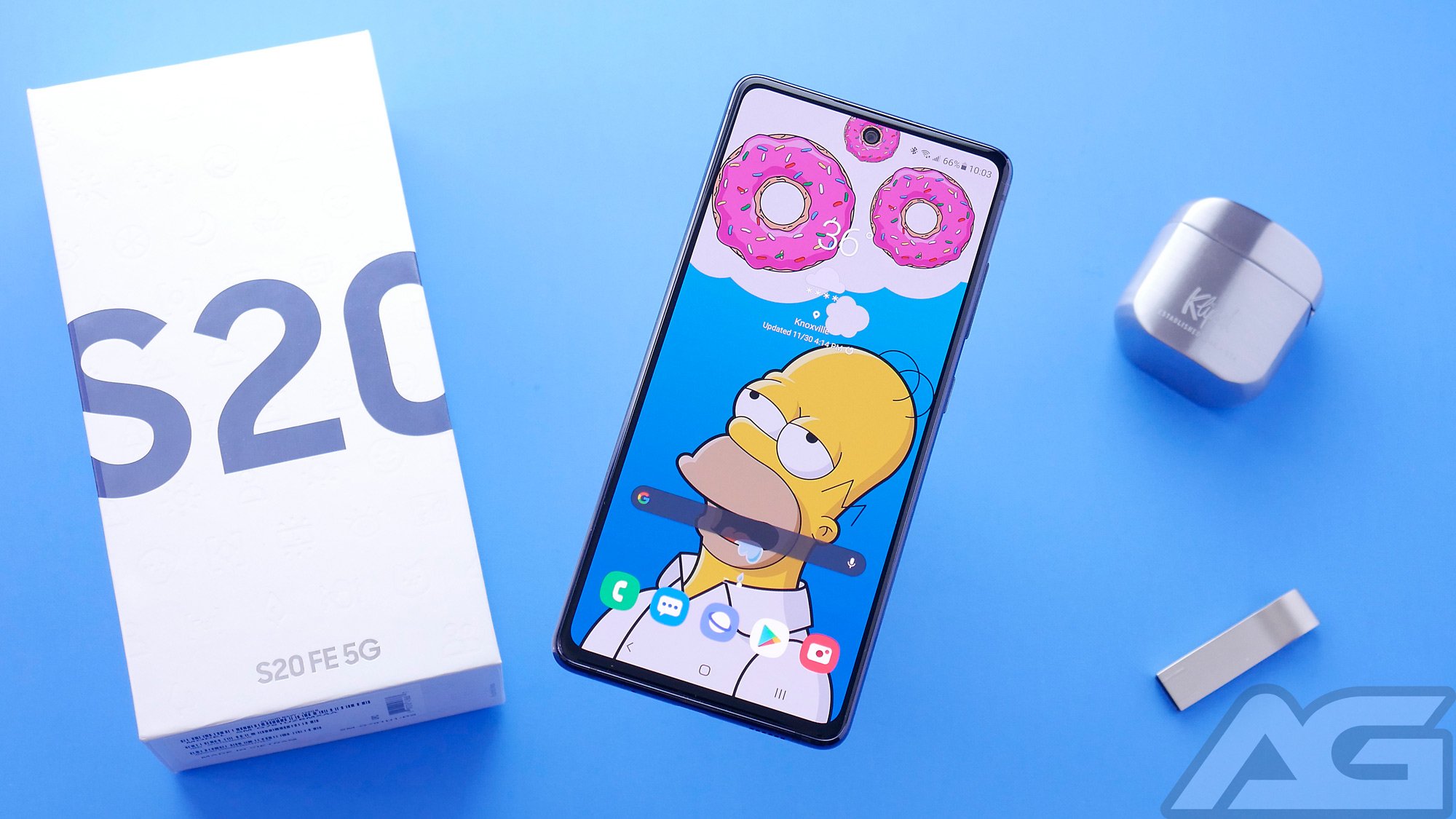 The Samsung Galaxy S20 is billed as the flagship phone experience for 2020, but if we’re being honest with ourselves, it’s likely “too much” phone for most people. The Galaxy S20 Fan Edition (FE), arrived a few months after the standard bearer, bringing about most of the S20’s top features, but with a price that’s a few hundred bucks cheaper.

How does the Galaxy S20 FE fare? Is it worth spending the extra money to pick up those extra features or does this work for typical users? Read on to see what I thought of the Samsung Galaxy S20 FE.

The Galaxy S20 FE is Samsung’s budget flagship device for 2020, and as such, some corners have been cut. The most noticeable of these has to do with the design of the phone.

For starters, the back is plastic, and this is undoubtedly the thing most people will notice when looking at the S20 FE. While I’ve always found metal and glass backs add to the premium feel of a smartphone, I’ve also never been one to look down on a smartphone for using plastic when it makes sense. 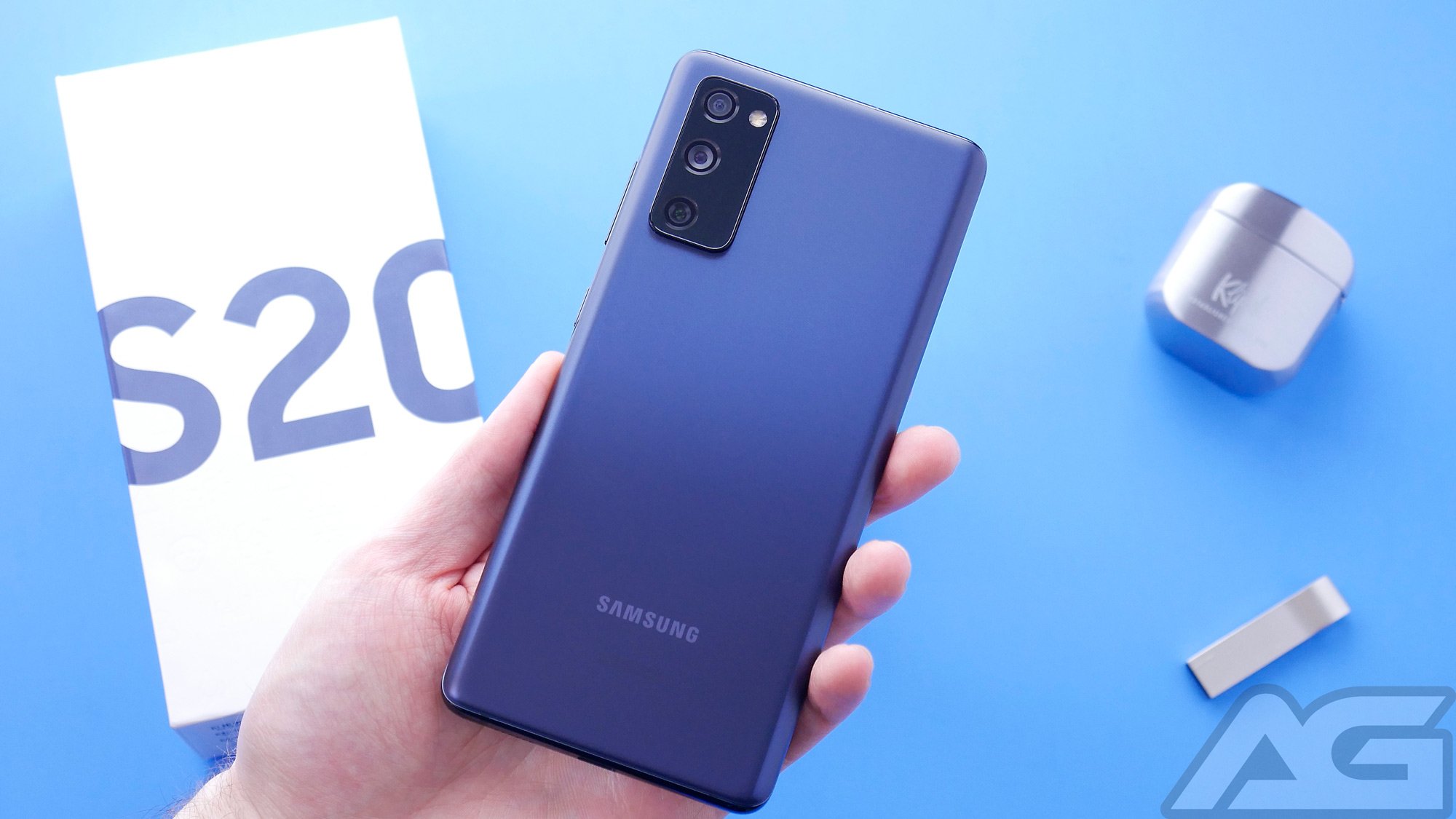 In this case, plastic makes perfect sense for the Galaxy S20 FE. It’s lightweight, durable, won’t show scratches, allows for good signal strength, works with wireless charging, and it helps keep the cost down. Plus, the S20 FE is still IP68 water-resistant so you’re not giving up much at all. The only real downside is the lack of “premium feel”, and that’s something I can live with at this price point. If you’re like me you’re going to put a case on it anyway.

While the back is plastic, Samsung did use a metal frame and that still provides the S20 FE with a superior feel you wouldn’t get from a full plastic build.

Around the top of the device, you’ll find the nano-SIM slot that also includes a cutout for a microSD card allowing you to expand the storage on the S20 FE. The bottom houses your main speaker supplemented by the earpiece speaker that produces clear loud audio for streaming videos or playing games.

No Headphone Jack or Dongle

Finally, the only port on the phone is the USB-C port at the bottom. Unfortunately, you won’t find a headphone jack on the S20 FE. As a massive fan of headphones, I’m still salty over the removal of the headphone jack, and will forever hate Apple for making this the standard.

Even worse, the Galaxy S20 FE doesn’t include a dongle, something I found out on the first night when I wanted to plug in my favorite pair of IEMs and listen to some music. Instead, I had to wait a couple of days for Amazon to deliver a USB-C to 3.5mm adapter before I could do this. The two other headphone dongles in my possession wouldn’t work with the S20 FE because they lacked an audio processor. 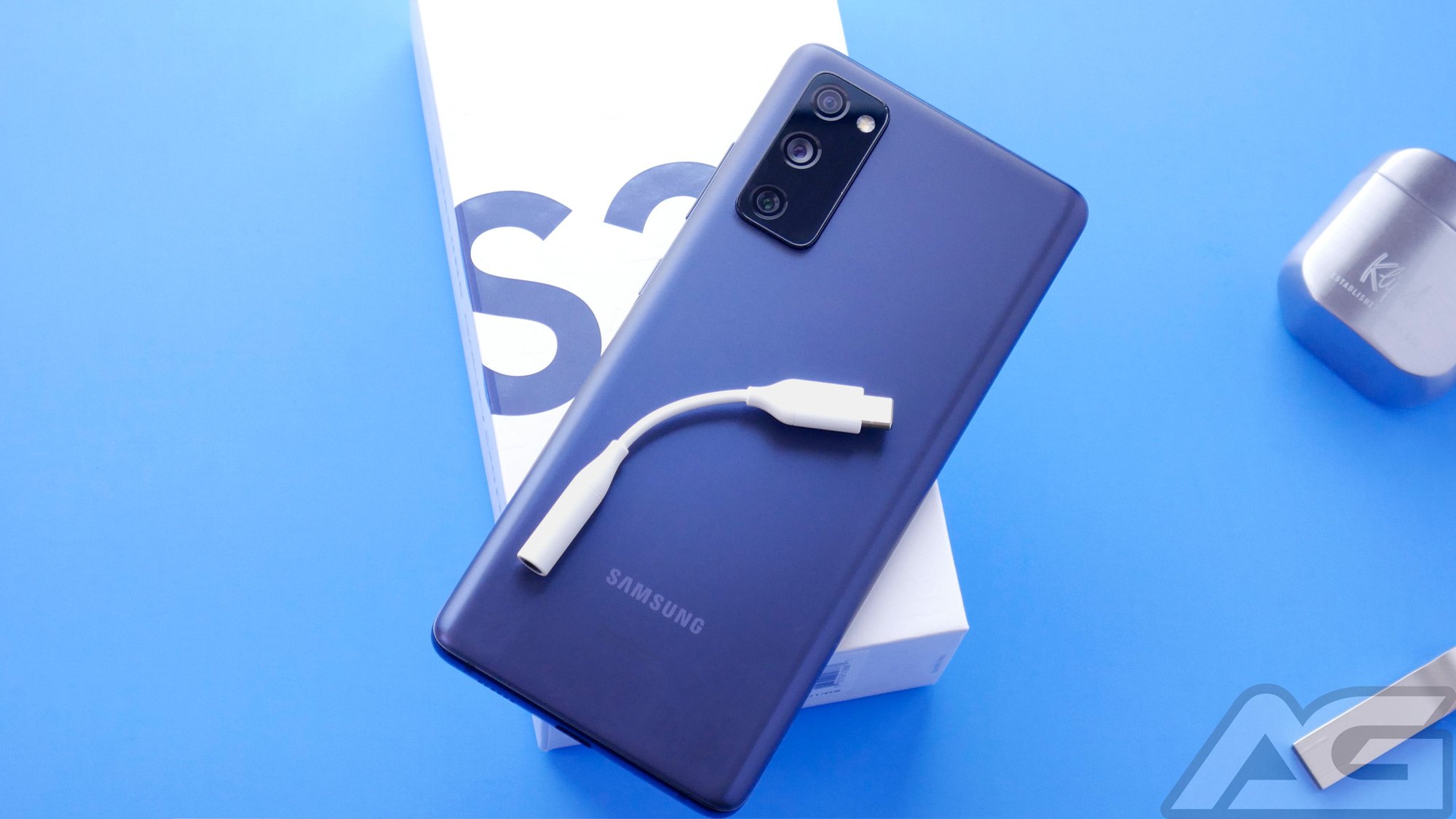 Just another reason I am still salty about the removal of the headphone jack. If you’re looking for a compatible headphone dongle for the Galaxy S20 FE, then I recommend the official one I ordered from Amazon linked here. It has worked perfectly for me.

One reason I’ve always gravitated towards Samsung phones is the incredible displays. The S20 FE is no exception here, sure the bezels are larger, it’s not curved, and the display is only FHD+ instead of QHD, but it looks stunning.

The display gets extremely bright, the blacks are inky, and the colors are vibrant–everything you’ve come to expect from a quality AMOLED panel from Samsung. Videos and games looked fantastic, and the 120Hz refresh rate made everything buttery smooth. 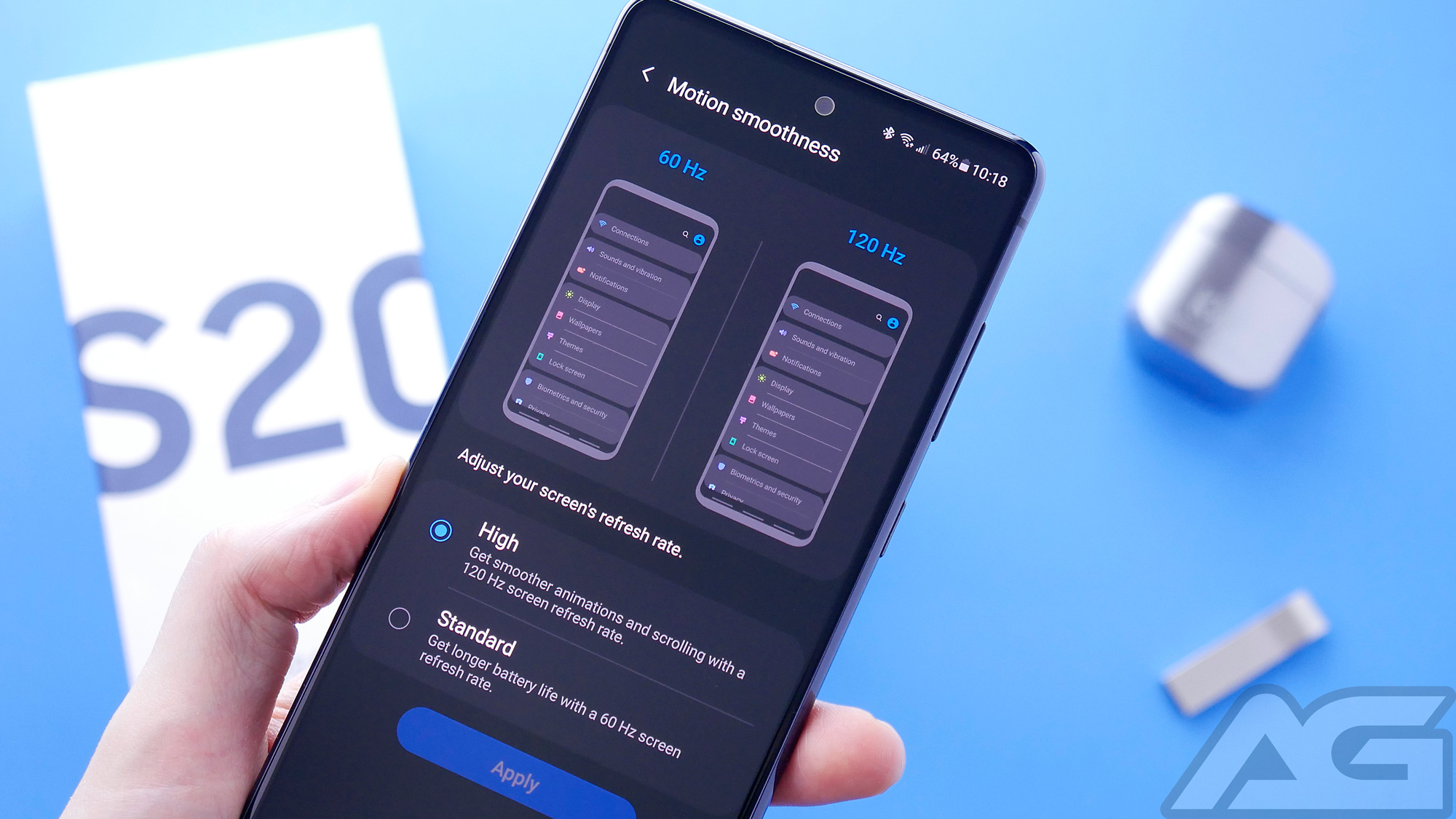 There’s something about scrolling and watching animations in 120Hz which makes the phone feel so much more responsive. Plus, for years I’ve been irked by the black smear you’d see when scrolling on AMOLED panels. The high refresh rate makes this nearly unnoticeable.

My only real complaints was the lack of curved edges, lack of HDR support, and the larger bezels around the edge. I know many people will see the flat display as a pro, but I’ve never had any issues with the curved displays on Samsung’s phones and I’ve always preferred that aesthetic. It also went a long way towards making the bezels seem slimmer, and the S20 FE could have used some help in that department.

As far as HDR support goes, the Netflix app shows the S20 FE doesn’t support HDR. YouTube and Prime Video both supposedly support it, but when compared to other phones I have that support HDR playback, the S20 FE looks muted.

Don’t get me wrong, the display still looks beautiful when playing videos, but HDR would make it look all that much better.

Naturally, I can’t mention the display without referencing what’s underneath it, and that’s the fingerprint sensor. This is one other area Samsung saved some money by using an optical sensor instead of an ultrasonic one. Optical sensors have come a long way and are much quicker than they used to be, however, they are generally less secure than ultrasonic sensors. Despite being less secure, optical scanners are some of the most widely used fingerprint sensors in phones these days, so I find it to be an acceptable cost-cutting measure on the S20 FE.

Samsung’s software has had its fans and critics over the years. However, most seem to agree that One UI has matured into a well thought out and designed skin. It puts an emphasis on one-handed use and positioning elements within reach for an enhanced user experience.

Furthermore, Samsung tosses in tons of extra features and settings that help you personalize your phone. There are themes, custom always-on display graphics, a one-handed mode, double-tap to wake, dual messenger, and the list goes on and on.

Some might say this makes Samsung’s software bloated, and they wouldn’t be wrong. There are many features here that I never touch and I don’t care for, Bixby anyone? Regardless, I love the extra features and flexibility One UI provides me. The Samsung Galaxy S20 FE camera setup consists of a 12MP f/1.8 wide camera, an 8MP f/2.4 3x telephoto camera, and a 12MP f/2.2 ultrawide camera with a 123-degree view. This selection of focal lengths is perfect for almost any occasion. The 3x telephoto gives just enough reach to justify its existence, while the ultrawide and wide camera ensure you can capture everything in the frame that your eye sees and more.

I’d describe photos taken by the S20 FE as overly bright and sharp. They don’t look bad by any means, but you can tell Samsung’s processing has been tweaked to make photos look super bright and crispy because that’s what most people tend to gravitate towards in camera shootouts.

Personally, I would have preferred the processing to be a bit more subtle, because you lose some shadows that can really add a nice mood to your photos or give a sense of dynamic range. Plus, it doesn’t match what I’m seeing with my eyes in the scene.

In the end, the S20 FE still produces good photos, even in low-light situations. Furthermore, there is optical image stabilization on the wide and telephoto lenses, and you get plenty of shooting modes and options to choose from, including pro, panorama, live focus, super slow-mo, and night mode.

Speaking of night mode, the S20 FE does an impressive job of retaining detail and balancing the exposure in extreme night scenes. For example, it’s able to balance the exposure between the Christmas lights here, the night sky, and a mix of outdoor and indoor lighting. That’s a big challenge and one it was able to pass with flying colors. 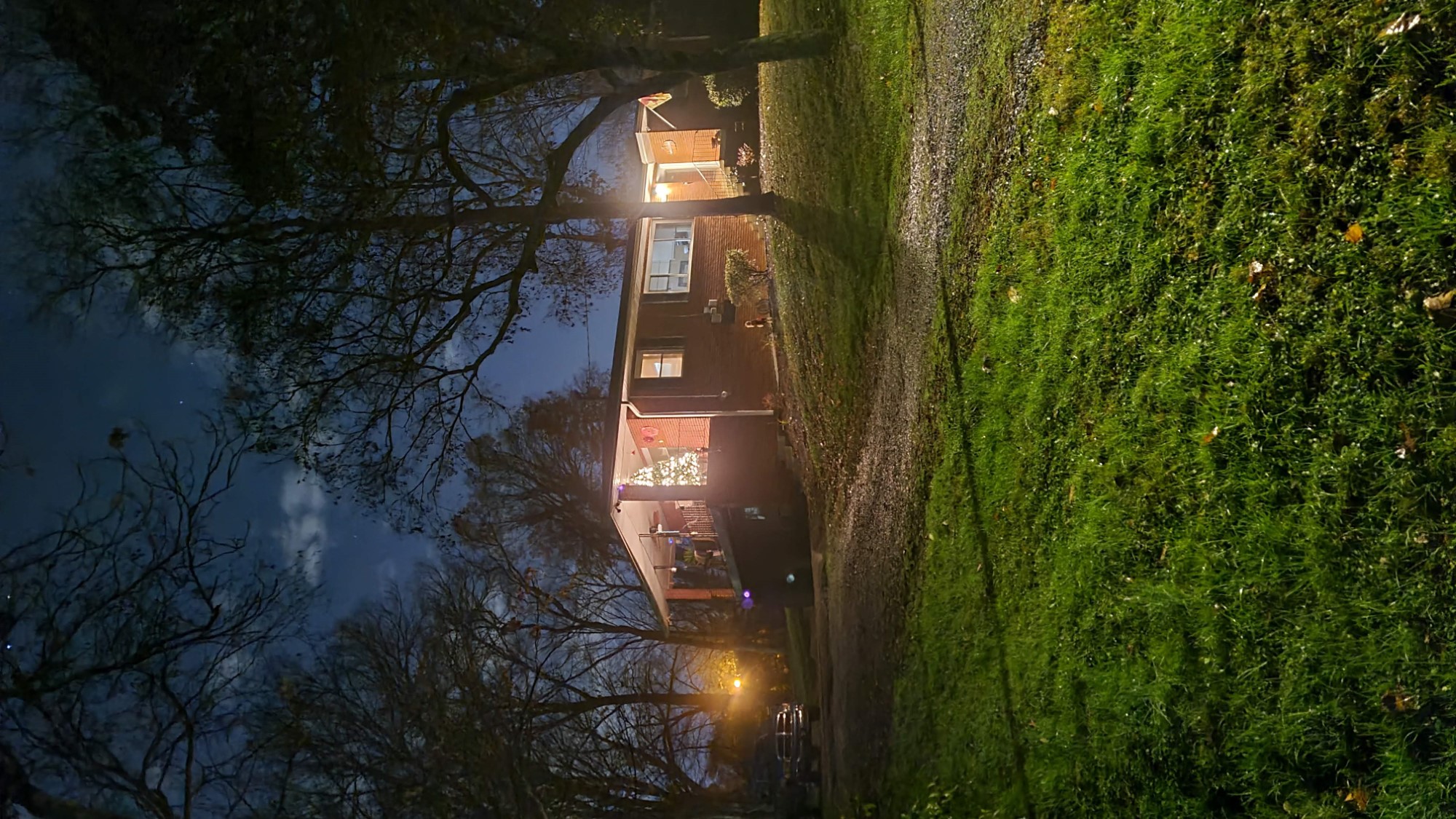 The front-facing camera is a 32MP f/2.2 shooter that uses pixel binning. That means, it’s technically capable of taking photos at 32MP, but unless you specifically choose that option, your photos will be at 6.5MP or 10MP if you choose the wide-angle option. Also, if you decide to shoot at 32MP you’re going to lose the ability to capture in HDR. In my opinion, the extra resolution isn’t worth the extra storage space or losing HDR.

Overall, I was disappointed in the front-facing camera. It suffers mostly from Samsung’s processing which applies face smoothing and brightness, even if you disable it. This has been an issue with Samsung selfie cameras for years now. You can often get around it by using the Google Camera app, and then you see just how much more detail the camera is capable of capturing.

Samsung may have cheaped out on the plastic back, but if that allowed it to include the Snapdragon 865 then I’m all for it. Granted, it’s only using 6GB of RAM and I know that sounds bad considering flagships these days are running 8GB of RAM.

However, I haven’t noticed the lack of that 2GB of RAM to be that limiting while using the S20 FE, but I have noticed how blazing fast it feels with Qualcomm’s latest processor and the 120Hz display.

In other words, Samsung cut corners in all the right places and made a phone that is capable of speeding through most tasks, including loading up large mobile games. The only downside is that it will drop some larger apps from memory more quickly than phones with 8GB and you’ll have to wait for them to reload. With such a large 120Hz display on the Galaxy S20 FE, I was concerned about the battery life. After using it for the past few weeks, those concerns were completely unfounded. I was ending the day with the battery around half full, and that was with a mix of gaming, browsing Reddit, and streaming videos.

That all added up to a combined four hours of screen time most days, and still the battery never dipped below 40%. I was even able to make it last two days without a charge with moderate usage. 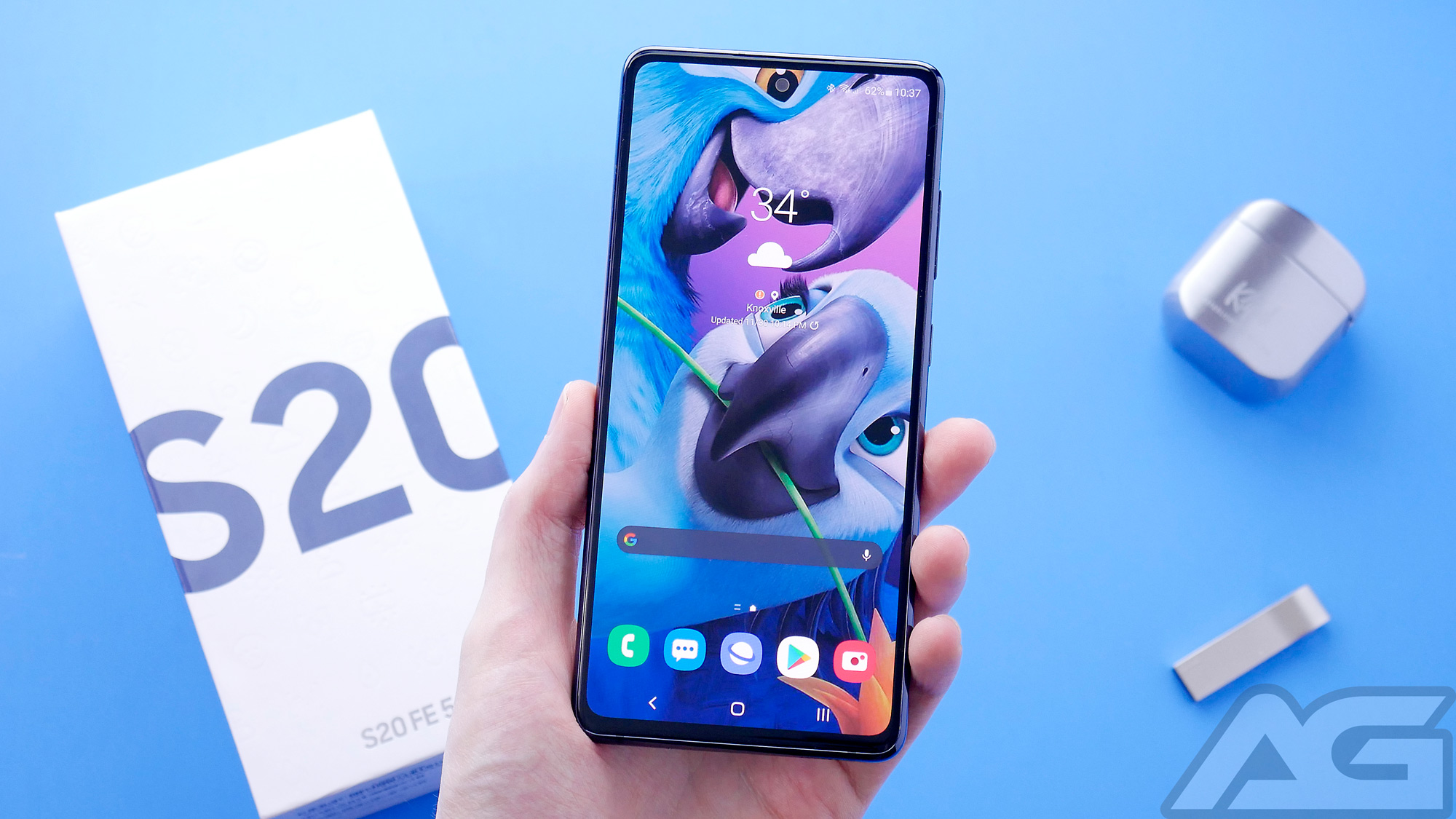 The Galaxy S20 FE is much more than a Fan Edition, it’s the phone that Samsung needed for 2020. The prices of the flagship phones has grown out of control, combine that with a worldwide pandemic, and it was clear something needed to be done. Fortunately, Samsung cut corners in all the right places to deliver a phone with flagship performance for a reasonable price.

For $700 or less with trade-in, you get a stunning display, top-notch performance, fantastic battery life, and a great set of cameras. Pretty much everything you’d expect from a high-end phone in 2020, with only a few drawbacks like thicker bezels or a plastic back.

Buy from Amazon Buy from Samsung