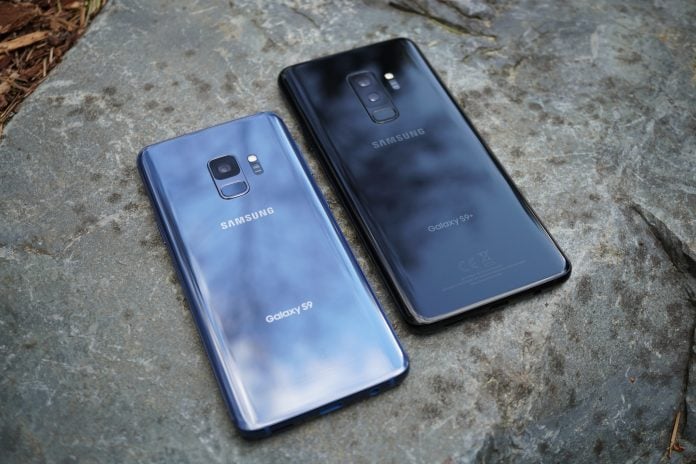 Last year’s Galaxy S8 and S8+ were excellent but not flawless smartphones. Samsung had molded probably the best-rounded devices, with unrivaled display tech, blazing fast camera performance, and a feature-packed design. However, a couple distinct things were hard to overlook, most notably the terrible fingerprint scanner placement.

The new Galaxy S9 and S9 Plus come out as refreshes to address those imperfections more-so than introduce something new, apparent from their highly recycled designs. There’s more than meets the eye, but it’s a subtle fact. We’ll go over what you can expect.

Most onlookers won’t tell a difference between a Galaxy S8 and S9. The most obvious differentiation is the change in fingerprint scanner placement. But it’s not exactly the same phone; tweaks are actually aplenty.

For instance, the metal frame is now matte instead of glossy. It’s a visual improvement (to our eyes) but in actuality, of little consequence usability. The finish is very smooth and still slippery. Coupled with the limited grip area due to the curved sides, this still is far from the easiest phone to hang onto. But it’s one of the prettiest, that’s for sure.

We noticed quite a bit of heft when picking up the S9 Plus the first time. A spec sheet comparison confirmed that it packed on 16 grams from the S8 Plus. Some of that is probably due to the extra camera sensor on the larger model (the standard S9 is only 8 grams heavier). Digging deeper reveals that the Gorilla Glass 5 panels on the phones are 20% thicker. Samsung probably sought to improve drop impact resistance.

Read more: What are some of the best Samsung Galaxy S9 alternatives?

Additionally, the upgraded main camera module (which we’ll talk in-depth about later) seems to also have a thickness consequence. A camera hump is reintroduced (although, very slight). Mind you, the rear sensors retain their recessed protection.

As touched on earlier, the fingerprint scanner can now be reasonably utilized, at an easily reachable location underneath the rear camera. It’s a little too low on the smaller S9 model, but nothing hard to adapt to. Another particularity is the unconventional shape of the scanner. It’s horizontally narrow, resulting in you registering more of your fingertip than an entire finger. But it doesn’t hinder functionality and is quick and reliable. It’s also nice to have the alternate options of IRIS retinal scanning or a combo of IRIS and facial recognition (looking at you, Apple).

We love Samsung’s maximized but un-notched screen-to-body ratio. The front of the S8 and S9 look the same, so many won’t know that Samsung actually reduced the bezel slightly. The bottom bezel lost roughly 2mm of width. Another fun fact is that the phones are about 1mm shorter. Very small improvements, but we’ll take them.

Suffice to say, the Galaxy S9’s actions are speedy throughout. Executions and scrolling are all silky smooth and carried out briskly. The common Samsung UI stutter shows up occasionally, but as it’s minimal as it has ever been. You really have to pay attention to catch it. Google, naturally, still technically takes the cake for seamlessness in the software with its Pixel phones.

That said, the Snapdragon 845 doesn’t feel like a drastic step-up from the 835. We’re getting very minimal performance gains now. And the extra 2GB of RAM on the S9 Plus (4GB on the S9 vs. 6GB on the S9 Plus) is of little consequence. We wouldn’t know it if we weren’t told.

Battery life is additionally a similar experience as last year, which is unfortunate. Not that the S8’s battery life was bad. It’s just that since the Note 7 disaster, Samsung has stopped progressing in this area. We think the S9 was the time for the company to move past the mishap, but they didn’t agree. The S9 and S9 Plus have the same capacities as their predecessors, 3,000mAh and 3,500mAh, respectively. And the Snapdragon 845 didn’t bring as big of battery optimizations that the 835 did, so battery life results have been about the same in our experience. The S9 Plus has been consistent in getting us through the day with moderate-to-high usage, but not much more. The S9 trails slightly behind the S9 Plus. It shouldn’t be a struggle to get through the day, you just have to be mindful.

One of the big upgrades this year is the additional external speaker. The earpiece now doubles as a loudspeaker, in tandem with the bottom-firing one that we’re used to. And boy, we forget how much of a difference a speaker pointed towards the user makes. It’s not the superior, dual front-facing setup, but it makes a world of difference compared to the previous single, bottom speaker. It makes for a more rounded, immersive and louder video watching experience, especially with Dolby Atmos enabled.

Little has been updated in the S-AMOLED display tech from last year. Proportions like the screens sizes (5.8″ and 6.2″, at an 18.5:9 aspect ratio) and QHD+ resolution (but still set to FHD out of the box) stay the same. And we see an equivalently crisp picture, vibrant but accurate colors, and unfazed viewing angles. This is fine; the display quality is perfect in our eyes. Samsung still is the clear king of smartphone displays.

But we can’t forget about brightness – a tricky subject in mobile displays. In the Note 8, we saw Samsung make a big upgrade in the brightness capacity of its panel, able to shoot up to a whopping 1,200 nits. This feature naturally migrated to the new Galaxy S9’s, though, at a slightly lower 1,130 nits. Close enough. This display can tackle sunlight like no other.

The feel of curved display on the sides remains the same to us, even though Samsung stated that the Galaxy S9 and S9 Plus has a slightly steeper curve than their predecessors. There will always be the argument of practically, which we side with. Palm rejection is in place to combat inadvertent touch in handling, but accidentally input is still abound in our experience, especially when trying to get away with only using one hand (even in the smaller model).

We all know that the camera upgrade is the highlight of the Galaxy S9 refresh. Namely, the neat mechanically variable aperture ability of the primary module – a first in a smartphone. But Samsung set itself up for consumers asking, “How does that benefit me?” More specifically, our immediate question was: Why would you want to shoot at f/2.4 instead of f/1.5 at all? The camera defaults to f/2.4 after all (automatically switching to the wider f/1.5 lens opening only when ambient light drops to 100 lux or lower), so there better be a good reason.

There isn’t. The only difference in f/2.4 from f/1.5 is a slightly deeper depth of field (larger area of sharpness than blur). This is neither an advantage or disadvantage, just a preference. But the opposite does have a clear benefit because f/1.5 can let in a whole lot more light than f/2.4. Hence, we’re left questioning why isn’t the camera just set to f/1.5 for everything. The real answer is probably that the feature is paving the way to the future, but not yet of any use. We can’t imagine Samsung admitting this, though.

As far as the quality of shots, we see similar characteristics as last year: slightly warm, bright (sometimes too much), fine sharpness, and excellent contrast (great HDR processing for the most part).

However, we noticed at times that f/2.4 shots look slightly over-exposed. Especially comparing side-by-side shots with the Note 8’s f/1.7 sensor, which often had deeper contrast. This is interesting because a lower aperture lets in more light and thus a brighter shot. We think Samsung may be overcompensating in post-processing to make sure there’s no lower-light ill-effect of the narrower f/2.4 opening, but it’s hurting quality.

We’ve always loved Samsung’s blazing fast “Dual Pixel” auto-focus system. It’s now called “Super Speed Dual Pixel”, enhanced by the addition of dedicated RAM to the camera. But we’re told that improvement here is the behind-the-scenes multi-frame capture (the system shoots up to 12 frames in one shot to compile the clearest reproduction), not the AF speed as the name suggests. Another benefit of the upgraded camera is 960 fps slow-mo recording. There’s some compromise to get that incredible frame-rate, in the form of 720P resolution and reduced lighting (pretty terrible indoors), but it’s still neat to have.

In usual fashion, the Galaxy S9’s dropped with the latest Android version, while their predecessors are struggling to catch up. Samsung isn’t the best with updating its existing phones. Something to note is that we’re looking at Android 8.0 (Oreo), not the more current 8.1 (at the time of this writing).

Samsung’s UI is also upped to v9.0. Though, its aesthetics are largely the same as on the S8/Note8. The main updates actually revolve around Oreo’s new features, like Picture-in-Picture (PnP) mode, more efficient and cleaner notification system, and custom long-press app icon shortcuts.

Samsung is invested in its home-brewed Bixby virtual assistant, so it’s not going anywhere (nor is the dedicated Bixby button). Bixby operation is also the same as before (we won’t see any drastic updates until v2.0, supposedly arriving later in the year). So there’s the panel on the most left that aggregates information from apps of your choice ala “card” style, and long-pressing the Bixby button toggles voice commands. An advantage Bixby has on others is its robust ability to carry out specific actions, even within third-party apps. 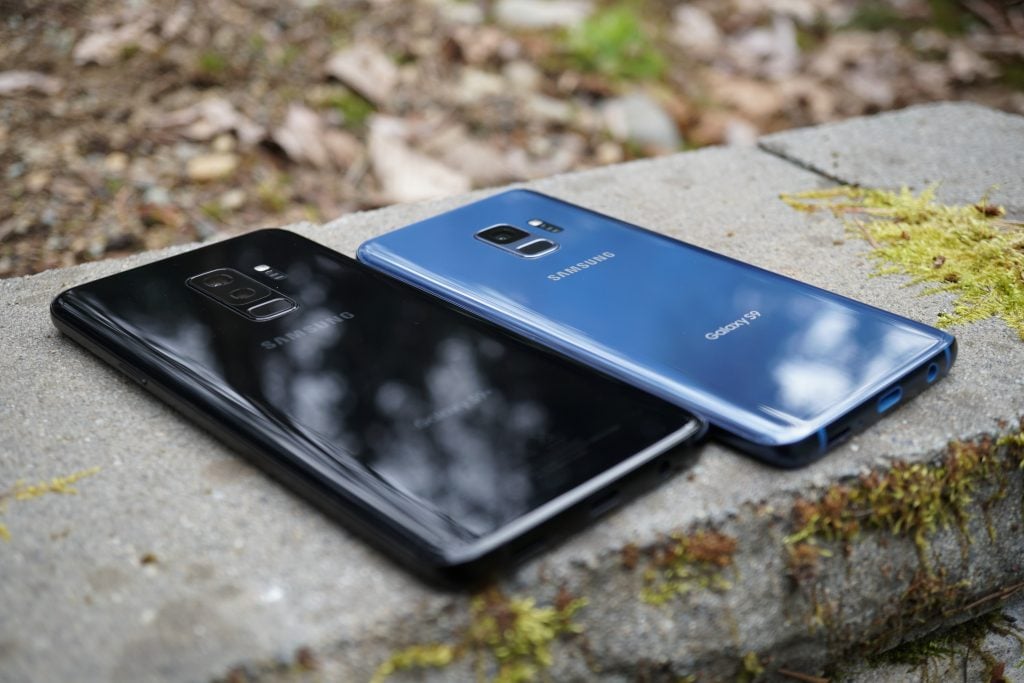 It’s no doubt that the Galaxy S9 and S9 Plus are two of the best smartphones you can buy right now. There isn’t much reason that they shouldn’t be recommended. Price is always a sensitive subject with top-end smartphones, but their prices aren’t unreasonably inflated. Well, that is, until the greedy carriers jacked up the prices.

On the other hand, the S9 and S9 Plus don’t offer a whole lot from their predecessors. It’s the most minimal refresh we’ve seen from Samsung. And when that happens, it muddles the recommendation. Most will probably agree that the S9’s updates aren’t worth hundreds more. And it doesn’t help that its most highlighted feature, the variable aperture camera, doesn’t actually equate to much. The considerable benefits of the S9 are the dual speakers, wide f/1.5 lens, corrected fingerprint scanner location, and brighter screen. It’ll be up to you if that’s worth the extra dough.

Read next: What we know so far: Samsung Galaxy Note 9

The devices for this review were provided by Verizon, provider of the nation’s largest and most reliable 4G LTE network