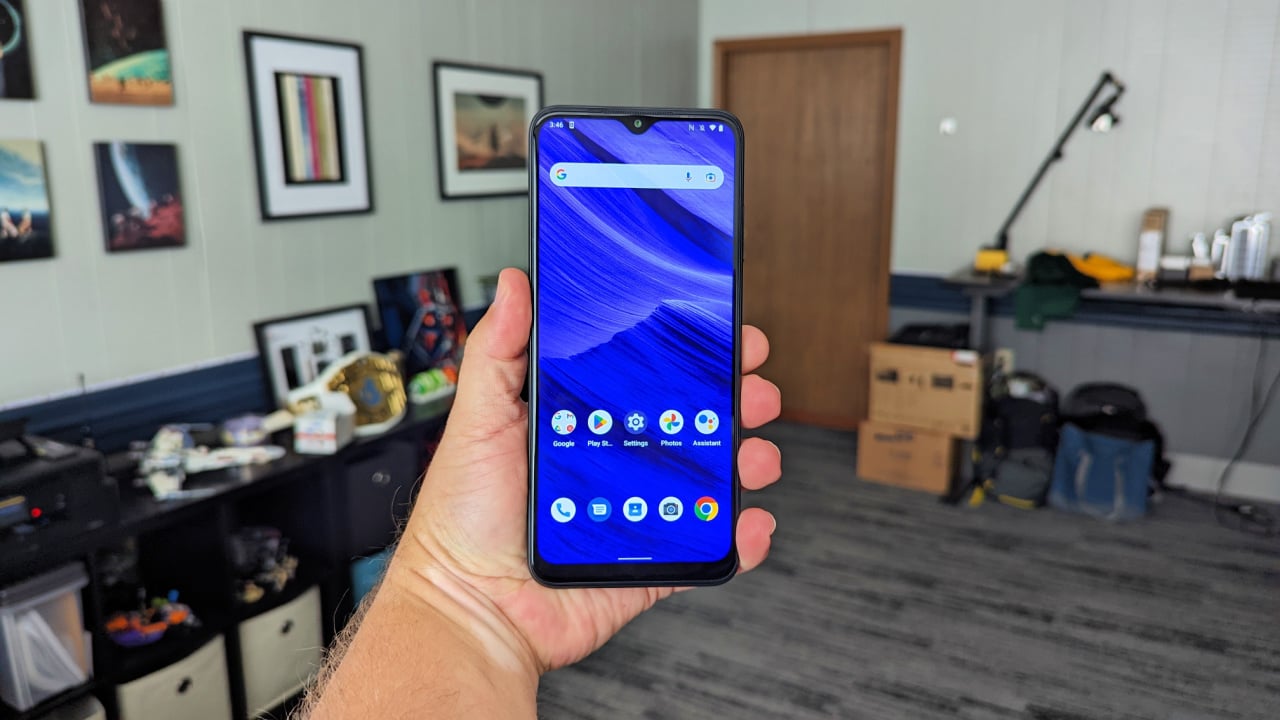 Most of the fanfare around smartphones tends to focus on devices that run about $700 or more. Carriers routinely spend time and money to tout flagships phones on print ads, website banners, and TV commercials.

While there’s definitely a market for those types of handsets, a huge segment of buyers are content with much less expensive models. And for good reason; there’s always a race to the bottom in terms of bang for your buck. Finding the right balance of performance and price is the key for most consumers.

T-Mobile’s REVVL line of phones has been around for a few years now and has been positioned as a low-cost, entry-level option. It’s a carrier-branded series that’s often priced in the sub-$250 space. The most current model under that umbrella is the REVVL 6 Pro 5G.

Priced just $220, the T-Mobile REVVL 6 Pro 5G offers up an incredible suite of hardware for the money. Spoiler alert – if you’re looking for a dirt-cheap device through T-Mobile, it’s an obvious choice.

It wasn’t all that long ago that a phone at this price might suggest a one-year relationship. Whether purchased as an emergency replacement or as part of a tighter budget, long-term performance and viability weren’t guaranteed. That doesn’t seem to be the case here with the REVLL 6 Pro 5G.

What are the T-Mobile REVVL 6 Pro specs?

If you understand smartphone bullet points, you know that the REVVL 6 Pro has a rather respectable amount of features for the money. Not only does it have a little more in the area of performance (RAM and processor), but it’s got some extras that you’d not expect to see, such as wireless charging and two forms of biometric unlocking.

It’s one thing to look good on paper, but it’s another thing to see how something fares in the real world. You could have a powerful device but you could also have an ugly one. Both can be true at the same time, and it has happened plenty of times.

The REVVL 6 Pro is far prettier than I imagined it would be. Its Dark Shadow grey is sort of a slate color that looks right at home with T-Mobile’s general branding. The magenta power button is a nice contrast, too, and adds a touch of flair to it.

The REVVL 6 Pro is a big phone, to be sure. At 6.82-inches, it’s one of the larger devices I’ve spent time with as of late. And while that’s perfect for reading and consuming content, the downside is the pocket space that comes with it. The phone feels really nice in hand but it’s a little slippery if you’re not careful.

I’m a fan of pairing the power button with the fingerprint reader as one can build up some good muscle memory. It’s quick and easy to wake the phone and unlock it at the same time.

You know what else I like? Headphone jacks. Yes, I still have a reason to use one on a phone and I’m glad when a device like the REVVL 6 Pro comes with a 3.5mm headphone jack.

For a mid-range phone, the REVVL 6 Pro sure handles day-to-day tasks quite well. I venture to guess that a lot of users would be happy with the type of performance provided by the handset.

I do find that while the fingerprint reader is fast and accurate, it’s a little too zealous. That is to say you cannot touch it at all without the phone trying to read the finger. You’ll feel a lot of tiny vibrations from inaccurate reads.

Although the screen has a 60Hz refresh rate and a lower resolution I found the REVVL 6 Pro to be easy on the eyes. If you’re not into high-end gaming, you likely won’t take issue with the display.

The plastic build doesn’t bother me and once I’ve got a case on it I don’t even remember its appearance anyhow.

A storage capacity of 128GB is plenty in 2022 as photos and videos are often automatically backed up in the cloud. The microSD expansion card slot is a welcome addition which leaves the door open for external storage if that’s ever an issue.

I really like the clean build of Android 12 that’s fairly close to the Pixel and stock experience. There are no extra apps installed on the phone; it’s about as clean as it gets.

As far as security updates go, my review unit was as of July 5, 2022 so it’s possible that quarterly updates may be in order. Given that Google and T-Mobile collaborate on the software, I hope that vital security patches are supported and that we get Android 13.

The screen worked better than I imagined being that it’s so large and a 1640 x 720 pixel resolution. I figured things might feel a bit more pixelated than it is. Capped at 60Hz for the refresh rate, it’s a decent if not average display, that’s good for movies, text, and games. I might appreciate a little more brightness at the top but it’s well within reason and price expectations.

Battery has been great thus far, netting me well over a day and a half in my first few weeks of usage. I suspect that I could get through a moderately intensive day of use without having to find a charger. Thanks largely to the aforementioned mobile chip and lower resolution display, a lot of folks will see two days without breaking a sweat.

I’m a fan of wireless charging but I really like a fast charger more. I’d rather plug my phone in for 20-30 minutes halfway through my day or near the end and get more than enough juice to last me through a night of Reddit, social media, and light gaming.

While the REVVL 6 Pro does have wireless charging, it’s not all that fast. Neither is the wired charging, for that matter. They’re average speeds, but I’m also looking at it more critically. I cannot imagine too many people complaining when they only have to plug in every (other) night at bed.

With four cameras to work with, the phone gives users plenty of options to capture images. Set in a 2×2 array, it delivers results on par with my expectations. In addition to the various cameras are a smattering of shooting modes and filters.

I’ve tested phones over the years that cost at least $100 more than the REVVL 6 Pro that take lower quality images. These aren’t amazing by any definition, but they look great on the big screen and once touched up with an app, they’re more than passable for social media and photo galleries.

Night time and low-lit environments might produce shots that come out a tad bit “off” if you’re trying to snap something that’s a little busier in the frame. The post-image processing and AI dial up the noise reduction, resulting in inaccurate lighting and grain. And while this sounds bad on paper, it’s actually not as harsh in practice.

As much as I love the side-mounted fingerprint reader and power button combination, I have found the REVVL 6 Pro to have a disappointing number of failed reads. Sometimes it’s on the order of three or four attempts before it unlocks the phone. I’ve resorted to using the PIN more than I would have liked.

When it comes to new phones, it’s hard to find any sort of lag or delays in things unless you’re actively looking for them. That is to say there’s very little that signals to me the REVVL 6 Pro cannot handle my daily phone needs.

Installing a few casual games and more graphic-intense titles doesn’t do much in the way of making the phone warm or feel like it cannot stand up to the demand. The Dimensity 700 isn’t a high-end processor but when paired with 6GB RAM, it’s more than enough for most.

While I might be a bit more critical of phone capabilities like photos, my friends and family are far less so. One way I tend to ground myself is to hand a review device over to other people to gauge their reactions. I find that everyone else is considerably more forgiving of or ignorant to differences.

It’s easy for me to recommend the T-Mobile REVVL 6 Pro for its target audience. I ticks the important boxes for entry-level users with room to spare and tosses in a few extras, too. For a phone that’s priced $220 it’s tough to ask more from a device.

Performance is on par with expectations and I feel confident in saying it would handle typical daily duties for well beyond another year or more.

Learn more about the REVVL 6 Pro at T-Mobile’s website where you can purchase one today.