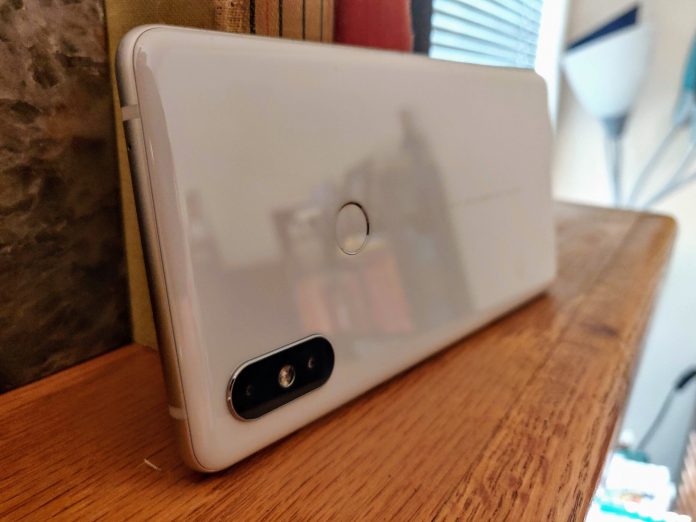 We got our hands on a Xiaomi Mi Mix 2S a while back, and for the past month or so I’ve been using it as my daily driver. It released back in April for about $530, which puts it in a similar category to OnePlus’ signature price point.

What follows is my full review of the Chinese-made flagship killer, largely unfiltered and completely candid.

As I mentioned in my First Impressions, the first thing I noticed when pulling the Xiaomi Mi Mix 2S from its box was its striking design. In a world of glass-bodied smartphones that all kind of have the same aesthetic (with Samsung and Apple leading the way), the Mi Mix 2S stands apart with a ceramic back and a wildly garish face that features a front-facing camera in the lower-right hand corner. Above all else, perhaps, this departure from conventional design is what stops me from using this phone all day, every day. More on that a bit later.

As you might expect from a ceramic-backed, 6″ smartphone, it’s hefty as hell. At 191 grams, it’s nearly a full ounce heavier than the Samsung Galaxy S9. But the feather-light phones to which we’ve grown accustomed usually come with a flimsy, fragile feel not present in the Mi Mix 2S. I have no delusions that if I drop it, the thing will shatter like any other, but that heft at least gives an illusion of durability.

Regardless, that ceramic back is both aesthetically unique and gorgeous, and the people I’ve shown the phone to have all been immediately intrigued by the design. If nothing else, it – along with that weird camera placement – is an eye-catcher. 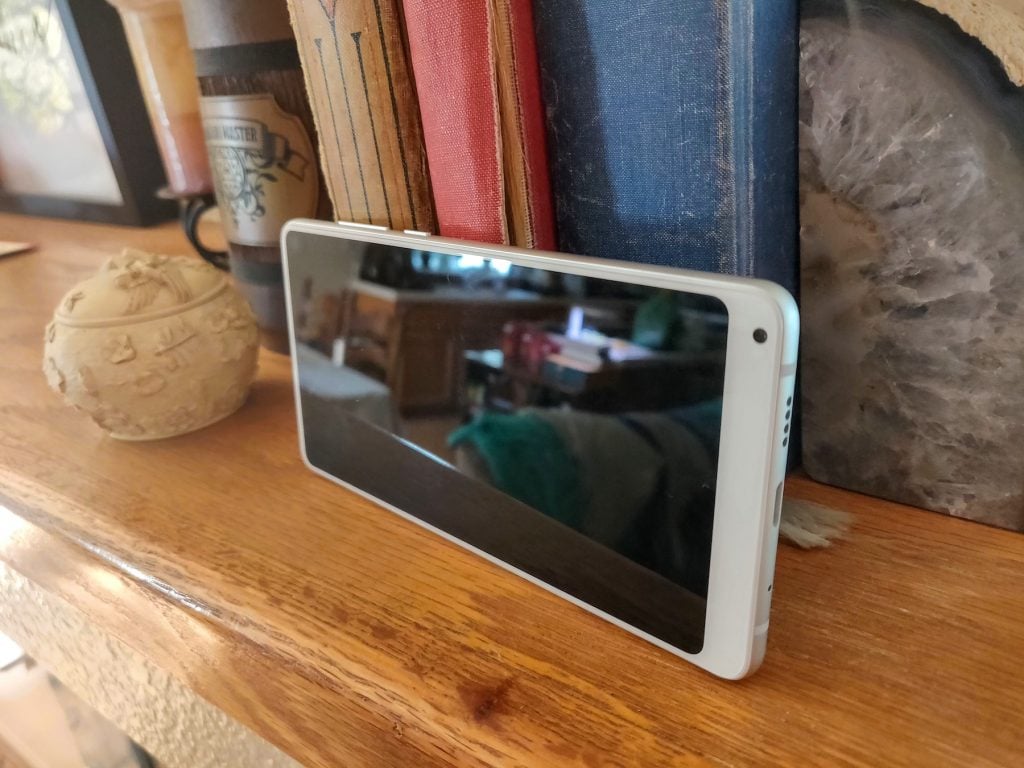 The decision to place the selfie camera in the lower-right corner of the device is a dubious one, but I can see why Xiaomi did it. In order to maximize viewing area at the top of the device, Xiaomi decided to move all the components that normally take up space there – camera, light sensor, proximity sensor – to the bottom of the device. The result is a little bit of a “chin” at the bottom with minimal bezels along the top and sides.

That chin provides a buffer between your supporting fingers and the display, so your thumb doesn’t have to reach so far down to reach the space bar or make the rather-delightful navigation gestures. The reverse side of this, of course, is without the now-infamous notch or a larger bezel on top, you have to stretch your thumb up higher to slide the notification bar down. It’s a tradeoff, but one I personally enjoy.

I still very much thing that chin is just begging for a row of toggleable capacitive buttons to maximize the screen usage. I know Xiaomi – and the rest of the mobile world – is pushing gesture navigation these days, but a row of capacitive keys that can be turned on or off would have gone a long way in easing us into gestures. If there’s one glaring sin of the Mi Mix 2S, though it’s the utter lack of any kind of waterproofing, with no Ingress Protection Rating to speak of. Splash at your own risk.

The Xiaomi Mi Mix 2S is kind of a beast. Many Chinese OEMs favor the native-made MediaTek processors, but Xiaomi recognizes that Snapdragon is the biggest name in town when it comes to sheer power. As such, it included the (currently) state-of-the-art Snapdragon 845 to power its Mi Mix 2S.

Depending on which model you pick, the Xiaomi Mi Mix 2S will either come pre-loaded with 6/128GB or 8/256GB RAM/ROM. Both of these marks are very respectable (especially when you consider that the $1000 Note 9 starts at the same capacities), though it doesn’t feature a MicroSD slot. The Mi Mix 2S stays on the cutting edge of connectivity standards, with Bluetooth 5 and 802.11ac WiFi onboard.

In short? The Xiaomi Mi Mix 2S is, at least in terms of sheer power, every bit the flagship the Samsung Galaxy S9, LG V35, or OnePlus 6 are.

One more little tidbit of information to demonstrate just how powerful it is: in the current AnTuTu benchmark rankings as of this writing, the Xiaomi Mi Mix 2S ranked 7th overall among Android smartphones, just behind the Samsung Galaxy S9 Plus.

The Xiaomi Mi Mix 2S’s camera situation is…complicated. Its rear camera performs well in many shooting situations. So much so it received a 97 Overall DXOMark Mobile score, placing it in a three-way tie for 7th with the iPhone X and Huawei Mate 10 Pro and just ahead of the One Plus 6.

The rear camera features a 12MP wide-angle primary lens with a 12MP secondary telephoto lens, with Optical Image Stabilization (OIS) baked in. DXMark found that it shoots exceedingly good quality static photos in all situations, but especially well in low-light situations – a rarity for smartphones. The Mi Mix 2S didn’t perform quite as well in DXOMark’s tests for video, but still got a respectable score of 88.

Personally, photo and video are two areas I don’t use my phone all that often – I don’t take pictures of my food, nor many of my pets, nor many selfies. I do, however, take pictures of my painted tabletop gaming miniatures – and in this area, where zoom and close-focus are important, the Xiaomi Mi Mix 2S performs as well as any phone I’ve held in my hands. The test shots I took were generally very crisp, even in low light and on the move.

So while I am certainly no expert photographer, I probably am a pretty decent representation of the average consumer when it comes to taking pictures. Whether in the hands of an average Joe/Jane or in a lab-tested environment, though, the fact remains – the Xiaomi Mi Mix 2S has a fantastic rear camera.

The front camera, however, is problematic to say the least. With it’s lower-right hand corner placement, it presents all sorts of problems for any camera app that isn’t the Xiaomi one. The Xiaomi Camera app rotates with your phone as you turn it to get a better camera angle (selfies taken from the bottom, up are not flattering), which is great. However, Snapchat, Whatsapp, Hangouts and others that use their own dedicated camera software do not. So you’re either stuck with a selfie you have to rotate 180 degrees, or you’re stuck with a really unflattering shot. And that’s really a shame, because the pictures it takes are quite good. They’re crisp, vibrant, and quick – what more could you want from a selfie?

Other than it being right-side up, of course.

At 3,400mAh, the Xiaomis Mi Mix 2S’ battery is pretty solid for a 6″ phone. It isn’t quite the 4,000mAh one on the Samsung Galaxy Note 9, but compared to the last generation of smartphones, it’s perfectly adequate. It performs well enough, but still generally requires a recharge after an average day’s use. So while it has about 400mAh more juice than your average flagship device, it won’t really net you any more usage time from a practical standpoint. You’ll still be throwing it on to charge every night, as you always have. Until we start seeing OEMs willing to go 4,000mAh or higher – and it’s worth noting that Samsung recently climbed aboard that train – we won’t see any meaningful developments in smartphone battery life. 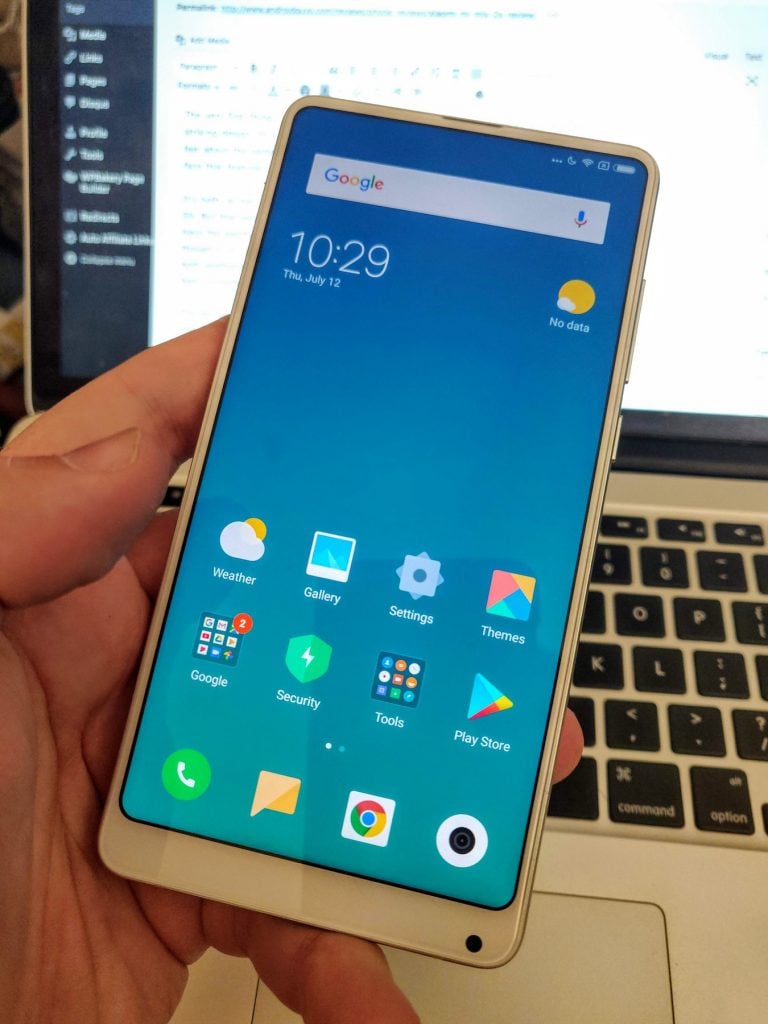 MIUI has come a long way; I remember back in the early days of Android, MIUI was just an iOS clone with questionable compatibility and a great theme engine. But, it’s really come into its own over the years, developing into more of a stock Android experience with a few tweaks and a custom launcher.

The firmware is quick and crisp, and is much more Android than Apple at this stage. The MIUI Launcher is really limited in its options, and I suspect most people – like me – will switch it to Nova or something similar in short order.

MIUI’s Gesture controls are really crisp – much more so than Google’s. A Left or Right edge-swipe takes you Back (with an animated Arrow icon), while swiping up from the bottom goes Home.

Swiping up and holding it briefly brings up your recents – and that’s the gesture that really stands out from Google’s, which requires a much longer “hold.” I find myself struggling with Google’s gesture controls, but thoroughly enjoying MIUI’s. It’s a fine balance, and while I’ve no doubt that Google’s will evolve in time, currently Xiaomi’s have the edge. 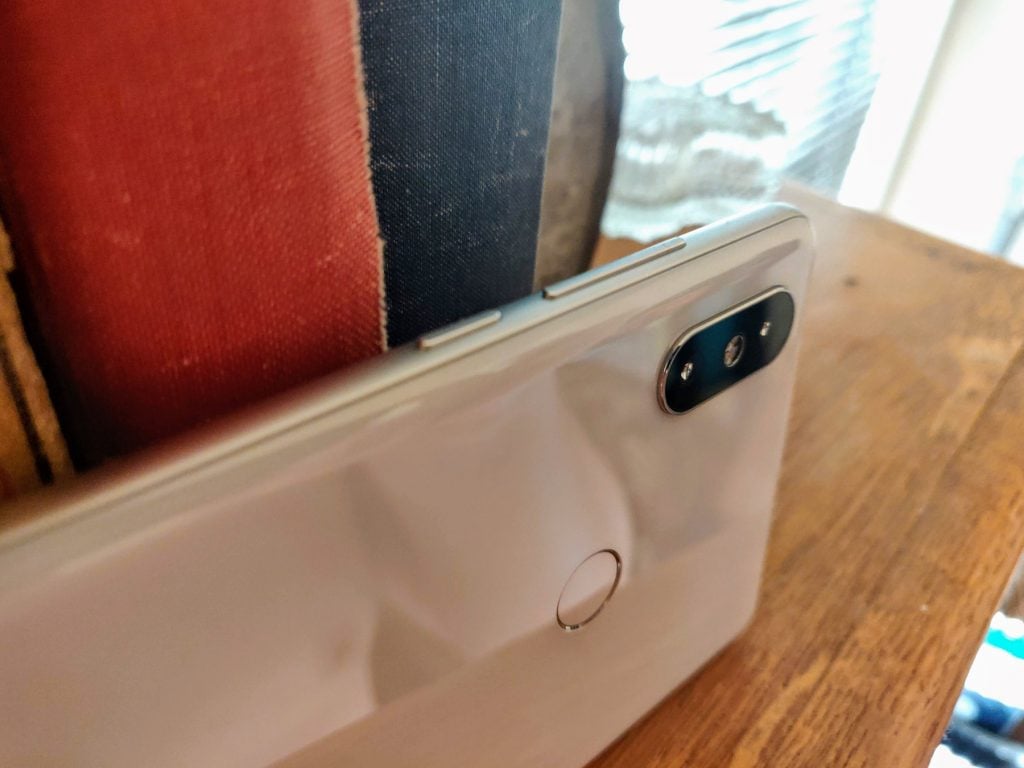 With a starting price of $500, the Xiaomi Mi Mix 2S hits a similar, flagship-killing pricepoint to the OnePlus 6 and its ilk. The Mi Mix 2S offers wireless charging, which none of the OnePlus phones can boast, and features a gorgeous ceramic aesthetic that compares favorably to the OnePlus 6’s glass frame. The OnePlus 6, on the other hand, features an AMOLED display and a normally placed camera, which are clear plusses over the Mi Mix 2S’s respective LCD and oddly-placed camera.

The short of it, though is that with the Xiaomi Mi Mix 2S, you get a phones that competes with the Samsung and LG-made flagships of the world, for a fraction of the price.

I spent about a month with the Xiaomi Mi Mix 2S, and I really enjoyed my time with it. It’s got a unique design, great aesthetic, phenomenal, flagship-caliber specifications and a much-improved UI that’s just different enough to set it apart.

A couple design quirks like an oddly-placed front-facing camera and a lack of Ingress Protection Rating make you tilt your head in confusion, but I’m thoroughly impressed with the Xiaomi Mi Mix 2S. At its price point it’s every bit a competitor to the Flagship-Killing Throne that OnePlus currently sits atop.

The Xiaomi Mi Mix 2S is available from Amazon or GearBest for between $500 and $700, depending on your storage and RAM size.