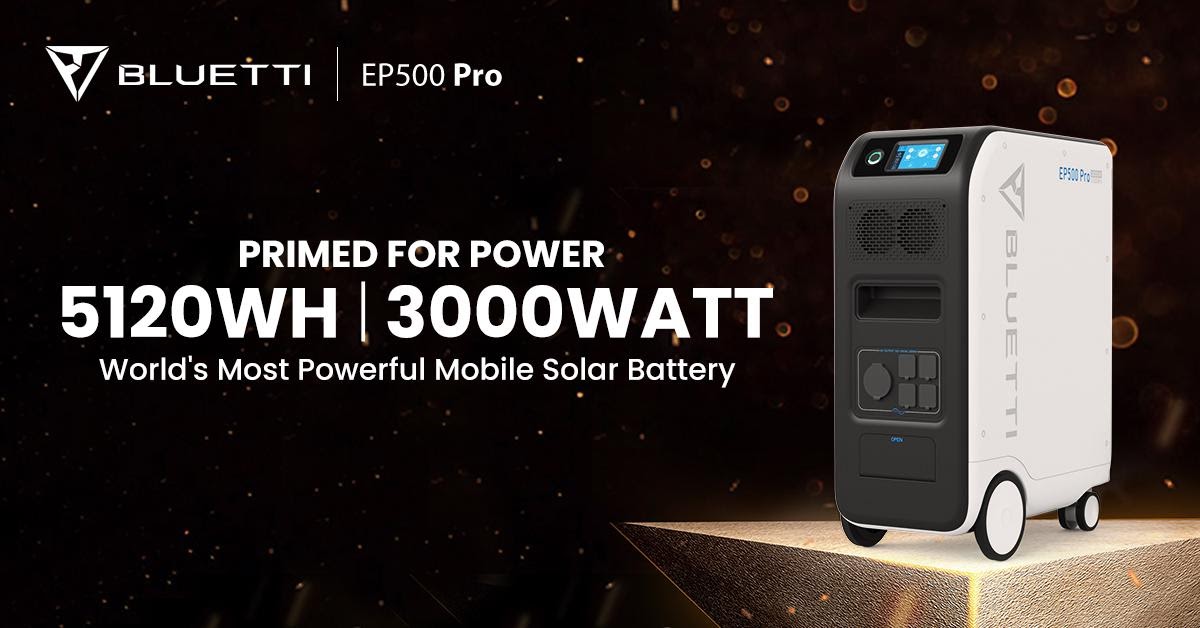 BLUETTI, a U.S.-Chinese renewable energy start-up, once again, created another miracle after their huge crowdfunding success with the cutting edge AC200 last year.  Their latest 5.1kWh home power station – the EP500/Pro – has pulled over $1 million in the first hour at kickstarter.com and is now rapidly approaching the $3M milestone in less than three weeks.

It’s over two weeks since BLUETTI launched their latest flagship series – the EP500/Pro on Kickstarter, and raised staggering $1 Million US dollars in the first hour. But since the pre-launch, all the details BLUETTI released have revolved around the EP500. The outside world only knows the key specs of the 3000watt Pro, but few know the details of this mysterious “Pro” version.

The Bluetti EP500 Pro could be the most powerful mobile power station ever. It features a ground breaking NEMA L14-30 30A receptacle that provides up to 3000 watts of continuous power at 120V which covers almost all your needs when the grid is down. For your latest digital gadgets, the EP500 Pro provides two 100W USB type-c ports that comply with PD3.0 protocol. You can easily power your whole family’s phones, laptops without those bulky adapters.

Another big feature of the EP500/Pro is the long list of accessories that accompany them. With the launch of the Pro, owing to some of the updates to the power station’s design both inside and outside, the accessories are seeing some great changes as well:

There are three new accessories hitting Kickstarter alongside the EP500/Pro.

Integrate One EP500 Pro Into Your Home Circuit

Ever since BLUETTI launched their 2000 watt AC200 last year, people have been wanting to integrate this power beast to their home circuits. BLUETTI has finally released their first integration kit for their flagship models (which totally makes sense since the EP500/Pro is positioned as a home power storage center). According to the information provided by BLUETTI, users can wire their vital loads/receptacles to this “sub panel and when the power grid goes down, all these vital loads/receptacles will be immediately(in less than 20 ms) taken over by the EP500/Pro’s UPS system. This would be a life saver during those rolling power outages keeping your lights on, your hot water running and space heater warm without any interruption.

We’ve seen the fusion box for EP500 earlier on BLUETTI’s campaign page which can connect two of these units and double the power, voltage and capacity via split-phase. People have been wondering how BLUETTI would connect two 30A outlets on the Pro and produce 6000W of high output power. Here is the answer: The Fusion Box Pro is equipped with an array of heavy-duty 30Amp/20Amp outlets including a 120V/240V 30A(Up to 6000W continuous power) receptacle like we’ve seen before on the Fusion Box, and two NEMA TT-30 (or is usually called the 30amp RV receptacle). This designation is made specifically for recreational vehicles and is perfect for the RV crowd.

The EP500 can accept Photo Voltaic input within the range of 45-135 Volts and a slightly wider range of 35-150 V for the pro. For people who already have a huge array of solar panels at home or on your rooftop, don’t worry just yet. BLUETTI’s PV voltage can step down your system voltage and will adjust the total input voltage of your array to made it usable with the EP500/Pro, This will save the cost of purchasing additional solar panels for those who have an existing solar grid!

All of this amazing off-grid power gear is now on a hot sale at Kickstarter.com.  You may click here to find out more or to get yours right away:

According to BLUETTI, the price during crowdfunding is often the lowest ever and it will rise to a relatively expensive daily retail price when the crowdfunding campaign ends. If your home needs such a product to cope with the unpredictable & frequent power outages, now is the best time to place your order.

The BLUETTI team has promised to start shipping EP500 in June and EP500 Pro in August.

To offer an incentive to order now with the customer’s long wait, BLUETTI also will provide a 3-year warranty and lifetime tech support for EP500 & EP500 Pro for their crowdfunding backers. You can also opt for the extended additional one-year warranty for $399 or $699 for two, which makes the total warranty period to 5 years top.

Startup owners are known to juggle multiple tasks simultaneously, as startup management can be an overwhelming job for most. Of course, they're...