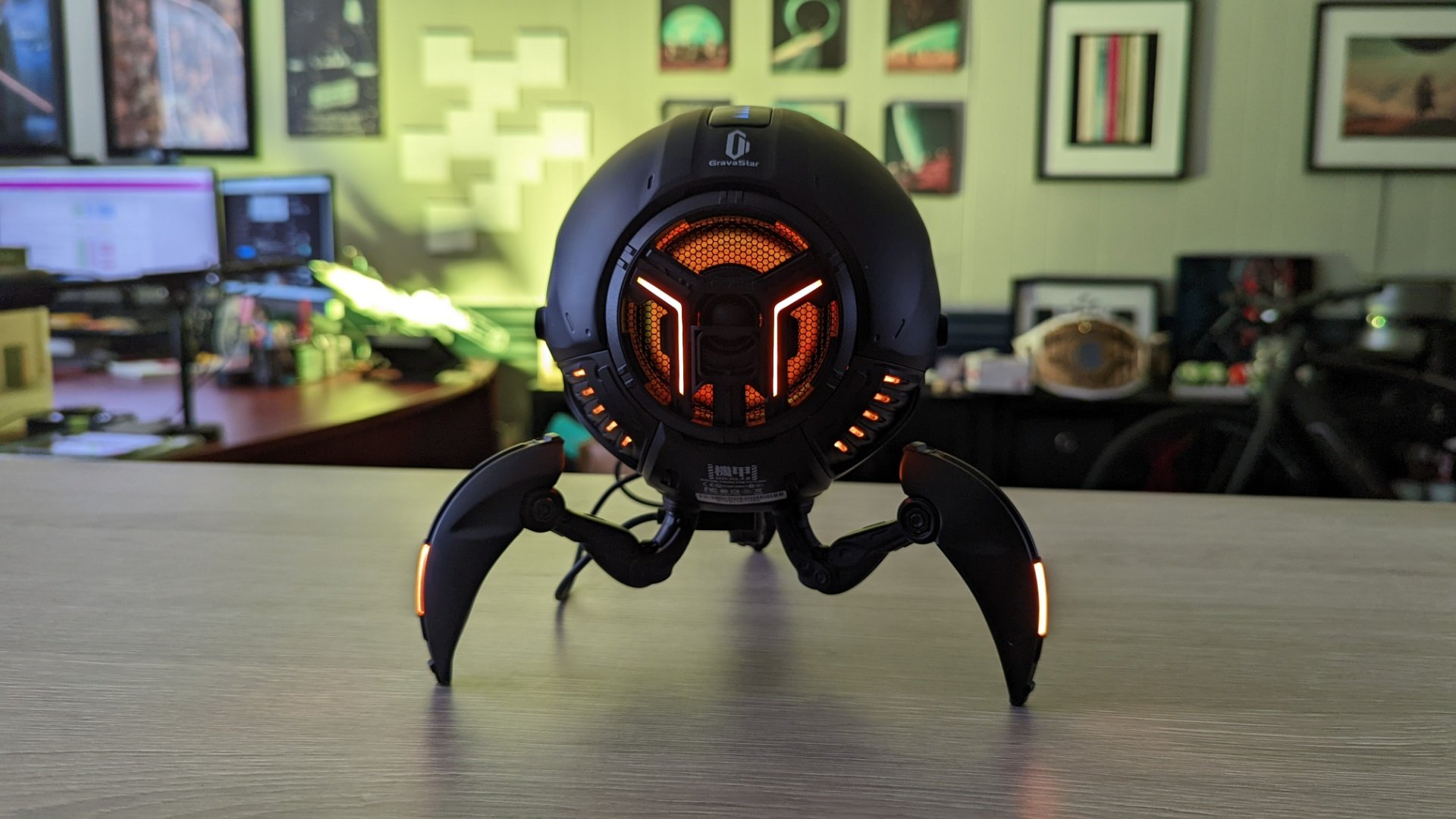 How important is the design and look of a Bluetooth speaker to you?

Do you prefer a minimalist look that blends into any environment or something that sits on a bookshelf without calling attention to yourself? Or, might you be more interested in something that begs for that attention, asking you to not just listen to it, but look at it.

If you’re in the latter segment of consumer, the GravaStar Mars Pro speaker is something you’ll want to check out. It’s the sort of Bluetooth speaker that wants to be front and center or sitting prominently in the background of a Twitch stream.

The GravaStar Mars Pro is, for lack of a better description, a robotic spider from outer space. Remember DOR-15 (Doris) from Meet the Robinsons? How about the DSD1 Dwarf Spider Droid from Attack of the Clones? It’s not too unlike those two.

Available in a variety of colors, the speaker has the same design language as the GravaStar Sirius Pro earbuds. That is to say it looks like something that’s been through a few battles. Moreover, it employs RGB lighting for added visual effect.

Pricing ranges from about $230 up to $350 depending on which version you purchase. I’ve been sent the Black version which doesn’t have any war damage and comes in on the low end. The Shark 14 is a special edition and features a very cool paint job with a ton of detail and added weaponry. I don’t know that I’d spend an extra $120 for the visuals but I’m sure there are plenty who would.

There’s more at work here than just a cool paint job and interesting design. The materials are high quality, including the zinc alloy shells, metal bolts, and articulating legs. But those LED lights are perhaps the coolest aspect.

Gravastar advises there are six LEDS but the overall number of areas that seem to light up is considerably higher. Either way, it’s pretty neat stuff. You can change colors from a number of colors and modes with green, red, a pair of blues, purple, and amber dancing to your music, continuously cycling, or just looking awesome.

On the bottom of the belly you’ll find a USB-C charging port which can also be used as an analog input using the included USB-C to 3.5mm jack. Also in the box is a USB-A to USB-C cable for charging,

On the rear of the speaker is a handful of buttons, one for power and playback, one for Bluetooth pairing, and one for LED light mode. Volume control is its own unique deal with the strip of LED lights on the top of the orb. Simply place your finger wherever you want and slide it to raise or lower the volume level.

Putting aesthetics aside, how does the Mars Pro sound? I found it packed quite a punch and it was surprisingly loud. I did not expect it to have the presence that it does.

There’s a fair amount of clarity with an evenly distributed layers. It does skew a little bit heavy and dense at times, but it’s not bad or distracting. I would love an app to adjust equalizer settings or pick from a few preset options, especially as that’s becoming more common in pricier audio devices.

Despite its round shape, there’s no 360-degree field of audio. That is to say you’ll want to face the speaker to get the best sound and distribution. Move around the side or listen to it from the back and you’ll lose some of those highs.

I appreciate the support for SBC and AAC codecs but they do come with a bit of added latency. If you’re using this speaker for gaming, you won’t have the low-latency that you’d expect. This is a little strange to me, because as I indicated earlier, I see this speaker sitting on shelves and desks of gamers and Twitch streamers.

I also dig the 15 hour battery life as I don’t have to charge the speaker but maybe once or twice a week. Results will vary based on volume level and whether or not you’re using the LED lights.

While on the subject, this is also an area where an app would be helpful. There is no way to understand how much battery life remains so you’ll have to do what you can to track playback.

Judged solely ss a speaker, the GravaStar Mars Pro is a good one but not quite worth the $230 asking price. Were it to have a more standard or modern design I might expect to pay about $130-$150 for it.

Is it worth the extra $80-$100 for the futuristic robot spider design? It might be. It’s a little too “out there” to have it on my office desk but it does look cool on the bookshelf. And if I’m setting a mood with lights and music, I like having it around.

If you’re looking to outfit a studio, home office, or gaming room, the Mars Pro will help out quite a bit. I also like this speaker as a gift idea for someone who “has it all”.

You can learn more about the Mars Pro and other products at GravaStar’s website where you can purchase one for as low as $230 today.