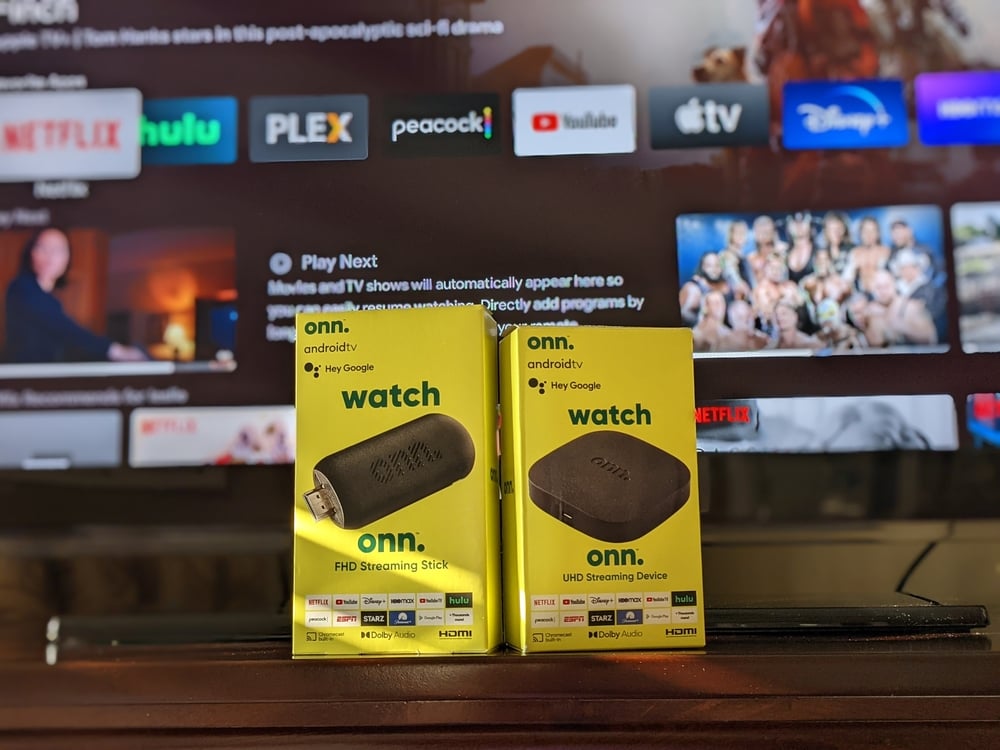 People don’t often purchase a new TV. Many studies show that it’s a once-a-decade buy for most households. With this, streaming devices meant to augment older TVs are almost priceless in the digital age of on-demand content from the likes of Netflix, Hulu, and Disney. Wal-Mart has recently entered this market with two devices running Android TV and I’ve been using these for about a month with pretty positive results.

Wal-Mart has released these two units under its Onn tech brand. The more budget-friendly Onn Streaming Stick is exactly that. If you’ve seen a Roku or Amazon Fire TV stick, then this will be very familiar. Essentially, it’s a USB thumb drive-sized streamer with an HDMI and micro-USB power input port. 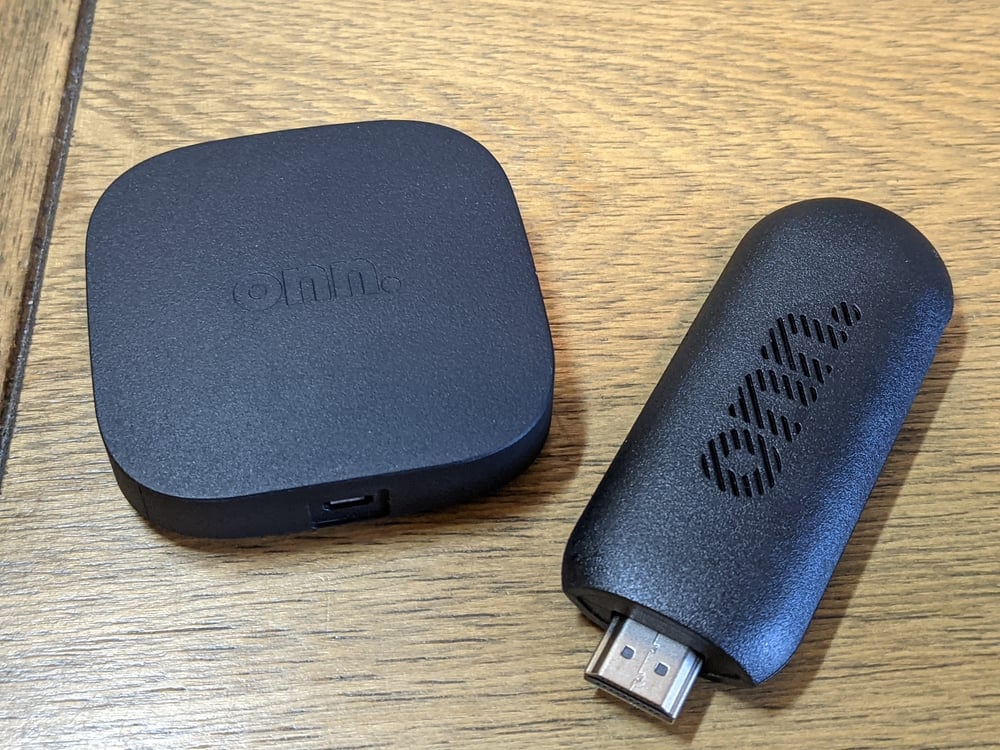 The Onn Android TV Stick is full HD only. While for most this isn’t a big issue, but if 1080p is hard on your eyes, it’s worth a mention. It’s also a nice reason to consider the upgrade to the dongle version.

The Onn Streaming dongle is a slight upgrade from the stick. You get a small square box that’s roughly 3″x3″ in size. Again, you have a micro-USB power port on one side and an HDMI out on the opposite. Once you plug both into the Onn and you have a ready-made Android TV experience.

As mentioned, the Onn Android TV dongle takes the video experience up a notch. You can stream in full 4K quality with this little magic box.

Both the Onn Android TV streaming Stick and dongle come with the same remote and that’s a good thing. The remote is based on the Google G10 reference design. This leads to a well-laid out and comfortable remote. 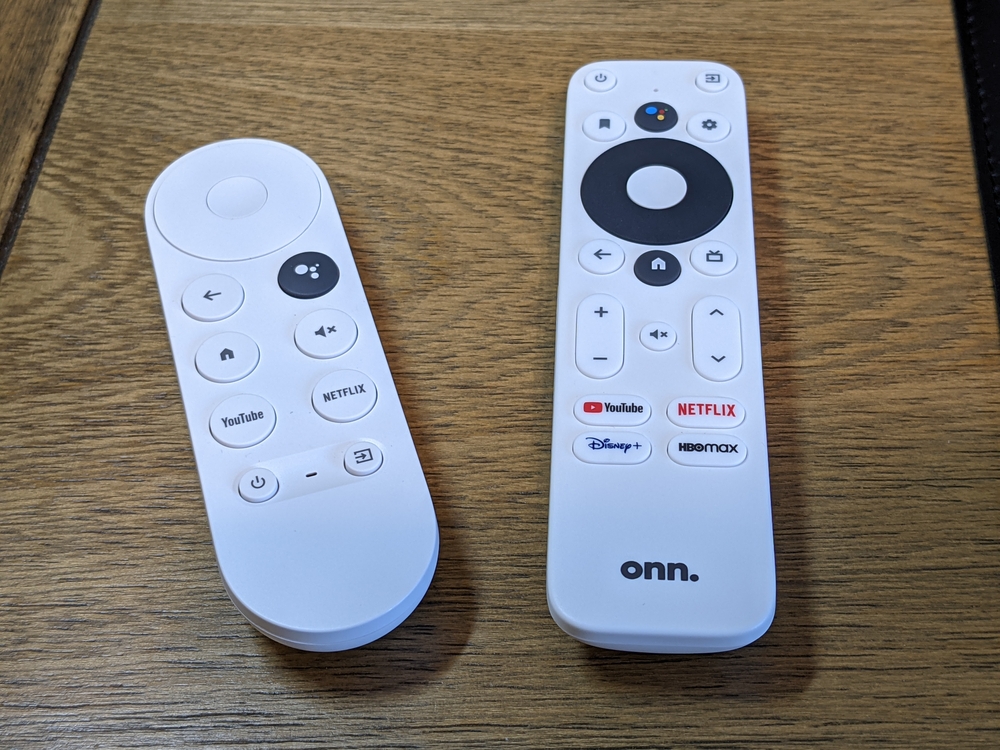 You have the basic D-pad for navigation with hardware shortcuts for Favorites, Google Assistant, and Settings just above. Below you have the Back, Home, and Live TV buttons. Rounding out the Android TV experience are dedicated buttons for streaming services. You will find YouTube, Netflix, Disney+, and HBO Max all live here for easy access without having to go to the home screen each time.

You can also pair the traditional TV hardware actions to work with the remotes for both. This links volume controls, inputs, channels, and power buttons via IR for most televisions. This creates a seamless “universal” remote experience with just the Onn remote.

Daily use of both the Onn Android TV stick and dongle has been pretty great. These streamers are currently running Android 11. While this isn’t the same new Google TV UI that you find on the latest Chromecast, it does share enough DNA that most probably won’t notice. 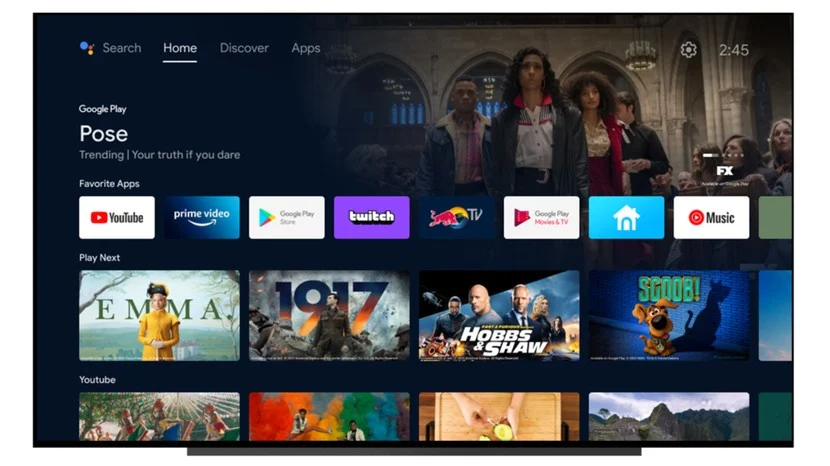 The Onn Stick is slightly more limited in this regard with half the RAM that the larger dongle carries on the inside. While 1GB of RAM should still perform OK in most instances, I did notice it trips up occasionally with transitions to the home screen or launching apps more often than the 2GB in the dongle.

Storage may be an issue in both of these units long-term. For some unknown reason most OEMs, including Google, think that 8GB of internal storage is sufficient for a modern Android TV streamer. This will be plenty of space to get you started and install the first handful of apps you need, but as time and cache build up around general use, history with the Google Chromecast with Google TV show this will become an issue of running low on storage.

This limited storage may create an atmosphere in a fairly short amount of time with the need to jump through hoops to free up space. If left alone users will be presented with failed updates or a lack of space to install new apps. And with the Onn streamers both using micro-USB for power, there are not as many, or easy, solutions that the more modern USB-C standard brings for adding external storage.

Despite this reservation, I had no issues using either the Onn Streaming Stick or Dongle. Android TV still looks and performs great and I had success using all my streaming services. Google Assistant also works well with the dedicated button on the remotes.

This is Wal-Mart making a concerted move to have an in-house answer to both Roku and Fire TVs in my opinion. Honestly, it’s a good one too. Both devices offer similar form factors and price tags to let users add Android TV to an existing TV in their homes.

Speaking of pricing, both the Onn Streaming Stick and Dongle are under $30. Normal pricing has the better 4K dongle priced at $30 and the stick at $25. However, you can regularly catch these for much less and are currently priced at $20 and $15 respectively.

This is the leverage and scale that only a company the size of Wal-Mart can offer and this first foray into the Android TV market shows that it has the chops to produce compelling competition to the streaming set-top market.