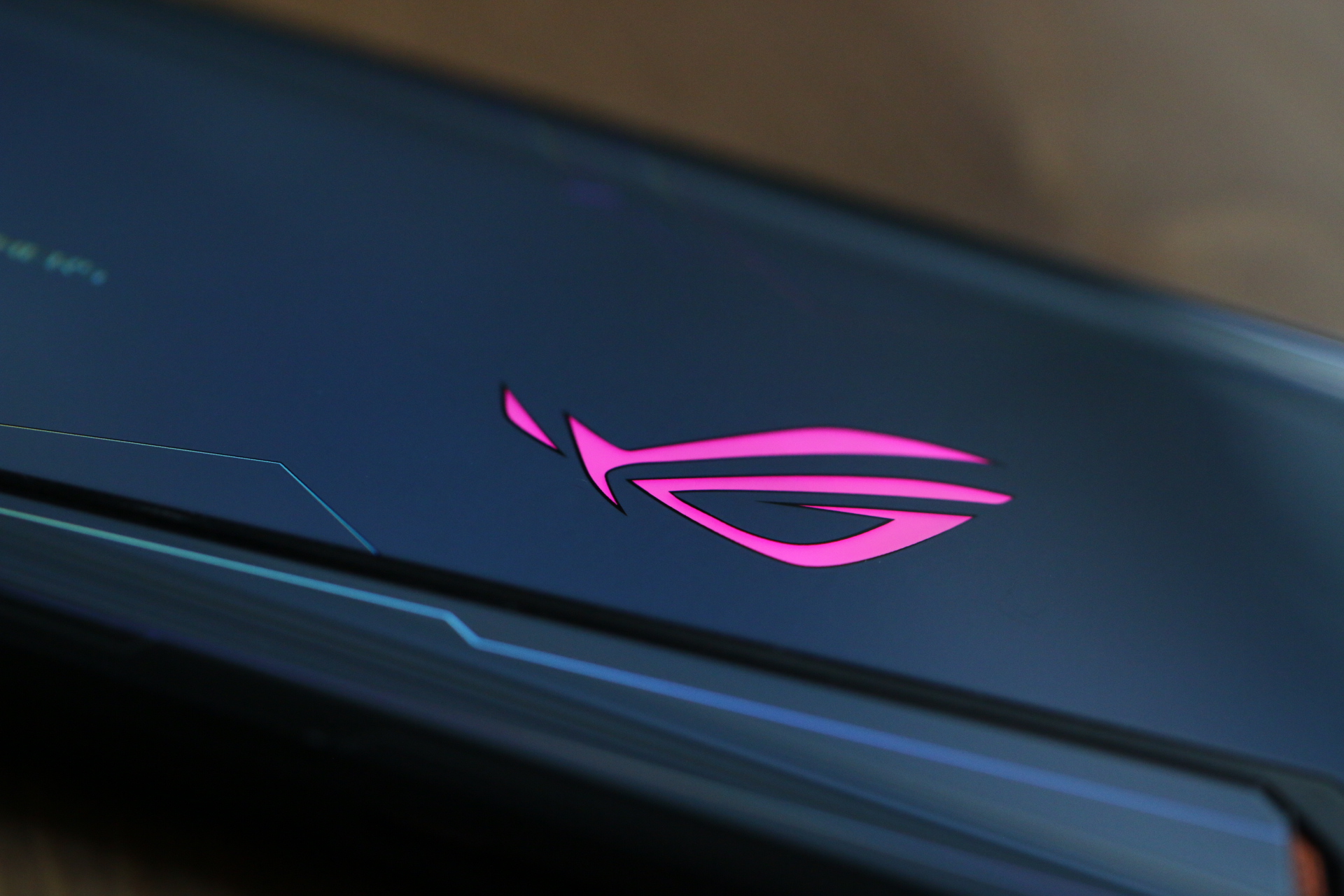 I am not a gamer. Well, let me clarify that; I’m not a “mobile gamer”. I’ve been gaming on PC and console for basically my entire life but mobile gaming has never really taken off for me.

I’ve had top of the line Android and Apple phones capable of playing whatever games were out there. I’ve had an NVIDIA Shield TV that can play games from the Google Play Store. Hell, I even have a Nintendo Switch. For whatever reason, they just don’t do it for me.

So, when I started my review of the ASUS ROG Phone II, I knew I was going to have to approach it a little bit differently. I can’t speak intelligently about the gaming performance of this phone, because frankly, I don’t have experience with Android gaming.

I decided to look at it through a different lens. I might not be a gamer, but I am a “power user”. And as much as I hate that term, I do fit it. I’m on my phone for 7-8 hours a day working, entertaining myself, and keeping in contact with friends and family. Even though ASUS wants this to be known as the best gaming phone out there, I think they need to accept that they didn’t make the best gaming phone of 2019. They made the best phone of 2019. Period. 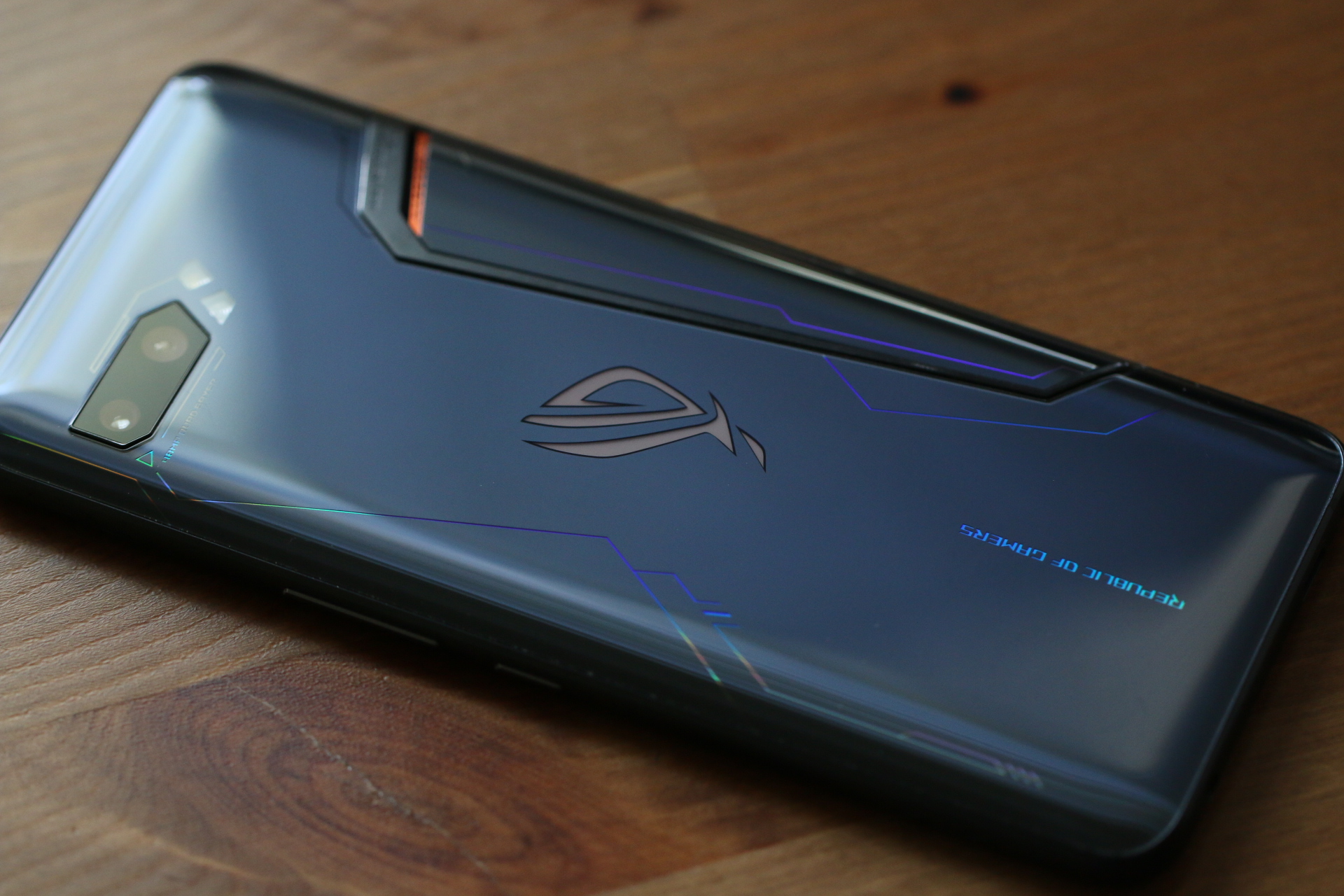 While every phone manufacturer wants to market its device as “an experience” or a life-changing event, they’re just phones. They’re a collection of components that run Android and live in either our pocket or our hand. The ASUS ROG Phone II is exactly that, but it’s one of the devices that I feel ends up being more than the sum of its parts. Very few phones are able to jump this hurdle but the ROG Phone II does.

So, what does that actually mean?

Picture this: you’re in the carrier store looking for a new phone. Lined up on the wall you have the newest releases from Samsung, Apple, LG, and OnePlus. They’re all same-y looking with displays that cover the entire face of a phone, almost no bezels and bright screens. They’re sleek, they’re sexy, and they scream out to be held.

The ROG Phone II is not that. It is huge and is unconcerned about being skinny or small. Its design is aggressive, not svelte. It is powerful and unapologetic about it. 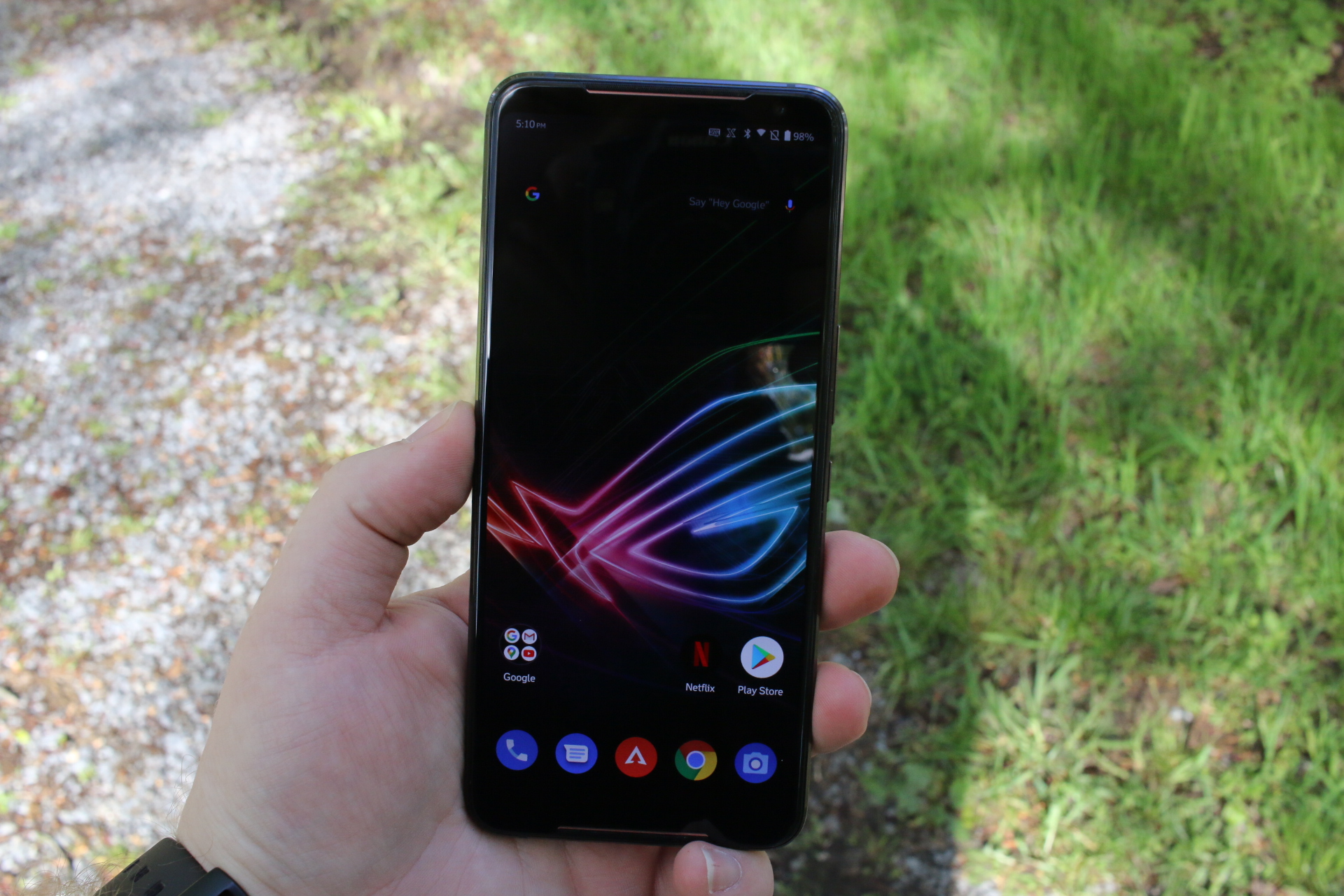 The 6.59-inch 120Hz AMOLED display isn’t the biggest on the market, but it’s close. But the phone feels absolutely massive in your hands because above and below that display are front-facing speakers.

Between the beautiful display and the class-leading speakers, this is a media powerhouse. Sure, it’s great for gaming but if you watch videos on your phone, this is the phone you want. The speakers sound better than some Bluetooth speakers I’ve reviewed and max volume is insane. You could sit this thing down in a corner at a party, pump the volume and provide music for the whole crew. It’s that good.

And that display is excellent. While I was happy with the 90Hz options last year, the ROG Phone II pumps it up a notch to a 120Hz refresh display. That means the display is refreshing itself 120 times a second.

The standard in the past has been 60Hz, or 60 times a second. This added refresh rate gives us silky smooth animations that makes everything feel faster and more fluid. While this is a feature that most can live without, I think it adds to the overall package in a way that most features can’t. It enhances everything else. 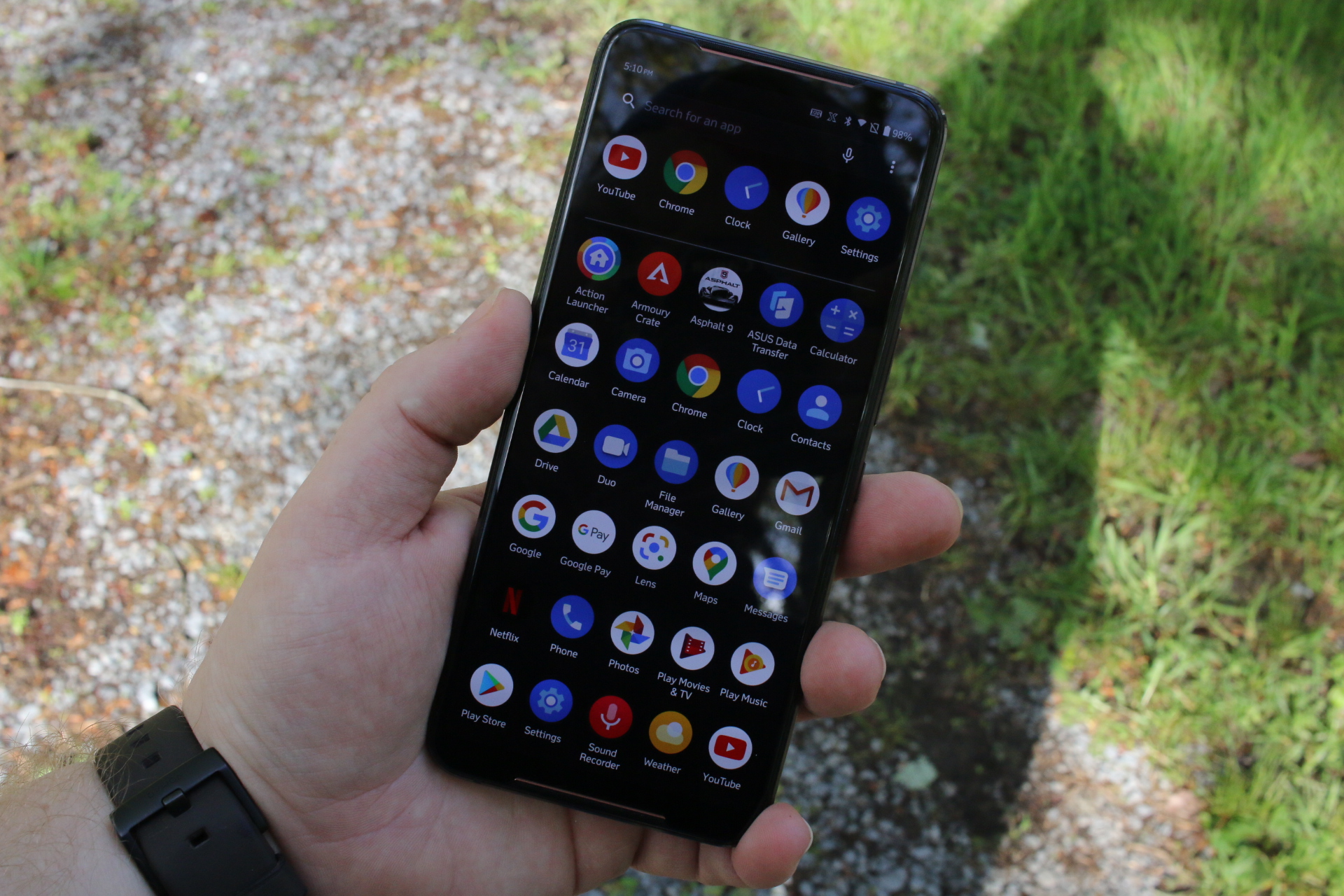 Speaking of enhancements, the 6,000mAh battery means you can keep all of those enhancements enabled. Battery life is the biggest feature for me when selecting a device because nothing else really matters if my phone is dead halfway through the day, or if I’m unable to use it because it’s sitting on a charger.

Simply stated, this is the best battery life I’ve ever seen on an Android device and comes second only to the Apple iPhone 11 Pro Max in my in-person testing.

I don’t run benchmarks or do scientific battery testing because real people don’t do that either. In my experience I was getting 1.5 days of usage with close to 10 hours of screen-on-time. Again, take note that I’m not a gamer and mostly work in documents, read Reddit, watch YouTube, message, and deal with a ton of email. You will absolutely get through a day of use with this unless you’re playing PUBG all day.

One of the last things I want to focus on here is software. ASUS has a reputation of putting terrible skins on its devices in the past, but I’m happy to report you can pretty much bypass that here on the ROG Phone II.

ASUS does give you the option to use its theme, but you can choose stock Android if you like, and that’s what I did during my usage. It felt quite a bit like the Nexus/Pixel experience with some added features. 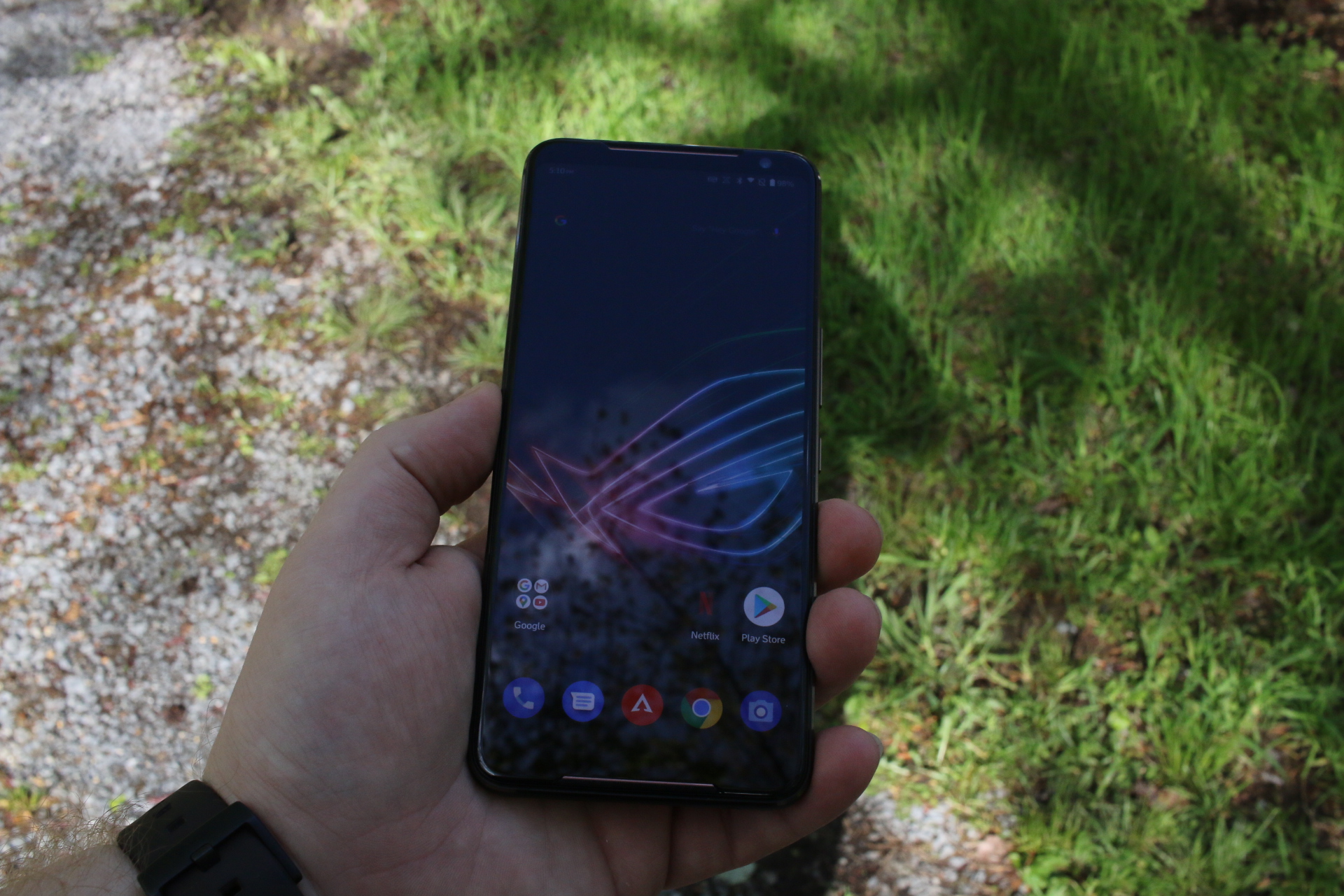 We’ve seen this approach by more and more companies over the last few years. Motorola started the trend and others like OnePlus have picked up the mantle.

ASUS let Google focus on the core of Android while putting its focus into features like Armory Crate, which allows you to fine-tune almost every aspect of your device from the clock speed of your processor to hiding notifications while you’re gaming.

You can even dial in custom settings depending on which app or game you have open. It’s crazy good and gamers and average users alike will find features in there they love.

ASUS also took the time to add in an audio wizard. This is an area that most companies are shying away from, just like how they’re getting rid of the headphone jack. The headphone jack is a feature here on the ROG Phone II and the audio wizard makes sure you get the most out of it. There are a ton of EQ scenes and DTS X spacial audio so you can dial in audio exactly how you want it.

My biggest issue with the ASUS ROG Phone II’s software is the unknown. Who knows how many updates this phone will get? Who knows how fast they’ll come?

ASUS is not the company you think of when you think of fast updates or long-term support. If those things matter to you, I’d tell you to really do your research first-hand and make sure you’re comfortable with whatever the results are before dropping your money on one of these.

If you do decide to pick one up, I think you need to be prepared to be stuck on that software for the duration of the phone’s life. 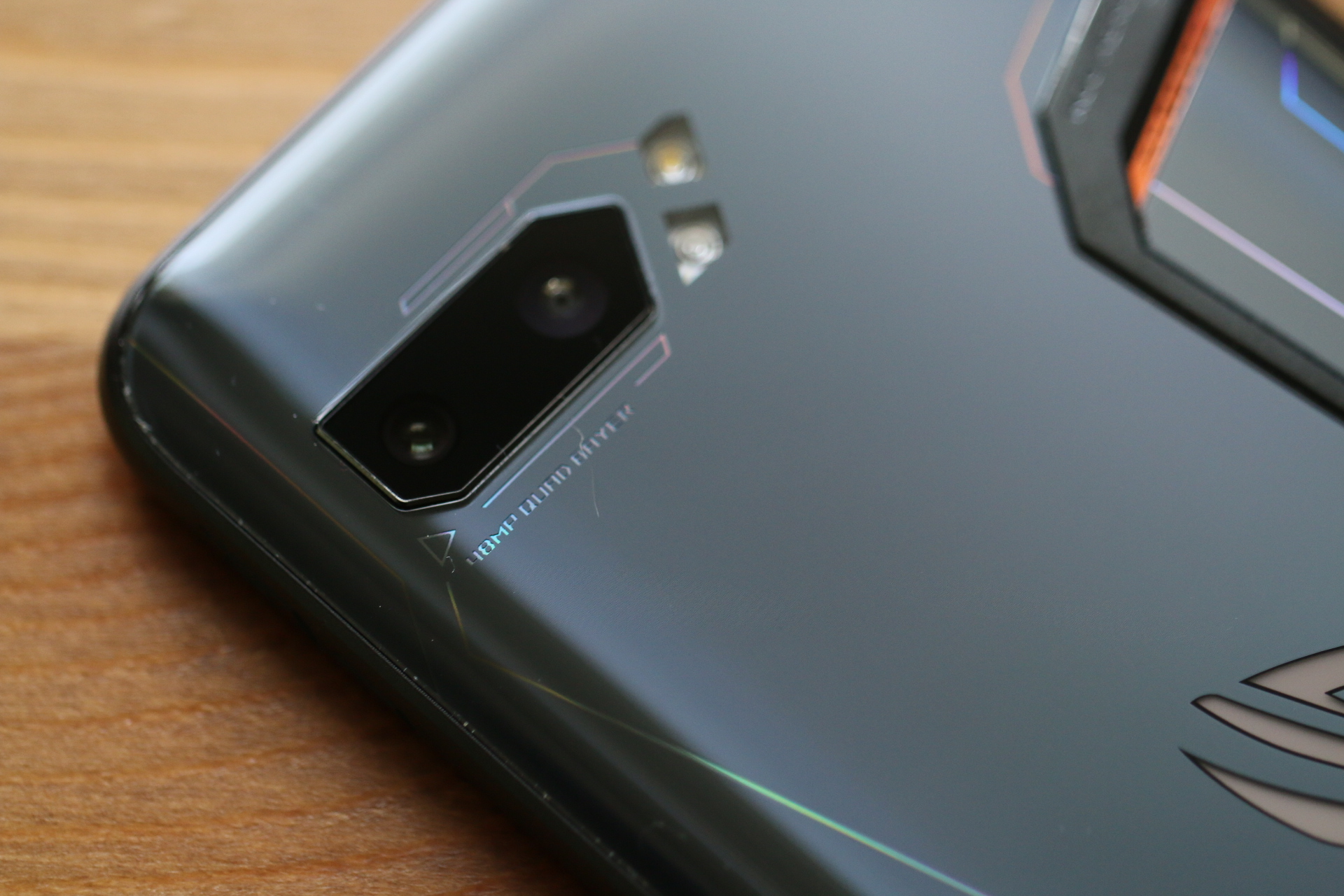 Cameras and pictures are an area where the big boys tend to separate from the other guys. You used to get what you paid for in this area, but then Samsung, Google, and Apple started putting class-leading cameras in their mid-range devices and that all changed. Now, you can get a great photography experience by spending a few hundred dollars less than flagship prices.

All that being said, if photography matters to you, you’ll want to grab one of those other devices. That’s not to say the ASUS ROG Phone II has a bad camera, but it’s nowhere near class-leading. Pictures come out cool and the lack of OIS is a real bummer when you’re trying to get that perfect action shot or shoot some video.

The ultra-wide camera is a ton of fun but the sharpness is a disappointment. As long as you don’t try to push in too much on these pictures, you’ll enjoy them but once you do, it’s a different story.

The most frustrating part for me was the over-sharpening on the main camera. Everyone seems to do it these days, and ASUS isn’t among the worse, but there have been some pictures that could have been better with some better photo processing. Are the pictures still fine for social media and sending to friends and family? Sure. But not much more than that. 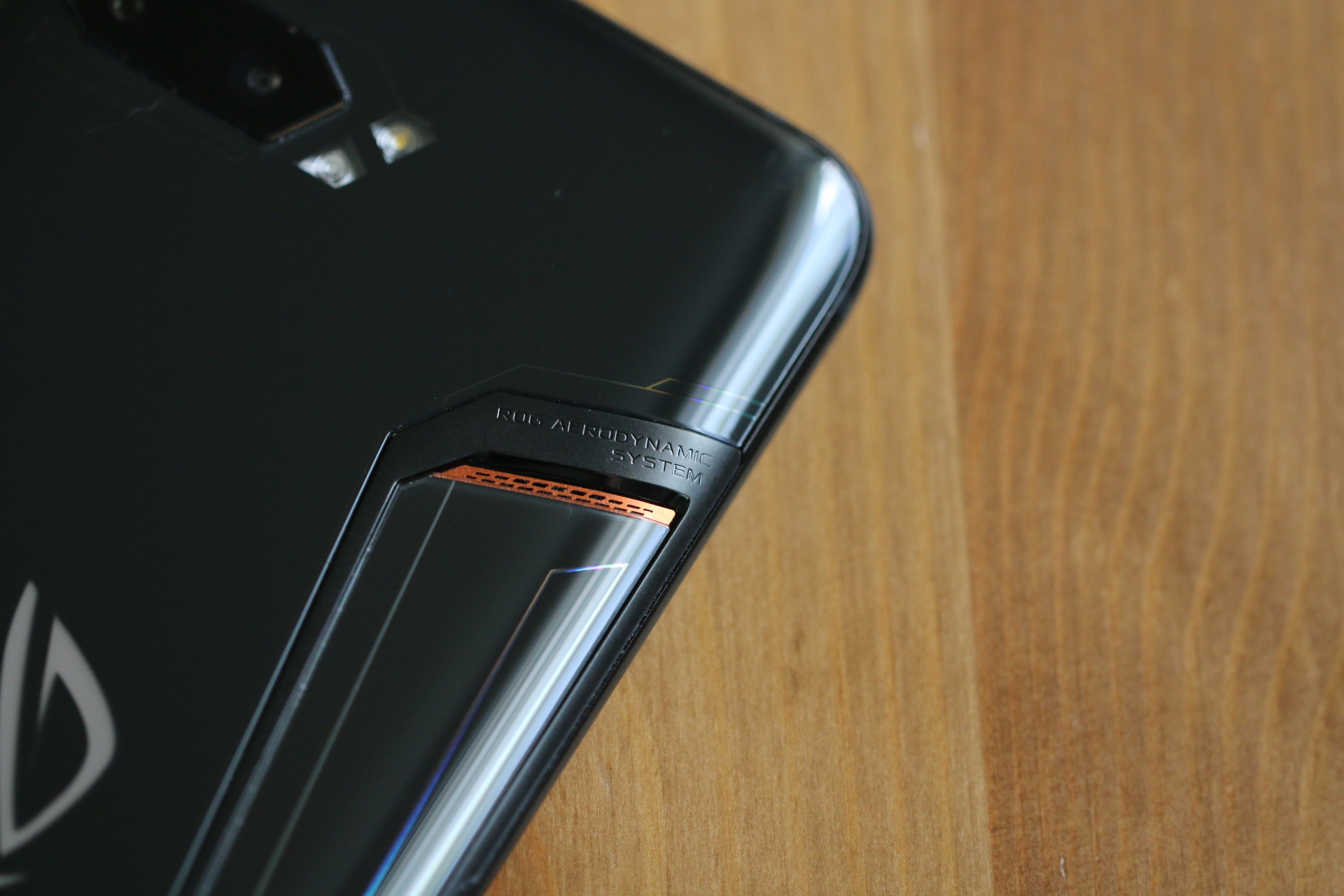 Despite its flaws, I truly believe that the ASUS ROG Phone II was the best phone released in 2019. In fact, I think its still the best buy on the market right now. If you can find one of these used or open-box for the $500-$600 price range, you should absolutely do it.

That is to say, as long as you’re comfortable using an absolutely massive phone. I can’t overstate just how big this thing seems in the hand. It’s definitely a two-hander if I’ve ever seen one.

I’m not a big phone guy, but I don’t mind it here. It’s allowed ASUS to pack in a ton of stuff I love like a 6,000mAh battery that supports reverse charging (but not wireless charging), a 120Hz AMOLED display with 240Hz touch-sampling and HDR10, amazing front-facing speakers, and a headphone jack.

I’d say this is a phone you can buy and use for years upon years as long as you’re comfortable with the software situation. I never felt a slowdown nor did I see any stuttering when using the device and I used it for well over a month. It’s flawless in that regard. Even with apps getting bigger and demanding more processor resources, I still think that the ROG Phone II will keep up with newer devices many years down the road.

The ASUS ROG Phone II is one of my favorite Android devices of all time and I can’t recommend it enough.