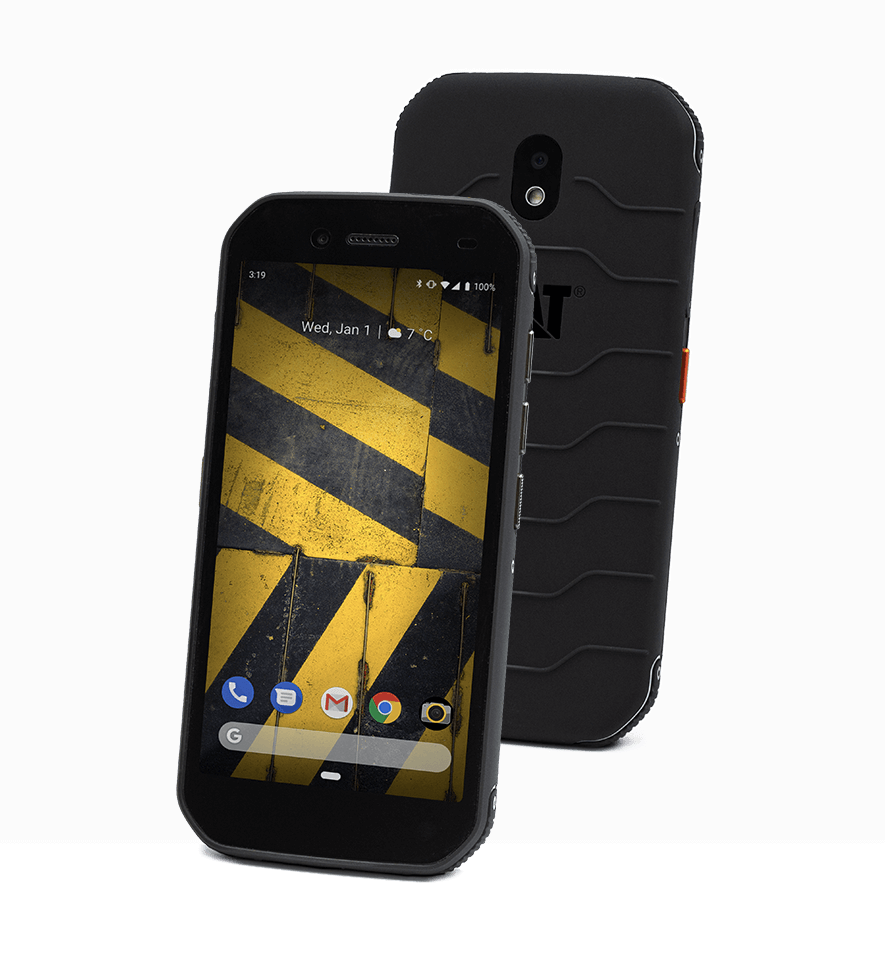 When I think of CAT or Caterpillar products an Android smartphone is definitely not the first, or even tenth, thing I think of. Bulldozers, earth movers, back hoes, and even work boots — never a phone. Alas, it does offer multiple phones, all of which are rugged and look right at home on a job site.

Its latest, the S42, is branded and sold exclusively by CAT, but the phone is actually manufactured by Bullitt Group. The same company that brought you the Land Rover phone, which you probably never heard of either. 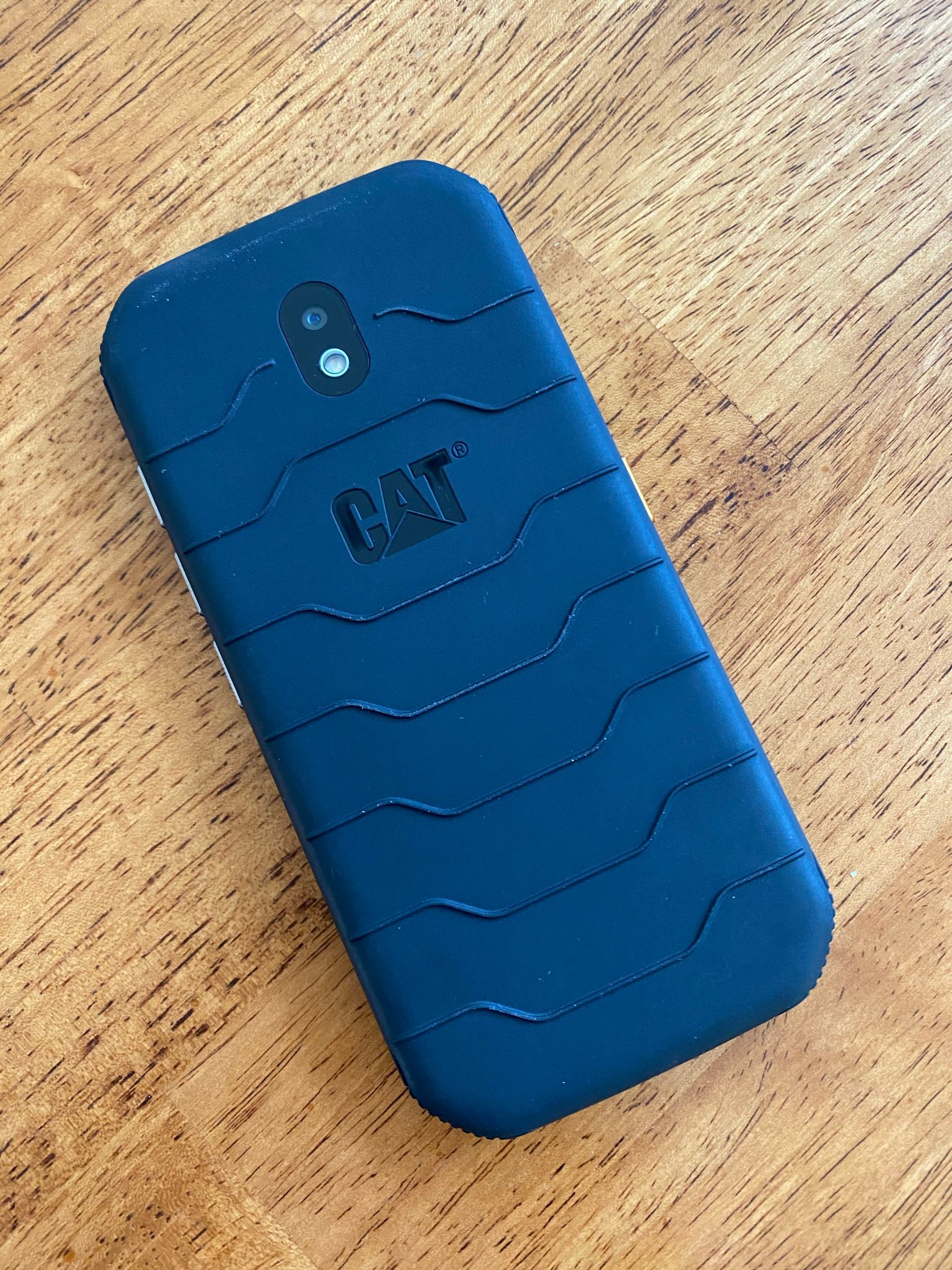 The CAT name itself implies TOUGH; perhaps even indestructible. After all, their heavy equipment painted in school bus yellow can be found in or near every construction zone I’ve ever encountered. Does their entry-level S42 live up to the company’s reputation? I spent a few days with the S42 as my everyday phone and I have a few thoughts.

Retailing at $299, the CAT S42 unlocked phone is a bargain compared to flagship phones. Even mid-level phones start in the $400-$500 range anymore. I fully expect corners to be cut in order to come in at this price point; let’s see if the right ones were made.

The S42 advertises MIL-SPEC 810H as well as IP68 rating. I wasn’t familiar with the MIL-SPEC 810H rating so I had to do some research. According to Wikipedia, the MIL-SPEC 810H is a military rating system that rates equipment on its function across environmental factors. There are standardized tests for this when it comes to construction equipment but not when it comes to consumer electronics. CAT details how they tested the phone on their website including drop tests and waterproofing.

The body of the phone is entirely plastic other than the 5.5” (1440×720) HD Gorilla Glass 5 screen. Overall, the phone measures 6.35 x 3.04 x 0.5in and weighs 7.76 ounces. Pretty thick by today’s phone standards. Keep in mind though that this phone is literally built inside a ruggedized case so you don’t have to bother with wrapping this in any additional protection. That can be good or bad depending on whether or not you like the looks out-of-the-box. I’m guessing the target market is the same men and women who drive CAT heavy equipment and wear CAT steel-toed footwear. 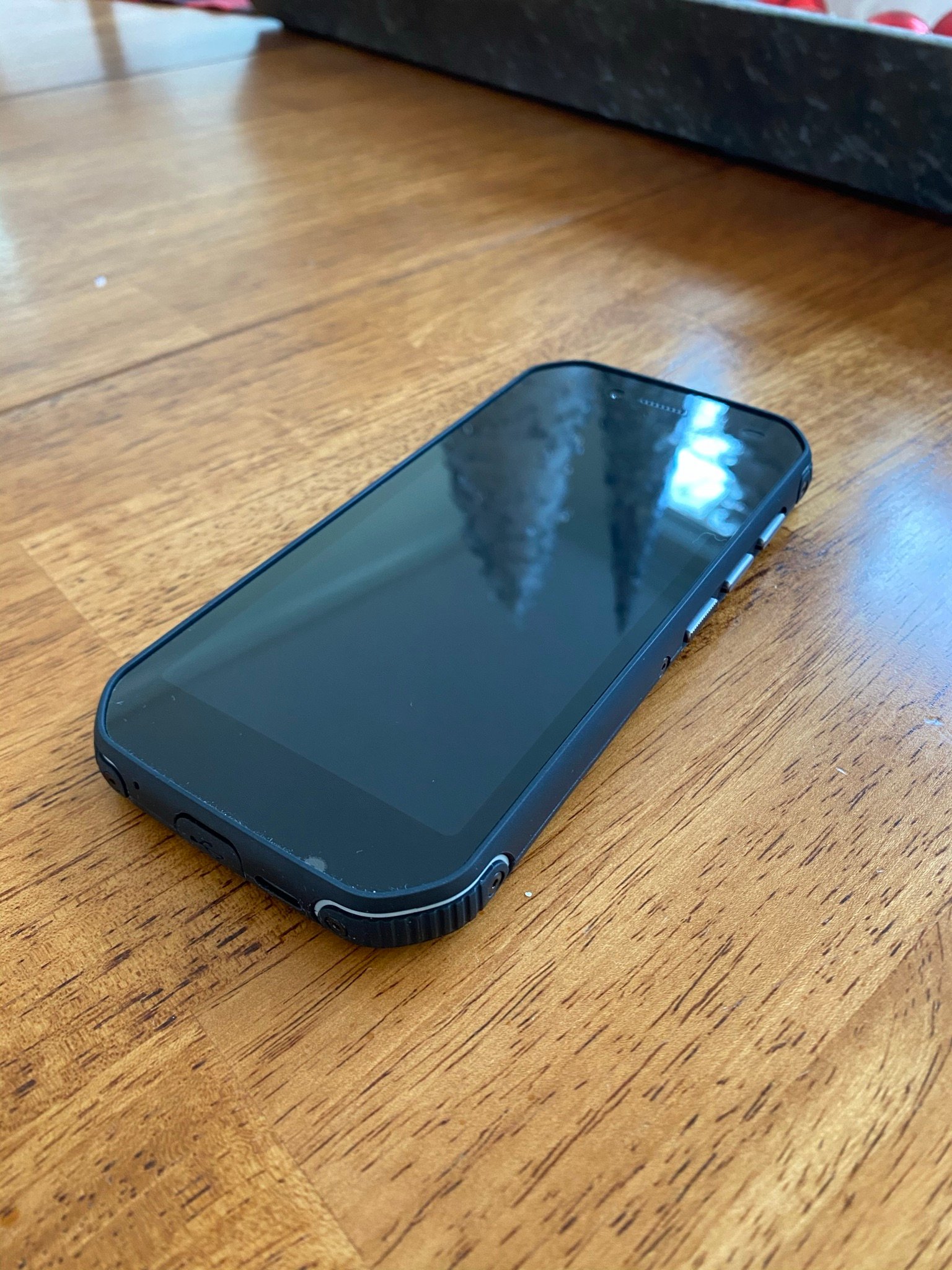 The phone features volume up/down and power buttons along the right side. A customizable button (can be assigned as a Push-to-Talk button) sits just below a rubberized flap covering the dual-sim and micro-SD card tray along the left side.

The bottom of the phone features a single speaker and covered micro-USB charging port. The top of the phone is where you’ll find a relic from the distant past; a 3.5mm headphone jack. That too is covered with a rubberized flap.

Upon loading a SIM card, you’ll receive a pop-up reminder to replace the port covers. I’m guessing that IP68 waterproof rating only applies when all port covers are in place. Not necessarily bad, but just more things to worry about if the S42 ever does find itself in water. The Gorilla Glass 5 screen comes with a pre-installed glass screen protector.

The rest of the specs are as follows:

The CAT S42 ships with Android 10 in its pure form without any skins or overlays. It does come pre-loaded with CAT Toolbox software as well as the typical Google Android portfolio of apps (YT Music, YouTube, Gmail, Chrome, etc.). I’m guessing if you are buying an Android phone, you expect that Google is going to load it up with their suite of mobile applications. 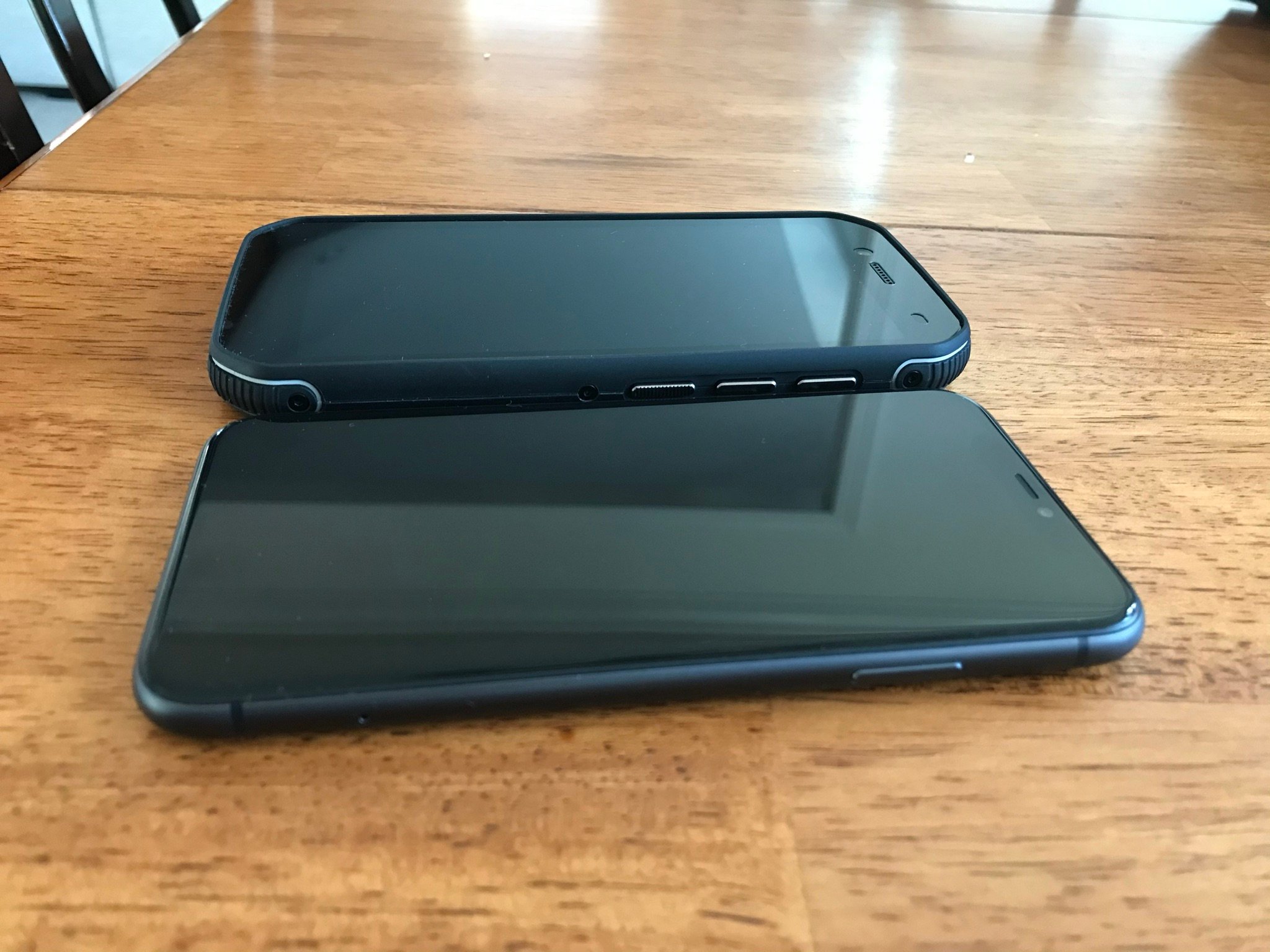 The phone also comes pre-loaded with Zello which allows for Push-to-Talk (PTT) functionality (sign-up and subscription required). I didn’t get a chance to test this out because honestly, I don’t know anyone who would prefer a walkie talkie like communication experience.

I haven’t used that feature since I owned a Nextel phone in the early 2000’s. I’m guessing industries served by PTT capabilities already have some sort of enterprise account for their end users. I assume that the PTT button can be programed to take advantage of any number of personal or enterprise PTT applications/services.

There are a handful of other pre-installed apps that the user may appreciate or at least appreciate that they are easily uninstalled.

Admittedly, I am an iPhone user. My current everyday phone is the iPhone 11. Unfortunately, the performance of the CAT S42 will be judged with a level of unconscious bias. 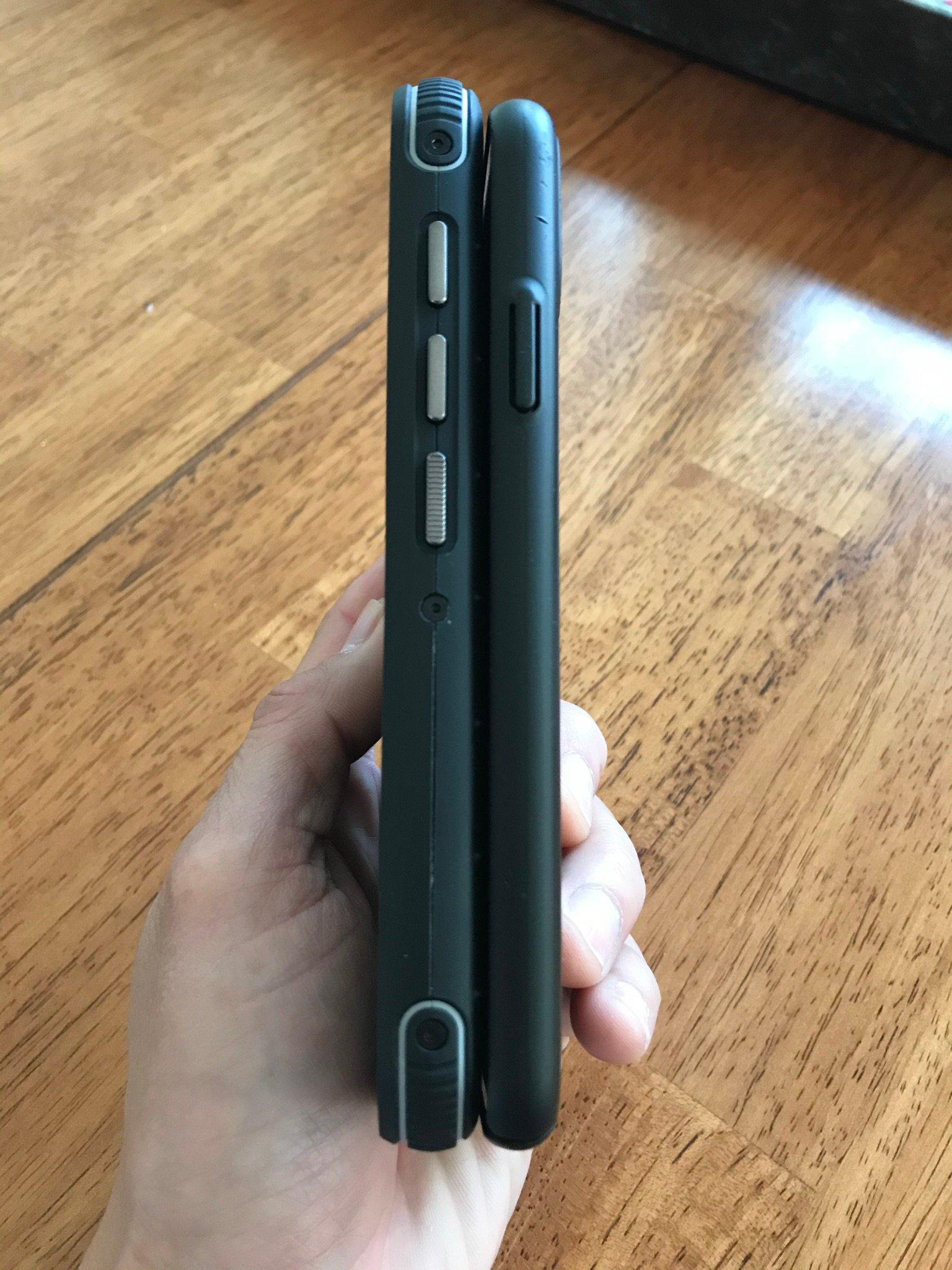 Let’s start first with battery life. The CAT S42 kicks my iPhone’s butt in this department. I’m reaching for my charger typically after 13-14 hours of usage. I don’t consider myself a heavy user but I do use my iPhone for work calls, social media apps, limited gaming (Words with Friends) and camera. The CAT S42 lasted ALL day! Not just all day, but about eight hours into the next day, even despite the fact that I used GPS for at least two hours, music, web browsing, social media and camera functions. I was seriously impressed.

The CAT website boasts two days of battery life and I think that a typical user, not trying to put a phone through its paces, would probably get near that. The phone also supports quick charging so I can’t imagine having dead battery anxiety with this one the way I occasionally do with my iPhone.

I have no experience with mobile CPUs other than Apple. All of my previous Android phones featured Qualcomm Snapdragon processors. I wasn’t sure how the Mediatek Helio A20 MT Quad core processor would perform compared to high-end chipsets.

Again, I was pleasantly surprised. The CAT S42 was responsive and I didn’t notice any lag in opening apps, web browsing, etc. The only issue I had was with the actual phone app when attempting to navigate an automated call system menu. The number pad locked up and I wasn’t able to select “1” to proceed in English. I rebooted the phone and no issues moving forward.

LTE connectivity was fast as expected. WiFi was speedy. Screen response was adequate. I don’t play games or watch movies which would require higher frame rates so I can’t say that it would be ideal for those purposes but I’m guessing the target market for this phone wouldn’t care either.

The only feature I find lacking on the CAT S42 phone is its camera. I didn’t attempt any videos but it is rated at 1080p at 30fps. Your next independent film isn’t going to be made on this phone. Outdoor photos are fine. You’ll be able to make out what you are shooting but the colors are flat and even with HDR, photos lack any discernible dynamic range. Indoor photos rely heavily on the LED flash and any motion whatsoever will produce blurry results.

I only spent a few days with the CAT S42 as my primary device and I’ll admit that I was not only pleasantly surprised if not impressed with it. The phone does many things well. Especially when you consider the retail price is only $299. Battery life is its strongest attribute along with its physical durability. I didn’t purposely drop the phone but the CAT website boasts it will survive a six-foot drop on steel. I didn’t test its waterproof rating either. The IP68 rating indicates it will survive prolonged submersion in water beyond one meter.

The only drawbacks or weaknesses in my opinion are its physical size and its camera capabilities. I can see myself occasionally grabbing the CAT S42 when I plan an activity that might damage a more expensive phone. It also might be a good device for a new parent who occasionally allows their toddler to watch videos or play games on their phone. One of my earliest smartphones was destroyed when it found its way into the mouth of my teething daughter.

OnePlus never seems to disappoint in offering its fanbase consistent refreshes of phones. The latest to enter the lineup is the OnePlus 11 5G....