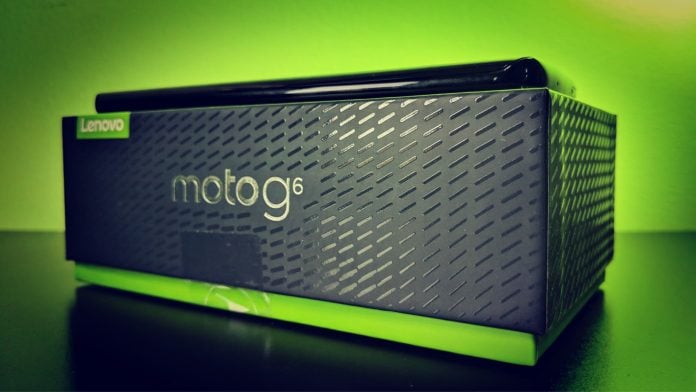 It’s Motorola season in the world of smartphones. As of the time we’re putting together this review there are multiple devices sprinkling out into various pockets of the world. Moreover, there’s another model just emerging from behind the curtain in the form of the Z3. Today, though, we’re talking about the Moto G6.

We’re huge fans of Motorola, and always appreciate when it delivers a new phone. For starters, we love the way it leaves Android almost completely untouched. Additionally, we like the price point of its devices.

Let’s take a look at the Moto G6 and dive into our impressions. Note that we have had the review unit for a few weeks now, going back and forth between it, our main phone, and other devices.

Interestingly, the phone says “Motorola” on it where previously it would have simply said “Moto”. As a sign of where things are going, at least for the time being, it feels like a new vision while not diverging from its predecessors. The G6 comes across as very much like its forebears with a hint of “new” in the process. 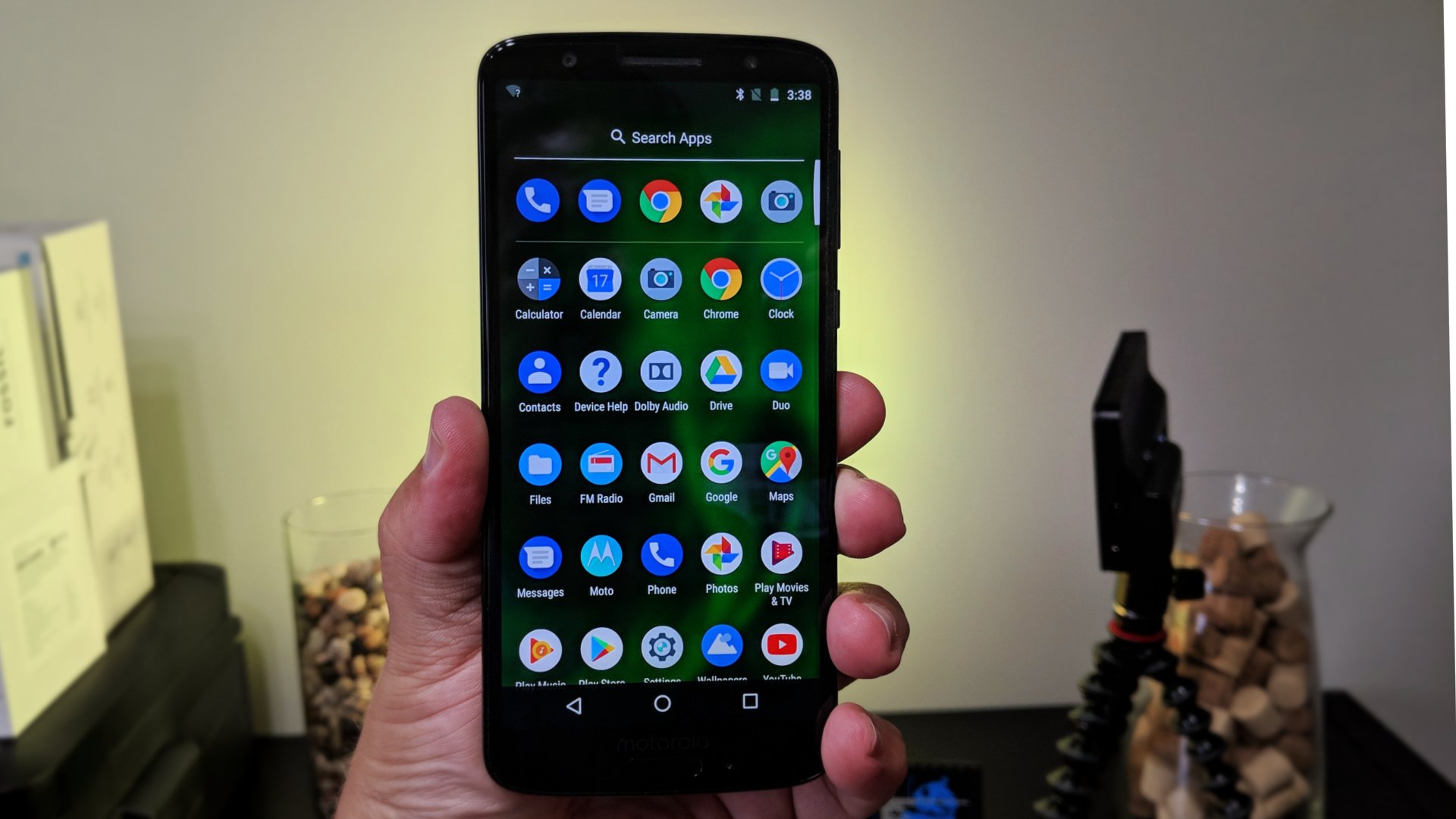 Does this phone signal that Motorola is heading off on a different trajectory? Not quite. There’s a lot here that’s familiar and par for the Motorola course. As to why the name change or branding adjustment, we’re not sure what’s up there.

For lesser demanding users, AKA the Moto G6 target demographic, the hardware is sufficient. We don’t see any reason this package couldn’t last two years for its user base.

Priced just $250 at launch (now just $230), the phone has the appearance of a more expensive device. Maybe we’re still somehow conditioned to think that this price tag means cheaply constructed or plastic materials. Whatever it is, we like the physical look and feel of the Moto G6.

As it pertains to layout and construction, it’s much like anything else from the Motorola camp these days. And, really, it’s not all that ambitious or different from competitors.

On the right edge (facing the screen) of the phone you locate the volume buttons, and just below that, the power button. There’s a knurled pattern etched onto the power so it’s easy to identify in the dark or without glancing.

Tips & Tools: How to optimize your Samsung Galaxy Note 9

Speed up your Android phone with these eight essential tips

Find it with your thumb and you can slide up just smidge to get the volume rocker. All buttons responded very nicely to the touch, providing solid feedback. It’s quite obvious as to whether or not you’ve pressed them.

You won’t find anything on the left edge of the phone. Up above is the SIM card and microSD card tray whereas the USB Type C charging port and 3.5mm headphone jack are down on the bottom edge.

Below the screen you find one hardware button. It works as a fingerprint sensor but also for multiple functions across Android. Indeed, it can be used for back, menu, and home. Though it’s not enabled by default, it is a nice alternative to the standard navigation used for the platform. If it’s your first time using Android, it’s easy to learn; for seasoned owners, it’s fairly easy to learn but sometimes awkward.

Around back is the dual camera configuration which is nested in the upper center of the phone. Just below that is the stylized Motorola logo. It’s printed into the finish and doesn’t have any edges or texture to is. 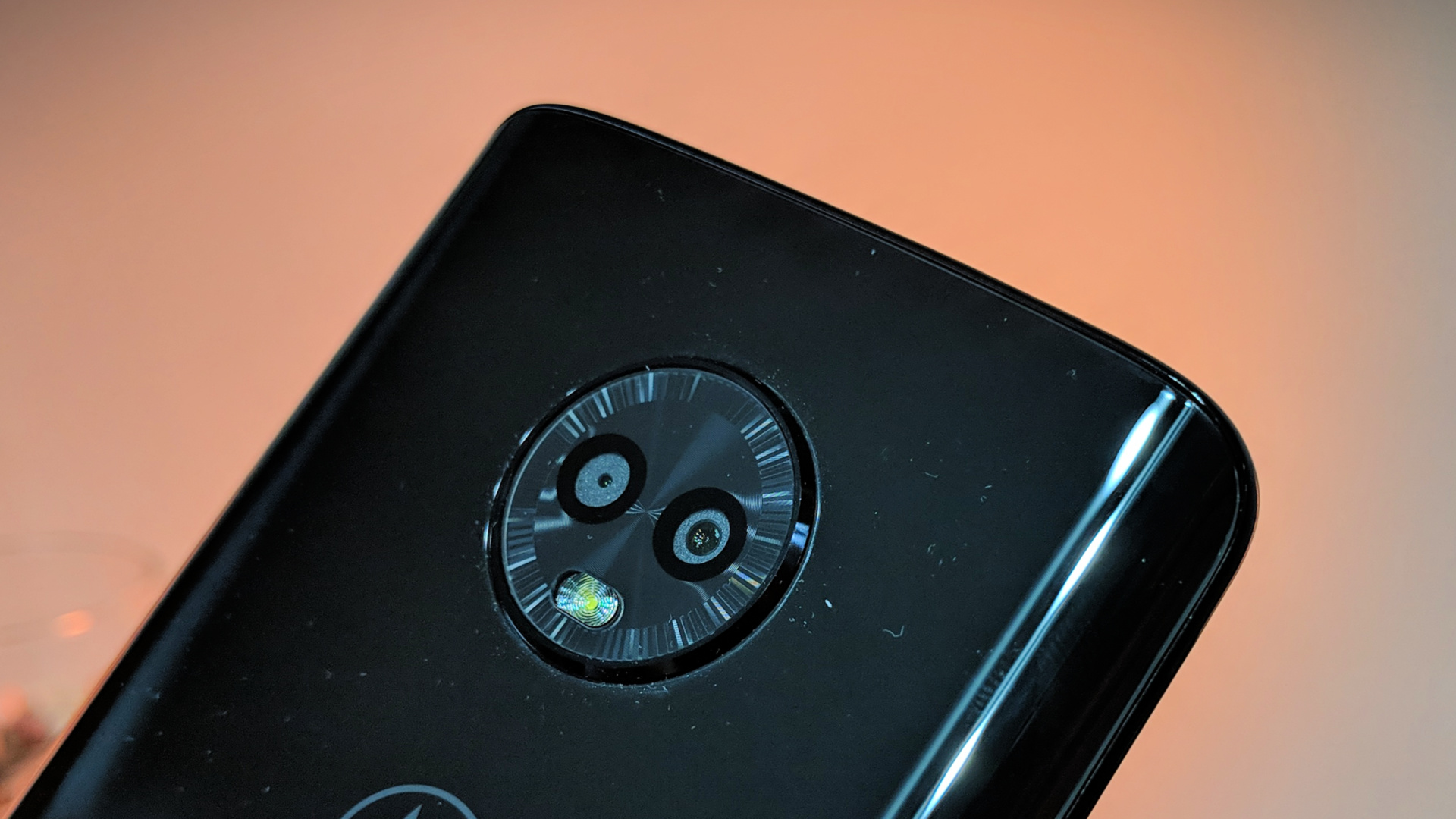 The Motorola Moto G6 is built with a shiny but durable glass material. Reflective, somewhat slippery, and easily broken, it gives off the appearance of a phone that costs more than it does.

The glass gives off an attractive shine and catches light in ways that draw the eye in for a closer look. On appearance alone it’s hard to imagine this handset being as budget friendly as it truly is.

The Moto G6 is a little bit slippery to the touch, and it likes to pick up oils and smears from your fingers. We found ourselves wiping it with a shirt or against a pant leg out of habit and wanting to keep it clean.

The color of our review unit is “Black” but we felt like it’s almost a really dark grey and silver at times. Black is a pretty accurate term, but you could have convinced us that it was Slate or Midnight Pewter.

The Motorola Moto G6 has a a 5.7-inch display with an 18:9 aspect ratio, meaning it fits in hand nicely. At this size it also packs plenty of space for text and photos.

The curved back and edges deliver an experience that’s easy to hold. Whether you’re dealing with one hand or two, the phone is comfortable and inviting.

A mid-range phone to be sure, the Snapdragon 450 processor is complemented with 3GB RAM. We’re now at a point where this is the acceptable amount of memory and processor to suffice in a daily driver — just as long as you’re not looking for blazing speeds and benchmark busting numbers.

Does this mean the Moto G6 is slow and sluggish? For most users, that’s probably not the case. The more data-heavy apps, flashy games, or larger files might hinder performance but day-to-day stuff is alright.

Given we tend to use flagship and high-end devices as our daily drivers, we happen notice the slowed performance. It’s not all the time, but often enough that we were reluctant to throw our full suite of everyday apps and games on it and go all-in right out of the gate. 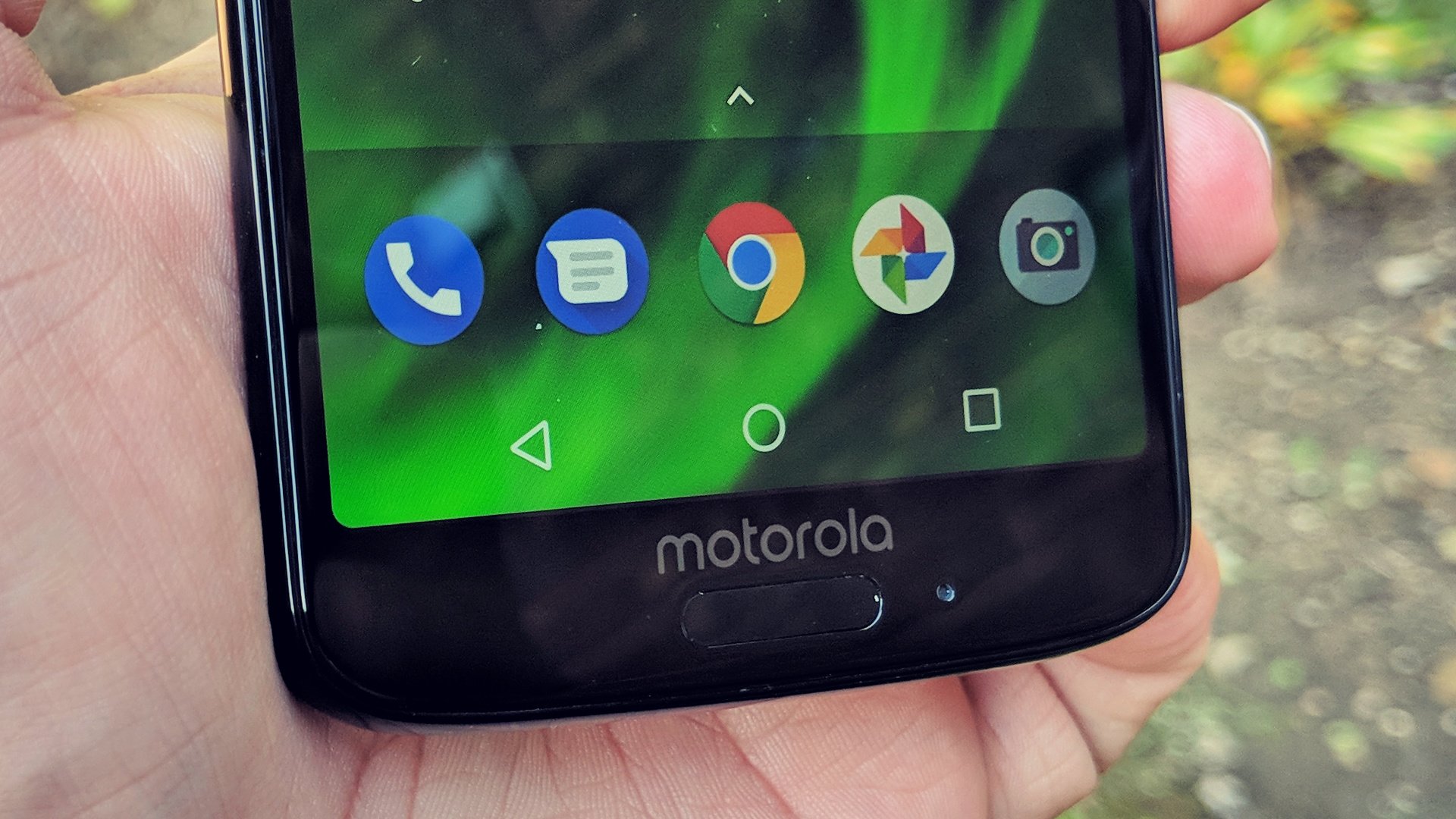 Most apps and games worked as expected, but some were a touch slower to open. We suspect that a typical user wouldn’t catch on to anything. Nothing happened that gave us pause or caused us any real frustration.

Given the Android build is almost untouched, there’s no lag for custom Motorola touches or enhancements. We’ve seen phones, even on the higher end, that feel like they chug or sputter from time to time. It’s usually the “skins” or branded experience that use more resources. We’re happy to say that’s not the case here.

The 3,000mAh battery is rated to last one day, per Motorola. That’s right in line with other phones with similar capacities, but just under what we qualify as a “day’s” worth.

Depending on how early you start your day, and how much you use your phone, the Moto G6 could end up going the distance. But, for us, it tends to get to around 25 percent come the end of a work day. Not to worry, though, the phone charges up quick.

Put the Moto G6 on a charger for about 15-30 minutes and you’ll have more than enough to end your day, regardless of where you were. The TurboPower fast-charging system via the USB Type-C is always awesome to have. 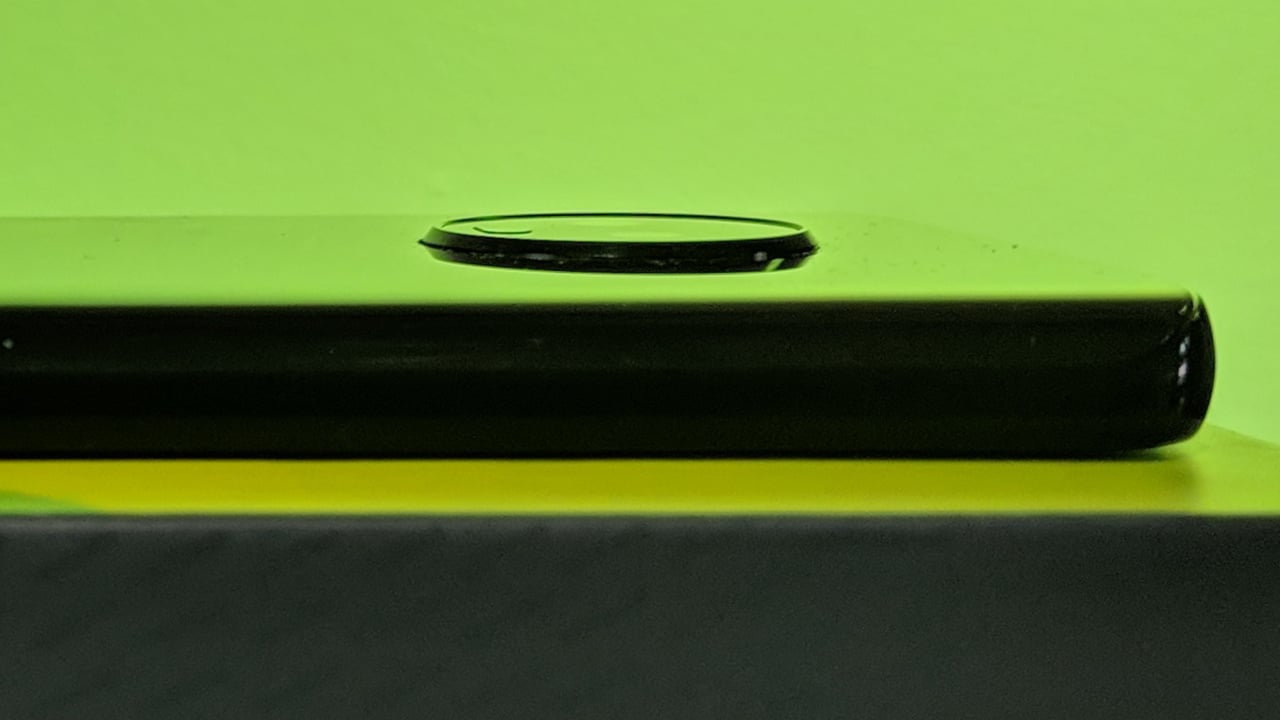 The dual-rear camera setup takes great photos but it’s not like what you’ll find on the Pixel 2 or OnePlus 6. Then again, you’re also not spending that sort of money. What you do get, though, is a consistent experience that’s more than worthy of social media and sharing.

The “active photos” is a nice touch that captures a smidge of video before and after you take your picture. It’s not unlike what Google, Apple, and others are starting to do with their cameras.

The camera app is easy to use and there are plenty of options to play with, including spot color, panoramic, face filters (think Snapchat or Instagram), and portraits. In terms of video, you get slow motion, timelapse, and face filters. 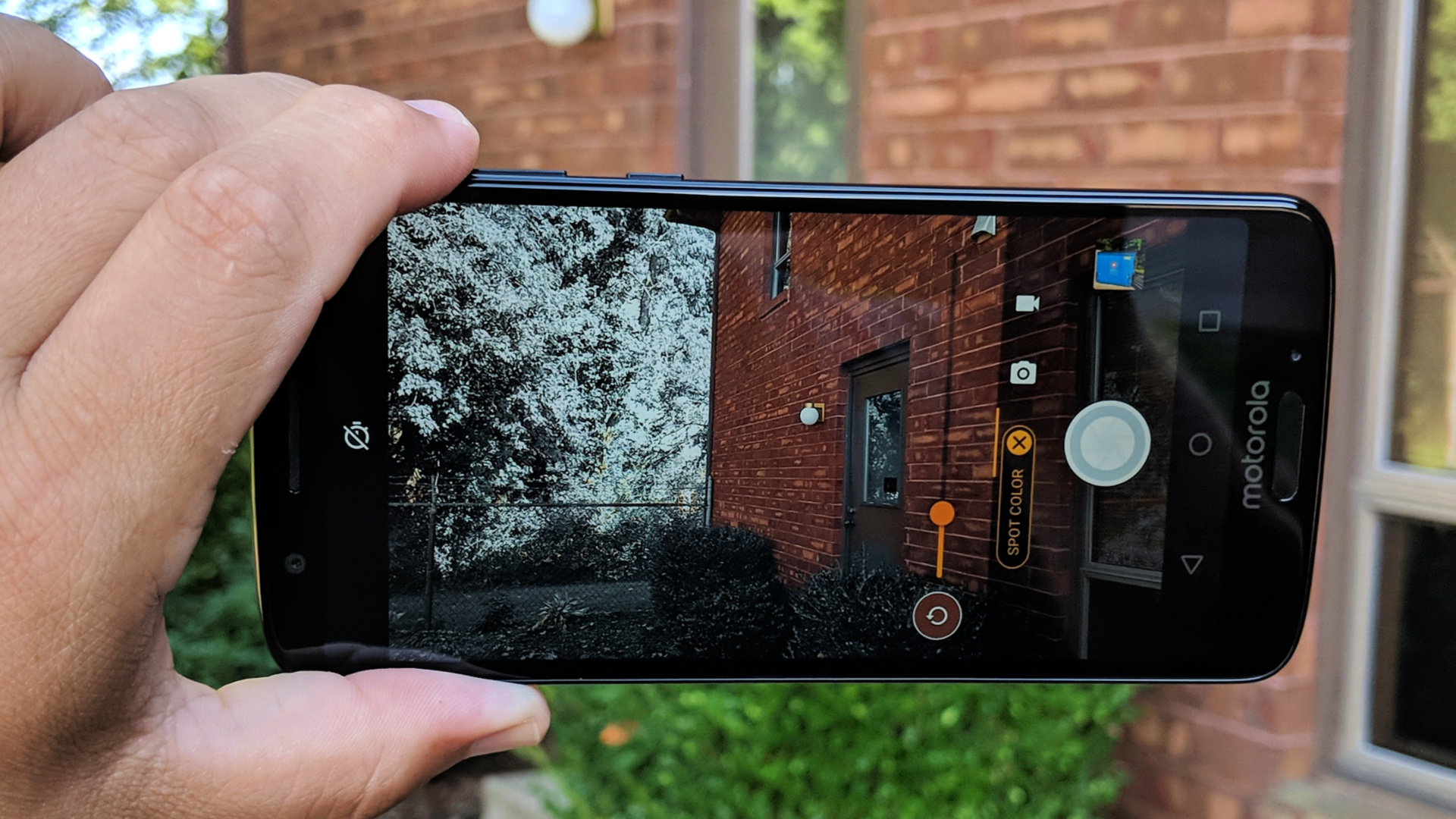 Using the two sensors, portrait gives users the ability to selectively determine the focal point. It’s the little blur that has your subject popping off the background; it’s possible to adjust this after your picture is taken, too.

Like other modern phones, the Motorola Moto G6 employs artificial intelligence to identify subject and objects. Landmarks, food, text, and other things each get a slightly different tweak ahead of taking the picture.

We really admire the Moto G series of phones. In fact, it’s one of our favorite models year in and year out. The 2018 is exactly what we had hoped for, meaning it’s a lot of handset for the money.

As much as it makes sense to see flagships and big-budget phones across multiple carriers, we’d appreciate having these there, too. Understanding that a lot of pre-paid and second-tier service providers offer the Moto G6, we think it would be well-received at the bigger carriers. 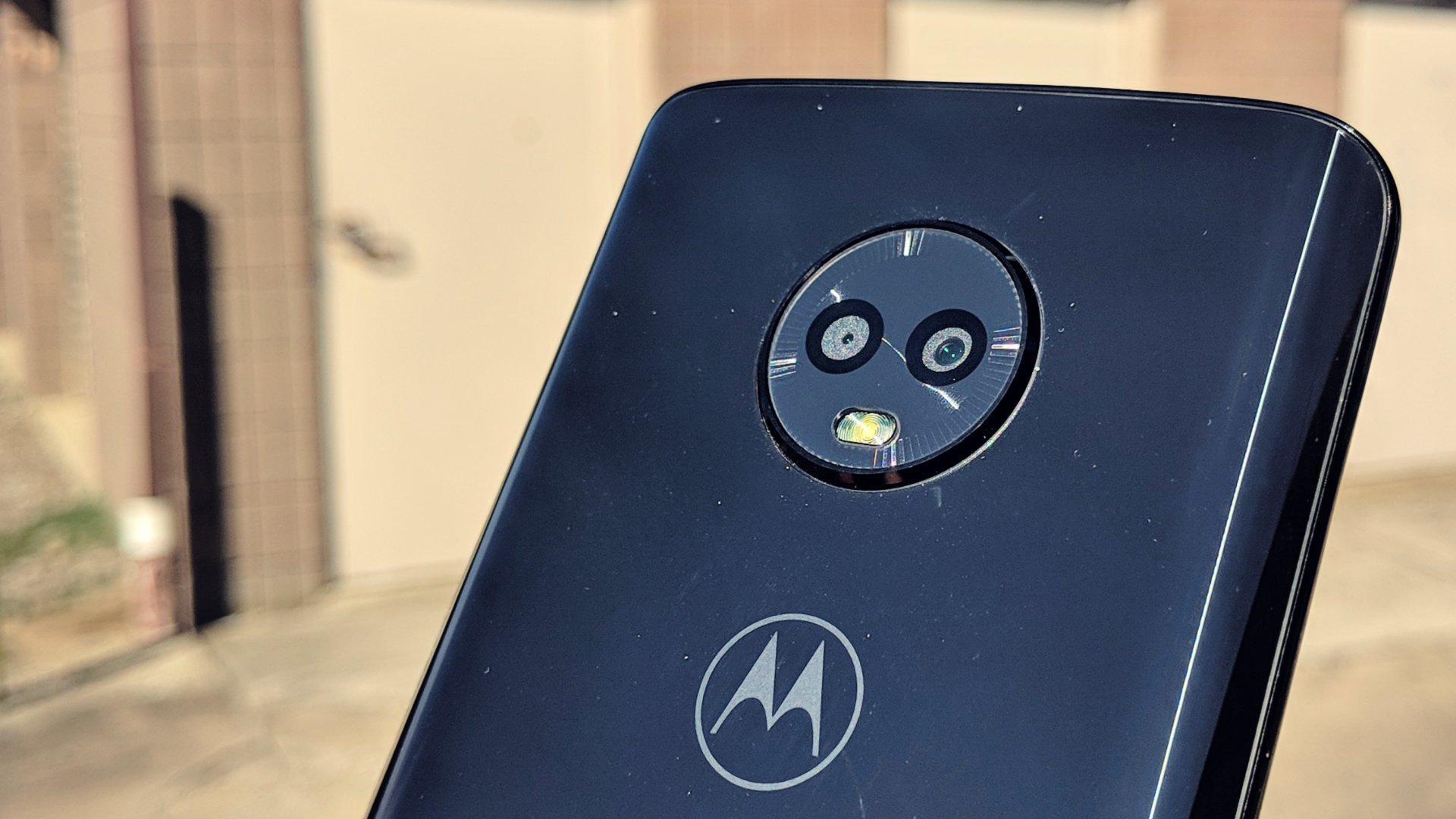 We’re always a fan of the stripped down Android experience and Motorola does just that. You get a very recent version of Google’s operating system with only minimal extras. Moreover, they’re opt-in, meaning you don’t have to employ anything fancy or custom.

If you’re on the hunt for a wallet-friendly affair that’s got enough oomph to handle your daily tasks, the Motorola Moto G6 should be on your short list.