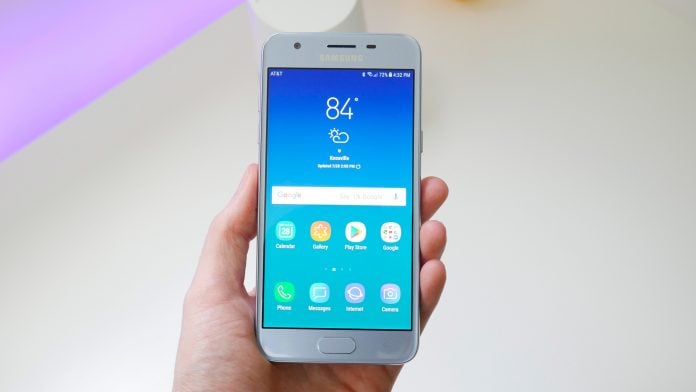 Samsung is most well known for their flagship phones such as the Note 9 and Galaxy S9. However, they also make many other phones including more affordable entry-level phones. The Samsung J3 2018 and Galaxy Express Prime 3 loaned to us courtesy of AT&T are prime examples of that.

While known by two different names these two phones are one and the same. They share the exact same design and specs, only differing in two areas which I’ll touch on at the end of the review.

There is nothing extraordinary about the design of the Samsung J3 2018 or Galaxy Express Prime 3. That’s not surprising for an entry-level phone in this price range. The front features a 5-inch 720p LCD display with vivid colors and is bright enough to be viewed outdoors. Overall the display looks good and is proof that a low-resolution display doesn’t mean it is low quality.

Similar to previous generations of Samsung phones they both include a home button flanked by two capacitive buttons for navigation. Unsurprisingly, there is no fingerprint scanner in the home button nor is there one anywhere else on these phones.

Another frustration is the absence of lights for the capacitive buttons making it more difficult to use in dimly lit or dark rooms. Especially since Samsung reverses the order of the recent apps and back buttons from stock Android.

Both phones have a plastic build and feel solid in the hand with a removable back. Stored away behind this back panel is the nano-SIM slot, microSD card slot, and removable battery. With only 16GB of storage, it’s a good thing the microSD card slot supports cards up to 400GB. I was constantly getting warning messages about being out of space, 16GB doesn’t go that far these days. 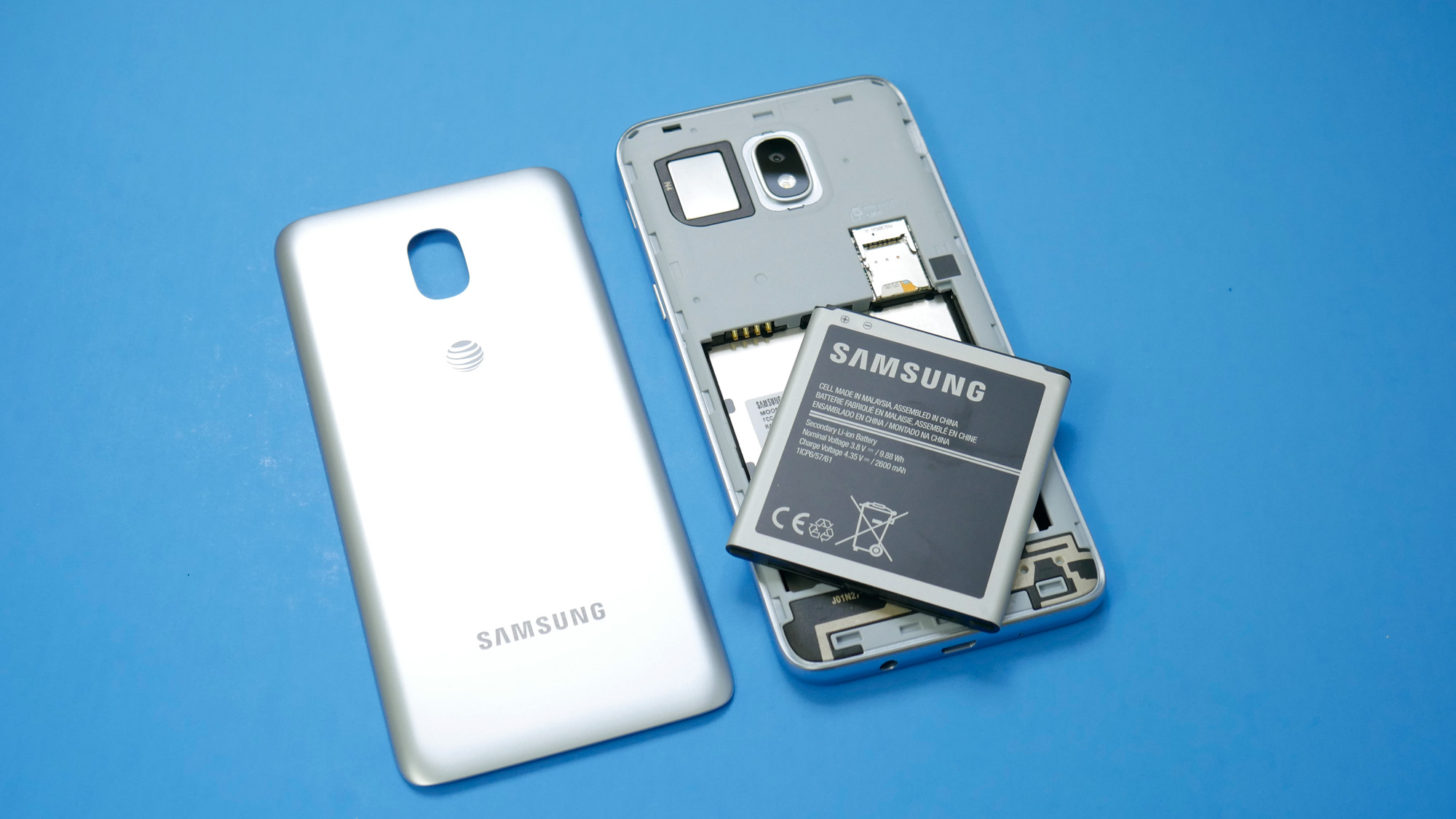 One design element often overlooked is the placement of the speaker. I’m happy to say the J3 2018 and Galaxy Express Prime 3 placed it on the right side instead of the bottom. Now sound won’t be easily muffled by your hand in landscape mode.

Holding the phones was easier and more comfortable without having to worry about covering a bottom firing speaker. Another positive is the inclusion of the headphone jack, thankfully Samsung is one manufacturer who hasn’t nixed it. Although in general, most entry-level phones have not removed the headphone jack. 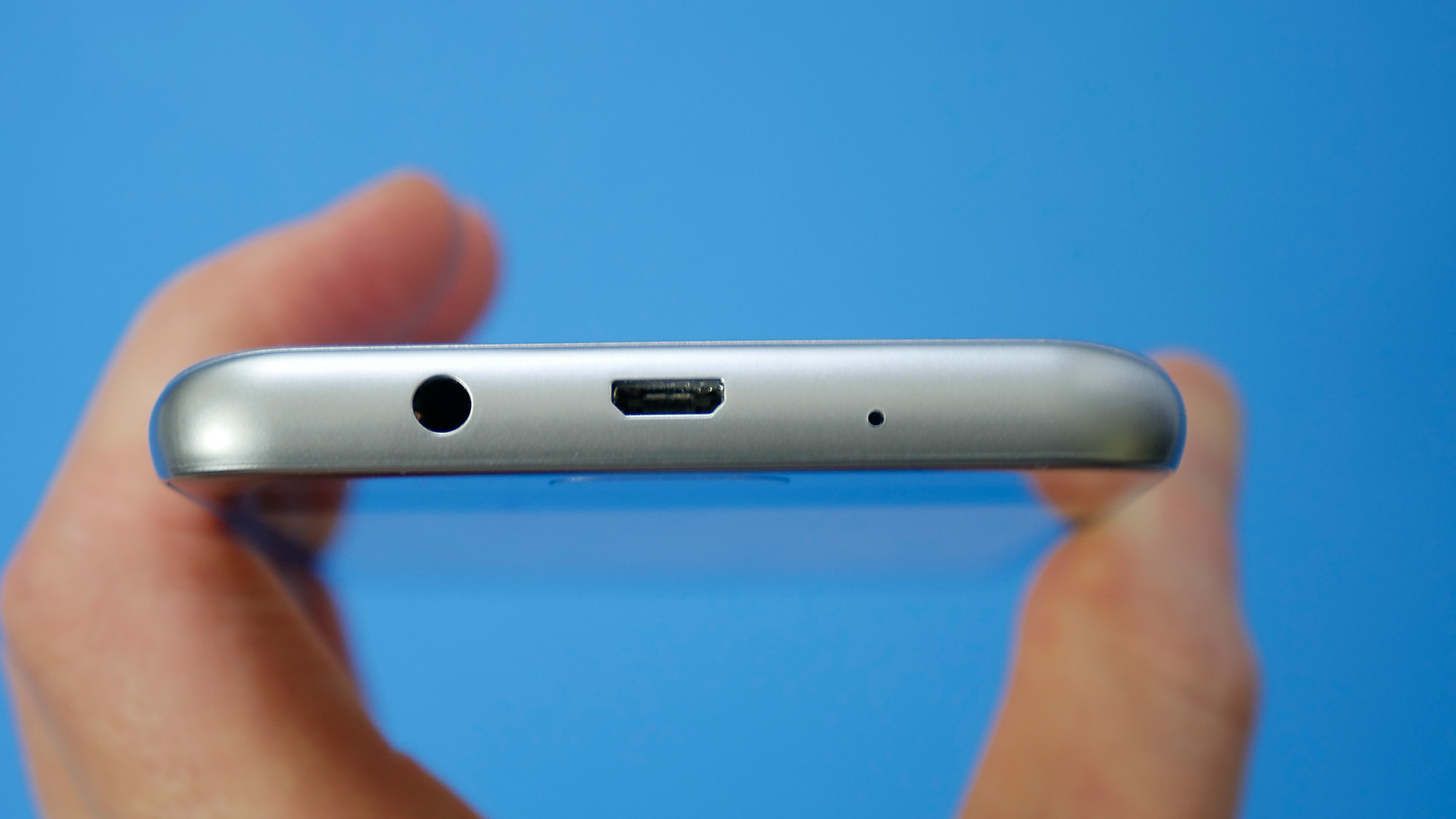 Speaking of legacy ports, the J3 2018 and Galaxy Express Prime 3 still use the outdated micro USB standard. In a mobile world that where most phones have moved to the USB-C standard, this is quite disappointing. For users who have not made the switch to USB-C and don’t want to invest in new cables, this will be a positive, however.

The J3 2018 and Galaxy Express Prime 3 are running Android 8.0.0 Oreo out of the box along with Samsung’s typical thick skin overlay. Samsung phones have always made changes to the UI and added features to provide their own Android experience. Despite the lower end hardware they still do a good job of providing many of the same features you’d find on Samsung flagships.

For example, you have access to the theme store, secure folder, dual messenger, shortcuts for the camera, and one-handed mode, options in game mode to block notifications, and more. However, I ran into an annoying issue that prevents you from syncing your Gboard personal dictionary because of secure folder. I was also dissatisfied to see that night mode is missing from the display options.

Believe me when I say the lag is real on this phone. That shouldn’t be surprising considering they are both powered by Samsung’s in-house Exynos 7570 quad-core 1.4GHz processor and 2GB of RAM. These are far from flagship phone specs and it definitely shows when trying to multitask or play games.

Loading of most smaller apps isn’t that bad, it really only becomes frustrating when opening games. What makes it even worse is due to the paltry sum of RAM, you’ll often have to wait for the games or apps to reload if you switch apps.

Without optical image stabilization photos have a higher probability of coming out blurry. Also, regardless of how steady your hands might be, there will still be a significant amount of noise in low light images. 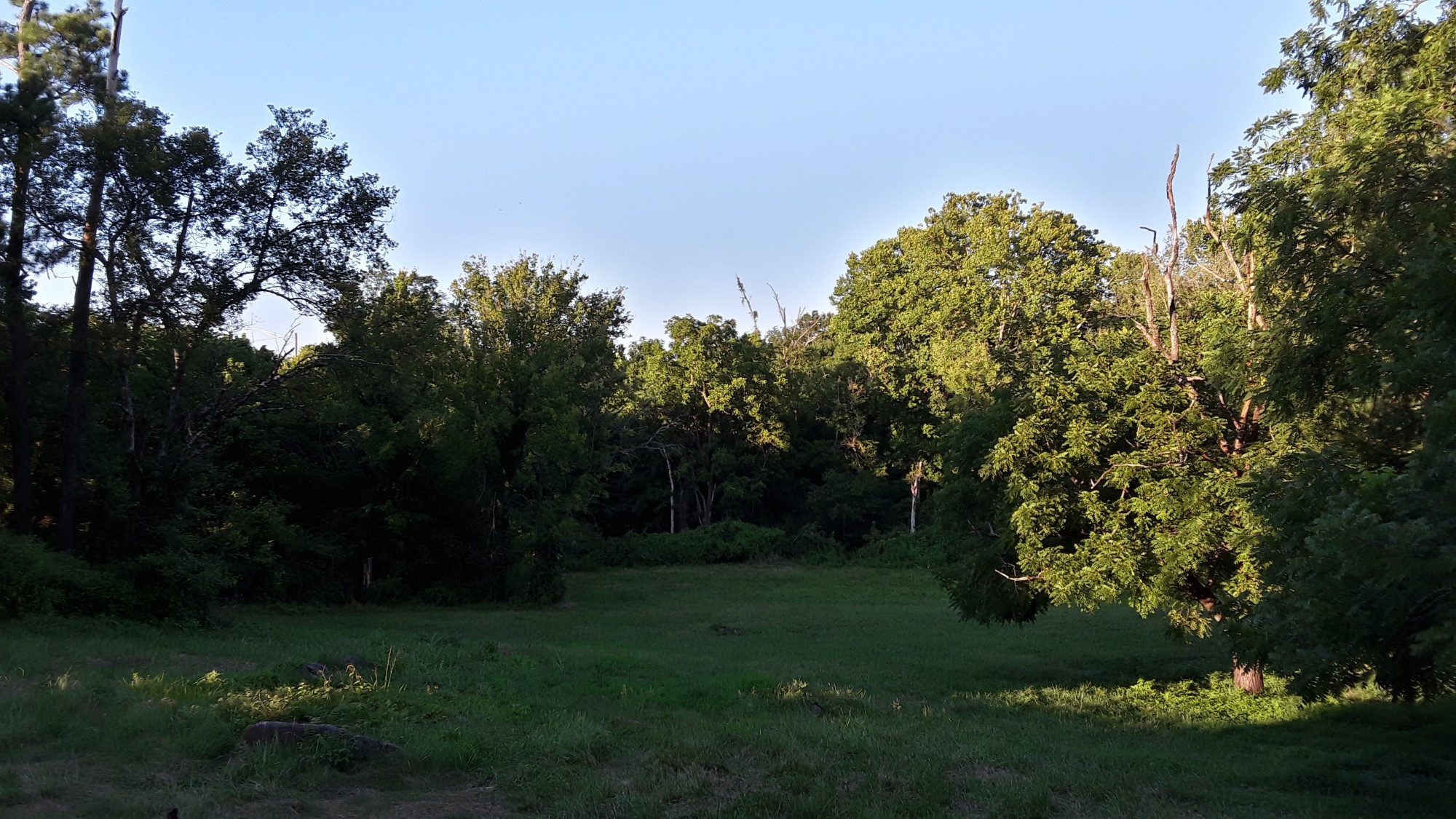 Photos in daylight are better but still not fantastic because of a lack of dynamic range. While the J3 2018 and Express Prime 3 provide an HDR mode it still doesn’t balance out the exposure that well.

The HDR photos often leave you with halos around objects. Not to mention the patience you’ll need while it takes a few seconds for the HDR photos to process. Overall, it’ll work for snapshots but don’t expect anything too breathtaking from these cameras.

On the bright side, the camera does offer some useful shooting modes besides HDR such as pro, panorama, night, and sports. The front-facing camera also includes a selfie mode with beauty filters and a wide selfie mode.

The results of the front-facing camera are more disappointing than the rear camera because of the lower megapixel count and larger aperture. Your face is never quite clear and the background can look even worse.

Battery life is one area where the Samsung J3 2018 and Galaxy Express Prime 3 shine. I was easily able to get 5 hours screen on time with plenty of juice leftover in a day. While with more light to medium usage I was able to go two full days before needing to charge. Another added benefit comes from the replaceable battery making it easy to swap if you’ll be away from the charger. 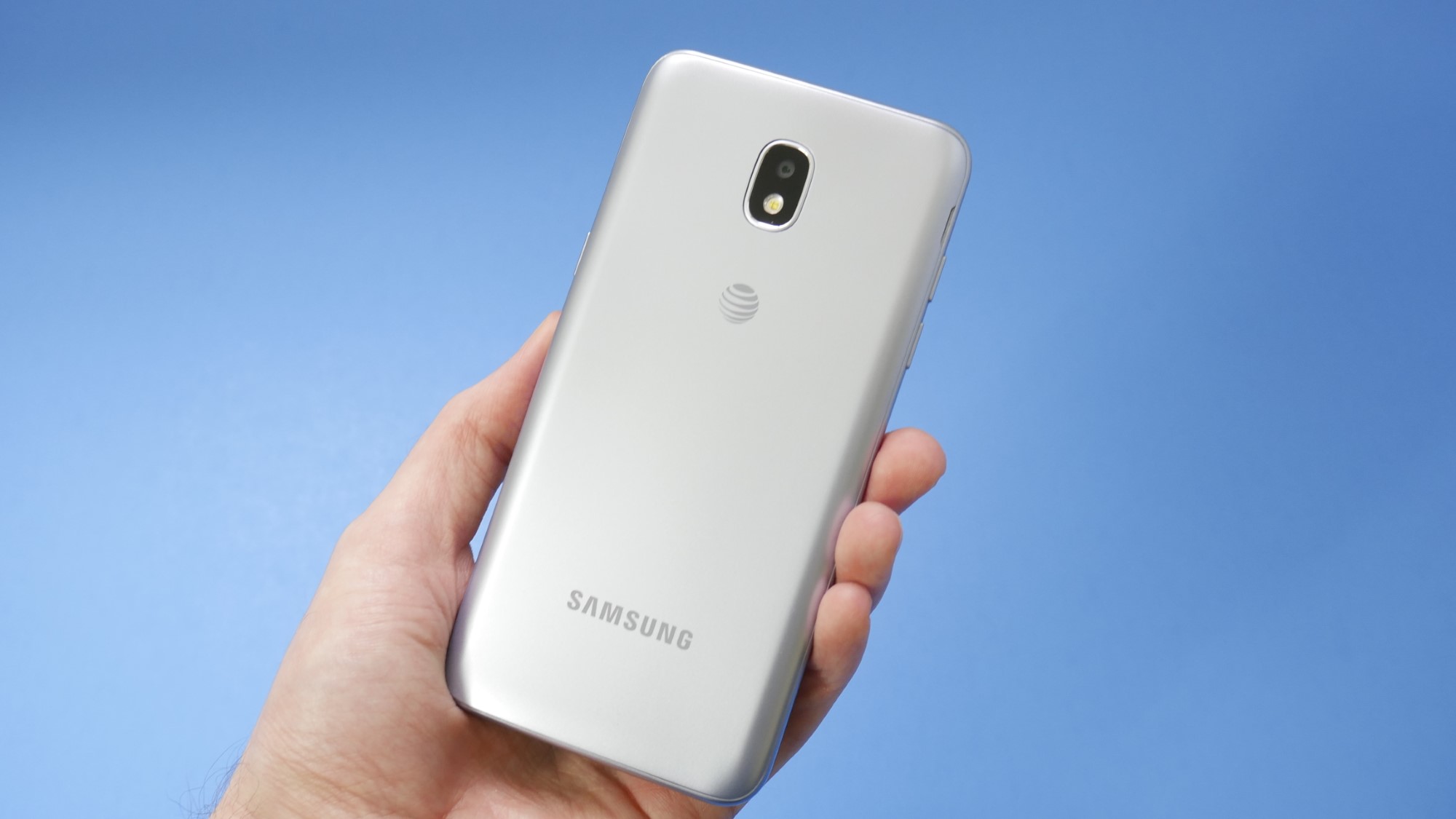 However, the experience will be subpar and I wouldn’t recommend them for multitaskers, gamers, or those who expect more from their phone. While both of these phones are essentially the same the only area they differ in is availability and price.

The Samsung J3 2018 is for postpaid customers on AT&T and will set you back $210. At that price, it’s not exactly a bargain. If you’re willing to shop around or wait you could find far more capable phones for a similar price. Ones that include extras like an ambient light sensor, a fingerprint scanner, or more.

On the other hand, the Galaxy Express Prime 3 is available for prepaid customers starting at $130. This is a much more reasonable price for the phone you are getting. There still might be better deals out there, but for $130 I feel you’re getting what you paid for.