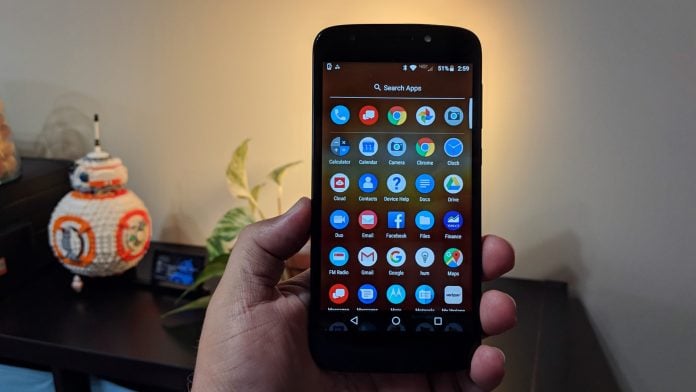 For more than a couple of years now, Motorola’s E series of phones has delivered entry-level, straightforward phones for users who don’t demand a lot of their device. It makes sense that they do so well in developing and emerging markets; it’s all that you need with just a little extra left over.

As a no-frills line of handsets, the Moto E is solid, budget-friendly, and offers up an excellent first phone experience. The 2018 model, the E5 is more of the same. We’ve spent time with an E5 Play and are happy to share our impressions.

If you’ve ever had the chance to use a Moto E phone, you know that’s it not an overly sexy device. Simple in design and straightforward in its approach, it’s what we would call an “everyman” phone. That’s the same for the Moto E5 Play. 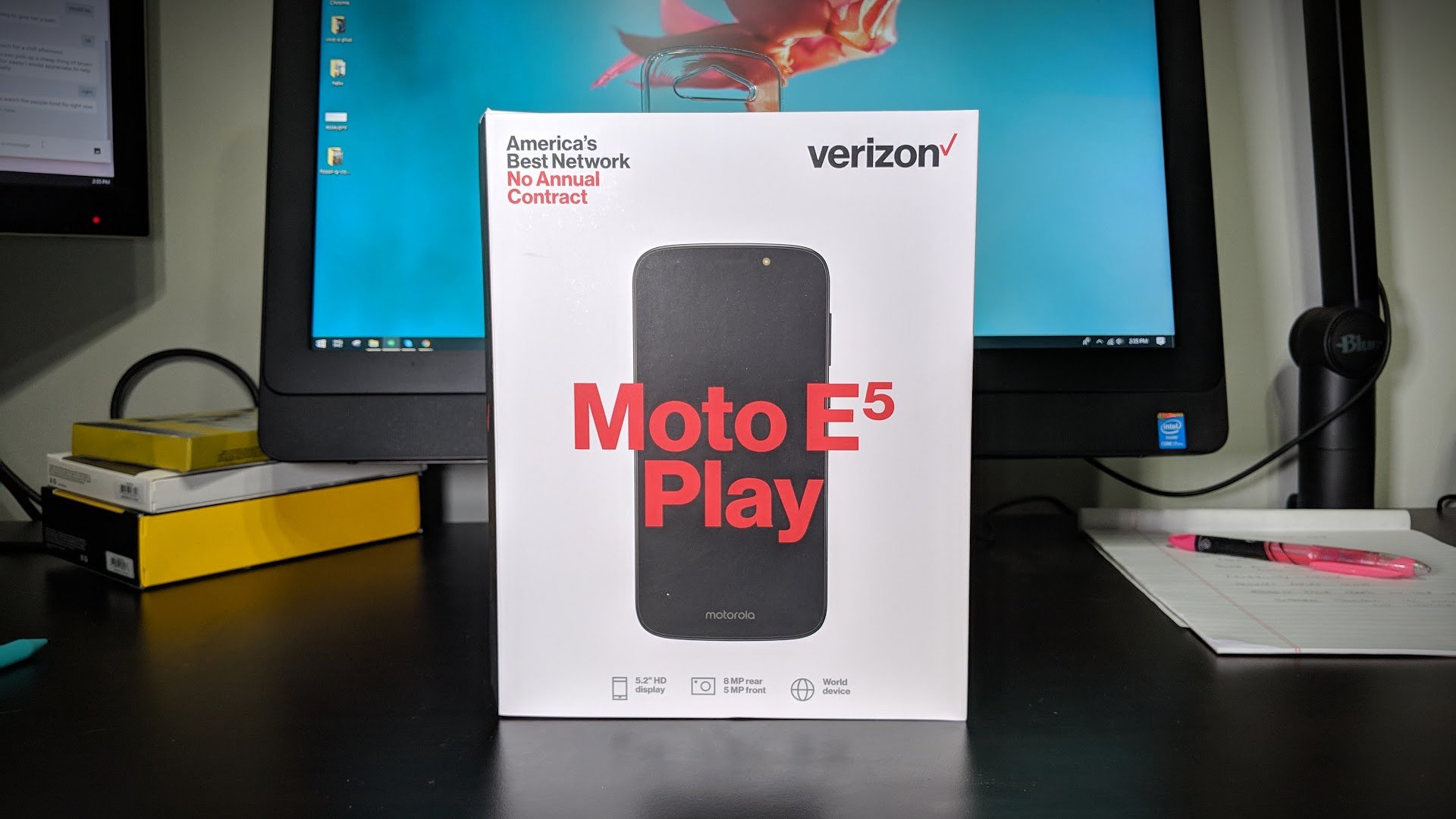 The E5 Play follows the same design language set forth by its predecessors and goes with the same approach internally, too. In essence, look for a utilitarian phone with capable specs, and not much else.

In terms of hardware, the Moto E5 Play packs a 5.2-inch 1,280-by-720 IPS panel, a quad-core processor (1.4GHz), and 16GB storage. Additionally, it offers up a microSD expansion card slot for external storage of media; a 2,800mAh battery powers the show.

As for cameras, this one has an 8-megapixel shooter on the back with a 5-megapixel sensor on the front. Taken as a whole, there’s nothing too fancy, to be sure.

Despite not being a “rugged” phone, the Moto E5 Play does have a water-repellent coating and can handle life’s spills and accidents.

You’ll find the volume and power buttons on the right side of the phone with a 3.5mm headphone jack at the top edge. A microUSB charging port is located along the bottom; the rear cover removes to access the SIM and microSD slots.

It’s worth noting that while the Verizon model comes with a fingerprint reader on the rear, not all versions are the same across carriers. At last check, the Boost Mobile and Cricket Wireless models do not include the sensor. 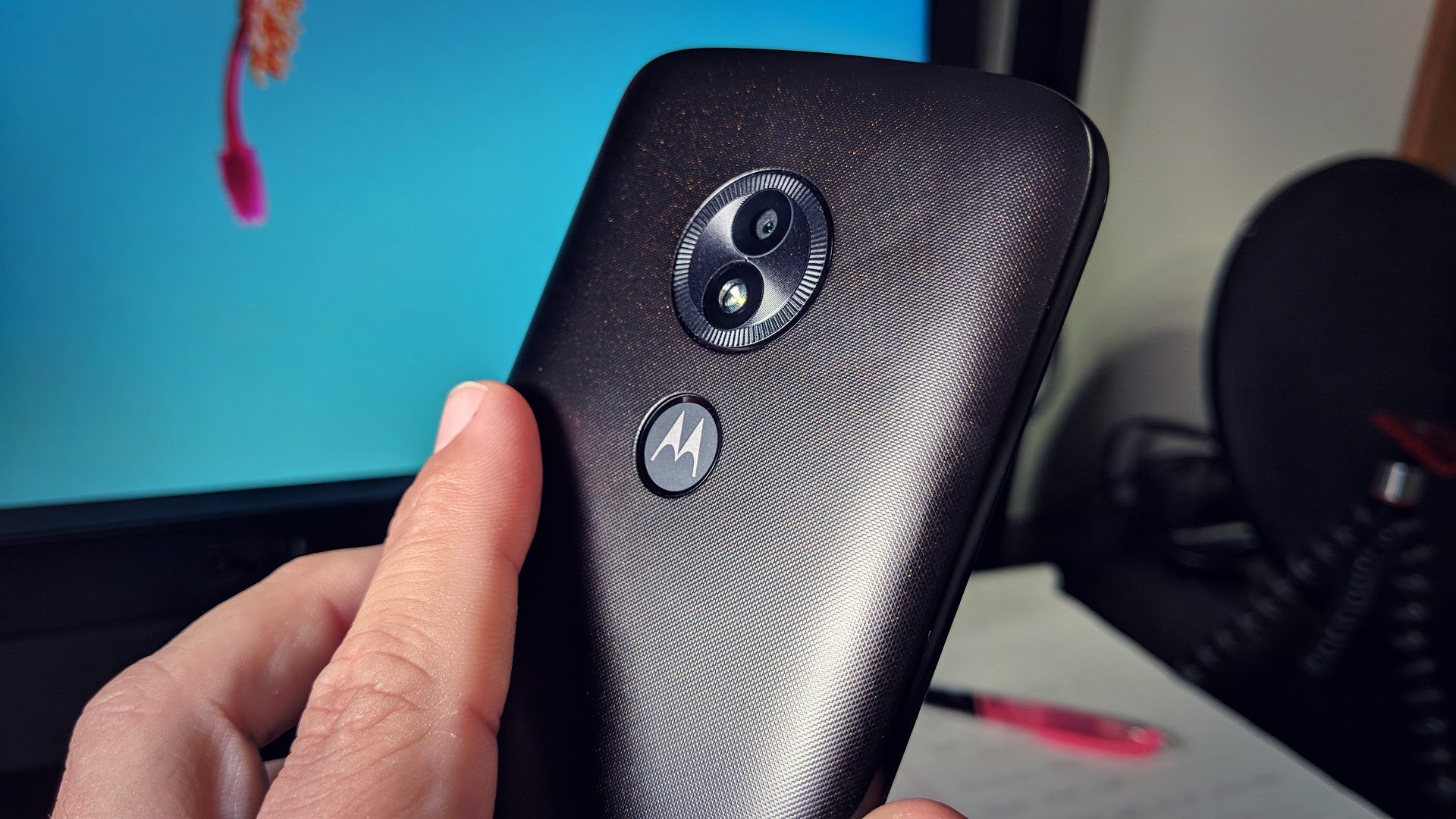 Staying with networks, you can purchase the Moto E5 Play through the following providers as of today: Verizon, Cricket, Boost Mobile, T-Mobile, Sprint, Virgin Mobile, and Xfinity. Color options vary but you’ll find it in Black, Dark Lake, and Flash Gray.

In our testing of the phone we found this to be about the baseline for an acceptable smartphone experience. It’s somewhat frustrating to go directly from a flagship to something like this as the differences in hardware are glaringly obvious. With that in mind, we expect that more casual users, or those who don’t replace their phones all that often would complain much.

Powered by Android 8.0 Oreo, the Moto E5 Play has but a smattering of extra touches. Motorola, as always does a fantastic job of keep the platform pretty much untouched. There’s nothing added to the user interface, meaning it’s basically what Google envisions for its software experience.

Viewing angles are good for the Moto E5 Play and the picture is decent enough for our tastes. Because of its resolution it’s not the sort of phone you’ll want to put in a VR headset.

We did find the phone to feel larger than the 5.2-inch display, at least physically in hand. There’s more bezel around the screen than you’ll find in other phones, but that is a trade-off we’re okay with considering the price. The top and bottom edges could shrink somewhat, though, if we’re being totally honest. 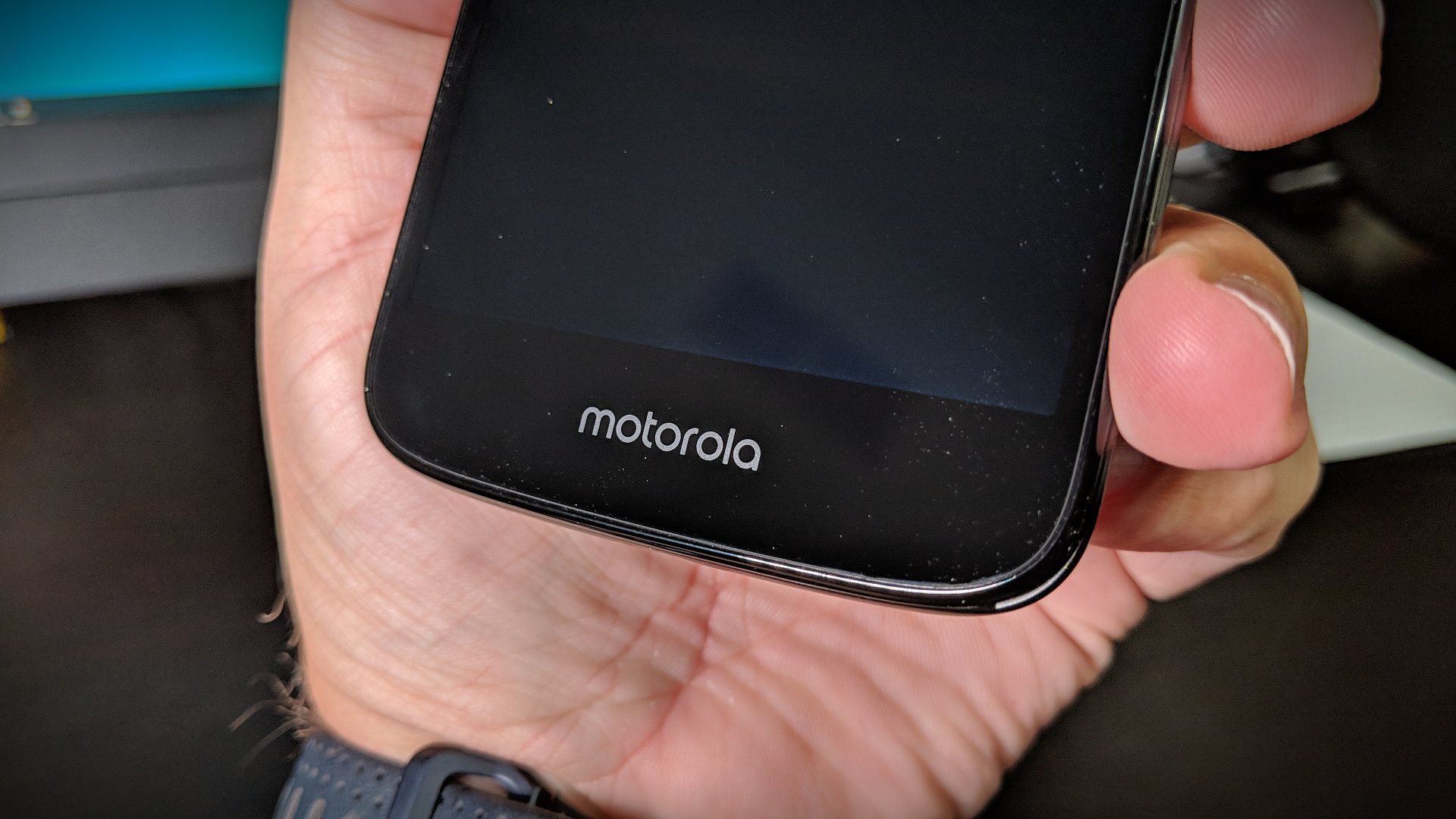 When it comes to taking pictures, the Moto E5 Play delivers passable results. Images look good on the phone and when viewed over social media but close inspection reveals fine details are lacking at times. Lower light conditions seem to impact things more than we expected. Pictures taken in cloudy or rainy days were dull and uninspired and not simply because of the subject and environment.

The front-facing camera is alright but nothing spectacular. If selfies are super important, or if you spend a lot of time video chatting with others, you might want to temper your expectations.

The Moto E5 won’t win any benchmark awards. It also won’t take first prize in a beauty contest. Do we care? Not really. It’s all about practicality at this level. You’re not buying this phone because you expect to get a tier-one experience for less than a night on the town. No, you’re buying it because you need a phone or are just starting out with your first one. 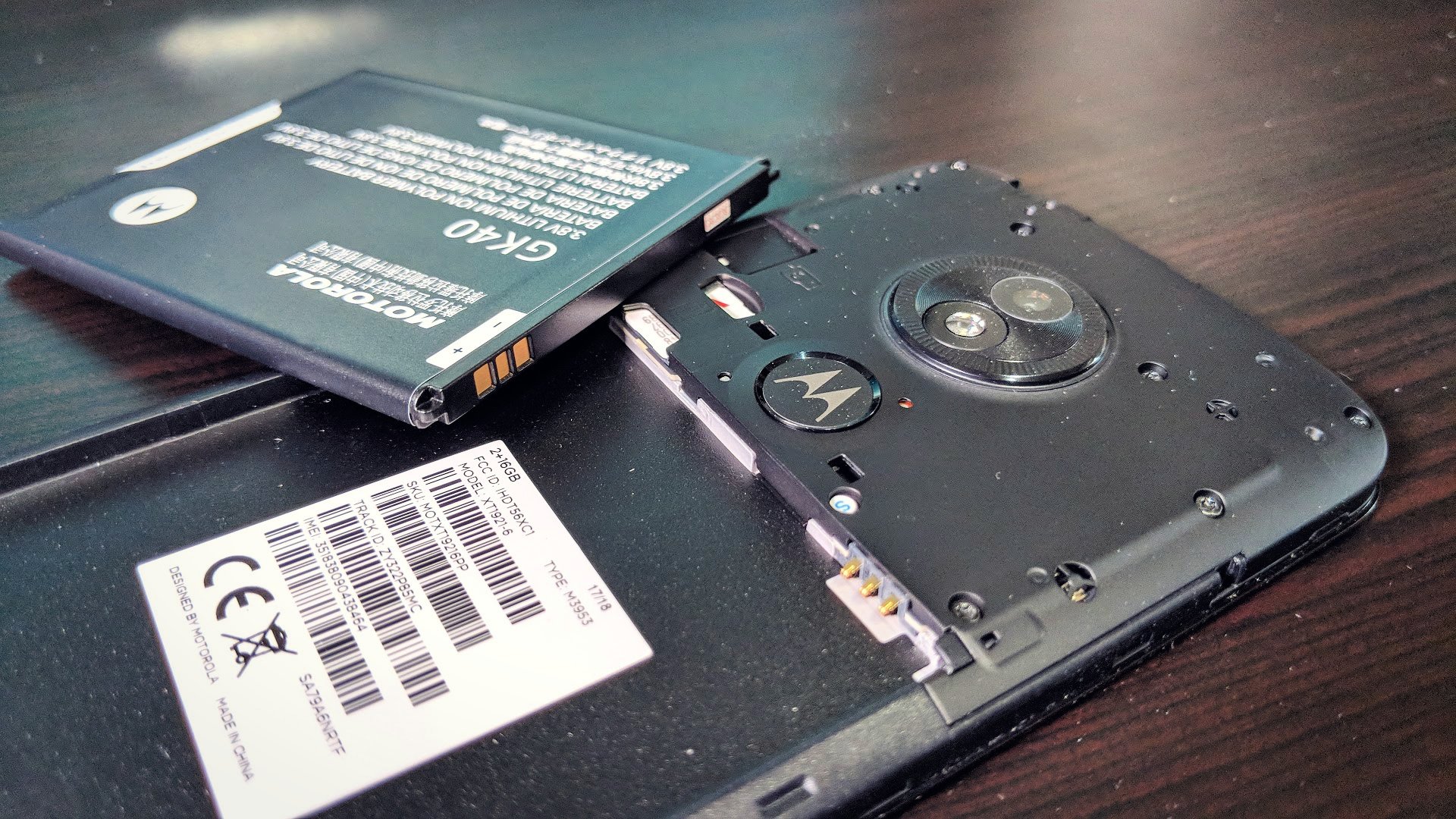 With prices that range from around $40-$100 at different outlets, it’s a terrific pickup for the money. And, when you understand that it can go with you from carrier to carrier, that peace of mind is worth it alone. Hell, assuming you opt for something more expensive later on, we’d suggest keeping this one for backup purposes or travel.

If you’re going camping for the weekend, headed to an amusement park for the day, or spending a few weeks abroad, the Moto E5 Play does the trick. In all of those instances you are not going to spend a ton of time using the phone. What’s the point in buying an expensive phone for those purposes? Moreover, why take the risk in losing or damaging one?

We like that the Moto E5 Play is paired with a variety of prepaid carriers. It’s the perfect demographic for it here in the US. Many of those user types are lesser demanding and the price point is right in line with its hardware.

Admittedly, battery life could be better. The phone’s 2,800mAh is touted as being “all-day” but that’s stretching things a bit. With that said, you don’t exactly have to keep a charger on you at all times. And, even when you are charging, it’s super fast (10W) and you’re back up and running before you know it.

In our testing we found it to last plenty long enough for our liking just so much as we plugged it when driving and didn’t pass up any opportunity to charge during meals. If you have a charger at work, you may really only need it once every so often.

While the overall Android experience is excellent in 8.0 Oreo, and Motorola’s extra gestures and enhancements are minimal, we can’t say the same for the installed apps. There’s plenty of carrier-branded influence here, at least on our Verizon review unit.

Among other titles, we found ours to have Yahoo Finance, Yahoo Sports, Solitair, Slotomania, Word Blitz, Yahoo Mail, Wish, and Weatherbug. This was in addition to the Verizon stuff. Fortunately, we were able to uninstall these non-essential titles. 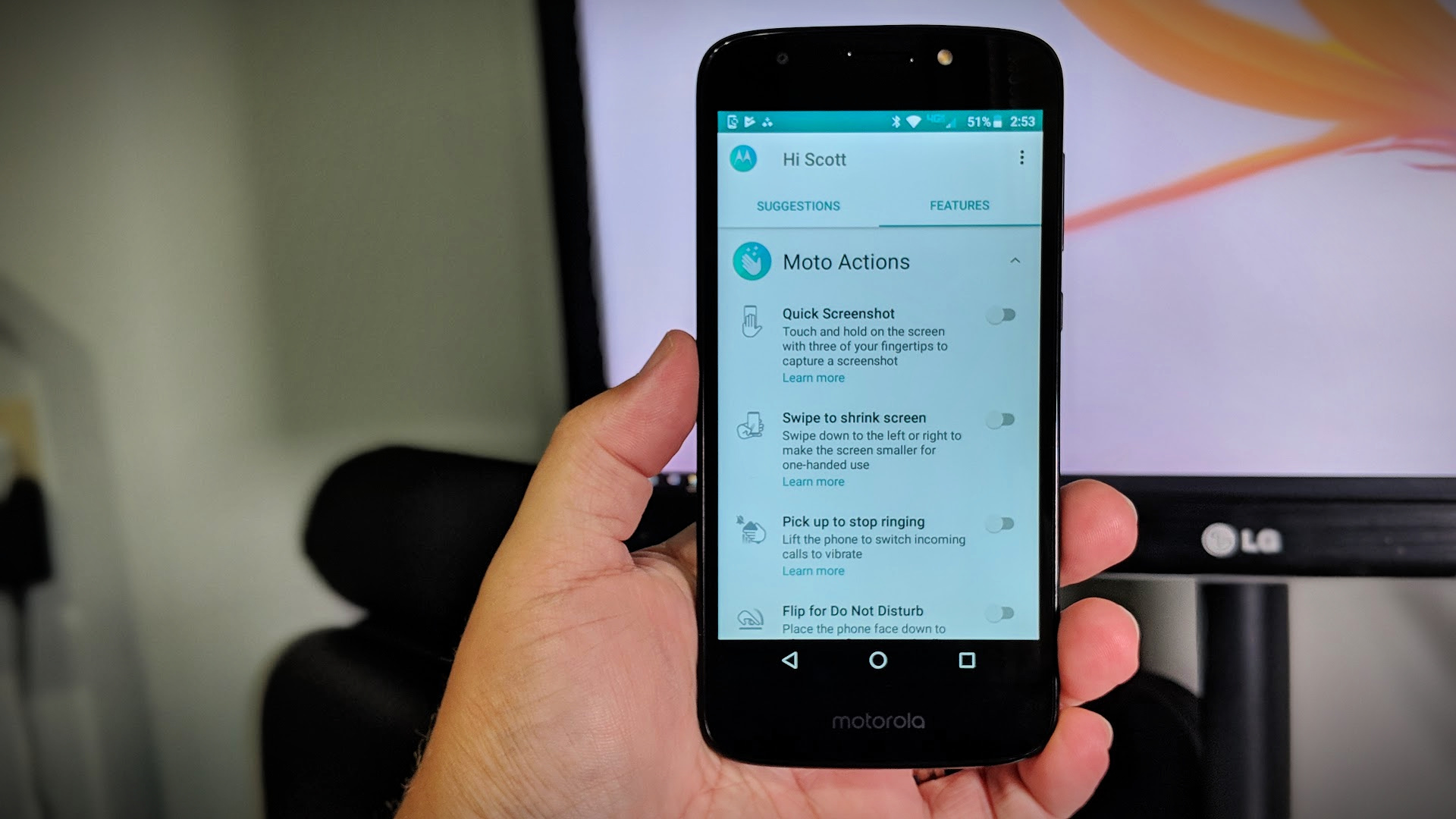 We noticed that there was approximately 40% worth of storage space already spoken for so definitely look for a microSD expansion card. A few apps and games later and you’re sitting on the down side of the hill. That’s not even counting the pics and videos you’re likely to take.

We recommend at least trying out some of the Motorola gestures and functionality. A lot of them provide a bit of handiness and practicality. And, really, we miss them when they’re not activated or enabled.

Regardless of where you buy it, the Moto E5 Play makes for a solid all-around value. It’s everything you need in a device (web, social media, email, and messaging) with just a little bit left over. 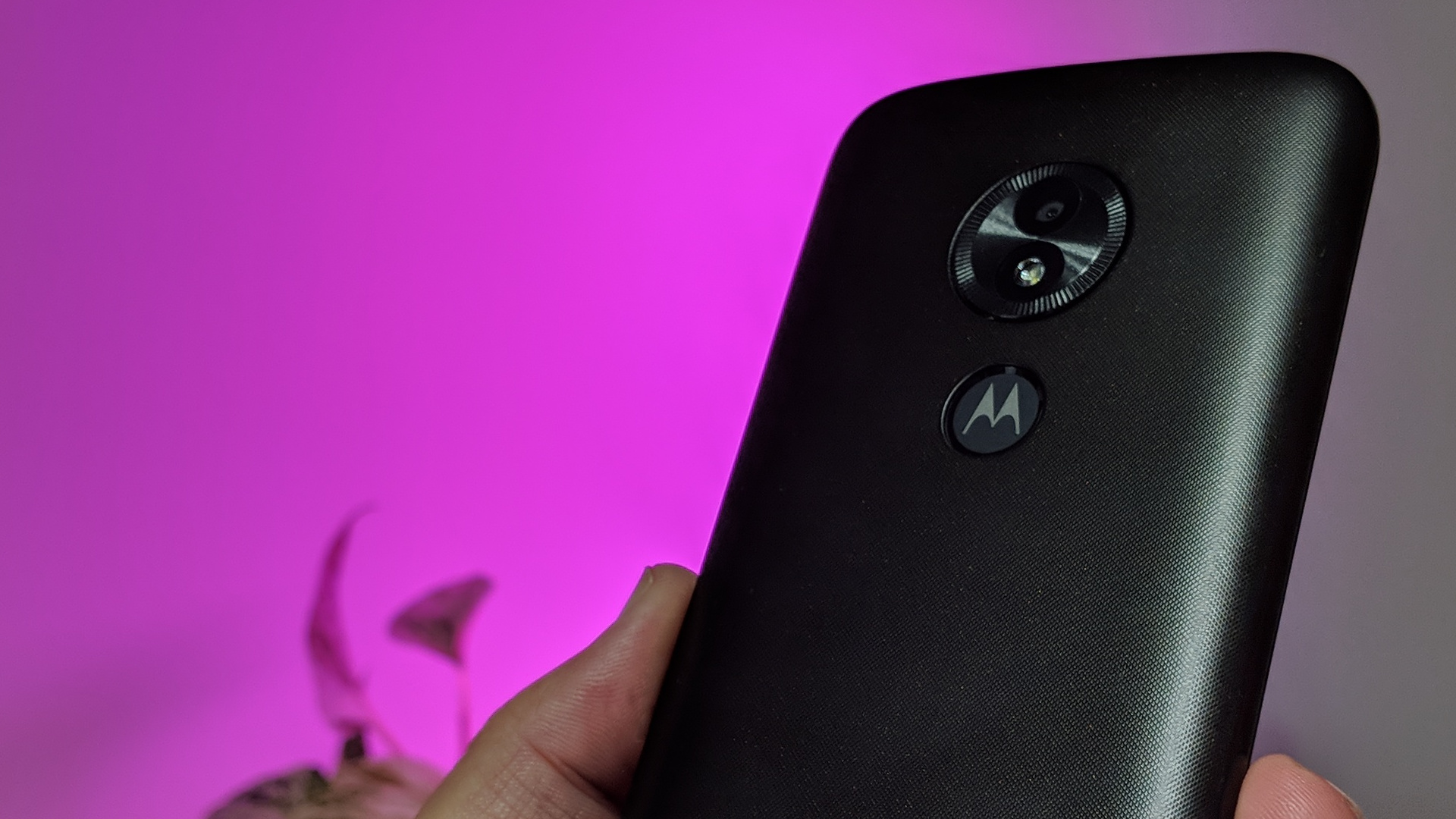 There’s nothing overly sexy about the phone but we appreciate having the 3.5mm headphone jack, fingerprint sensor, and microSD card. It runs a very modern version of Android and the custom Motorola touches are essentially opt-in. We might like to remove some of the Verizon branded stuff but that ought not reflect on what Motorola’s done here.

For a first time smartphone user, less demanding consumer, or someone who might need a phone in a pinch, the Moto E5 Play is a great bargain. If your phone use is a mix of want and need, you may wish to look elsewhere.