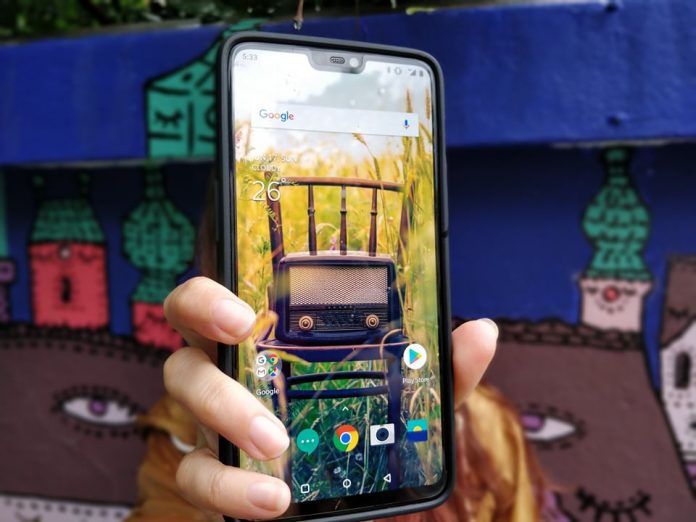 OnePlus’ creed has always been to deliver smartphones packing the latest technology at an affordable price. When the OnePlus One came out in 2014, it quickly became a wild success.

It was a hard-edged phone with a backside covered in sandpaper. It offered high-end components and the freedom for nerds to tinker around with the phone’s software.

Four years later, the Chinese indie brand has unveiled the OnePlus 6, and it’s the company’s most mature phone to date. Yes, it costs nearly double than what the OnePlus One use to, but the company has evolved a great deal and with this model, I believe it has completed its transition to the big league.

It’s a stellar piece of technology that looks and feels like a million bucks. And the best part is, it won’t burn through your savings like the iPhone X. Instead, OnePlus has managed to once again keep prices relatively low (compared to the competition), so the OnePlus 6 starts at $529 for the 6GB RAM and 64GB storage model.

So if you’re on the market for a phone right now that doesn’t compromise on specs and features, the OnePlus 6 is one of the best options you have available at this point.

Not 100% sure you want to jump on board yet? Keep reading below for more details on OnePlus’ latest flagship.

Much of the OnePlus 6’s appeal comes from the fact that it now sports a completely new build and design. This year, OnePlus abandoned the aluminum back of its previous phones in favor of glass, Corning Gorilla Glass 5 to be more precise. Which now covers the back and front of the device. Despite the change, the phone does retain the slight palm-curved shape of earlier models. 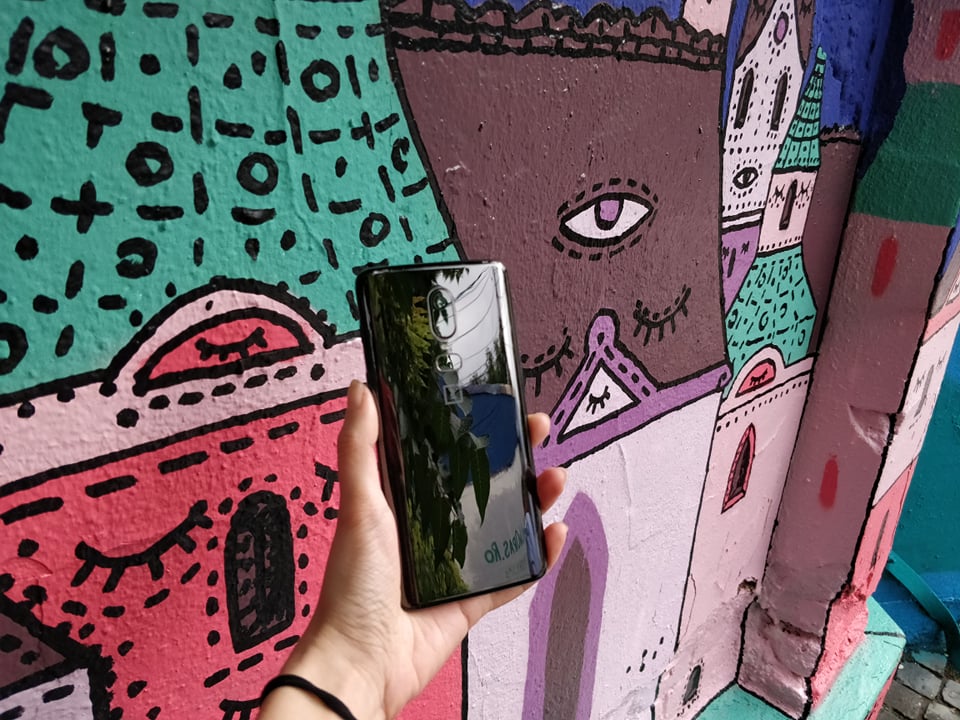 As far as I’m concerned, the OnePlus 6 looks stunning and feels really premium, but the all-glass design might feel a bit overused to some. After all phones like the LG G7 ThinQ, Galaxy S9 and others also adhere to the same current.

OnePlus has also incorporated other trendy design details into the new flagship. Yes, there’s a notch on the 6.28-inch Optic AMOLED display, but if you’re not a fan of that don’t fret. The company gives you the option to easily hide the notch from settings.

Now, if you were to hold the OnePlus 6 next to the 5T you’ll immediately notice that screen real estate on the former is bigger. It’s grown from 6-inches to 6.3-inches, leading to a slight increase in thickness (0.4mm) and weight (14g). Though the newcomer has shrunk a bit in width.

The display itself is still excellent, although there are no major upgrades to speak of. The resolution is the same FHD+ or 2,280 x 1,080, and the AMOLED display continues to offer bright, sharp and vivid colors, with great viewing angles.

Like on its predecessor, users can choose between a number of different screen calibrations including default, sRGB, DCI-P3 and Adaptive.

The only area where I found myself wishing the OnePlus 6 would be better sunlight readability. It’s summer here and days are super-sunny. On most occasions I was forced to shield the screen with my palm in order to be able to read something. 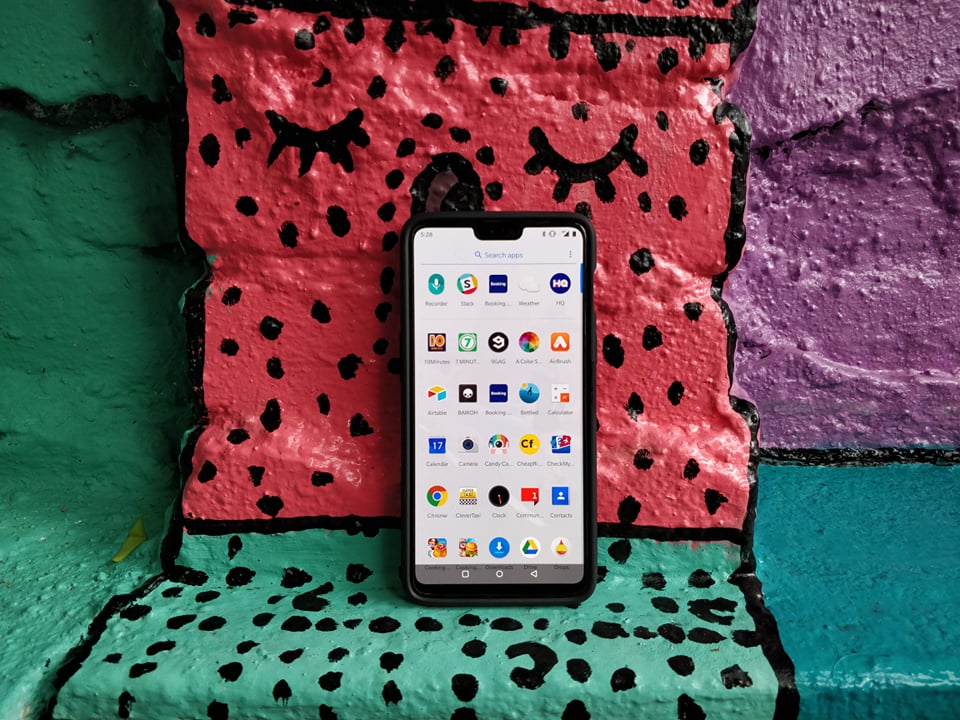 The back of the OnePlus 6 looks quite reminiscent of the Galaxy S9+. Both devices have a vertically stacked, centrally arranged dual-rear cameras and a candy bar-shaped fingerprint scanner below. Which is super fast, although I’m not such a big fan about the shape. I prefer circular.

This is quite a departure from the OnePlus 5T that had a horizontally-aligned dual camera located in the top-left corner and a circular fingerprint reader position centrally. 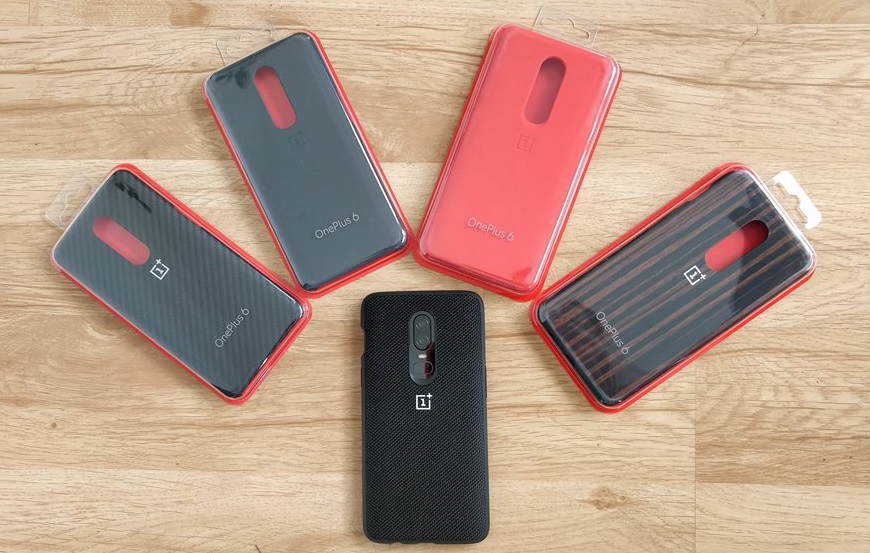 As you would expect, though, from a phone with such a glossy finish, it’s a dust and fingerprint magnet. On the bright side, I found it to be less slippery than the OnePlus 5T.

In any case, you can easily slap a case on the back of the phone. I particularly liked the rugged Bumper case OnePlus provided in the box with the phone. It’s very stylish in nylon and gives your device the soft feel of fabric.

There’s been a switch-up in other classic OnePlus design elements too. For example, the iconic alert slider has been moved to sit on the top right side. Regrettably, it’s a bit stiff and requires a firm grip on the phone to slide. But that’s just a minor detail.

Beneath it sits the power button. On the left side, you get a volume rocker and the phone’s dual SIM card slot. At the bottom edge resides the USB Type-C connector, 3.5mm audio jack port and a sole speaker. 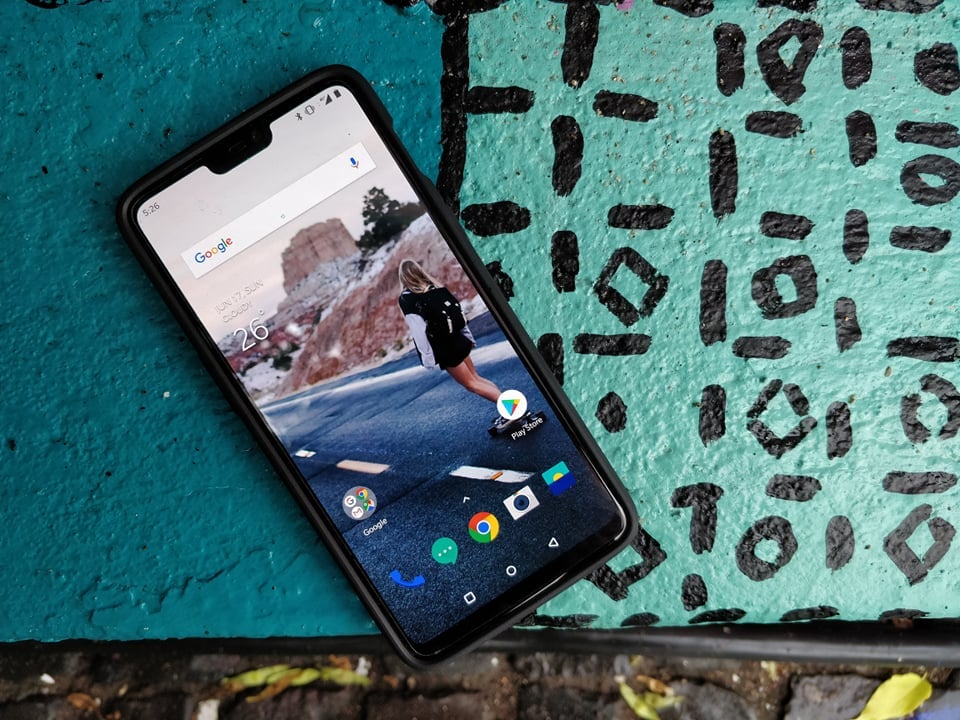 Like on the 5T, the speaker is pretty basic, albeit it being enhanced by Dirac. You won’t find here a dual speaker setup or anything fancy like special audio chambers. If you’re an audiophile, you will have to look somewhere else. Perhaps in the direction of the LG V30 family.

We should also note at this point that the phone is water resistant for “everyday use”, but does not carry an “official” IP67/IP68 rating.

The OnePlus 6 is as good as any flagship launched in 2018. It includes Qualcomm’s top-of-the-line Snapdragon 845 in combination with 6GB or 8GB of RAM. For the first time, the company is offering a 256GB storage option, alongside the 64GB and 128GB one.

This means that the phone is really fast and responsive, and games load quickly and reliably with minimal stutter or frame dropping. I’ve been using the device for a few weeks and I can’t say I’ve experienced any odd occurrences or random freezes. Our review variant has the 8GB RAM and 128GB storage configuration.

On top of the pure power radiating from under the hood, the OnePlus 6 also gets the new capability to support two LTE connections simultaneously. 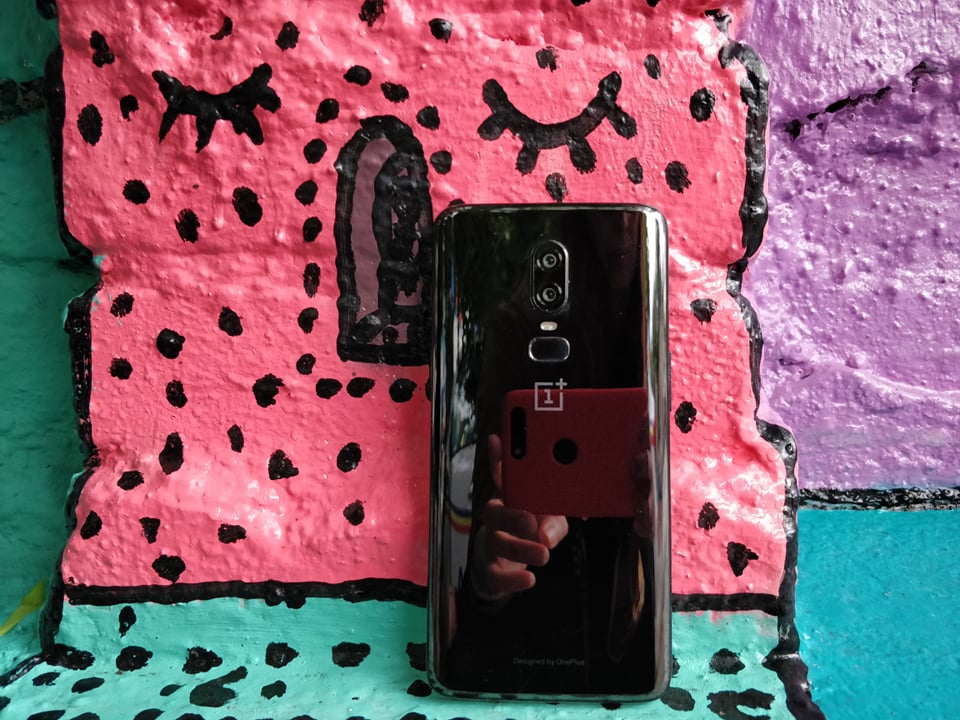 Battery-wise, the OnePlus 6 is a winner. It still retains the same 3,300 mAh juice box of the OnePlus 5T, but it lasts just as long, in some occasions even longer!

For example, I fully charged my phone Sunday morning and on Monday morning I still had 55% left.

Yet, despite having a glass rear, the OnePlus 6 does not support wireless charging. Fortunately, it has Dash Charge which can take you from around 27% to 100% in an hour or so. However, I should note that Dash Charge is proprietary, so it won’t work with another USB-C cable. You must use the one that OnePlus provided.

The camera performance was one of my main complains when I reviewed the OnePlus 5T. I hoped OnePlus would address the issue with the OnePlus 6 and it did.

Yeah, the camera it’s still not as good as the Pixel 2’s or Huawei’s fancy P20 Pro, but it’s definitely a step up in the right direction.

You might not believe this looking at the bare specs. On paper, the dual-cameras on the back are pretty much identical to the previous model. There’s the same 20-megapixel + 16-megapixel with f/1.7 combination. BUT, and there’s a big but, the main camera now has a 19% larger sensor.

Which means the sensor is capable of capturing more light, which in turn translates into being able to take better low-light pictures. Oh, and we also get optical image stabilization.

When compared to the OnePlus 5T, the OnePlus 6 is able to pick up more of the finer details, even in poorly lit environments. Sure, things aren’t amazingly sharp in low-light, but you will certainly be able to notice the improvements. Even as it falls behind phones with larger sensors and wider aperture like the beastly Huawei P20 Pro, the OnePlus 6 can take a decent bar or concert picture.

Where the OnePlus 6 shines is in daylight photography, with Portraits looking particularly remarkable.

Sure, there’s still work to be done. For instance, the second camera is only there to add depth data for the phone’s blurred background portrait mode. Which granted, works pretty well. Yet, the sensor doesn’t bring anything extra like optical zoom or the ability to capture monochrome images.

OnePlus has also added a new slow-mo video mode which lets you shoot 720p video at 480fps or 1080p at 240fps. You can also shoot video in 4K resolution at 60fps with OIS enabled, which is pretty sweet.

The selfie-camera remains a 16-megapixel sensor, but it seems to be able to take sharper selfies, as least as far as I can tell. A new selfie Portrait mode was also recently added via a software update.

The OnePlus 6 comes running the latest version of Google’s mobile operating system, Android 8.1 Oreo with OxygenOS on top. Like always, you’ll get a smooth and clean experience, with only a handful pre-installed apps. Obviously, OnePlus has included a few software tweaks of its own. 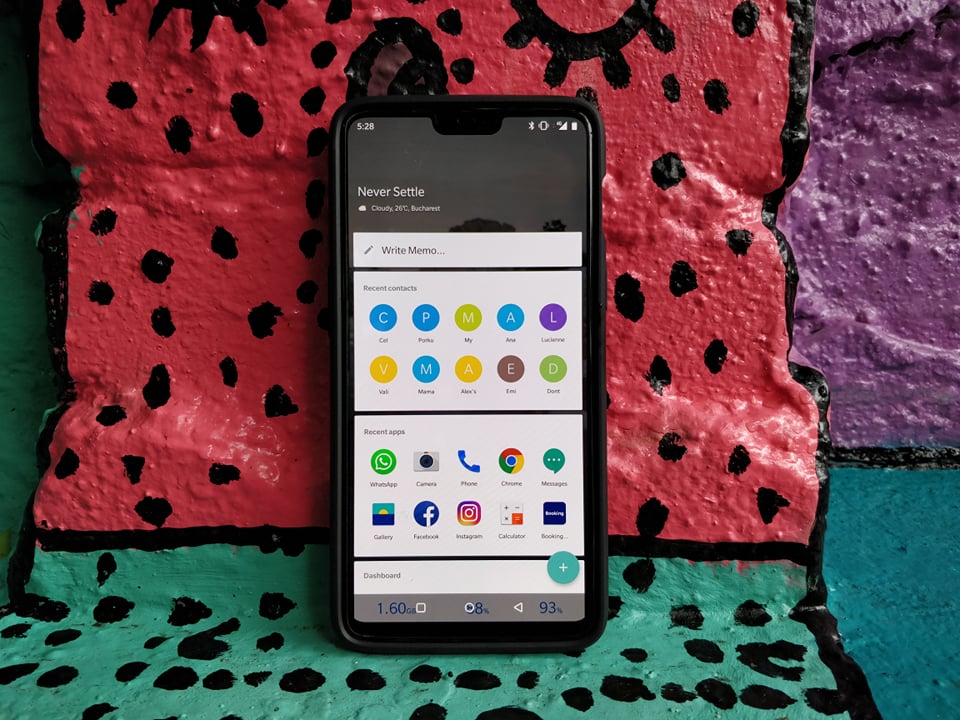 For example, a new gesture control system can replace the familiar Android on-screen nav button triad with an iPhone-X like swipe system. Which, unfortunately, need more perfecting because it’s often times unreliable and frustrating to use.

Other features you’ll find on board the OnePlus 6:

Finally, the OnePlus 6 is one of the phones on Google’s Android P beta list, so you can give the latest version of Android a try if you buy it.

With the OnePlus 6, the Chinese company has delivered a suitable successor for the OnePlus 5T. Boasting a beautiful design, top-notch specs and much-improved camera, the new flagship should definitely be on your radar if you’re on the market for a new phone.

Obviously, no phone is perfect and the OnePlus 6 is no different. It does lack a microSD card slot, waterproofing and despite having a glass back, it does not offer wireless charging. Which would have been nice.

But none of these are actually deal breakers, especially at this price. Just think about it, you’d be getting a premium glass phone with a Snapdragon 845, great display and competitive dual-camera for only $529. 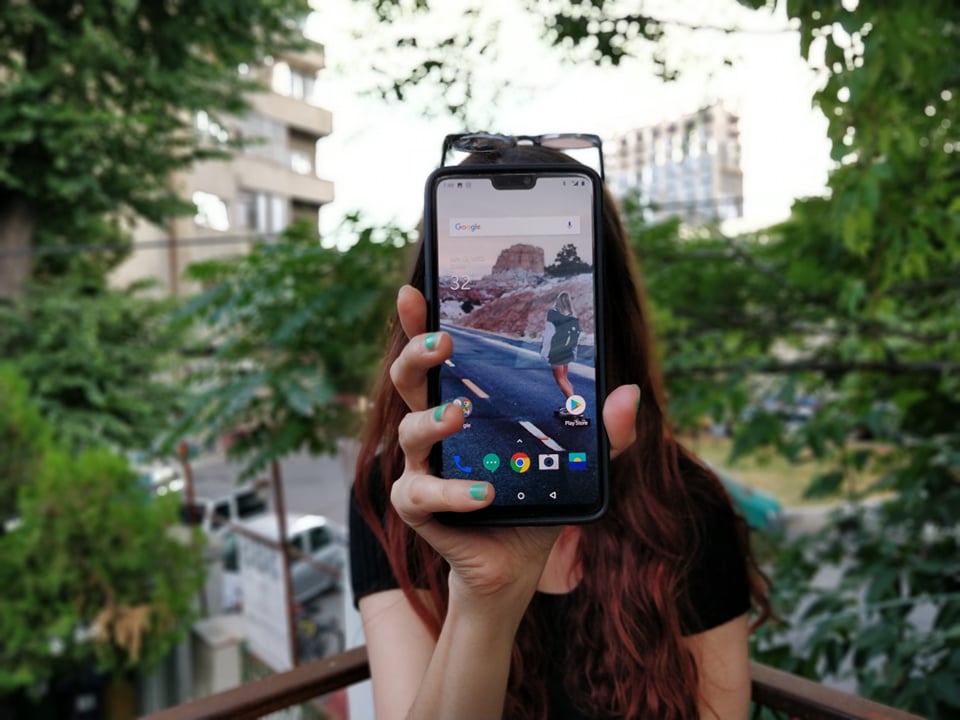 If you’re not looking to spend more than $600 on the phone, then the OnePlus 6 is absolutely the best device you can get on this budget. Aside from the minimal issues we’ve outlined in this review, the OnePlus 6 is more than capable to compete head-to-head with the top flagships available on the market today. And in some respects even outdo them.

However, there’s a caveat to be taken into account before buying the OnePlus 6. It does not work on Verizon or Sprint networks. Thankfully, it works just fine with GSM carriers like T-Mobile and AT&T. So if you’re already a subscriber, you should be good to go. If not, you might want to consider switching carriers. Or, you could take a look at the alternatives. The Honor 10 View and ASUS ZenFone 5Z (which is not yet available in the US) are the closest options right now.

The OnePlus 6 is currently available in the following coloring options and configurations:

BLU's latest, the G91 PRO checks all the boxes for the important features in handsets for a wide range of consumers. Read our review.