OnePlus has been making great phones for years now, continually and regularly pumping out really solid devices with more affordable price tags. It certainly offers an interesting option for users who want performance but aren’t willing to spend $1,000 for a smartphone.

The OnePlus 7T marks a new device that may blur that line of the premium flagship even more. Here’s my review of the handset after having used it for multiple weeks.

I was immediately impressed with how well built the OnePlus 7T was out of the box. If you cover the ‘OP’ logo on the back, this phone could easily be mistaken for a premium flagship from the likes of Samsung. You get a sharp glass back with a slightly matte finish surrounded by an aluminum side rail around the sides of the device.

Even the small details are there with the tactile feedback of the buttons. The power, volume rocker, and that glorious notification profile slider are all very stiff and offer a great response that you simply don’t see on many smartphones. You’d probably be surprised by how many pricier devices feature buttons that feel like an afterthought.

The other part of the phone that quickly jumps out is when you power on the OnePlus 7T. Apart from the small teardrop for the front-facing camera, the 6.55″ screen takes up the entire top half of the OnePlus. It’s a 1,080 x 2,400 resolution panel with 402 ppi density and is protected by Corning Gorilla Glass 5. 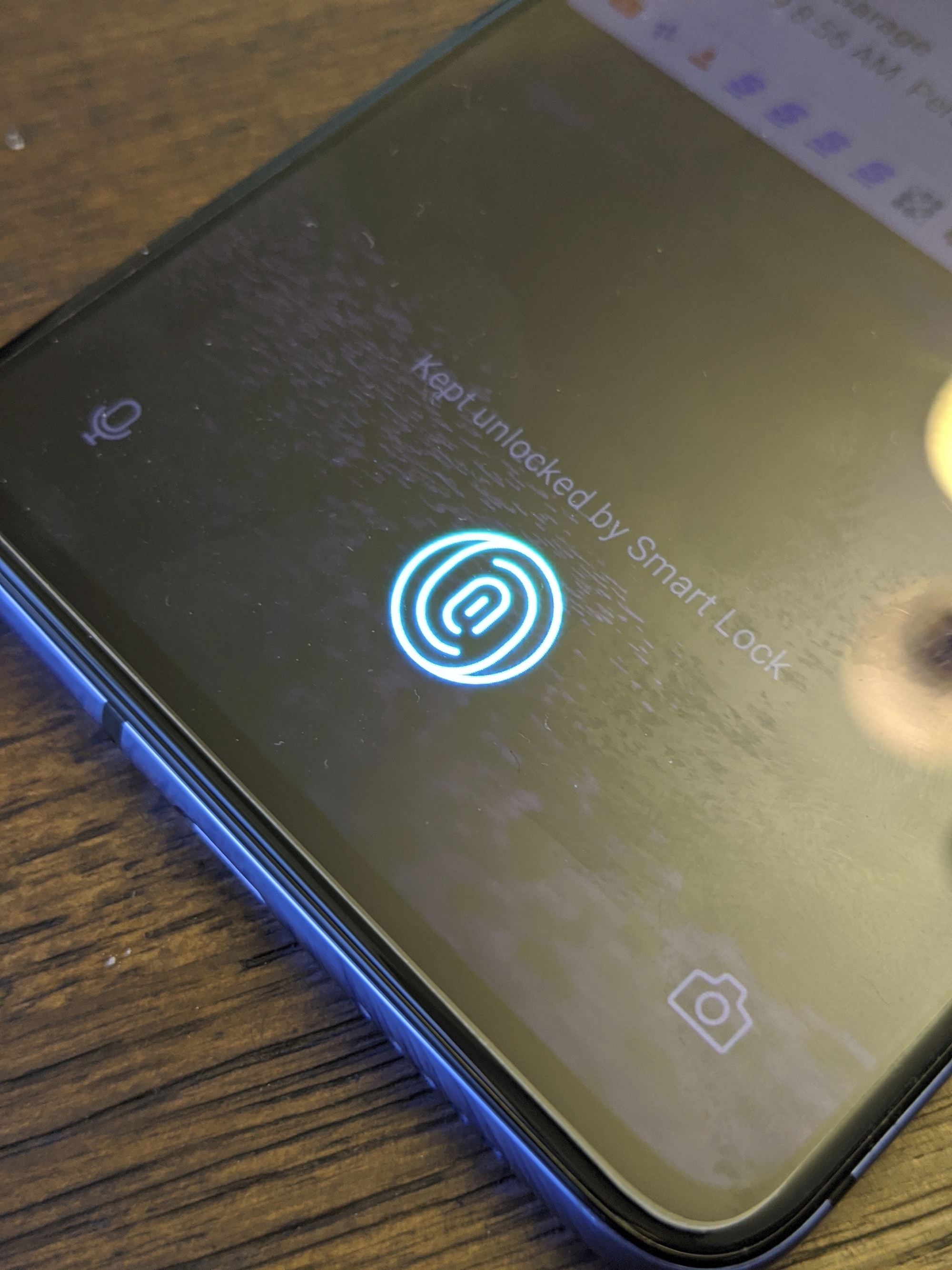 By far, the best part of the screen is the refresh rate. The 7T comes standard with the same 90Hz refresh rate that’s found in the OnePlus 7 Pro. It’s really hard to show or convey on the internet but does make the entire OS seem more responsive and snappier.

The combination leaves you with a great overall experience for the OP 7T. While not quite as impressive as the 7 Pro, you still get 87% screen-to-body-ratio. Colors are also well represented, and the viewing angles are really good both indoors and outdoors.

OnePlus made its bones by mainly killing it on base hardware options at much less money, and the 7T is no different. The phone’s offered in 8GB of RAM and either 128 or 256GB of storage. This on-board storage is also a tick above the competition with UFS3.0 standard that with much faster write speeds to older devices.

Rounding it out, the OP 7T has a spec bump to the latest Qualcomm 855+ processor, paired with the Adreno 640 GPU. These hardware selections complete an engine that will serve mobile gamers and casual users alike. You should have zero questions around daily performance if you’re considering spending your hard-earned cash on the OnePlus 7T.

It’s been a few years since I’ve reviewed or owned a OnePlus. As a fan of “stock Android,” the small tweaks that OP offers with OxygenOS are mostly refreshing. Having the little options like swipe down to see notifications and the dismiss all icon for those notifications to be within reach at the bottom of the shade shows OnePlus takes feedback and user experience seriously. 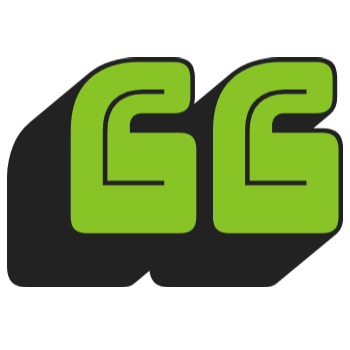 OnePlus also offers great options for theming, icon tweaking, and overall performance alterations. It’s very customizable but toes the line and isn’t overwhelming. It has a nice balance without getting into an old Touchwiz-type bloat. You can still find all the default settings like you’d see on a Pixel without getting lost in Settings.

Otherwise, you get every great feature of Android 10 with the OnePlus 7T. It’s actually the first OEM to launch a new device with the latest version freshly installed as the base day one installation. I won’t go into a full review of Android 10, but you get the great refreshed OS version with the new gesture navigation being the most user forward feature.

This one is always subjective, but also worth mentioning for users. My personal usage tends to trend towards an average of 2-3 hours of screen on-time for most days. With that, I never got home with under 50% battery during a workweek. When I consciously pushed the OnePlus 7T to between 4-5 hours of on-time, I was finally able to kill it before around 11 pm.

Again, this metric will vary from each owner to another, but coming from the Pixel 3 XL, I’d only averaged around 3-4 hours of screen on-time on my heaviest days without reaching for an outlet. It was nice to use the OP 7T without always pondering topping off the battery throughout the day.

That brings me to the adjacent battery spec: WarpCharge. OnePlus’ proprietary fast charge option pushes an amazing 30W of max charging output. This insane amount of power surge will take the OnePlus from dead to 70% charge in just 30 minutes. Normally I would dismiss this as the same type of remarks we see from OEMs all the time, but my testing shows this is pretty close to reality. 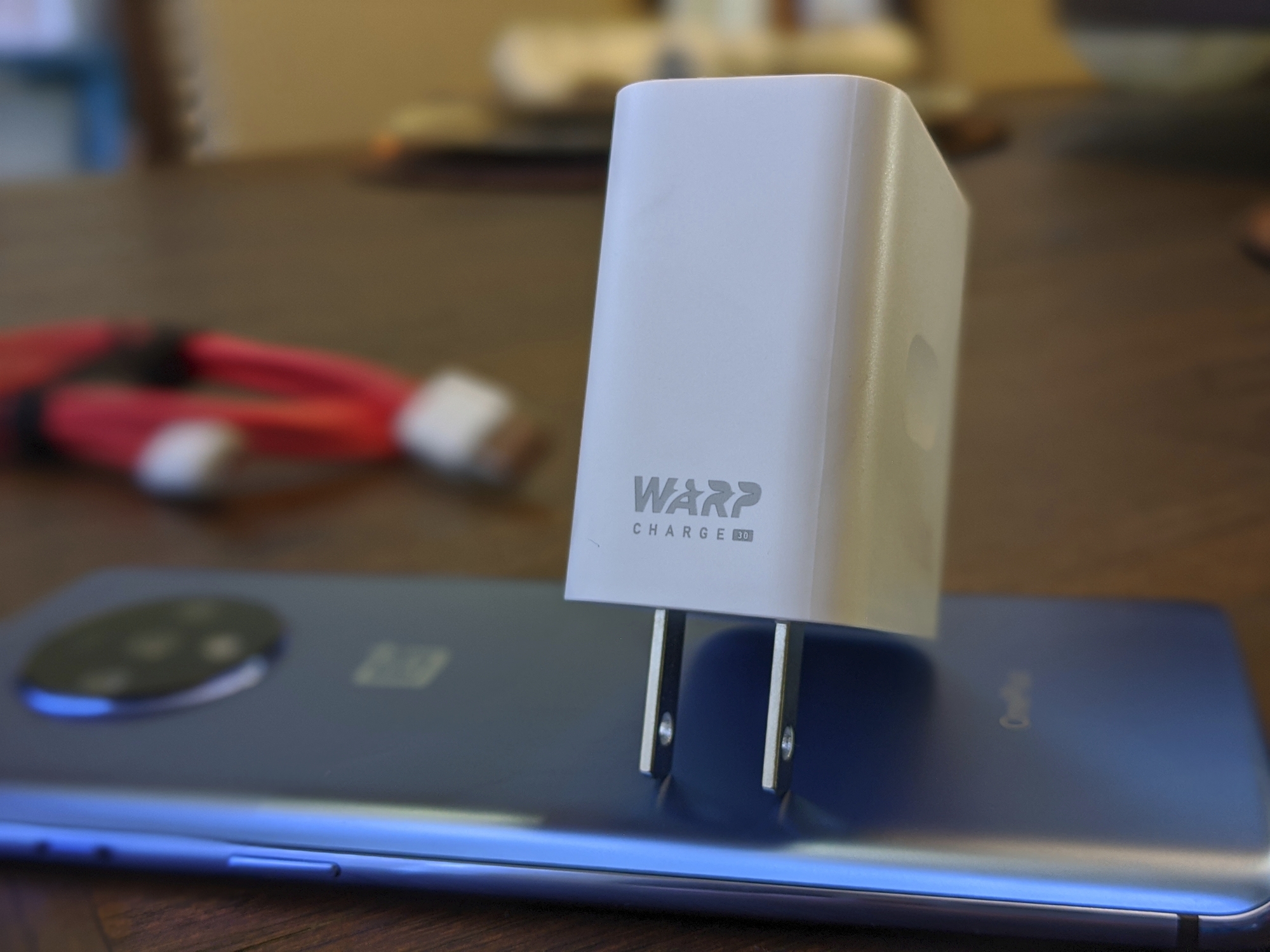 I struggled on which section of the review to place the three-headed camera module on the OnePlus 7T. Saying the 48MP main shooter is bad isn’t taking a holistic approach, but my final answer is that it’s still not good enough. 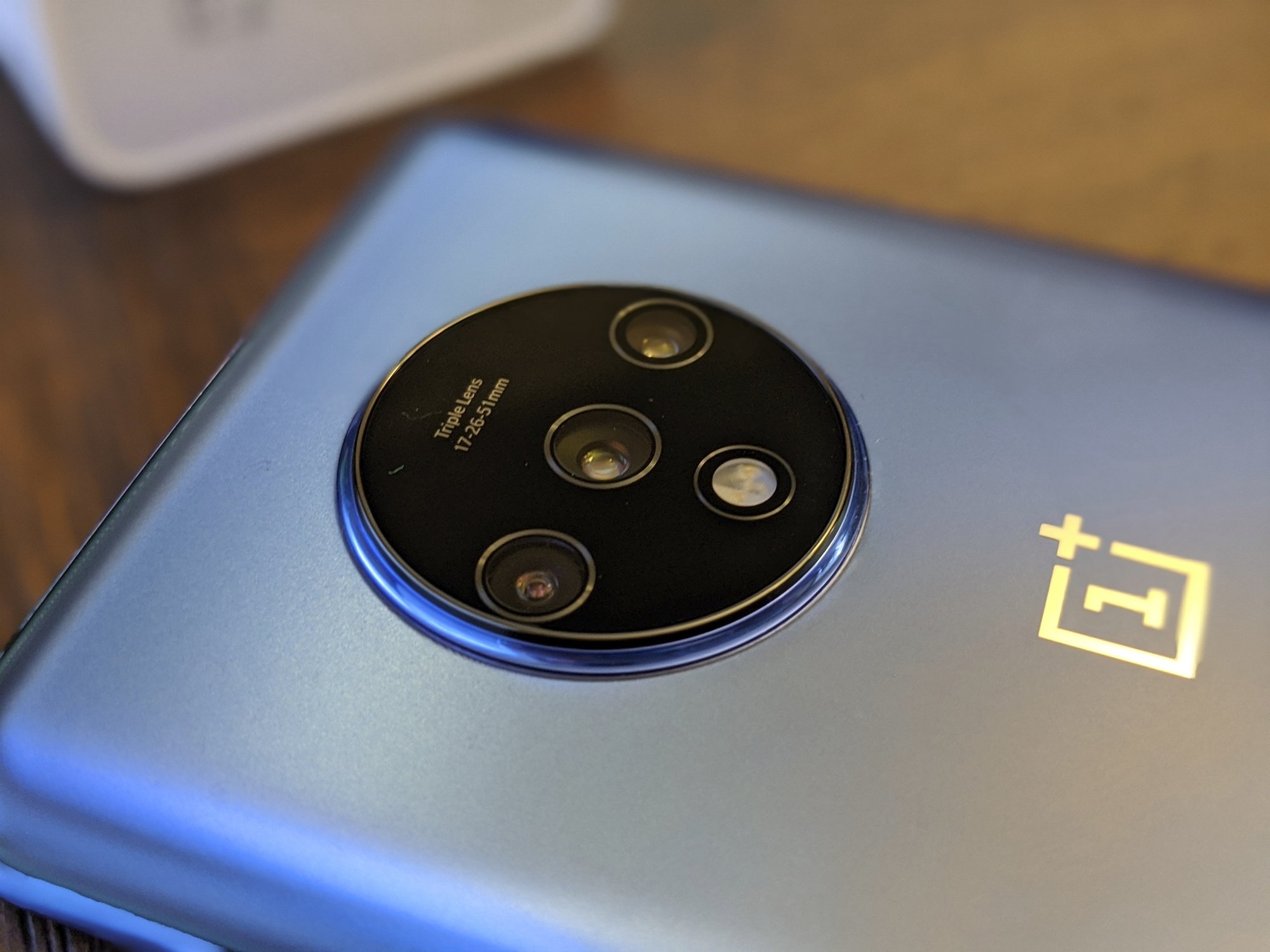 The Pixel set the bar of flagship camera results a few years ago. This year the iPhone introduced a much-improved camera that many feel has surpassed the Pixels. In a vacuum, the OP 7T has a good camera, but when compared to the strides others are making they are just good and not great.

The main sensor still just struggles to get as sharp and detailed results as other smartphones on the market. In my findings it has a hard time focusing as quickly or steadying the shot as Pixels and Galaxies. I really had to consciously still my hand and make an attempt to make sure the shot was going to be good. By comparison, I can just point and shoot with the competition.

The OP 7T does beat the new Pixels with sheer options with a 2nd telephoto lens and a widescreen lens. Again, this offers selections in flexibility, but the results are just OK. As you focus the shots either with the 2x telephoto or you widen the shot with the widescreen sensor you are taking in more details that the OP has a hard time rendering in post-shot processing.

All the camera options do push the OP 7T past the companies previous offerings, which is always positive. Unfortunately, they still fall behind its competition. This continues the debate at the core of OnePlus values. Users will have to make the choice of whether the camera is good enough at the price to not force them to shop elsewhere.

OnePlus has a long history on Reddit and XDA of user complaints concerning its choices on memory management. I haven’t really had an issue with this, but I did see questionable results when using the OnePlus 7T. I don’t really have an issue of closing some actively open apps in the multitasking view, but I did see issues with background apps not receiving notifications.

This issue was hard to accept for me. The great thing about smartphones as opposed to older desktop are active notifications. Users have the ability to receive pertinent information from apps whether they are open or not.

Unfortunately, I consistently saw apps that I depend on within my family’s circle not notify me efficiently as with other Android devices. Our security cameras, doorbell, and family app Life360 all had long delays when compared to my Pixel as well as the BlackBerry Key2 LE that I kept as secondary phones. I’d like to see OnePlus work on scaling this back to get a better balance for background services.

I’d also make a solid assumption that this may lead to some of the issues the OnePlus line exhibits with Android Auto as well. I saw way too many lock-ups and crashes on trips longer than 30 minutes with the OnePlus. There are multiple theories around the web concerning this, but if OxygenOS is killing apps in the background too quickly, then Auto may be another service casualty.

While these are not necessary for a “flagship,” wireless charging an official IPX rating are more commonplace than not with a modern smartphone. This should especially be so with a company sporting the motto of “Never Settle” directly on the phone.

Can you live without the cordless charger? Sure. Does it break the deal that it’s not rated for water and dust resistance? Maybe. I’d just like to see it included as the price of the OnePlus devices continues to rise. And not only that, but users have been asking for years for these additions.

I really enjoy using the OnePlus 7T. It hits so many sweet spots for me as an Android user. Clean OS using mostly stock software. Great build and 90Hz screen. Timely updates in comparison to some others. Oh, and the price is totally palatable. 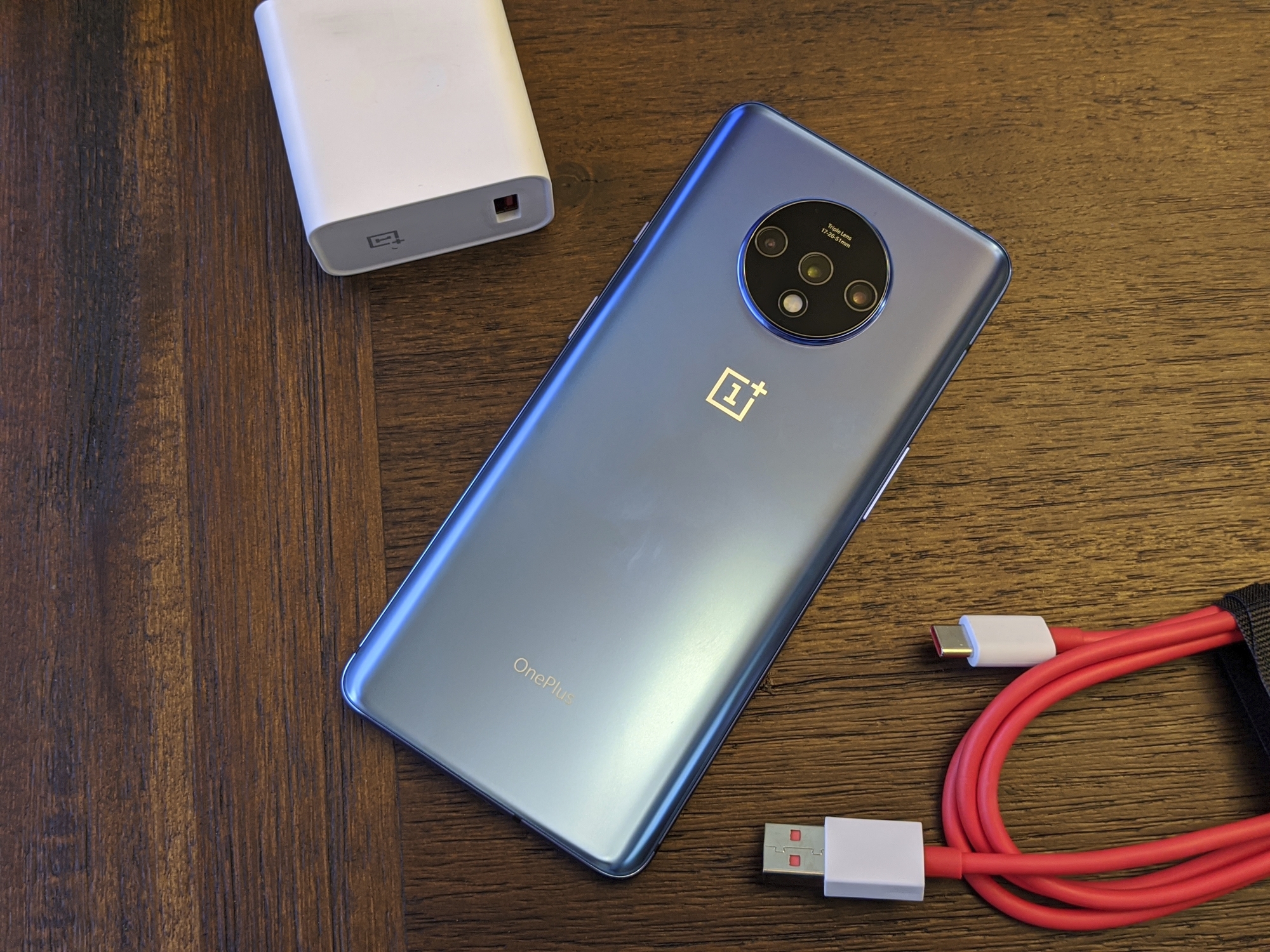 However, I still struggle with the OnePlus as a total package. For the “Never Settle” brand, you still have to make some choices. While this is somewhat true with no one making a “perfect” Android phone, the struggles of the camera, lack of Qi charging, and the background apps issues are enough for me personally question it as a daily driver.

Much like battery life, personal usage and preferences play a huge role in consumer choice of smartphone purchases. Despite its issues I have, the OnePlus 7T is one of my favorite devices of 2019 and deserves to be on your shortlist. Many users will find this a great value option for their next Android device.

You can purchase the OnePlus 7T from the OnePlus website for $599. It’s also available at T-Mobile and Gearbest.