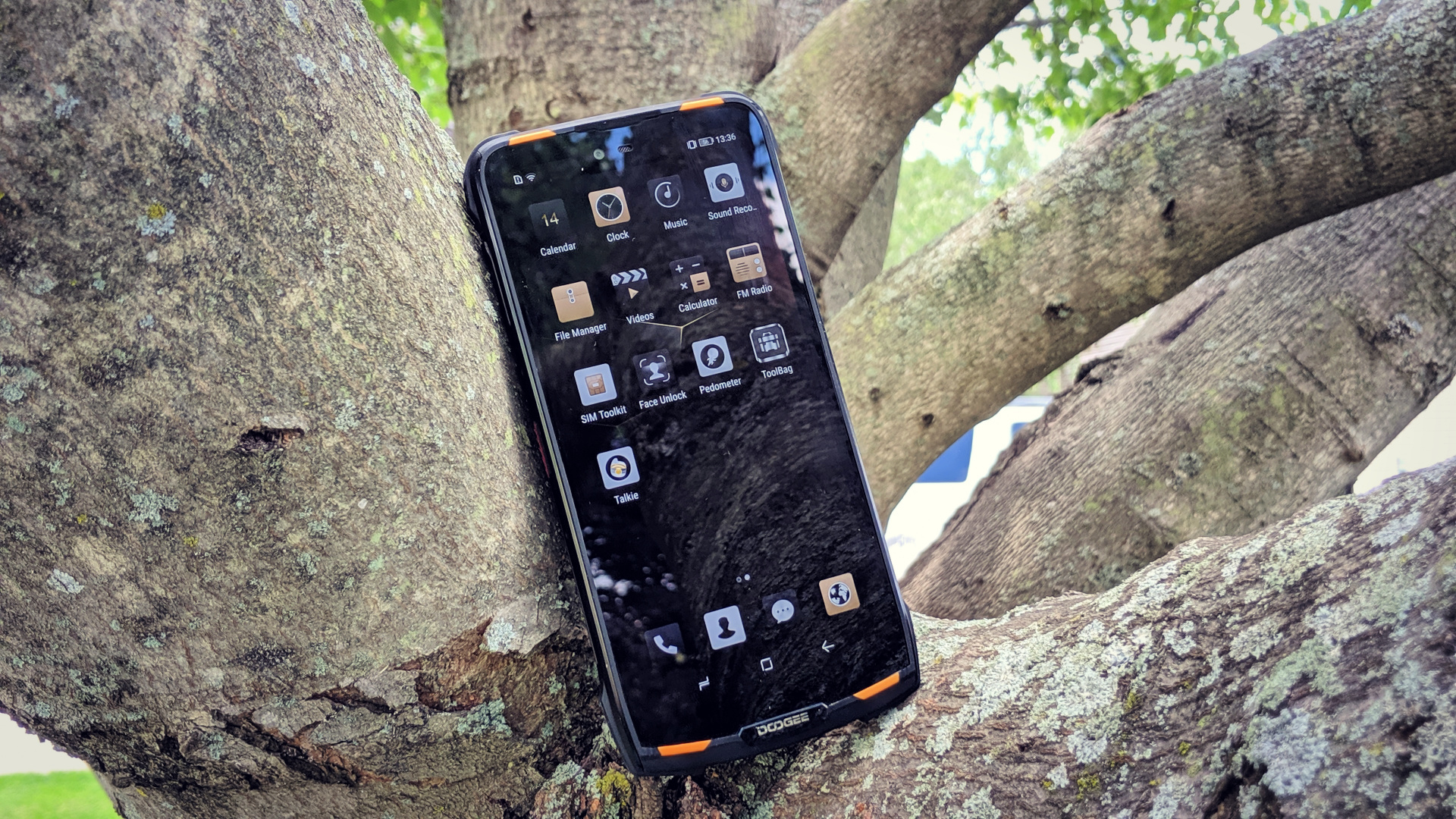 What constitutes a flagship phone experience in your eyes? We can ask that question to ten people and get ten answers. Everyone has their own preferences and ideas and there’s no magic pill for the entire industry.

Generally speaking, when we think of a “flagship”, our mind goes to the best of what’s available in its particular space. For phone consumers in the US this conversation is often centered around the Samsung Galaxy S, Galaxy Note, Apple’s iPhone, and the Google Pixel.

While these may be the big names and some of the best in the industry, we’ve also got products from LG, Motorola, and other brands. Each of them has a flagship device, even if it doesn’t compete in the larger landscape.

Chinese manufacturer Doogee has a new phone which looks to wrestle its way into the conversation. It’s big and powerful, rugged, modular, and runs a semi-current version of Android. Indeed, the Doogee S90 reads like one of the most powerful devices on the market but at a fraction of the price of the “big boys”.

Powered by Android 8.1 Oreo, the Doogee S90 has a 6.18-inch display with a cutout notch and a 16-megapixel/8-megapixel rear camera combination. Around front is an 8-megapixel camera.

Internally there’s a MediaTek Helio P60 processor (up to 2GHz) with 6GB RAM and 128GB storage capacity. Need more room for media? Add in a microSD card up to 256GB for photos, videos, games, and more.

The whole thing is wrapped in an IP69K protective coating and meets US military standard MIL-STD-810G rating. It’s not going to withstand water and dust, but also extreme temperatures, shock, humidity, vibration, mold, and even steam.

With rubber flaps and a strong shell, there’s no mistaking this one for a premium device that can be dropped. Gorilla Glass 4 keeps its screen from scratches and scuffs. In other words, it’s designed to go anywhere you do and take a beating in the process.

What about battery, you ask? How does a 5,050mAh power source suit you? It’s bigger than pretty much anything else in the space and offers 10W wireless charging, too.

How about adding in another 5,000mAh worth of battery? Yep, this is a modular phone, similar to the Moto Z line, and it comes with a second battery that can snap on in a moment’s notice. Once on, you’ve got more than 10,000mAh of power, or nearly three times what you’ll get from your more familiar brands.

Make no mistake, this is not the phone you carry if you’re hoping to impress people with your taste. Aesthetically, the Doogee S90 is chunky, clunky, and feels like it’s designed for utility workers, contractors, and plumbers.

The phone is thick, even by itself. Snap on that magnetic battery or any other module and it gets doubly wonky. Then again, it’s not really any worse than carrying a 5,000mAh portable charger with you. It’s actually better because it won’t go anywhere and you don’t have to worry about cables.

There’s a certain charm to the phone, thanks to the textured rubber and orange accent colors. It doesn’t go a long way to make the phone feel sexy or anything, but it does give it personality. At least as much as one might expect in a phone built for blizzards and dust bowls.

It’s a hefty phone, to be sure. In an age of uber-thin handsets with tapered edges and premium materials, the Doogee S90 is anything but those things. 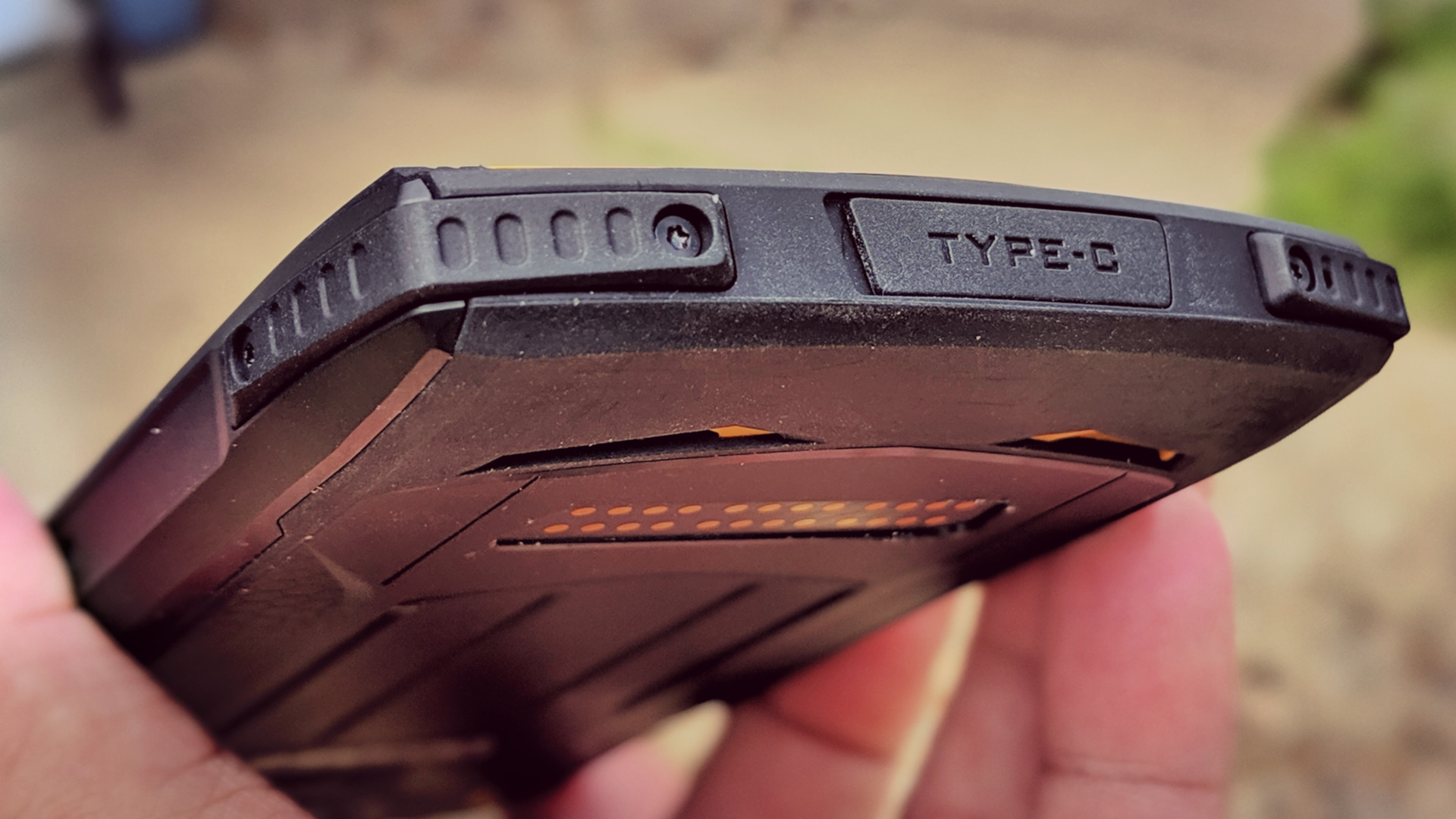 We can appreciate the rubber and plastic shell that houses the phone, and even the idea of the flaps to cover ports. In practice, though, it can get a bit aggravating to fuss with the USB C cover or the SIM slot. To be fair, there’s more room to plug in the charging cable than we’ve seen in other rugged devices.

The rear dual-lens camera is an interesting design choice if only because of how far it appears to just out from the phone. We can easily imagine this getting scuffed and scratched over time.

A dedicated button on the left lets users define its usage. Choose whether you want to launch an app, flashlight, or something else in single, double, and long-press actions. 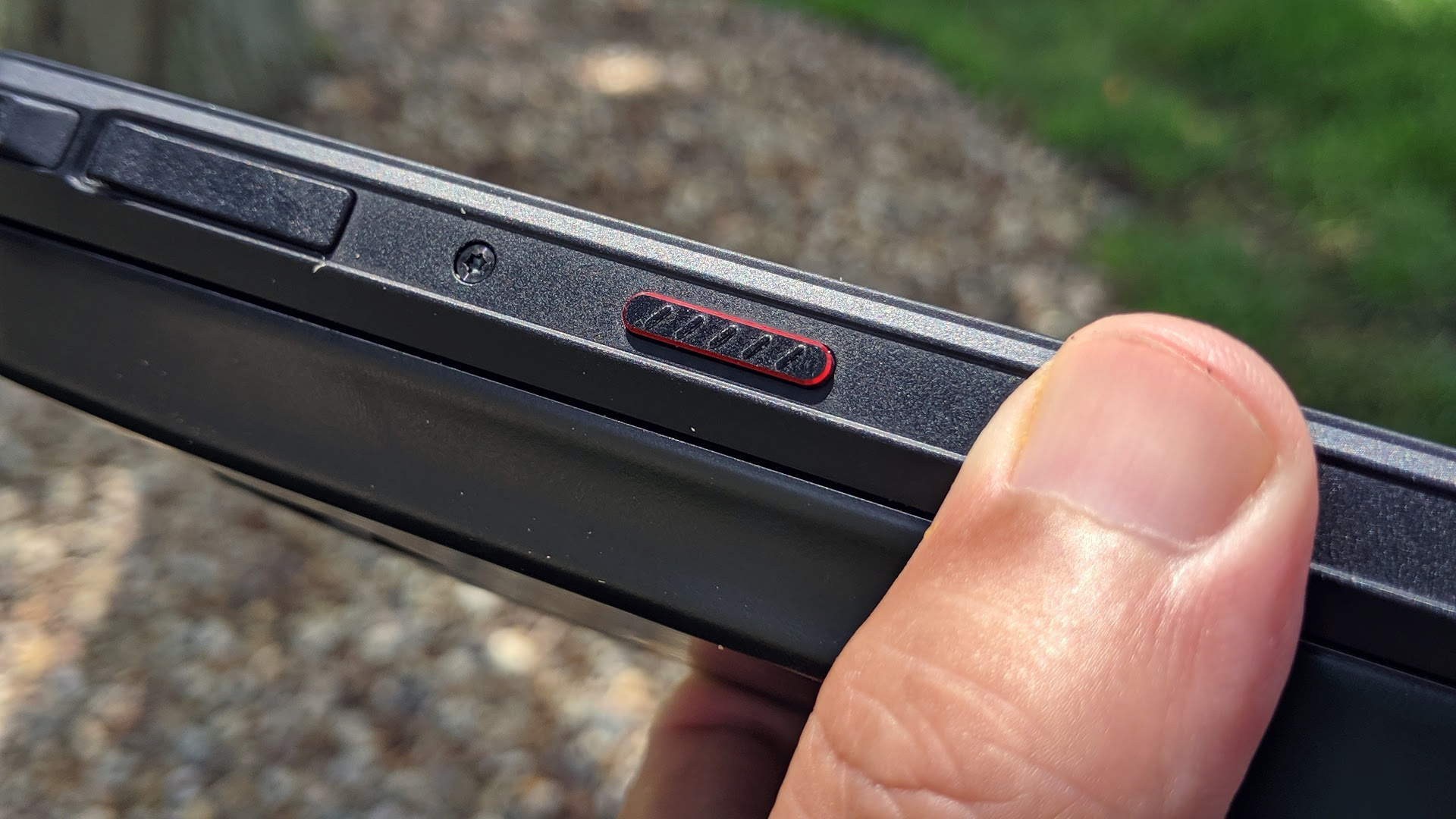 Doogee makes a few assumptions as to the target user base and installs some apps it thinks one might find helpful. A “Toolbag”, for instance, acts as a folder of sorts, and reveals tools such as compass, height measure, protractor, barometer, plumb bob, and more.

Aesthetics-wise, we can’t say we love the color palette and “feel” of the experience. The system itself uses grays, blacks, and golds with a specific, skeuomorphic iconography but everything else gets its own app icons and widgets. To say that they clash with each other is an understatement. What’s more, none of the actual apps match the design.

The software is okay, if not ugly, but we’ve seen far worse in the area of pre-loaded apps and games. There’s overlap with browsers and galleries and other small stuff but a custom launcher could fix all of this.

How does the Doogee S90 perform?

A few years back the general trend in rugged phones was to focus on the outside as opposed to the inside. In other words, specifications would often be a generation behind the higher end models.

Things have changed over the years and the Doogee S90 not only keeps pace with other models, but its specs put it on the upper end of the spectrum. It’s refreshing to have a phone that has this much power in it with such a level of durability.

We’re at a point in phones where everything new feels snappy and responsive out of the box. With that said, we added a couple of accounts to the phone, threw a few games at it, and pushed it about as much as we would any other review unit.

It generally takes a few weeks or so to really settle into a groove with phones, and to be fair, we didn’t use this as a “daily driver”. For our tastes it’s just too big and heavy, but that’s only personal preference.

The MediaTek Helio P60 processor (octa-core 2GHz) is plenty fast and the 6GB RAM goes a long way to helping with a fluid experience. When we consider the target demographic (plumbers, contractors, utility workers, etc.) we can’t imagine them asking for more.

Our review model came with the extended battery and a second box with a night-vision camera. These proved to be easy to snap on and they largely stay in place without problem. 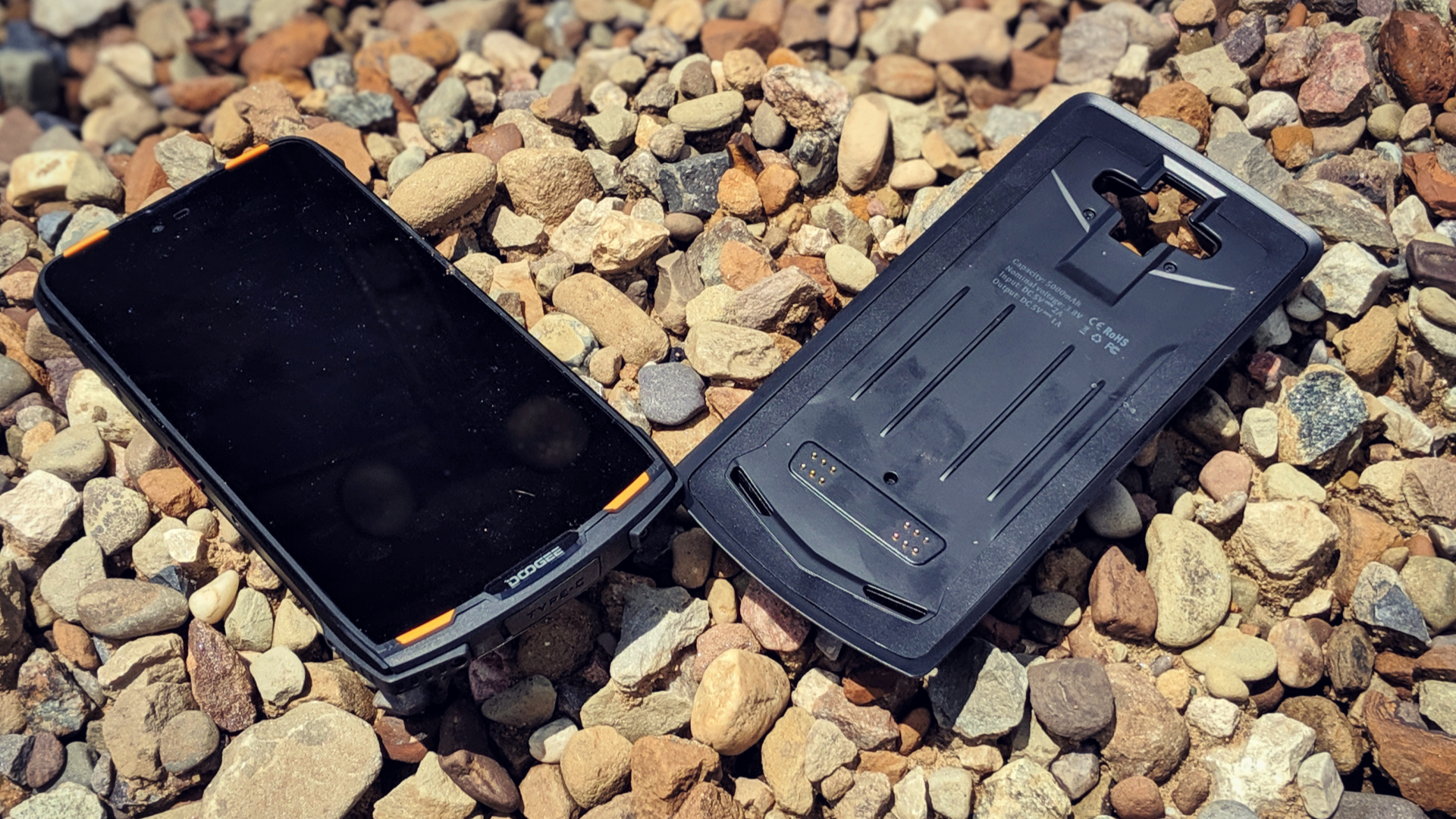 Battery life was incredible, of course. The 5050mAh main source was enough to get us into two or more days of casual usage. Snapping on the secondary battery essentially doubles this, stretching things out to nearly a week’s worth of use. Real world results will vary based on the user, but a carpenter ought not worry about running out of juice halfway through his week.

The phone we were sent had some (literal) rough edges around the area where the module goes on. It was not present until after removing the protective film but it is sharp and unsightly. Were this one we purchased, we would have immediately returned it.

The first time this thing falls to the ground it will pick up a scuff, but we just prefer to put our own character on our products. Nevertheless, you don’t see it if/when a module is on the phone.

Is the Doogee S90 worth buying?

We really like the overall package of the S90 but it’s not without a few issues. It’s easy to pick at the seams and find hangups, but that’s not exclusive to this phone. Taken as a whole, there’s a lot to admire in the handset — and we’re not the demographic Doogee has in mind. 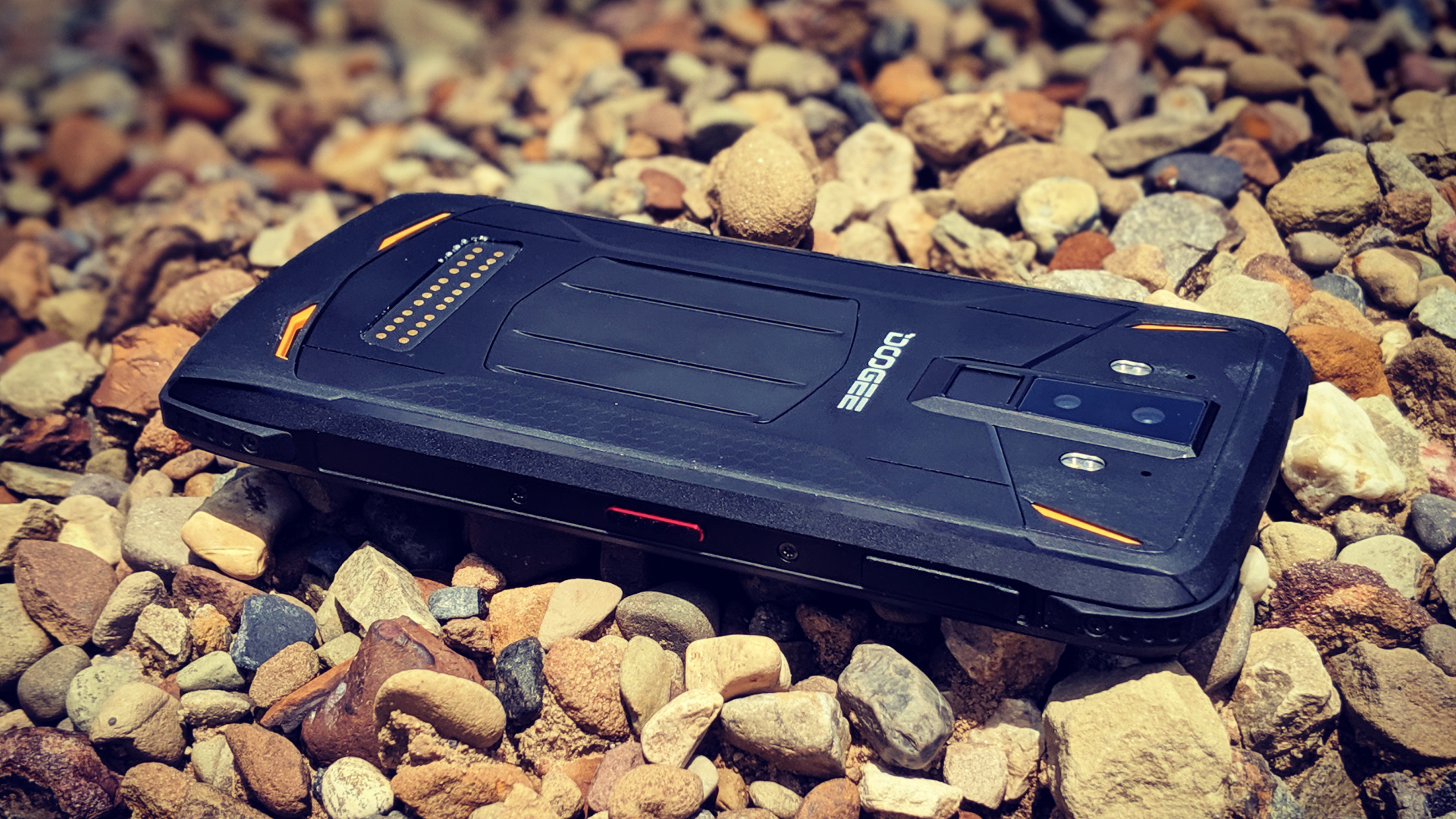 The Doogee S90 is a phone that’s tougher than nails and built to perform, two things that are stronger than the sum of its parts. It also helps that it’s cheaper than one might expect.

The concept of modular phones is an interesting, if not potentially worrying one. Motorola has found a way to keep its Moto Mods going through four generations now, but Doogee is a different brand.

Will Doogee keep things in house for future models or might it open the door to other companies? What happens if this phone doesn’t sell as well as it hopes? Does it shutter the line unceremoniously? These are the sort of questions one might ask if considering the Doogee S90 because of its modular capabilities.

The Doogee S90 picks up where the Samsung Galaxy Active line ended and competes against other rough and tumble models like those from Kyocera or CAT.

US buyers might proceed with caution as network compatibility isn’t guaranteed for your carrier. While it does support many 4G bands, it may not provide you with all of those offered by your current provider.

You can learn more about the Doogee S90 at the Doogee website where it’s available for $300. For your money you’ll receive the phone and the extra battery. Opt for the $400 bundle and you’ll also get night vision camera, extra battery, walkie talkie module, and a carrying case.