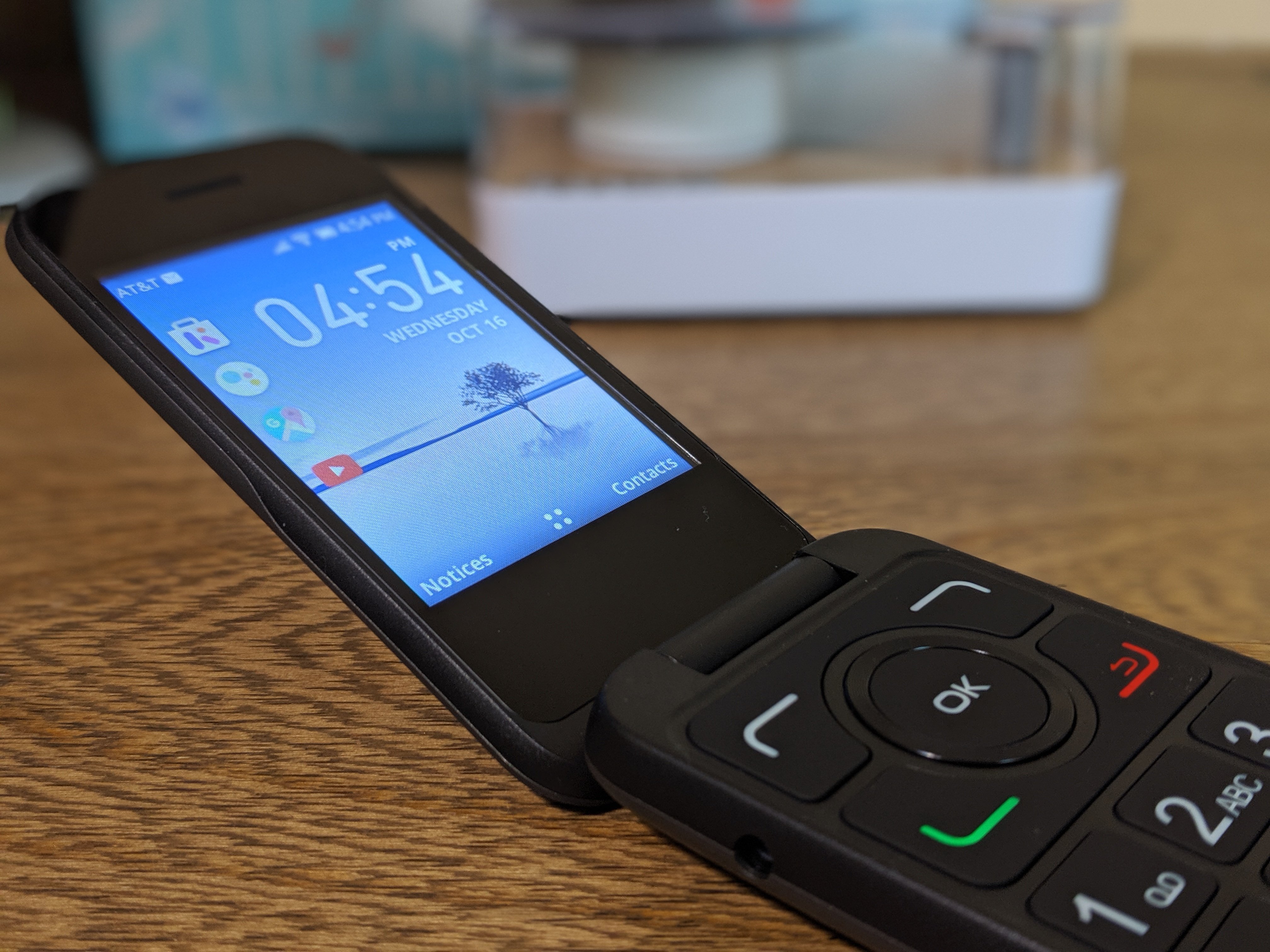 Up for review today is a flip phone. Yeah, you’re reading that right. Recently, our Alcatel rep asked if we would be interested in reviewing its latest, the KaiOS-powered flip phone: The Alcatel SmartFlip on ATT. It’s a mouthful of branding, to be sure.

How does the phone fare in a world dominated by “smarter” devices? Here’s what we thought of the Alcatel SmartFlip.

Well… it’s a flip phone. The overall engineering behind the SmartFlip will not catch anyone off guard. It’s a throwback body with a slightly updated engine. It’s made of plastic and looks like it would take a beating. How easily we have forgotten that a phone could take bumps and drops in stride when not wrapped in precious metals and glass.

You’ll find a small 1.44-inch display on the outside (I’d almost forgotten these have “window” screens on the outside cover). Once flipped open, the SmartFlip has a slightly larger 2.8-inch LCD. Neither are overly impressive with a 128×128 pixel resolution on the outside and 320×240 resolution inside. 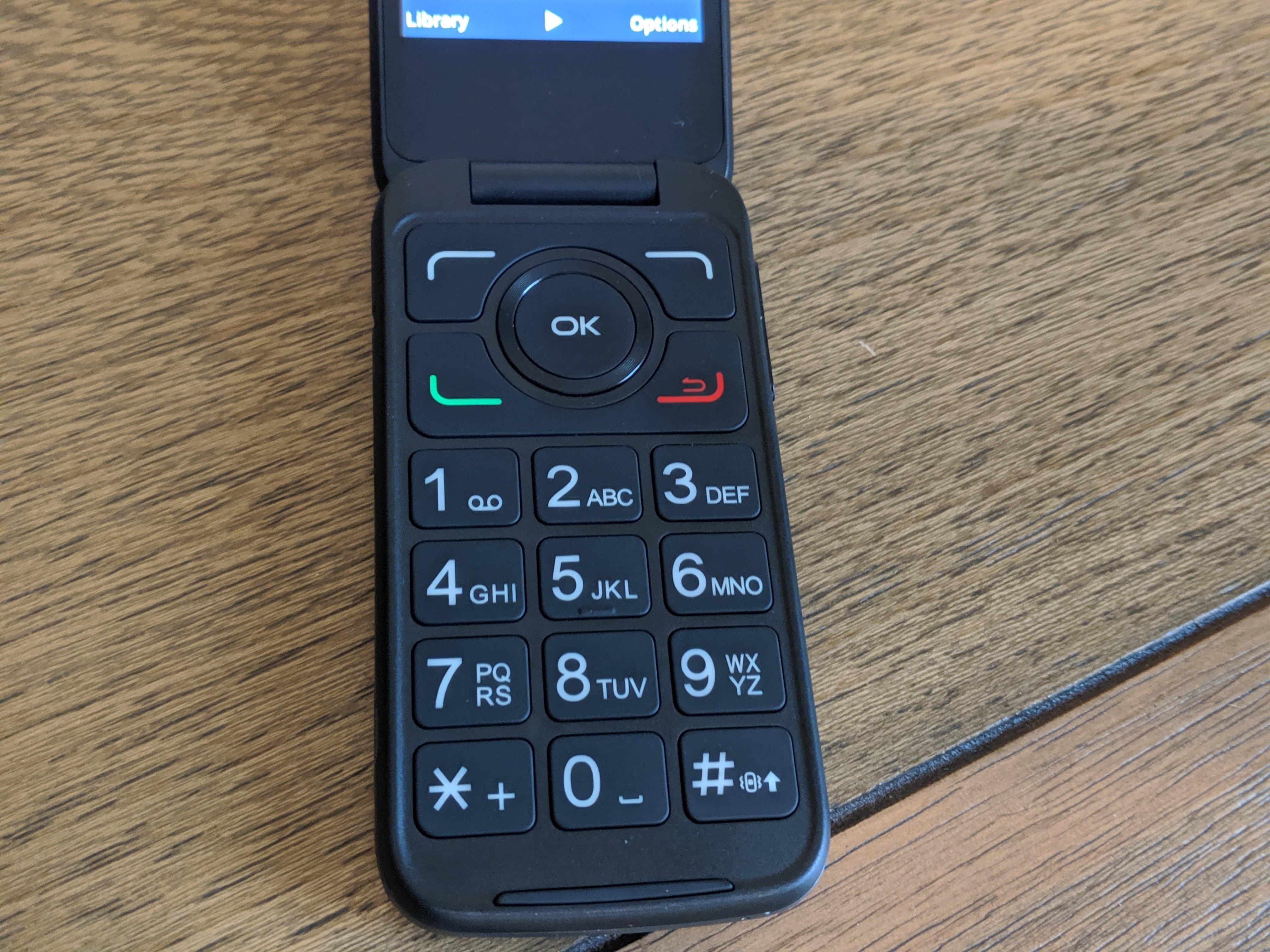 The first real positive is the large, tactile keys. These are big and have a satisfying travel when pressed. It hearkens back to a time when feedback was a physical thing you could see; I found it quite pleasing.

Above the number pad, you have an answer, end call/power button, a centered OK button for selecting menu items and two travel buttons flanking it on each side.

Above the outside screen, you have a camera module that we’ll cover in just a moment. On the left of the SmartFlip, we locate a 3.5mm headphone and mic combo for media/calls at the bottom with a micro-USB charging port. Opposite it on the right, is a lone volume rocker.

Taking phone calls on the SmartFlip is a huge deal for the target consumer. This isn’t a smartphone so taking calls is most likely the main selling point of the device. Thankfully, the Alcatel doesn’t disappoint. The phone supports HD calling via LTE, WiFi calling via 2.4GHz support, and also falls back to 3G or 2G if necessary.

The call quality was really good and conversation on both sides was crisp and clear with little disturbance. I did have one Wi-Fi call fail due to a cluttered network, but I’ve had the same on my Pixel. I’ll blame that on the environment and not the SmartFlip. 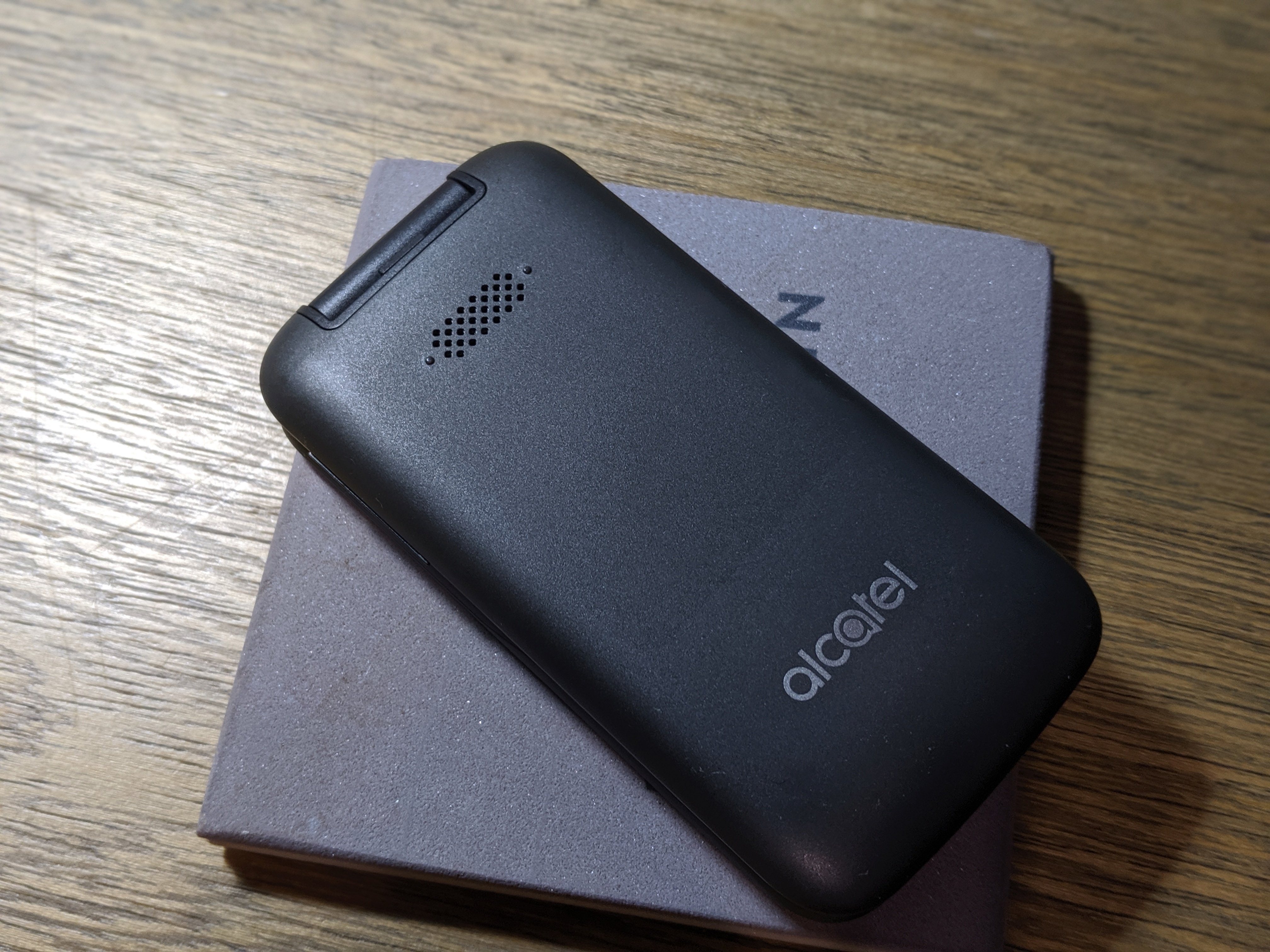 The speakerphone is on the back of the phone and is a very loud speaker. It did get somewhat distorted at louder volumes, but the downward facing design mostly sounded acceptable when used to take a hands-free call.

The performance is surprising. Even with low attentions of a dumbed-down phone, I figured the Snapdragon 210 would show its age. Overall, the SmartFlip is pretty damn snappy.

And then there’s KaiOS, its operating system, and the biggest reason we wanted to test the phone. KaiOS has quickly become the 3rd largest mobile OS by filling the gap between the archaic traditional texting phone and the modern smartphone.

Based off the ashes of FireFox, KaiOS mainly runs HTML5 containers as small web apps. The selection is limited, but you’ll have several base apps that you’ll immediately recognize. On the home screen, KaiOS has default shortcuts to Google Assistant, Google Maps, YouTube, and the KaiOS Store.

Yes, three of the four main apps you see when opening the SmartFlip are Google-owned. It’s this integration that sets KaiOS apart here and it’s well deserved. Google invested $22 million dollars in the company’s success.

Honestly, Google Assistant is one of the most crucial elements of the operating system. You can hold down the OK button and use it much as you would on an Android phone for voice searches and general questions. KaiOS has taken it a step further and made Assistant the voice to text dictation engine for the prompt that accepts text input.

This really relieves some of the awkwardness of trying to use the old T9 pecking of the keypad. If you want to send a quick text, you can simply select the entry box and then let the Assistant dictate the message. The same can be done when searching the web via the built-in internet web browser. It’s a nice touch of modern software that sets KaiOS, and the SmartFlip, apart.

The KaiOS store is kinda lonely, but there are some other notable names you can download. Twitter, Facebook, and WhatsApp round out a few social apps that most people will be accustomed to seeing on their phones.

Worth mentioning here is a small quirk we found in notifications. Not all of them are treated equally on KaiOS. Default selections like texting and emails get a small pop-down shade toast in the UI whereas new items ping the system. However, to see updates in almost any other app requires you to find and open the application.

There is a decent media player client… with one caveat. I was able to play media files via the internal memory of the SmartFlip, but weirdly, I couldn’t get it to recognize the files via microSD storage. The music app does a good job of bringing in the embedded data and media art while playing. Sound via the headphone jack was also pleasant. 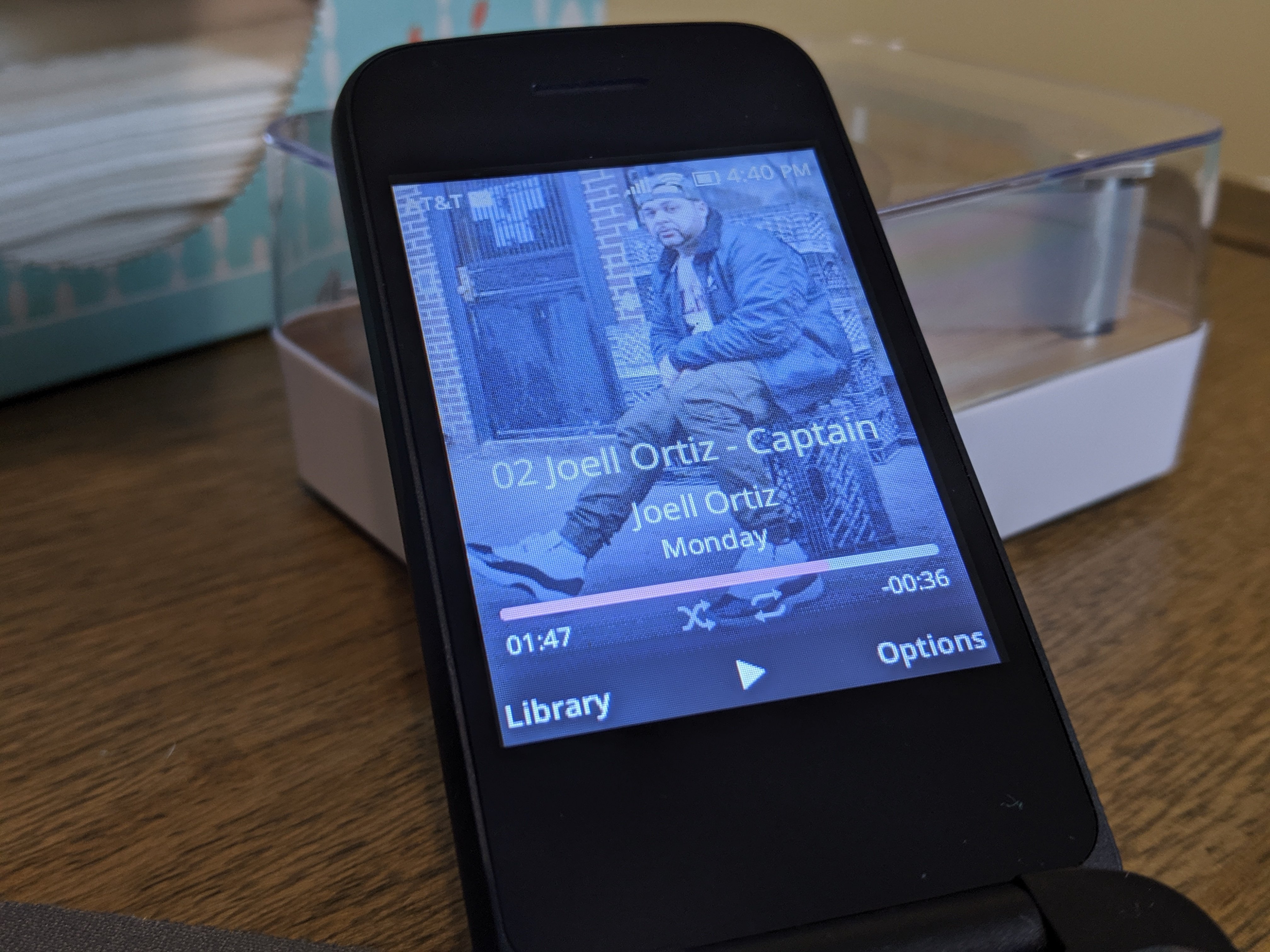 Cutting right to it, this is a 2-megapixel shooter that seems capable of only taking grainy, blurry shots. This is not anything like we get in smartphones, guys. Let’s not pretend that it’s something it most definitely is not. You can take a photo when necessary but that’s about all there is to this portion of the SmartFlip.

There’s also no selfie camera, but even if there were one, what would you do with it on a flip phone?

I can still remember back to the days when my Motorola RAZR would last me a full week on a charge. The Alcatel SmartFlip doesn’t quite meet that mark, but it did last me 3-4 days of general use. The seemingly tiny 1,350mAh battery can easily stretch out enough to take care of most consumer’s needs to where they only need charge twice per week.

The nostalgia of this phone is undeniable; however it’s built for a certain user base that Alcatel stills sees as viable in today’s market. I enjoyed my time with this device and would easily recommend this to my parents who will never fully use a smartphone. The Alcatel SmartFlip is available on ATT for $59.